With staff testing champion Dan on holiday in Sri Lanka, four eager home chefs saw their opportunity for a big prechristmas staff testing win. Maria won and here are the results of their endeavors...

I was very curious to try this recipe from Myanmar as some friends just moved there and they always mention how brilliant the local food is. Preparing this recipe at home was very exciting as the list of things to buy included ingredients as fresh coriander and tropical fruits which I love so I had great expectations from the beginning. 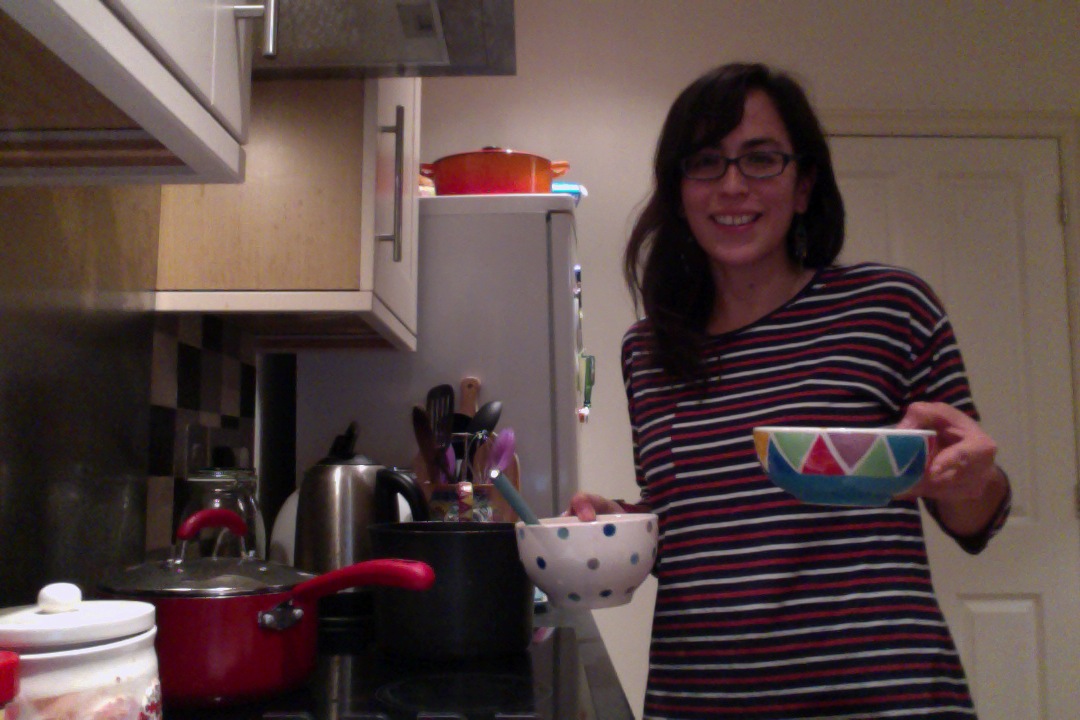 The chicken curry contains one of my all-time favourite chillies - Kashmiri chillies, their flavour is great and I love the oily, spicy taste that it gives. The side dishes on this recipe are very unusual. One contains crispy, fried onions and garlic, and once the spices have been added the whole living room started smelling incredible. Preparing the tamarind aubergines was great as it is very easy. It has an unusual flavour, which is neither sweet nor savoury sweet. The salad was great as it had lime, radishes and coriander and just the thought of that combination brings great memories! Also, it is very interesting to try a recipe from such a hot country like Myanmar in the middle of winter! Adding lime to the curry before serving it gave the dish that extra tangy touch!

The dessert was a perfect combination of freshness and sweetness. I used mango as it is my favorite tropical fruit plus it was on offer so I ended up buying too many. Having chillies and sugar in one bowl again is very unusual but I loved the surprise. This meal has definitely inspired me to visit our friends in Myanmar soon!

With (I suspect) my Italian grandfather turning in his grave this month I went for an unorthodox pasta dish all the way from Memphis, known as BBQ spaghetti. Pork belly was slowcooked in a rich BBQ sauce, shredded, tossed through spaghetti then served with an array of BBQ condiments including tangy BBQ sauce, jalapeno pickles, honey butter cornbread, a bacon crumb and coleslaw.

It has to be said that this was BY FAR the most popular meal I've ever recreated at home. The combination of soft, slowcooked pork (I also made a beef version with beef cheeks that went down equally well) with all the condiments kept the compliments flooding in until the following week! There was also an offer of professional photos to be taken on the next home testing escapade so no longer will you be subjected to my horrendous photographic skills.

I thought I’d go for something a bit out of my comfort zone this month, the valentine’s lobster masala and mango and saffron sorbet. This being my first attempt at lobster I wasn’t sure what to expect…

It took a few google searches to work out how to cut up the lobster, but after that, the rest went very smoothly! The sauce was simple to make with an amazing buttery result. We were both very pleased! In fact, we loved the sauce so much we made it again the next day, but used prawns instead.

This was all accompanied with a side of Asparagus Subji which was delicious and easy to make. We then topped off the night with a mango, chilli and saffron sorbet, and cardamon shortbreads, which, as you can imagine, went down a treat.

As a whole, this was a very impressive and tasty spread, and we both had a wonderful evening!

Being a big fan of both keema matar and burritos I was pleased to hear that they have been combined into a sort of super group of meals. Consisting of mostly condiments it was a very easy meal to prepare and cook. The keema just does it's own thing on the hob while I fussed around making the various dips and dabs to go inside the burrito.

The yogurt/guacomole is now my #1 favourite dip, super easy to make and very tasty! The only thing I didn't like was my burrito rolling skills. They're awful, it was more fajita than burrito. 10/10 would eat again.