Written by James
Published on 23rd October 2015 at 10:25 • No comments yet, be the first!
Here we are hard at work again testing recipes from home - this month there were a few burned bits and a fritter disaster, but still we ...curry on... Matt - recipe developer - Dhansak (Indian Restaurant Favourites sub) I'd tried the Dhansak a few times at work and was interested to see how it went with my three young daughters. They all really enjoyed it and each of them were able to put together their own dinner from the different components, which they really loved. Children seem to appreciate a having sense of autonomy when they eat, as well as showing off their individuality! 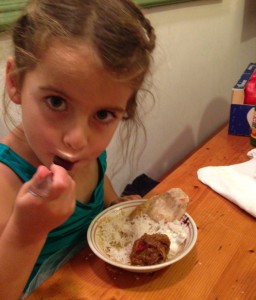 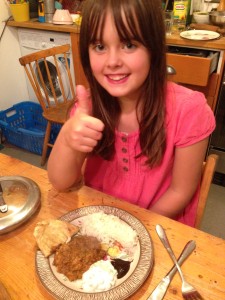 The parantha was a real hit with them all, and my eldest was a big fan of the tamarind chutney, while the youngest spend a bit of time finishing off every last bit of the rice. 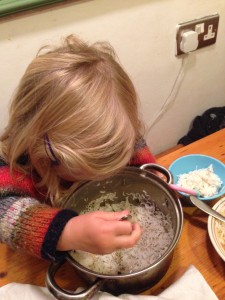 It was really easy to put together, though I did cheat slightly by putting the actual Dhansak in the slow cooker I got for my birthday recently. Grace, Ivy & Dorothy (aged 8, 5 & 2 loving the Dhansak!) Chris - technical manager - Pasanda Night (Indian Restaurant Favourites sub) 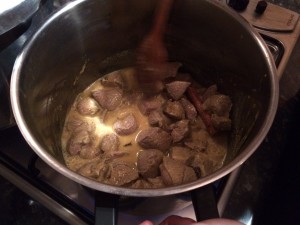 The IRF Pasanda was a tasty curry, one that I'd had my eye on since we tried it in the canteen at work. It took us just over 2 hours of cooking time, mainly due to the lamb not being tender enough after an hour's cooking, and it was one of the less difficult curries we've cooked. 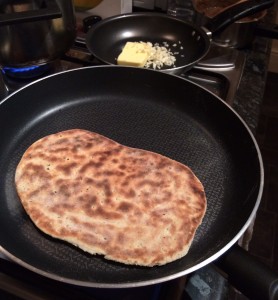 Though I managed to kill my yeast and ran out of yogurt for the naans, the curry was a delicious success. 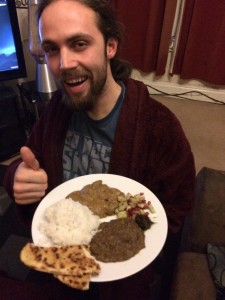 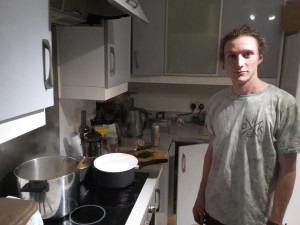 However with only two people eating a four person curry the setting was more like a date night, with an extravagant amount of food. As always I took quadruple the time to prep the ingredients but once everything was on the hobs it was plain sailing, well mostly. Leaving the rice bound onions to cook during a not so brief trip to the local corner shop left them rather carbonised! 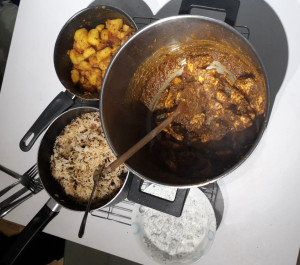 Everything else remained unburnt and we tucked into a extremely tasty balti with plenty left over for Max to have for his lunch, pretty sure his colleagues are going to be rather jealous! 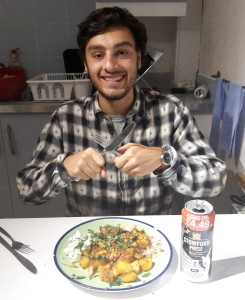 Suze - sales manager - Burmese Noodles/Fritters/Salad WKE Fresh back from travelling in South-East Asia, I decided that a Spicery-funded meal was the best option for having my brother over to dinner. Unfortunately it didn’t go quite as smoothly as planned! Usually I read recipes first, but this one I was flying blind and just followed the instructions as read - straight into Waitrose with the shopping list, prepped all the ingredients beforehand, and off to a flying start. I should really have read it through first! 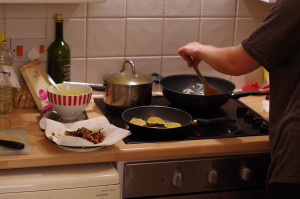 A bit of the proof checking had been missed out, I discovered, which made the process a lot longer than expected due to things not being in the best order. My coriander stems were chopped with the rest of the coriander, so couldn’t go in to simmer with the chicken. 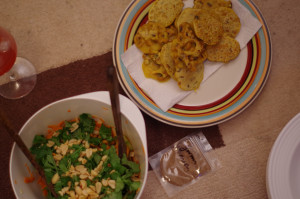 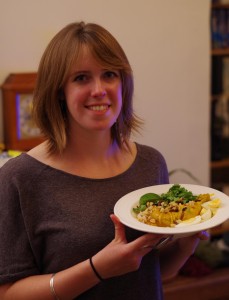 In the end, after a lot of faff in the kitchen and a lot of pans on the go, the main course worked out fine! Great colours. It didn’t exactly wow me, but hey, at least my brother never complains about free food :) 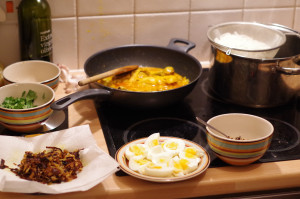 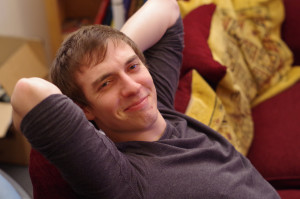 Josh - Marketing Manager - Bengali Mustard Chicken with Pear Chutney, Aubergine Fritters with Aloo Matar Posto FNCD I think I'd missed this one on the staff testing rota at work so was keen to give it a go at home to impress my new housemates (in case you're keeping tabs on my living arrangements from my last appearance in a kitchen blog, then yes, I have moved again!). For once, I behaved like a sensible person and began at the beginning - prepping my ingredients list and making sure (almost) everything was chopped and ready to go. Usually I try and rush things by chopping and cooking all at once but frankly, I'm not that competent a chef. Walk before you run boy. 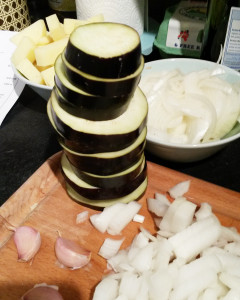 ^ I felt my organised approach deserved immortalising in glorious technicolour. The Prep-asaurus Rex. The rest of the cooking went liquid smooth like it does on the telly thanks to my prepped veg and glamorous assistant on aubergine fritter duty.  Annoyingly for my ego, it was the fritters that were best received by my dining companions with that magical sprinkling of Chaat Masala making them extra delicious. The pear chutney was also pure joy. I couldn't get hold of full fat yogurt for the curry which I felt made for a slightly watery Mustard Chicken centre piece that couldn't really cut-the-mustard (oh dear. I'm so sorry) vs the Aloo Matar Posto which had a lot more flavour. In the words of my father, 'if it's fat free it must be rubbish'. Preach. 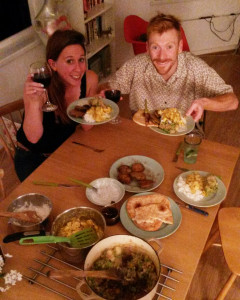 Spilling the Sonoran beans on recipes you may have missed!

Read all about our ups and downs at Spicery HQ last year!