Written by Alice
Published on 6th April 2016 at 12:27 • No comments yet, be the first!
Jess on Date Night in Hanoi; This has been my favourite Spicery Date Night in a while ... I had quite a busy evening of telly lined up so thought I would prep a bit ahead and turns out you can pretty much prep the whole thing in advance which definitely makes for a more relaxed Date Night!
To start there was Nem Lui Hue, little pork balls, squeezed onto lemongrass skewers.  I made the meaty mix and left them on their skewers for a good few hours before cooking so the flavour from the lemongrass was even stronger and made the balls (which I would normally associate as stodgy) seem fresh!  These are served with a refreshing salad.  The recipe calls for grapefruit but the supermarket was out (!) so I opted for ripe mango and added a little extra lime juice.  The salad complimented the skewered meat and made for a fresh and appetising starter!
The main is a simple fish and noodle dish, Cha ca Thang Long.  The fish is fried in turmeric (think of the health benefits) and served over herby noodles.  Again, light and fresh and incredibly delicious! The flavours are quite subtle which does allow for the fish sauce to take over a little bit but as long as you're comfortable with fish sauce, you're fine!
Both starter and main were coated in amazingly delicious chilli peanuts, something I now cannot stop making.  They are easy and unbelievable.  Even if you don't like the meal much, learning how to make these nuts makes up for it!
A fresh and light starter and main allow for a slightly more indulgent pudding and that is taken as gospel with the Date Night in Hanoi's dessert.  A bread and butter pudding made with croissants and fruit. This dessert is seemingly a bit out of place after the authentic starter and main but Vietnam as a huge French influence, making this the ideal dessert.  I used mango (instead of the suggested banana) because I had bought a two pack for the starter (!) and bananas are gross and opted to go one step more decadent and use pain au chocolat.  I gave the puddings a little longer in the oven to really let the tops crisp up and, served with a wodge of vanilla ice cream, they were perfection.  I would suggest leaving them in the oven until the rise (a bit like a souffle) and crisp up so you get the caramelised texture on top and the lovely soggy mixture at the bottom!
Hanoi, when I was there 8 years ago, was awash with colours, smells and amazing food.  This took me straight back! 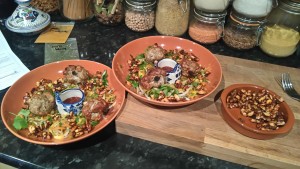 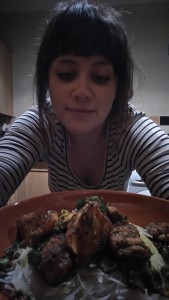 Robyn on Korean Tacos;
After my trip to America and my hunt for K-Mex in LA, it was only right that i got to test out the new Special Edition LA Korean Tacos kit for my staff testing.
This Spicery version consists of Korean marinated beef strips, kimchi fried rice, pickled onions with black sesame seeds, a homemade sriracha flavoured with the smoky Mexican chipotle chilli, all wrapped up in flour tortillas. Yum! I did cheat and used a packet of precooked rice for the fried rice to save a bit of time, it seemed to be fine. The bulgolgi was so easy to do, its definitely going on my list of things to do again. Sticky sweet fried beef strips with toasted sesame, what's not to like? I didn't think it was possible to make Kimchi in half an hour but boy was i wrong! It tasted almost exactly the same as the Kimchi i had walking the streets of LA all those months ago. The chipotle sriracha sauce was hot but had a lovely smoky taste. I must admit i did have the sriracha sauce bottle in the fridge if things went wrong! My other half actually went as far as to say this was even better than any of the Korean tacos we had in LA! High praise indeed! 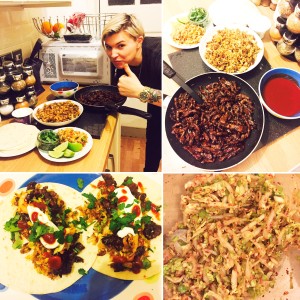