Keema matar (mince with peas) is the spiced up Indian version of traditional mince and onions or bolognese! The dish is a good example of the ancient principles of Ayurveda, and the medicinal value of spices incorporated into Indian cookery. The savoury lamb, hot chilli and the sweet pungent spices, (cinnamon, cloves, green and black cardamon) all balance each other, creating a harmonious dish said to provide a warming effect on the body, aiding digestion of the meat.

The kathi roll, which hails from Kolkata (formerly Calcutta) in Bengal, consists of a bread on which a thin omelette is cooked then the whole thing is filled and rolled up like a large fajita. Kolkata has a significant Chinese population so we've filled our version of the kathi roll with sticky Sichuan pepper and chilli chicken, a fiery chilli sauce and a turmeric and nigella raita with a traditional Chinese stir-fried pepper and potato dish known as di san xian on the side.

Glad you enjoyed it! Happy Spicing! 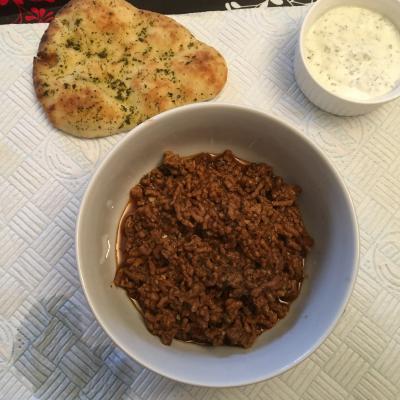