Proponents of turkish cuisine will argue that there's so much more to the country's food than kebabs and Turkish delight, but for a fair and balanced review of top tastes on our recent trip to Istanbul we thought it best to get down to business and just sample everything. We planned our short break around breakfast, lunch and supper, interspersed with the Turkish equivalent of elevenses and afternoon tea, and a few more snacks in between. There are so many delicious things to try that we barely scratched the surface, but here are some highlights: 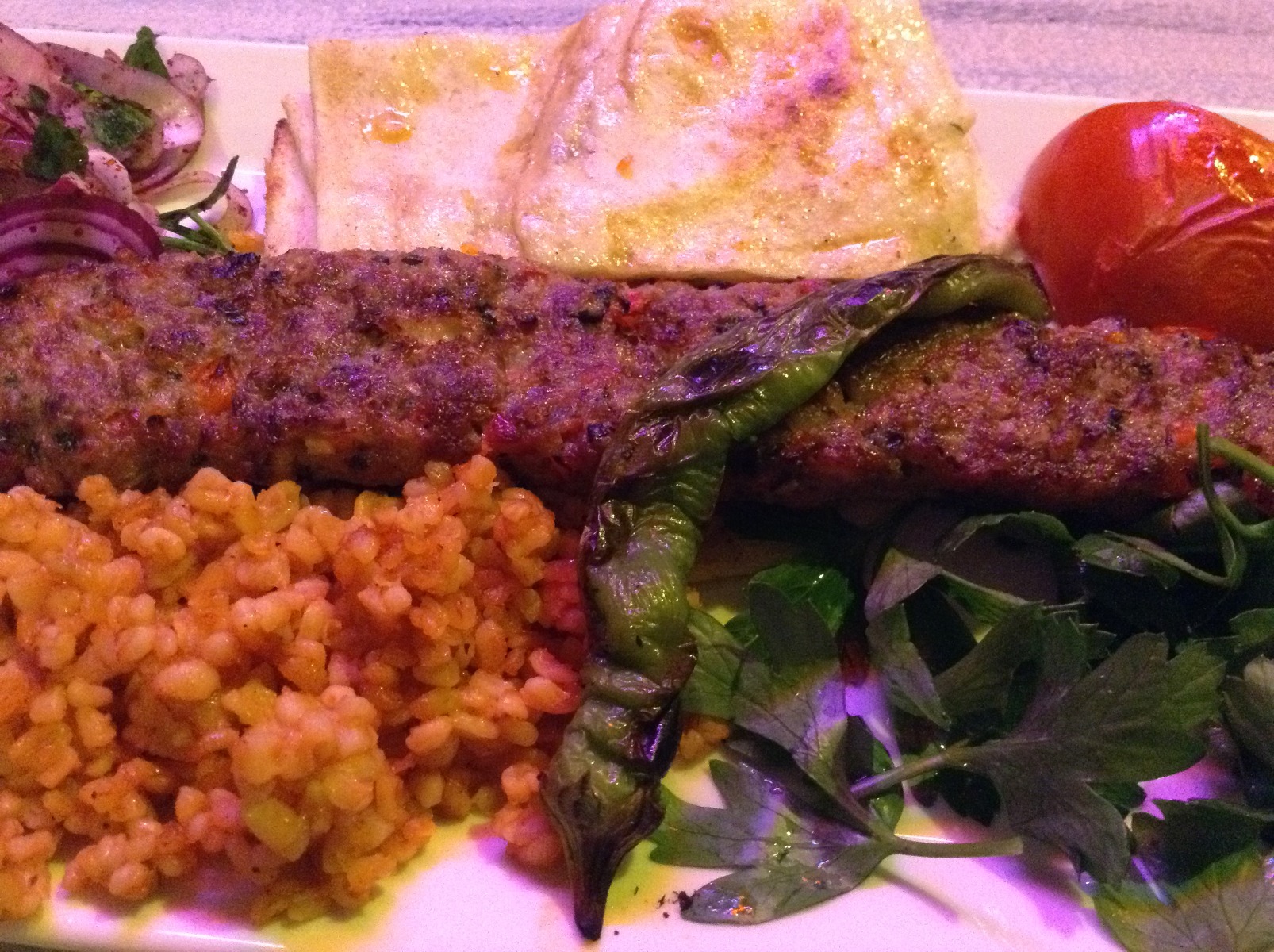 That's kebabswith a 'p'. It seems unfair to base all opinion on this most famous Turkish export on the occasional 3am stumble into your average British kebabhouse, so we set off on our first night in the city to find a kebapjoint. There's nothing quite like the smell of lamb roasting over a charcoal fire to revive an airplane-food jaded appetite. We tried urfa kebabs spiced with urfa chilli flakes, cumin, paprika and oregano, and also adana kebabsspiced simply with aleppo chilli flakes, all served with amazingly fresh tomatoes, grilled chilli peppers and a classic red onion and sumac salad, and a fantastic, thin and buttery bread called lavash to wrap everything up in. 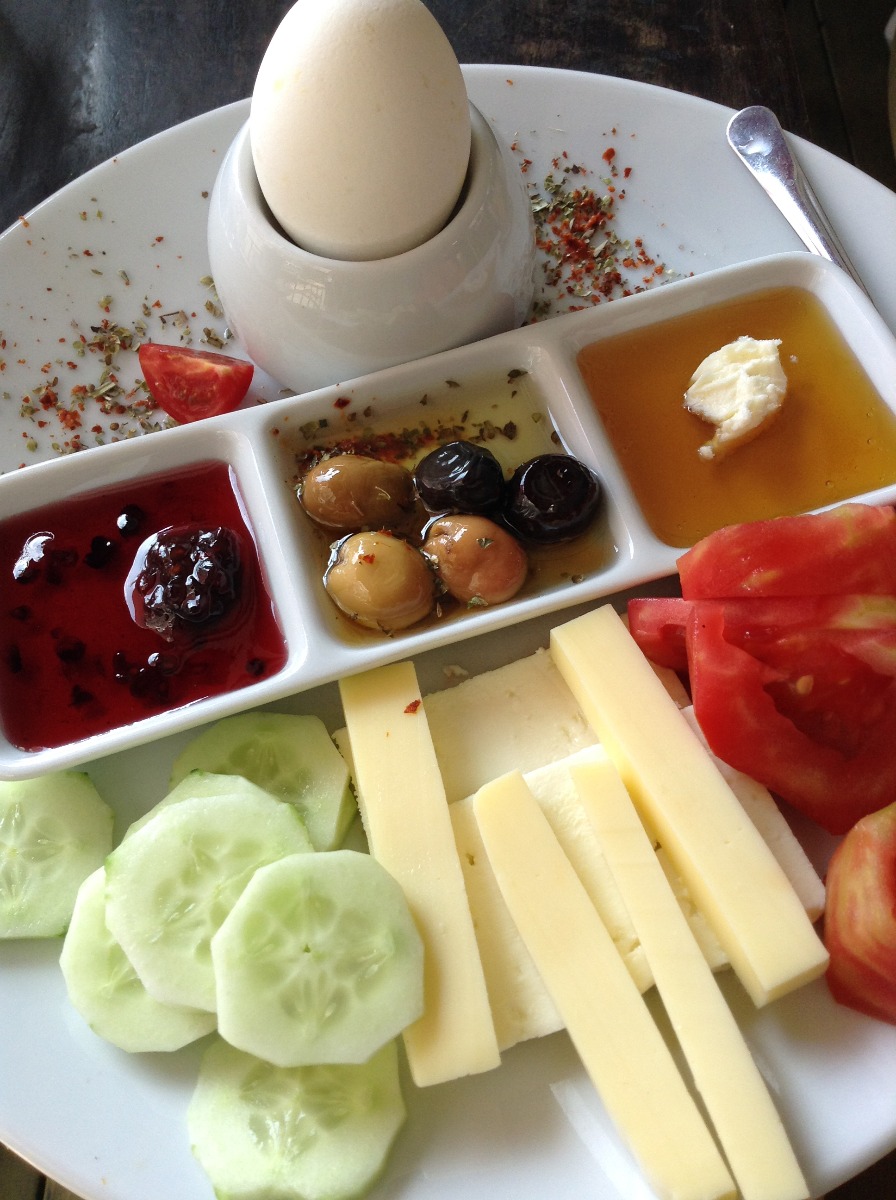 A proper Turkish breakfast is a real feast, it's like a three course meal all neatly arranged on one plate. This one was a real picture: the jam was made with mulberries, the olives were nicely spiced with a bit of chilli and thyme, and there was a dusting of aleppo chilli flakes and oregano to dip the bread and white cheese in. This goes very nicely indeed with a treacle-thick Turkish coffee, just remember not to finish the cup - it'll be half filled with coffee grounds! 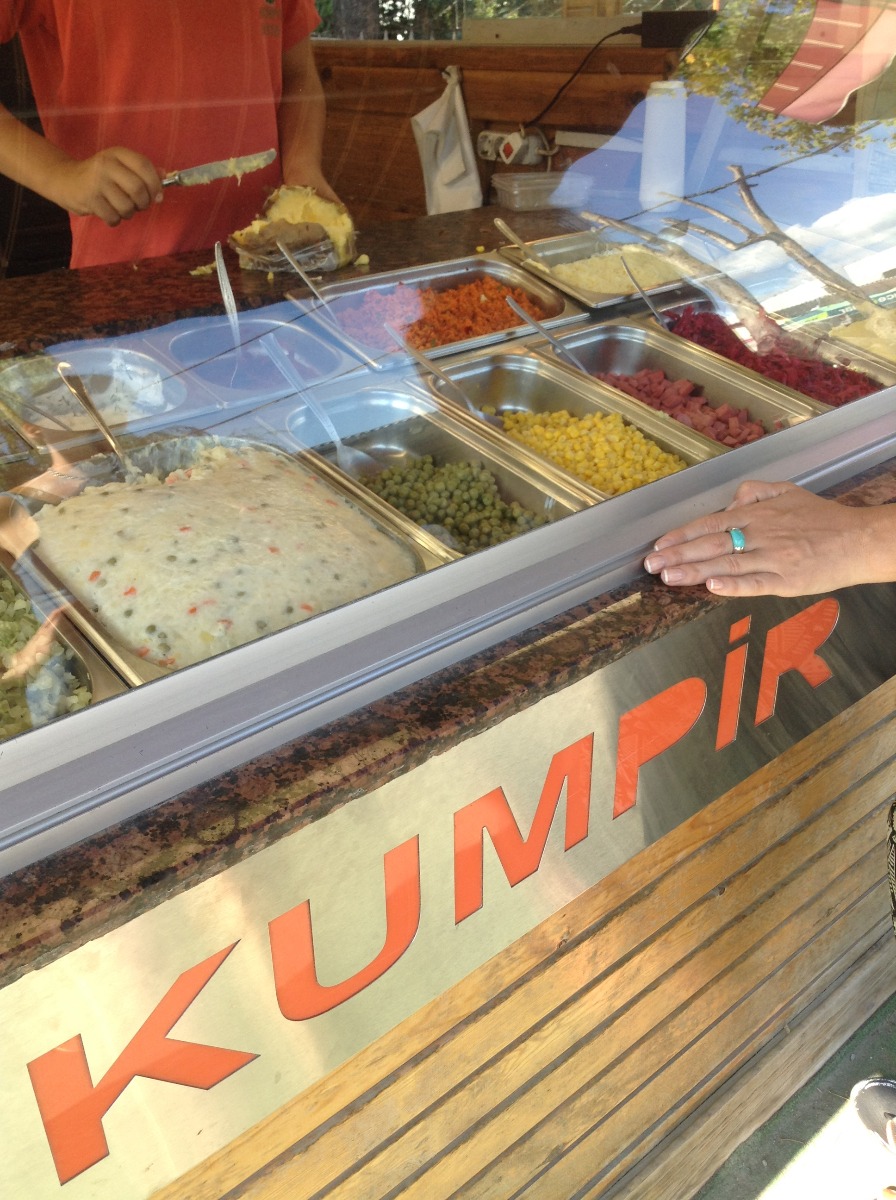 Kumpir is probably one of the heftiest street-foods you'll ever eat, and offers seriously good return on your lira. Potatoes weighing upwards of half a kilo each are baked in a proper wood-fired oven until crispy on the outside and beautifully soft and fluffy inside. Then comes the magic - the kumpir-maestro deftly slices the potato in half, adds a very generous knob of butter and a pile of kasar cheese and starts to mash and squidge everything together with a knife. This mesmerising process continues for a good minute or two until the 3 ingredients are well and truly, gloopily combined, giving you plenty of time to decide what toppings you'd like, including slices of hot dog, sweetcorn, peas, olives, pickled beetroot and other vegetables, and a bulgar wheat recipe called kisir in case you need a double dose of carbohydrates. The 'toppings' pretty much double the size of the potato and are then topped off some more with a choice of chilli or garlic sauces and mayonnaise. Allow time for a post-Kumpirstroll and/or afternoon nap. 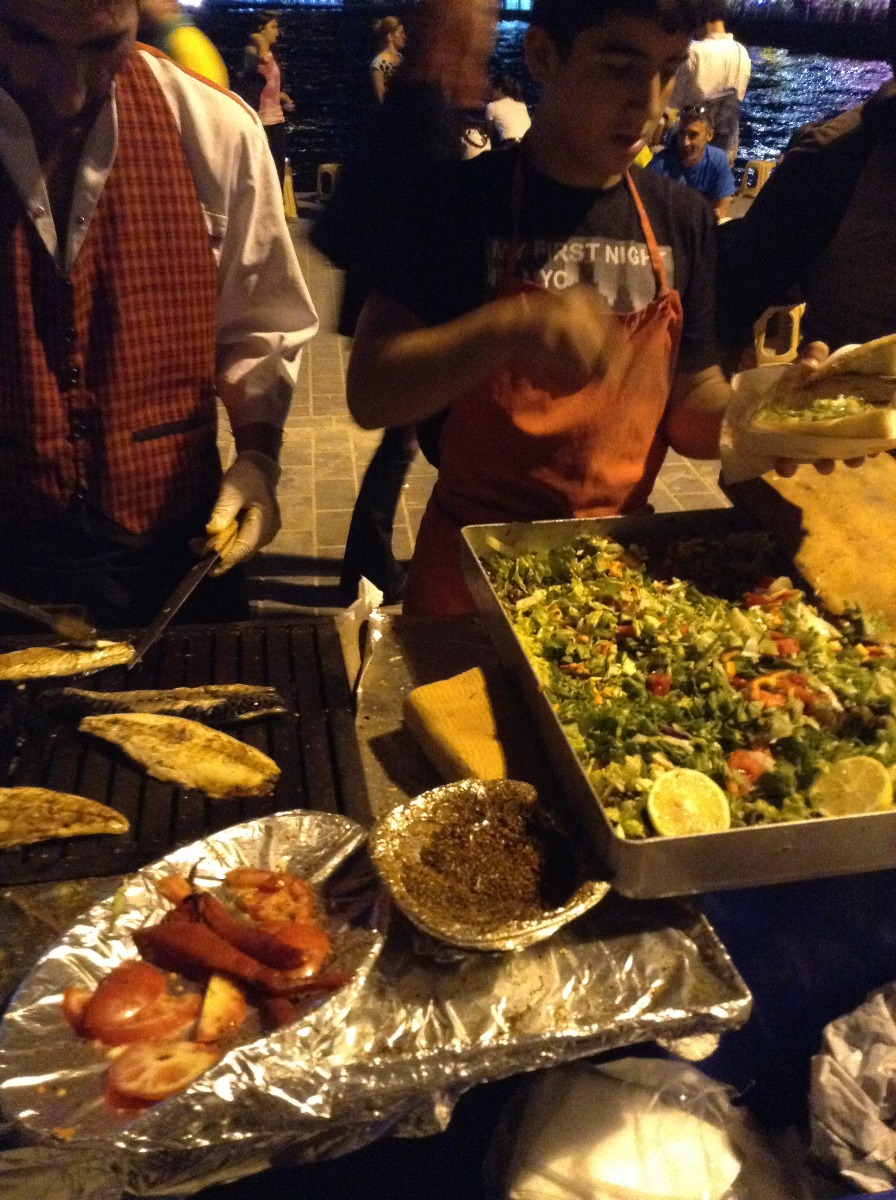 Next stop that evening was a fish sandwich like no other - the balik-ekmek. Hundreds of fisherman line Galata bridge every day fishing for mackerel, and each evening a huddle of stalls prepare the day's catch just metres from the bridge. The fish is filleted and grilled over hot coals then served in a sliced baguette with a simple lettuce, tomato and parsley salad. The fish is seasoned with a mixture of aleppo chilli flakes, sumac and oregano during and after cooking, and a good squeeze of lemon juice brings all the flavours together. The whole experience is really atmospheric as, sandwich in hand, you gaze out across the sparkling bosphorus, and admire the night skyline of the city.

Continuing on the seafood theme, just after we'd tried our second balik-ekmekwe came across a few people selling stuffed mussels on the street. We eyed them up for a few minutes just to make sure that trade was brisk before sampling them. The mussels are cooked, removed from their shells and then combined with rice and parsley, and the spices we detected included a touch of saffron, cumin and cinnamon. This rice mixture is then pressed back into the mussel shells then beautifully arranged on huge metal platters, and you can buy one mussel at 1 lira a pop (less than 50p). The picture shows a platter after it's been ransacked by hungry passers-by - it's not unheard of for people to eat 20 in a row... 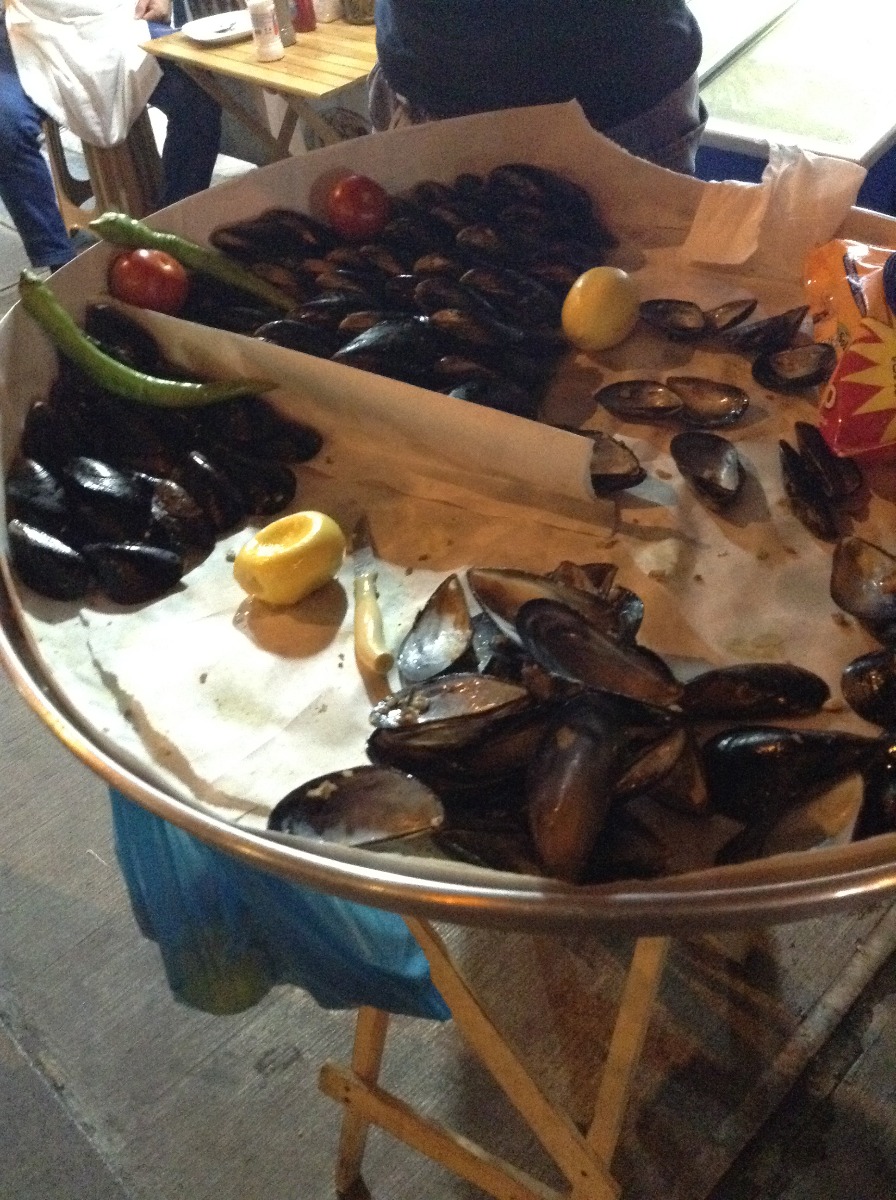 The fragrant pilaf rice that the mussels were stuffed with is a throwback to a traditional Ottoman recipe that can be found in lots of guises across the city. We tried a richer, more cinnamon-y version with raisins and pine nuts that was served with grilled chicken sprinkled with sumac. I tried to recreate this back at Spicery HQ, and served it with turmeric potatoes, a parsley and sumac molasses salad and yoghurt with mint, dill and cucumber. At the height of Ottoman rule, the food prepared in the kitchens of the Ottoman court was considered up there with French and Chinese cooking, and over the years many of these recipes gradually filtered down to household kitchens. The rich, spiced flavours of the era and the distinctive use of dried fruits like apricots and prunes seems to have fallen out of favour, so it was nice to see that the pilaf lives on. 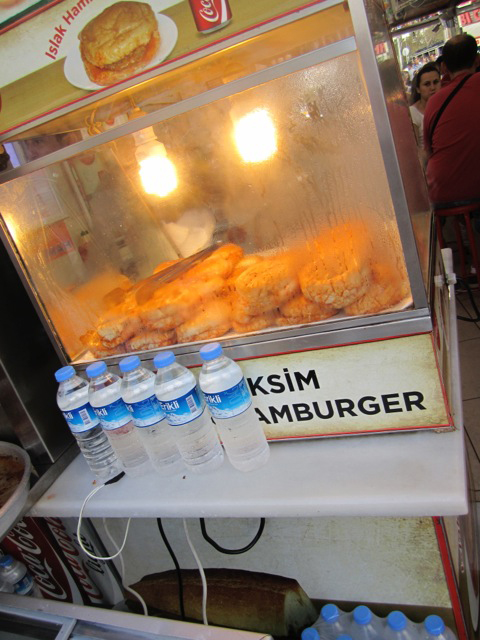 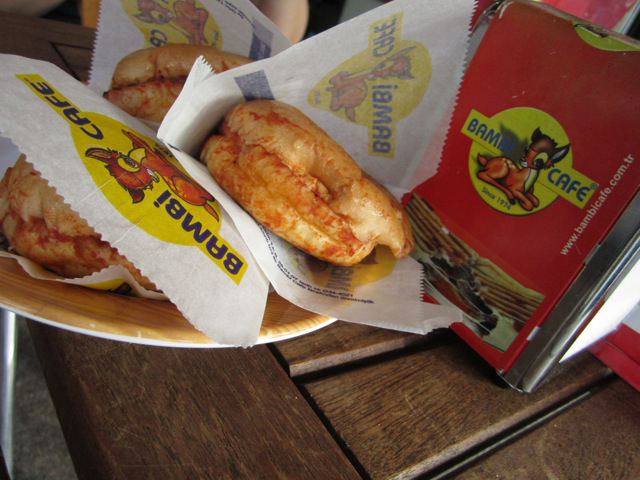 On the less sophisticated end of the Istanbul culinary scale is the 'wet burger' or Islak burger. We had to try this after reading an intriguing description on a flyer of things to try and do in Istanbul - 'the funny little doughnut looking burger thingy's, have delicious sausage inside and for 1 or 2TL each, that's a budget food bonanza'. Imagine if you will a garlicky McDonald's hamburger, replace the ketchup with a richer tomato sauce then stack a couple of hundred of these inside a glass display cabinet. Pump steam into the cabinet until the burger bun goes all sticky and squishy. There you have a 'wet burger'. I think you might classify eating one of these as a guilty pleasure, two or more as downright dirty. 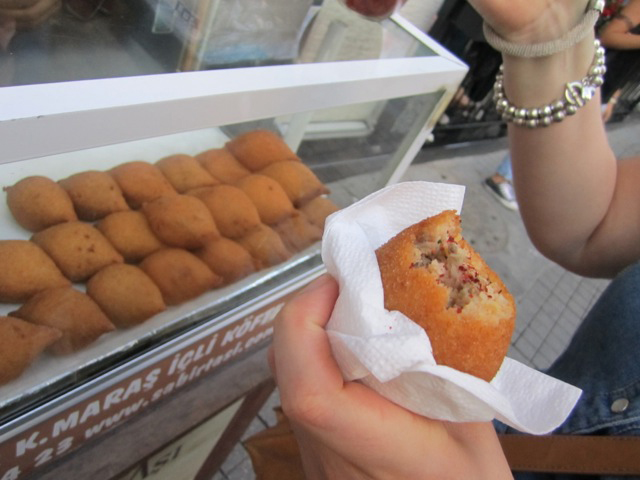 We stumbled across something of an Istanbul institution on Istiklal Caddesi, Istanbul's equivalent of Oxford Street. Slightly old-school and incongruent against the trendy shopping street, you'll find a little stall selling arguably the best icli kofte in the city. Icli kofte look a bit like pointy scotch eggs, but the bulgar wheat coating hides a minced beef, crushed walnut and onion filling. You can get them steamed or deep fried - these ones were deep fried, and we cracked them open, sprinkled them with sumac and ate them as soon as their steamy interior had cooled just enough. They were a really satisfying and filling pit-stop from the early evening crowds of shoppers and trams trundling up and down the street.

You can hear the ice-cream vendors in Istanbul before you see them - they make a big song and dance to entice people over. Jangling cow bells, swirling their long metal paddles over their fez-capped heads, they turn the making and serving of this unusual treat into a theatrical display. When they finally hand over your ice-cream after playing all sorts of tricks and sleight-of-hand, it's worth the wait - I wholly recommend the vanilla topped with crushed pistachios. The unique chewy texture of the ice-cream comes from the addition of ground mastic, a type of resin tapped from a tree that has protected status along the Turkish coast. It's also used to lend a very subtle, pine-y taste to other sweets like Turkish delight, and even savoury dishes of chicken and seafood.

Turkish people are obviously very fond of sweets, not least baklavawhich is a world away from the stale, dry stuff you often encounter at home. Here you can find it freshly baked everyday and drenched with sugar syrups flavoured with rose petals or cinnamon, then dusted with bright green pistachio powder. You'll find cafés with chairs and tables spilling out onto the street completely packed with people each enjoying whole platefuls of baklava. That and a cup of really strong Turkish coffee over a chat with friends is a very civilised way to while away an afternoon.

Another sweet classic that has lost something in translation somewhere on its journey from Turkey to the UK is the infamous Turkish delight. Forget Fry's, this stuff is for grown ups. It has a much more sophisticated texture and is a visual feast, too. Its origins are shrouded in all sorts of stories and myths about harems of beautiful ladies - the very name conjures up images of Arabian Nights opulence. 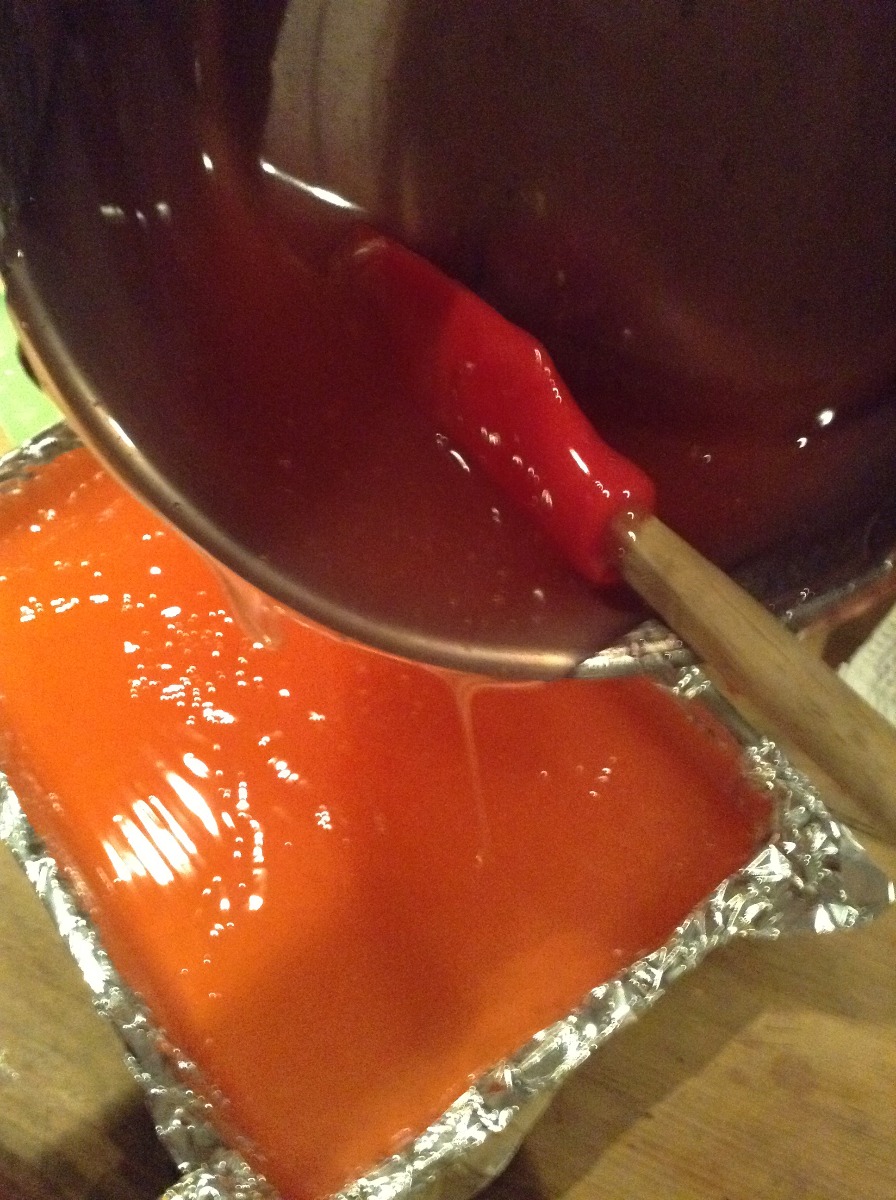 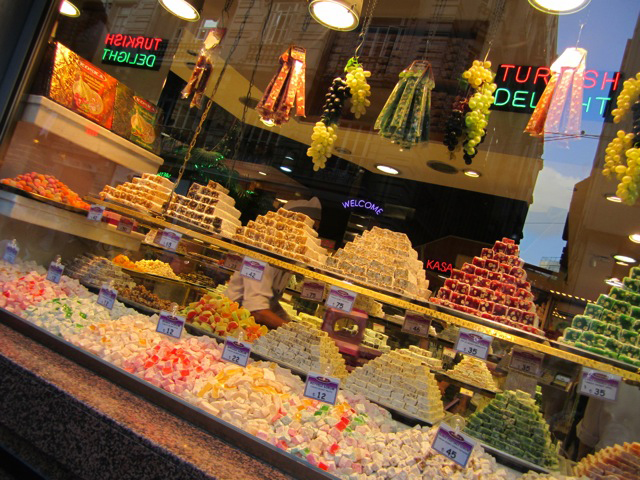 Classically flavoured with lemon or flower waters like rose or orange blossom, it's quite a process to make, involving a sugar thermometer, corn starch for thickening and cream of tartar to prevent any graininess. I thought I would give it a go back home - most Turkish delight you get here will use a bastardised recipe that cuts corners by replacing the corn starch and an afternoon's stirring with the addition of gelatine. Best bit of the making process? Cutting it into cubes once it had set and pouring an entire bag of sifted icing sugar over it. And the eating.

Hopefully that gives a little glimpse of the food in Istanbul. It's by no means an exhaustive list, but to us that can only be a good thing, as there's still loads to try on our next visit!