I've been to Thailand on a few occasions (before working as a development chef) and loved both the country and the food. I was eager to get back there to explore the cuisine in a bit more detail - and to hopefully find some dishes a bit more unusual than green and red curry and pad thai. Thailand did not disappoint! I began my journey in Chiang Mai, Thailand's 2nd largest city is in the north of the country, fairly close to the borders of Lao and Burma. The cuisine of the area is known as Lanna cuisine after the Lanna kingdom which existed in the region between the 13th and 18th century. 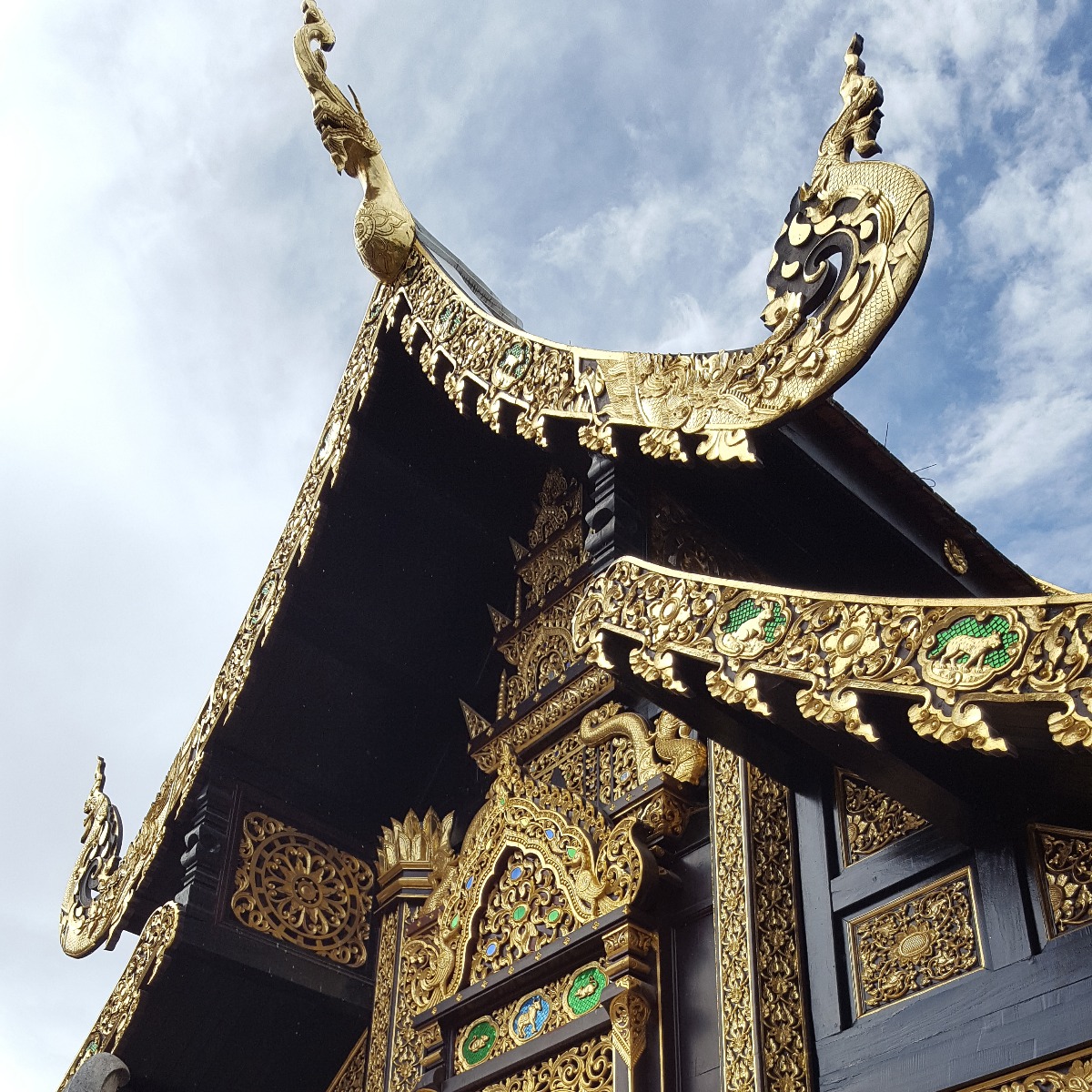 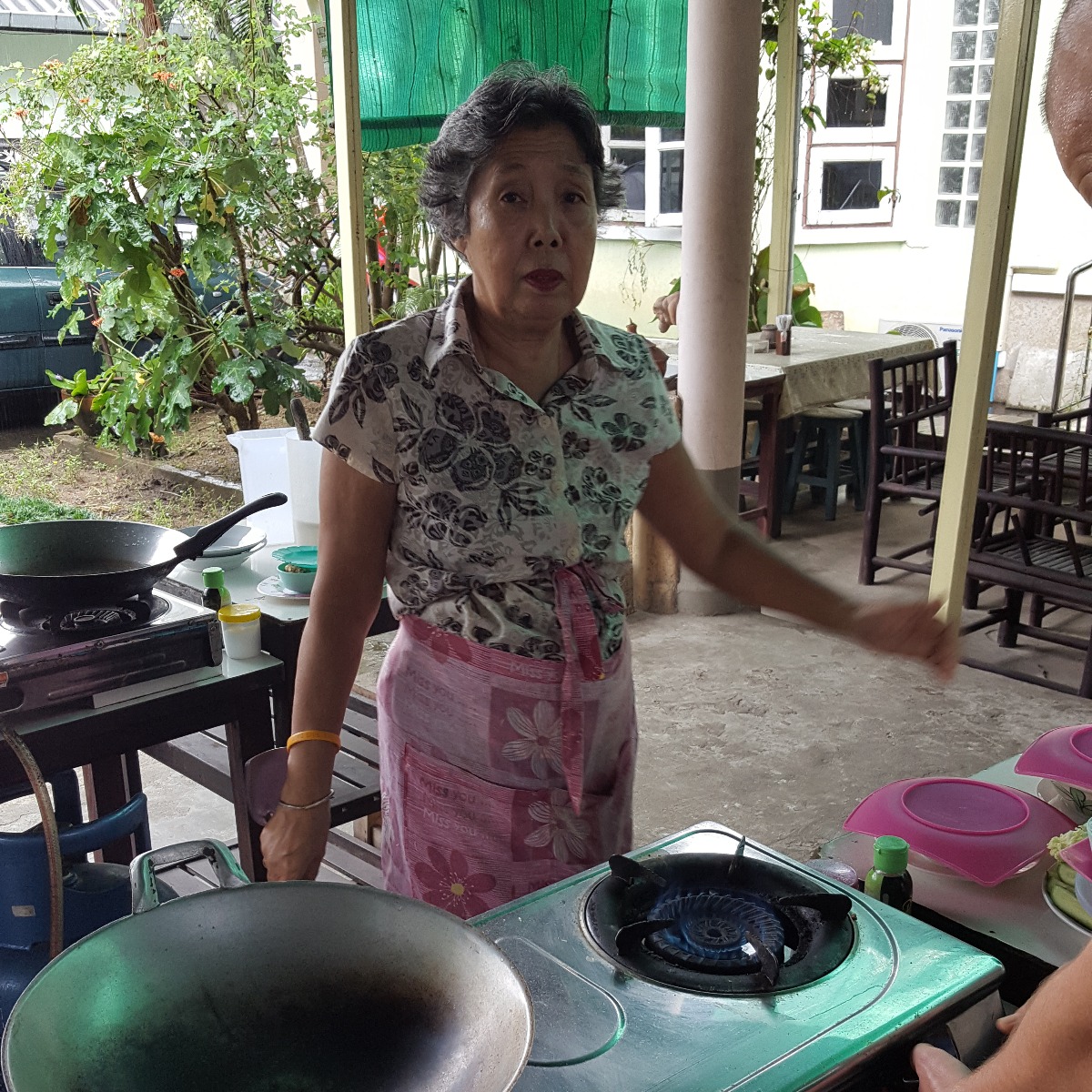 As with southern Thailand fresh and fragrant lemongrass, kaffir lime leaves, turmeric, ginger, galangal and both fresh and dried chillies feature heavily in the cuisine, but unlike the south, dried curry powder blends are often used. This is because of the proximity of Burma - when British India occupied Burma many Indians settled there introducing their love of dried spices. A couple of other major differences are that sticky rice is eaten over steamed jasmine rice and traditionally less coconut milk appears in the dishes because coconut trees grow less easily here. I took a cooking class just outside the city, taught by the knowledgeable Lannee and her sister who have lived in Chiang Mai for 25 years. 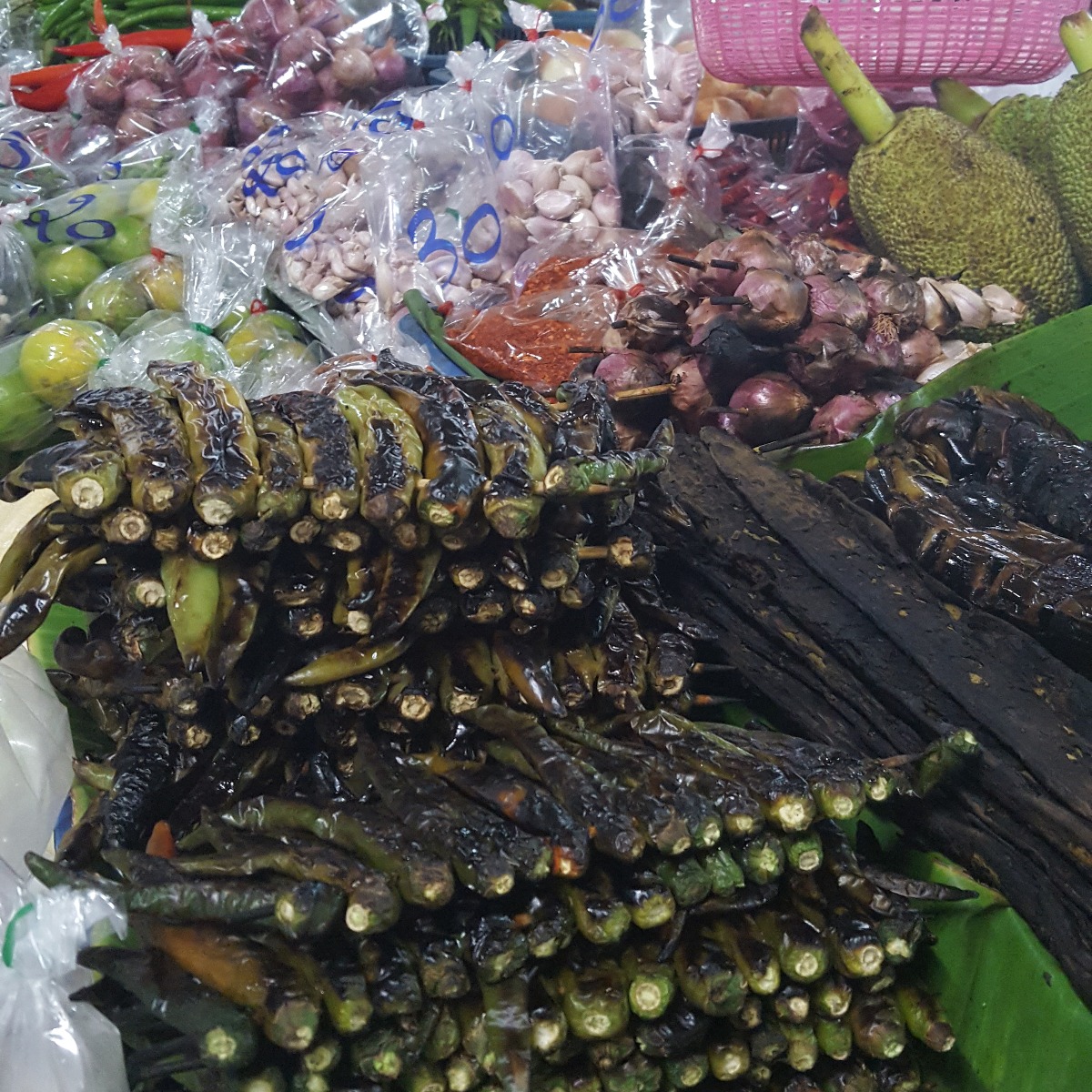 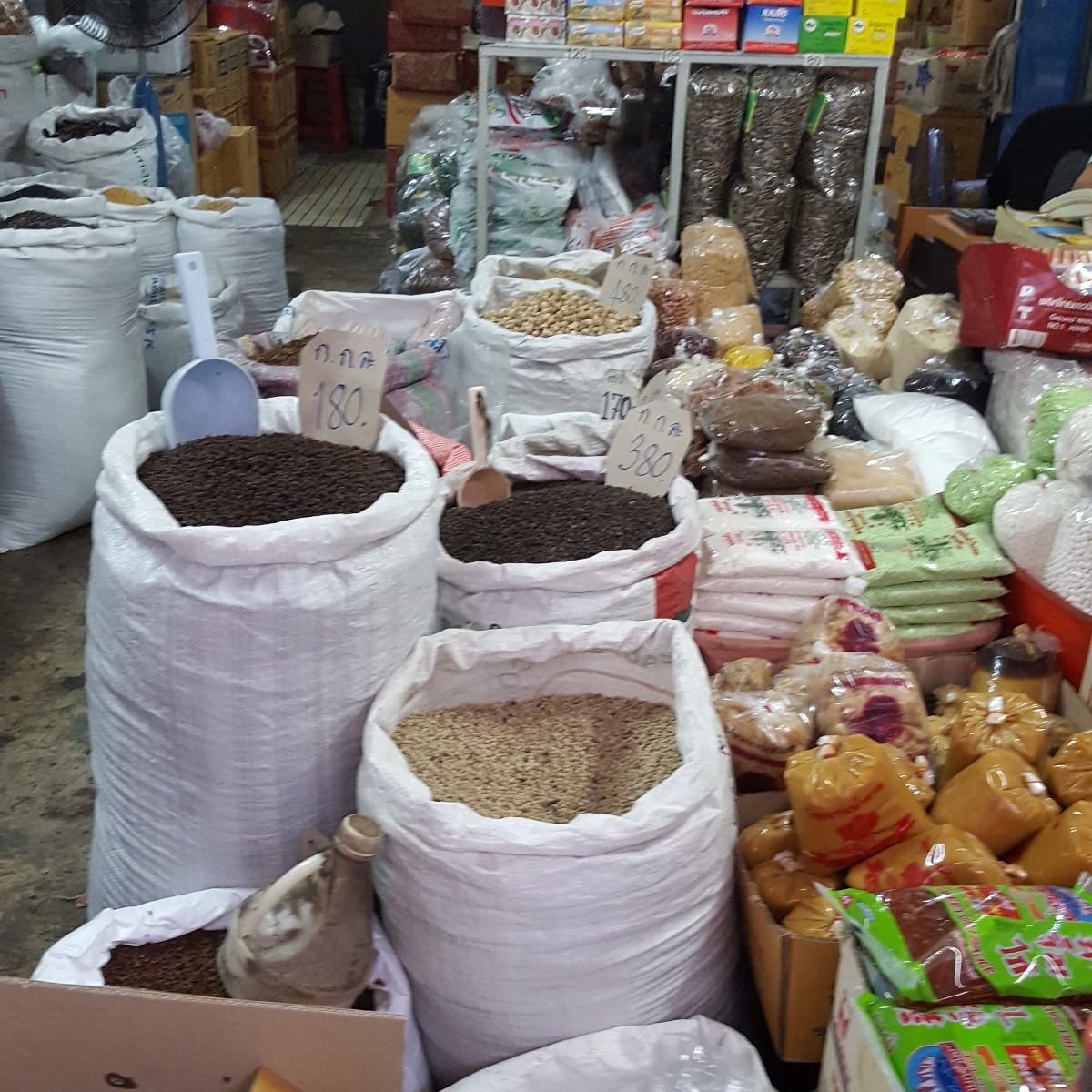 Firstly Vannee took us around a market and explained all the ingredients and building blocks of Thai cuisine. 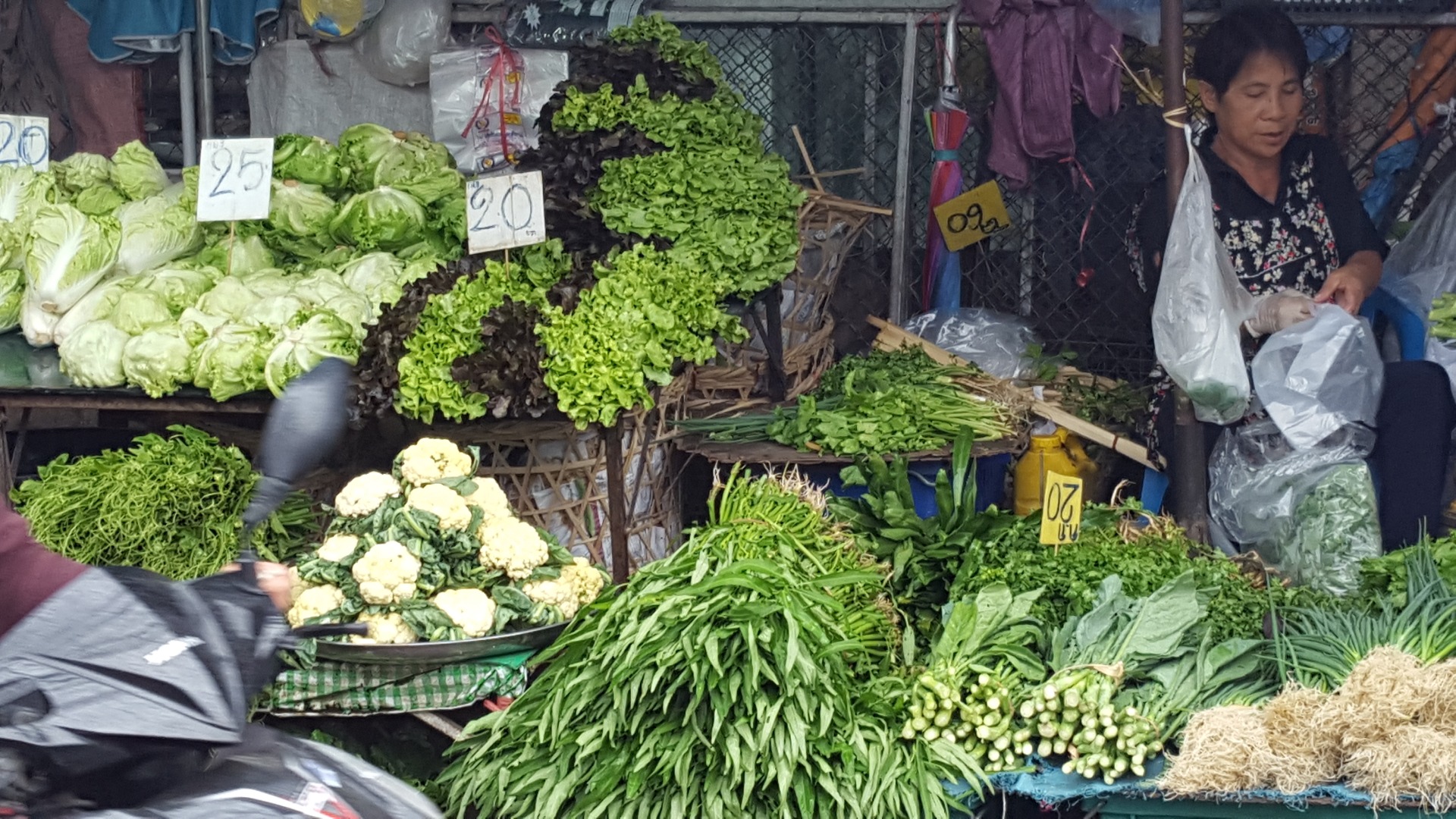 Piles of Thai herbs at a market

It's well known that Thai food relies on a balancing act of sweet, sour, spicy, salty and bitter or in Thai - waan, brieow, ped, kem and kom. This is not necessarily just in a dish (although often one dish restaurants will have a selection of chilli, sugar and vinegar to add at the table to your taste) but as Thai food is often eaten as shared meals several dishes must balance so if you have a very hot stir fry you might have a sweet milder curry as an accompaniment along with a tangy salad and some bitter raw aubergines. 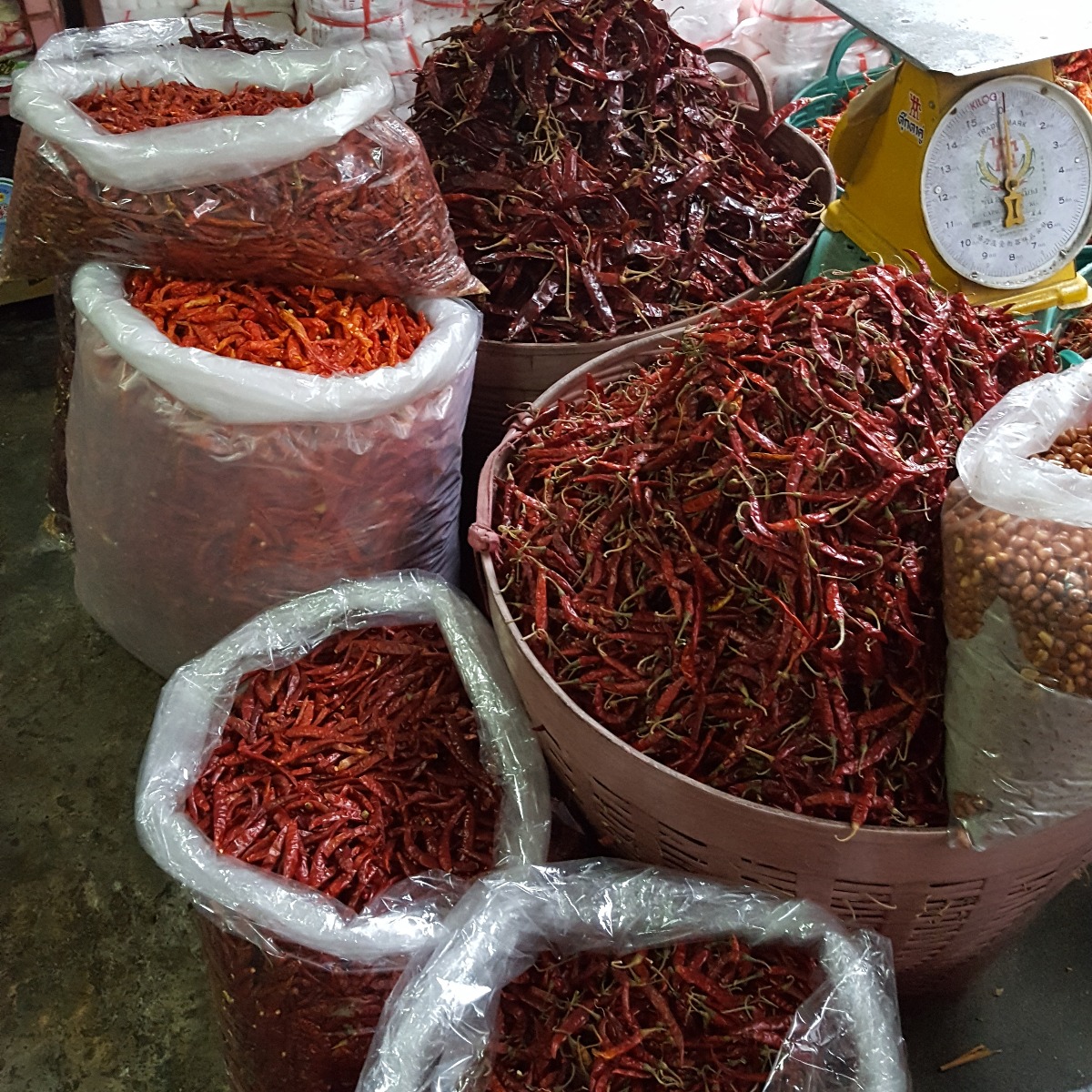 All the types of dried chillies 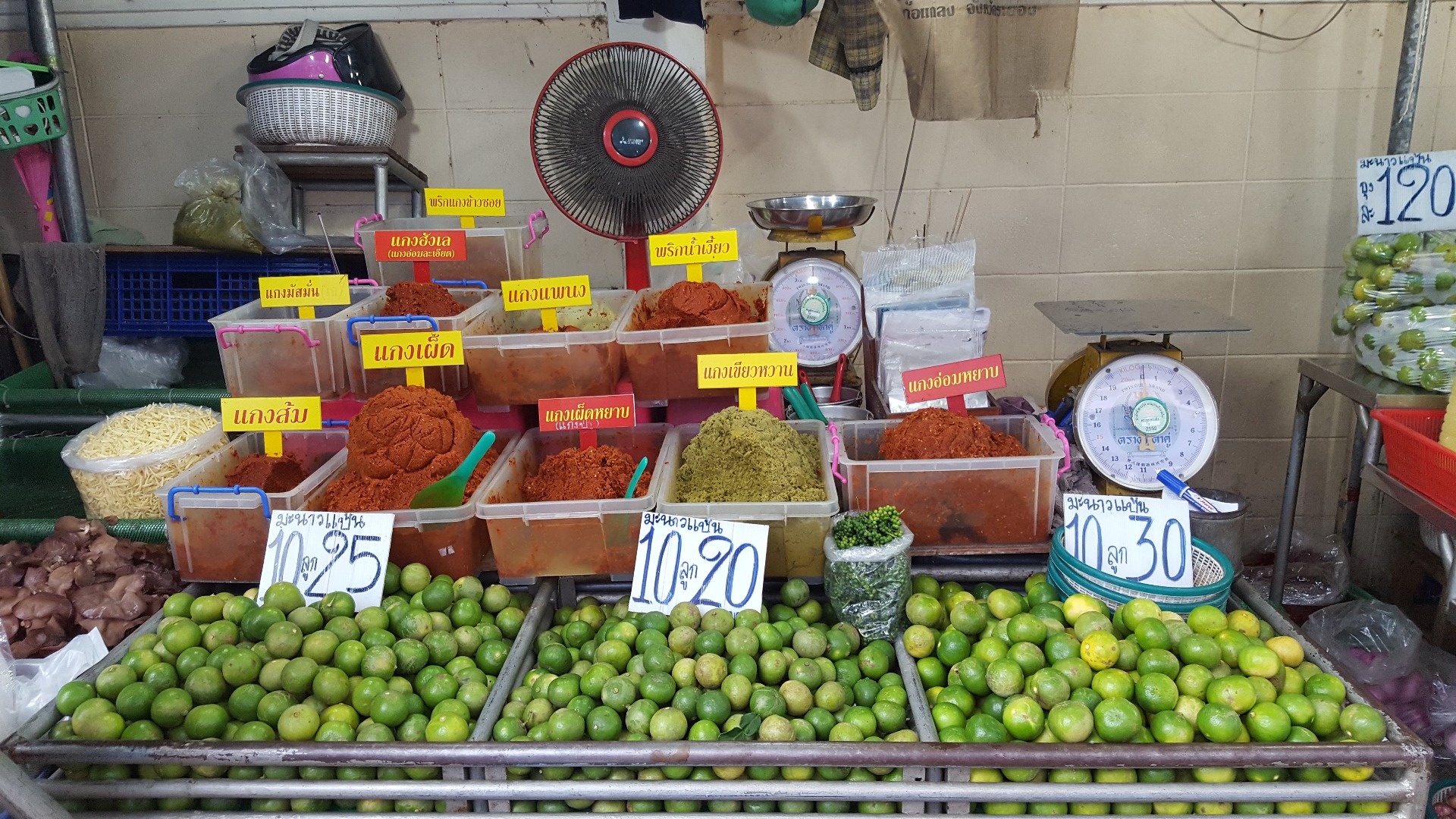 If you don't want to make your own there's plenty of fresh curry pastes available.

Here are the dishes I learnt from Vannee (look out for them in your spice box over the next few months!)

Gaeng Hang Lay Moo (sometime called Burmese Curry) is a rich and tangy curry made with pork belly with plenty of fresh ginger added at the end. It's a little bit like a massaman but without the coconut milk and slightly less complex but I think equally delicious! 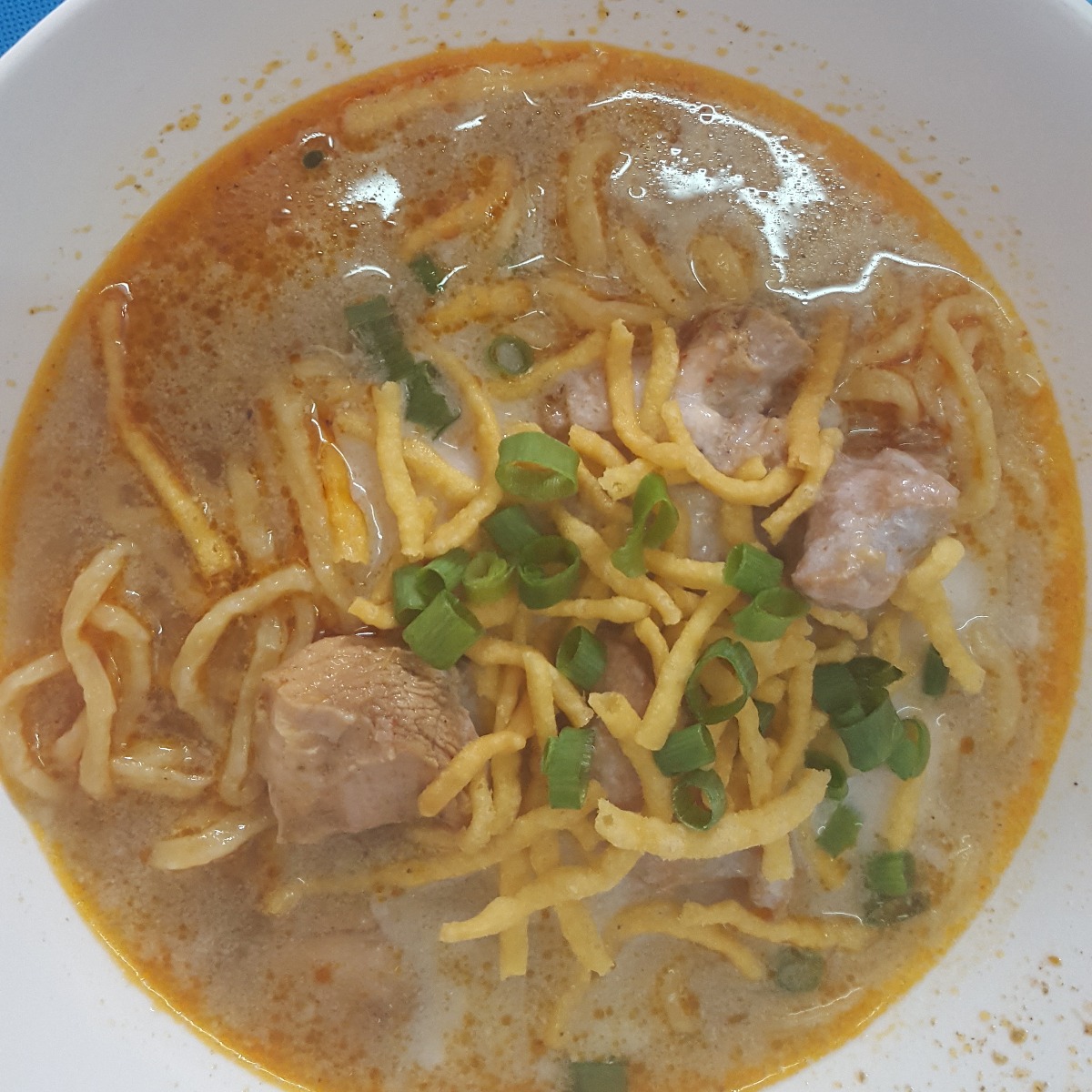 Khao soi is a mild curried noodle soup (made with a red curry paste and a Burmese curry powder) topped with crispy egg noodles and served with raw shallots, spicy pickled mustard greens and fresh lime.

Who knew that the Thai's had a multitude of sausages under their belts? The Chiang Mai version is known as sai oua and is flavoured with red curry paste and plenty of fresh lemongrass, coriander and shallots. They're grilled over charcoal on the streets for a quick tasty snack. Having made a few sausages in my time with dried sausages skins, making this version with fresh intestines (yum!) was a little bit messy and not very photogenic! 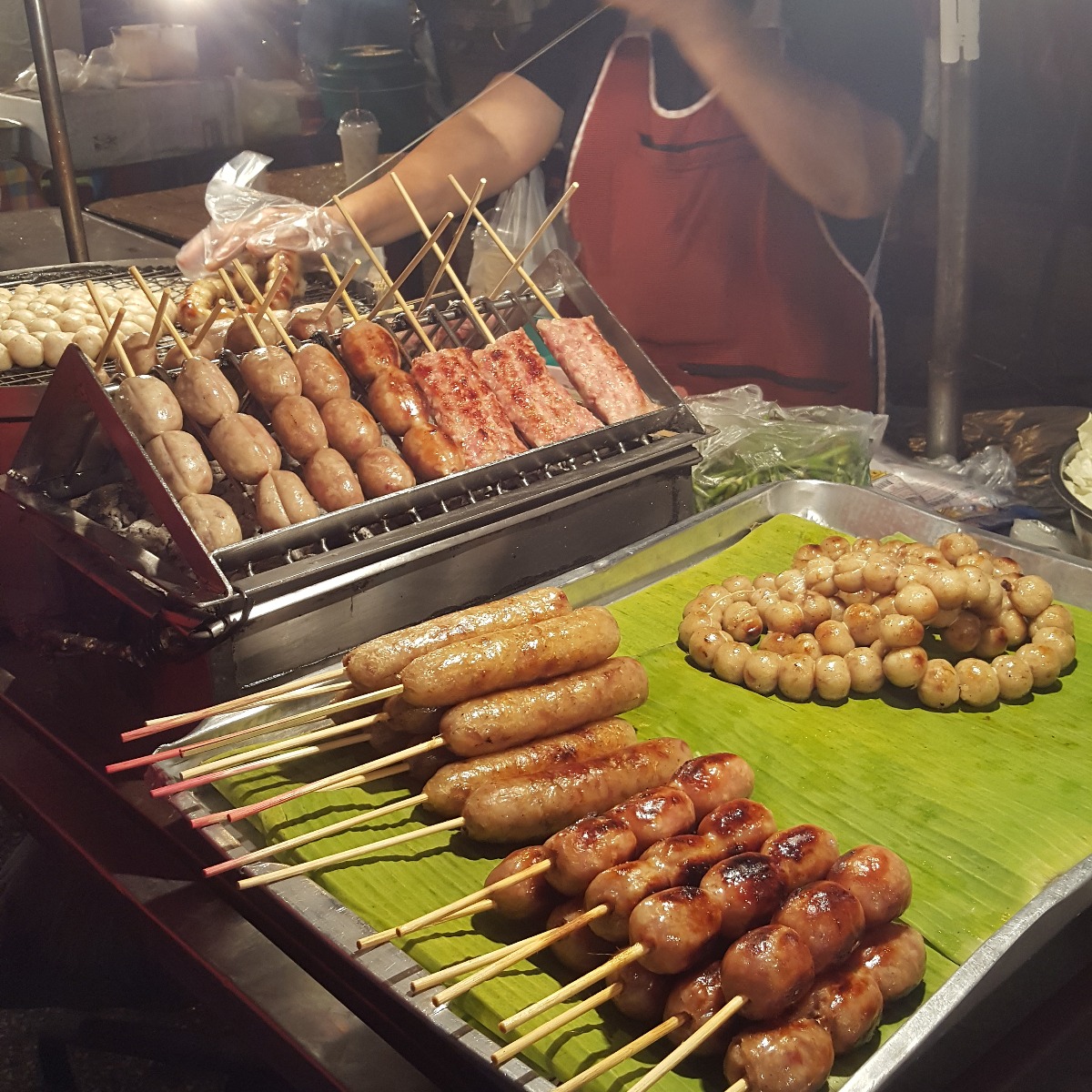 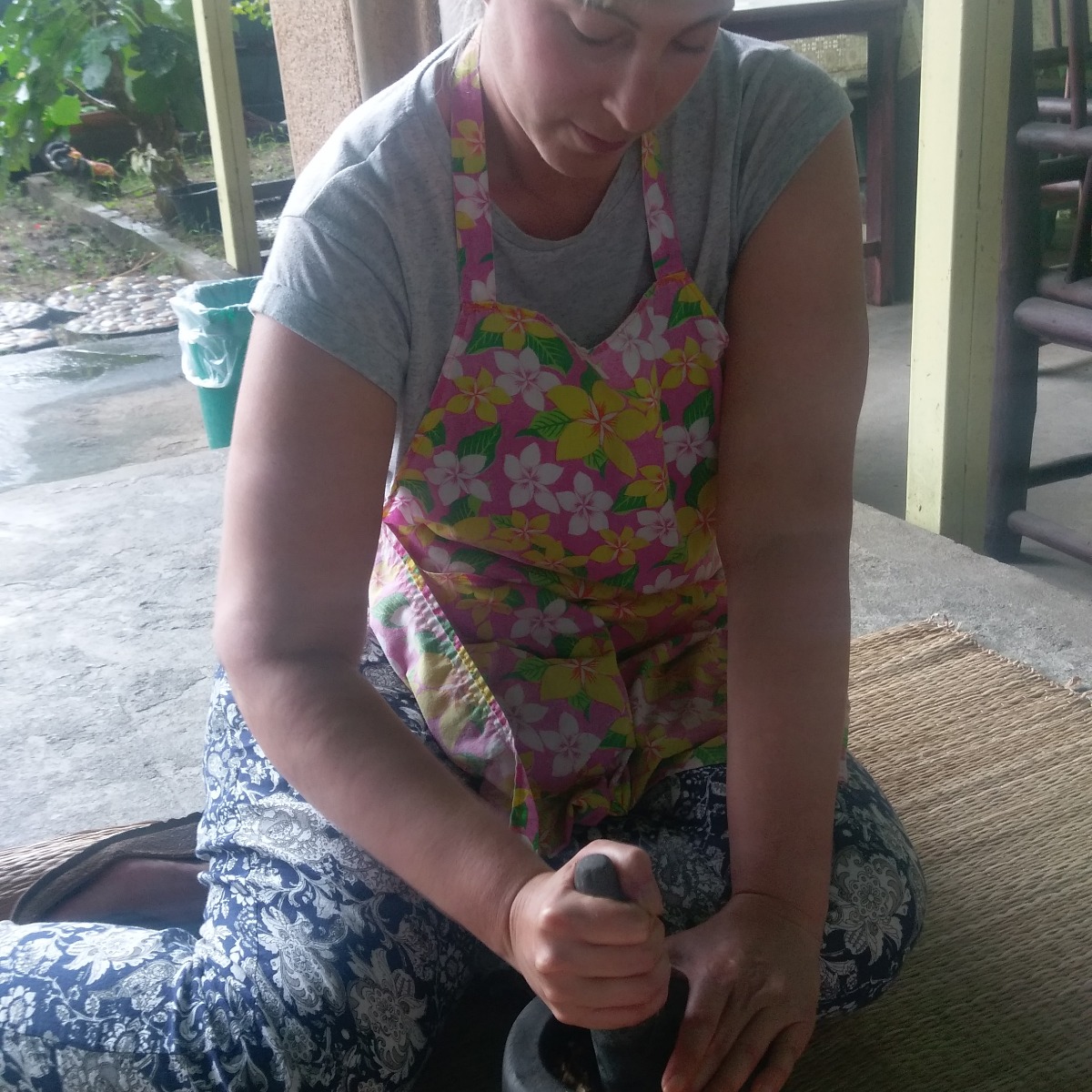 Sai oua (Chiang Mai sausage at a night market); Grinding the all important paste for the larb

Larb, a spicy pork mince salad is said to be the one of the national dishes of neighbouring Lao and contains plenty of fresh kaffir lime leaves, chilli and lemongrass. The Lanna version larb muang moo includes lots of toasted dried red chillies and aromatic spices including star anise, coriander, Japanese pepper, black pepper, and cassia ground to a fine paste, fried with the pork then served almost like a dip with fresh salad. 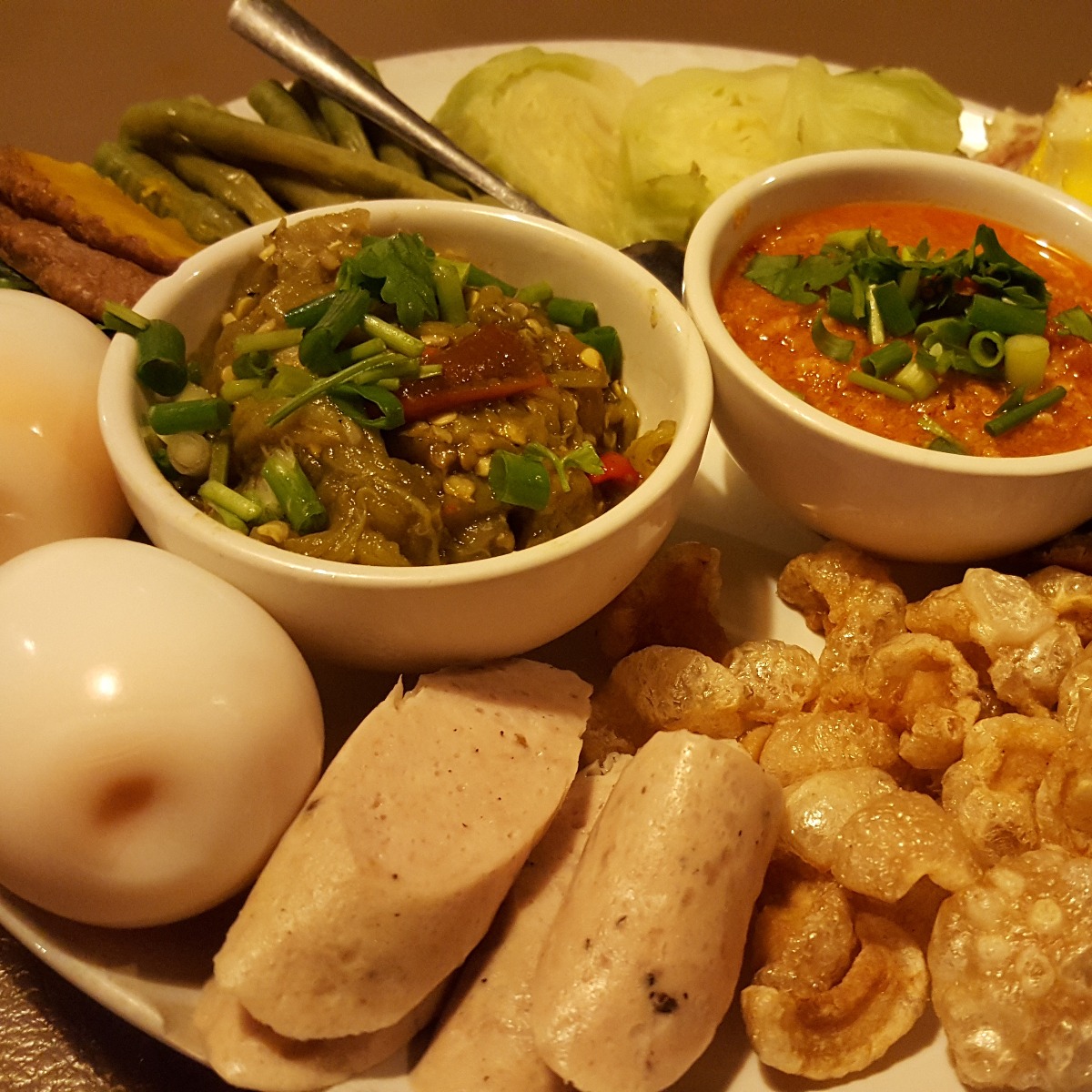 These two types of chilli sauce known are served with a selection of vegetables, pork scratchings, boiled eggs and sausage to dip. They're eaten before the main course - a great way to start the meal! Nam prik num is the hot one made with the grilled green chilles and is a bit like a Mexican salsa. Nam prik ong is supposedly the Thai version of an Italian ragu as it's made with pork mince and tomatoes. 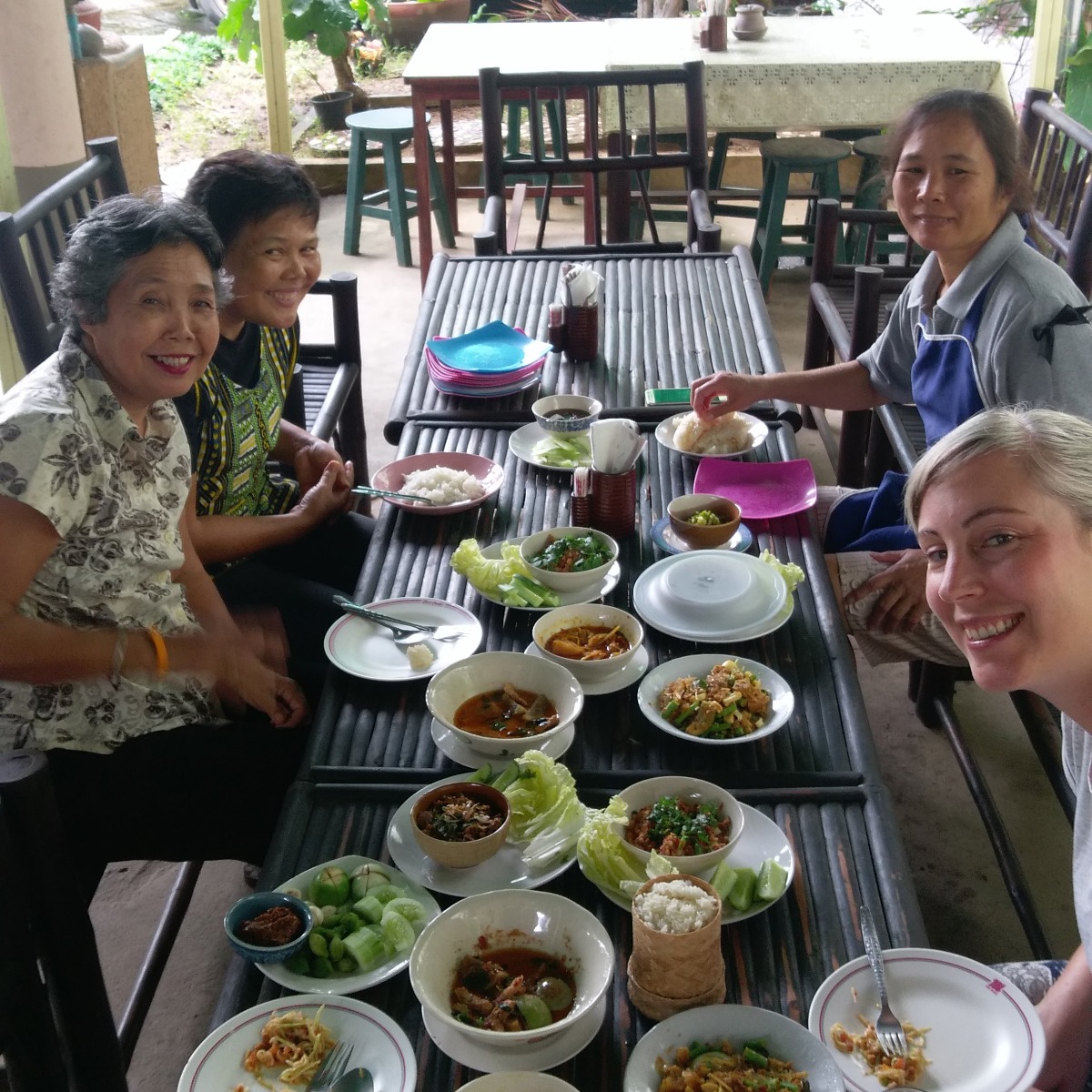 Presenting (and eating!) all the dishes made at cooking school

If you happening to be visiting Thailand and want to find out where to eat then this blog is great https://www.eatingthaifood.com/

Or if you're not lucky enough to be going to Thailand then eat here http://www.somsaa.com/ for amazing regional Thai food.