Istanbul was a place I'd been keen to visit for years, it's truly one of the great cities of the world and despite all the cliches about being the meeting place of east and west blah blah blah....., it does still have some of that edginess from the clash of cultures. It's a place where everybody seems to be interested in good food, and Istanbul cooks are blessed with all sorts of fantastic quality fresh produce. 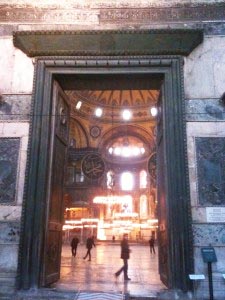 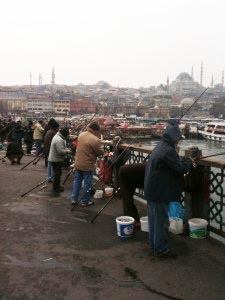 Perhaps because of the fairly mild climate around there, they have access to great fresh ingredients year round and the cooking is fairly plain and Mediterranean in influence, unlike further south where the climate is more extreme and the influences are more Middle Eastern with lots of dried spices. There may also be something of a political element as after Turkey became a republic in the 1920s the focus was very much on becoming a modern westernised secular state, and maybe the more opulent cooking of the Ottomans was no longer fashionable. 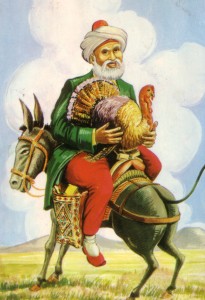 Recent years have apparently seen a revival of interest in some of these more complex, highly spiced dishes but that style of cooking is still very much on the margins. You can see this in the famous Spice Bazaar where despite all those colourful piles of kofteand curry blends (most of which including some extremely dubious 'saffron' seems to be aimed at tourists), cooks in the city actually use a very small number of spices - ground cumin, dried oregano, maybe a bit of sweet paprika, ground cinnamon, but most importantly they use a lot of very mild red chilli flakes (what we call Aleppo or Urfa flakes). They're special, not just for the mild heat level that allows you to use them in very generous quantities, but more for the deep, rich flavour and colour that's achieved by sun-drying, salting then rubbing the flakes in oil.

No reason for this- i just like the fact it's a postcard from turkey showing a turkish man carrying a turkey!

These chilli flakes are available in various grades but generally are all fairly mild and destined to be used in a huge number of dishes in place of black pepper which doesn't seem to be used much at all. As far as I could tell the flakes tend to be used either at the table or for seasoning a dish towards the end of cooking, the paste (made from the same flakes ground up with oil) is used in the actual cooking process.

I found this place by wandering around the old part of Istanbul, spotting a traditional looking restaurant packed with contented looking elderly Turkish men and thinking to myself 'that must be a great place to eat'. It was only once I'd sat down and finally identified that distinctive scent in the air that I realised with a sinking feeling it was a tripeshop. Too late to bail out, I ordered the only dish they served - Tripe soup which is a popular dish in Istanbul and renowned as a formidable hangover cure. I wasn't hungover but there's no doubt this would do the trick - kill or cure....? 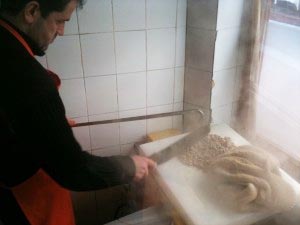 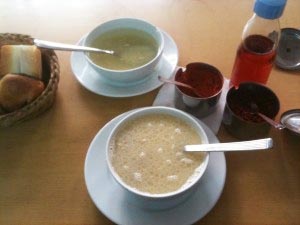 A tripe shop in the old part of town which serves....tripe soup

The tripeis boiled then chopped and served as a soup with the cooking broth. On the side to use for seasoning are the standard red Aleppo chilli flakes, hot paprika, vinegar and an incredibly powerful garlic infusion that I mistook for a soup and swallowed a spoonful only to realise it was just raw garlic infused in water. Despite all that it was actually a genuinely delicious meal and the seasoning of a sprinkle of dry Aleppo chilli flakes and a splash of good quality vinegar really lifted the whole thing (it's a combination I use at home now in all kinds of soups and stews). 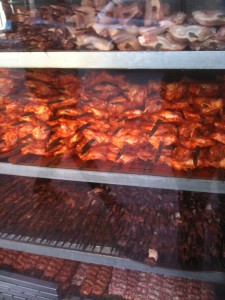 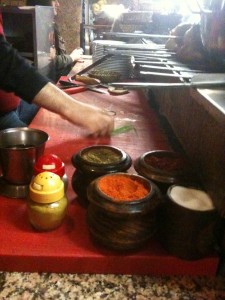 Turkey is of course famous for its kebabsand at the ocakbasi restaurants you can sit around the grill and watch the masters at work. The seasonings as you can see from the photo above are usually the standard hot paprika, ground cumin, oregano and aleppo or urfa chilli flakes (unusually this chef also had some mild curry powder in the yellow shaker which he told me was his secret ingredient for chicken kebabs?!). The great skill in these restaurants is the careful seasoning (which as well as the spices can also include onions and fresh herbs), and also the cooking process to get the charred edges with the meat still juicy inside.

Urfa Kebab
To serve the kebabsthe chef carefully seasoned each layer of paper thin lavash bread with sweet paprika and oregano, then rubbed it with the warm kebabto moisten the bread with the fat and juices from the meat before repeating the process with each layer. It was then served with simply grilled tomatoes, green peppers and a really fresh tasting parsley and red onion salad seasoned only with sumac (a ground red berry with a sour, fruity flavour). It was so delicious the first thing I did on coming back to work was get Emma to develop our own Urfa kofte kebabrecipe to go in that summer's Season & Spice box!

This is a delicious drink that's sold from street carts all over the city (in fact all around the Middle East) during the winter. It's just sweetened milk, sometimes flavoured with rosewater but always topped with lots of fresh ground cinnamonand thickened with salep - the ground root of a wild orchid which is now incredibly rare and expensive. The ICI is one of the few places who still use real salep flour, the street sellers would now use cornflour as a thickener.

Boza- a mildly alcoholic fermented drink
Hande also introduced me to boza- a thick drink made from fermented bulghur wheat that's a winter treat in the city. It's been popular around the Eastern Mediterranean and the Balkans for centuries and apparently the Ottomans used to give it to the troops as it's so warming and nutritious. It's served with a generous sprinkling of ground cinnamon and a handful of roasted chickpeas - kind of a cross between a sweet snack and a drink. Many thanks to Hande and if you're ever in the city be sure to pop into the ICI for a bite to eat!