My trips to London usually involve the central train stations, eating sushi and maybe visiting a museum or two, but I recently visited a different side of the city, and not one I’d come across before: Southall, sometimes known as ‘Little India’. Although the area is only 12 minutes by train from Paddington, it’s quite far away culturally!

The majority of the population of Southall (apparently 55%) are Indian or Pakhistani, and in particular there’s a majority of people from the Punjab region of India. This is evident from the moment you get off the train and see the bilingual station signs, with Southall written in both English and Punjabi. Southall only became a recognisably multi-cultural area from the 1950s onwards, as after the British Nationality Act was passed in 1948 many Indian workers chose to come back to England as citizens after working for the British Empire in Uganda, rather than returning home. Many of these workers were originally from Punjab, and a combination of local factories, 1950s labour shortages and the ever-expanding Heathrow Airport meant that Southall had lots of jobs to offer – and Southall quickly became the Indian hub of London. Once you get into the centre of Southall, you see more and more how different it is from much of central London – every other shop sells brightly coloured fabric and jewellery, Bollywood music fills the air and the fast-food vans sell mutton rolls and idly (steamed rice/lentil cakes served hot with chutneys and lentil sambar), instead of the usual quarter-pounder and chips! Many other shops also sell snack food – either corn in a cup, or deep fried Indian desserts, or kulfi. [caption id="attachment_1415" align="aligncenter" width="300"] 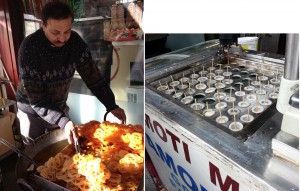 Left, a man cooking jelabi – batter is piped into the hot oil and then soaked in syrup. Just, wow. Right, a kulfi stand, with the kulfi on sticks.[/caption]   I went to Southall to join an ‘Indian Food Walk’ around the area, led by Monisha Bharadwaj – a chef, food writer, food consultant and occasional TV panel judge (on Iron Chef America, and a few similar shows). Monisha took a group of us around for a couple of hours telling us about the history, culture and music of the area and – most importantly! – the food. Possibly my favourite part of going somewhere new is supermarkets. I love food shopping even on normal occasions, but seeing what people buy to eat in other places is just fascinating. While on the tour we were directed into the ‘Quality Foods’ supermarket in Southall, which was intriguingly full of the unknown. Although I recognise foods like habanero peppers and okra, things like karela (bitter gourd) and banana flowers are much less familiar, and the spice aisle….well, in most shops you don’t need a whole aisle for spices!! [caption id="attachment_1416" align="aligncenter" width="225"] 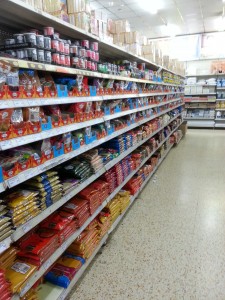 Both sides of this aisle are spices. About a quarter of them even I didn’t recognise or know what to do with![/caption]   Needless to say, we spent about half an hour of the tour in there. I later went back and stocked up on random Indian snack foods – I’m rather looking forward to trying the peanut chikki that’s in my cupboard! (A sort of Indian spiced peanut brittle). Monisha also bought a bag of Moong Dal (salty fried split mung beans) for us to nibble on as we went, and those were amazingly moreish. I’m soon to be trying this recipe: http://www.jopreetskitchen.com/2013/11/fried-moong-dal-siru-paruppu-haldiram.html - they look identical to the ones I tried! All the recipe requires is some yellow lentils, which after being soaked and patted dry are deep-fried for a few minutes – and once fried they keep well in a jar. Seasoning suggestions before snacking include lemon, chaat masala, chilli powder or asafoetida. Do let us know if you try it! 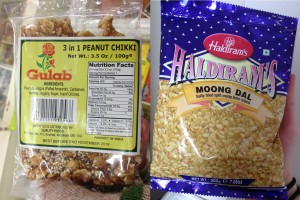 For a long time Southall was also famous for one of its pubs, the Glassy Junction, which was the first in the UK to accept Indian rupees as payment – sadly the pub closed down a few years ago, but it’s now home to a rather good South Indian vegetarian restaurant chain, Saravanaa Bhavan. I went with three other people, which was great as it meant we ordered enough different dishes to raise both of the waiter’s eyebrows. [caption id="attachment_1419" align="aligncenter" width="300"] 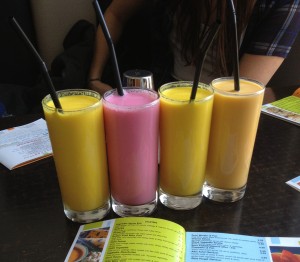 Saffron (badham kheer) drink, and rose and mango lassi[/caption]   Monisha had told us the basic differences between North and South Indian cuisine, so we ordered both the North Indian and South Indian thali. In general, the principle is that the South of India is very hot. Consequently, the foods are more cooling – generally lightish dishes involving coconut and chilli (which makes you sweat, and cools you down!). Lentil sambar (a yellow lentil soup) comes with pretty much everything. The North of India however gets much colder, so the foods are more warming to the body – the spice blend ‘garam masala’ actually means ‘warming blend’ (I learned), and the dishes are heavier and more fragrant, with more tomatoes and ghee. It was really interesting comparing the two trays of food, with the pickles, sambals and cold sweetened rice of the South Indian thali contrasted with the masala paneer, chickpea curry and potatoey flatbreads of the North Indian one. Probably everyone’s favourite dish ordered was the paneer dosa, a  sort of enormous thin pancake filled with gently spiced paneer cheese… but that said, it was all delicious, as well as being a really long way from the usual Indian curry house foods. I’ve never been to India so trying and comparing these kind of foods was really really worth the trip :D [caption id="attachment_1420" align="aligncenter" width="278"] 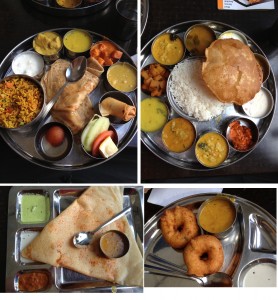 Clockwise: North Indian thali; South Indian thali; medu vada (lentil steamed doughnut-type food with – of course – sambar and chutney); paneer dosa and chutneys[/caption]   A couple of other interesting things: Karela, the ‘bitter gourd’ or ‘bitter melon’, is known to reduce blood sugar, among other health benefits – and consequently is very popular with Indian diabetics. (Not surprising considering the amount of sugar in jelabi, and other Indian desserts). It takes well to tangy dishes and stir fries due to its bitterness, but apparently takes getting used to. Rice varieties are very regional in India! Unlike the ‘basmati’ or ‘jasmine’ options we tend to have over here, cooks in India will seek out the rice from their particular region for particular recipes, as they know what it will come out like – what kind of fragrance it will have, what texture, and so on. Knowing your rice is quite a big thing. And my favourite fact of the weekend…. Rice is aged! Much like wines, rice is held to be better with age (to a certain point), and is aged in sacks, barrels or giant warehouses, usually for between one and two years, before sale. Although younger rice can be more aromatic, older rice has had more time to dry out, and so you end up with a fluffier rice when you cook it. Better brands of rice will have a standard ‘aging time’ for their rice, so that quality is always consistent – whereas supermarket basics sort of rice doesn’t have to hold to the same standards, and the grains or bags might be all different ages (resulting in less reliability). That was definitely the thing I was most surprised to learn, and I’ll be paying more attention to my rice from now on!