The recent surge of interest in Middle Eastern cooking sparked by Ottolenghi has focused on the edible delights of Lebanon and Morocco above all other countries in the region, yet Yemeni food is rarely celebrated beyond the country's borders. This is a shame, not least considering Yemen's rich history as a major hub on the spice routes between India and Italy, but also because Yemeni cuisine is really quite unique. My time in the country was filled with some very memorable culinary experiences. 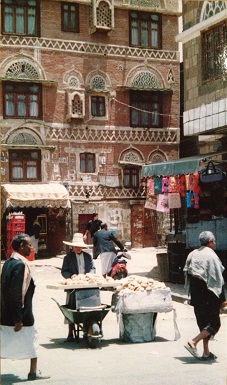 To me, the following three spices help to distinguish the food in Yemen from that of its Middle Eastern neighbours:

First things first, it's impossible to talk about Yemeni cooking without mentioning fenugreek. The spice is used daily and with such enthusiasm, it's a strong contender for 'culinary symbol of Yemen'. Its popularity might be due to its antioxidant properties - very useful for a nation of Qat-chewers and the digestive problems associated with the drug's long-term use. Fenugreek's knobbly, sand-coloured seeds need soaking in water to temper some of their bitterness. After a long soak, the seeds magically transform and swell to form a thick, gelatinous mass.

Blended with fresh green chillies, garlic, lemon juice and a handful of coriander leaves, the mixture transforms into a luminous green, frothy jelly known as hilbeh, the likes of which I've yet to encounter anywhere else in the Arab world, let alone anywhere else on earth. It provides the finishing touch to a sizzling hot stew called saltah, (widely regarded as Yemen's national dish), elevating an otherwise humble stew to the culinary wonder beloved of the people of Yemen.

Here's a picture of our attempts to recreate saltahhere at The Spicery: 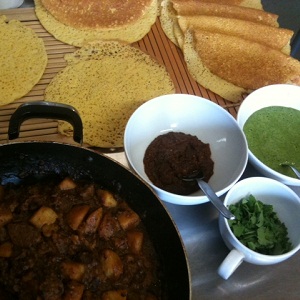 The other star ingredient of saltah is a special spice blend, hawayij, which is unique to Yemen. I'm sure each and every Yemeni housewife across the land has her own closely-guarded hawayijblend, but it generally comprises most if not all of the following spices:

It's a powerful blend, and is used sparingly to impart a smoky, musky warmth to stews, flat breads and grilled meats. To satisfy a seemingly insatiable desire for heat, the people of Yemen eat more chillies than any other culture in the Middle East. One of the fieriest concoctions I came across was zhug, a punchy relish comprising garlic and fresh, hot chillies blended with coriander leaves, cardamom, caraway seeds and black pepper.

Its popularity is reflected in its versatility, and it's used in much the same way as Moroccan harissa- as a sauce for grilled meats, swirled through soup and stews, or served simply as an everyday bread dip. Yemenite Jews who settled in Israel many years ago took their recipe with them, and I've heard that zhugremains a hugely popular condiment there to this day, widely available at any falafaljoint. The chilli was much prized for its medicinal properties, which might go some way to explaining why today's Yemenis love the hot stuff. We served our zhugalongside the saltah, but I particularly enjoyed it with the charcoal-blackened fish and enormous, blistering flat breads cooked in the clay ovens at the restaurants in Sana'a, Yemen's capital city. 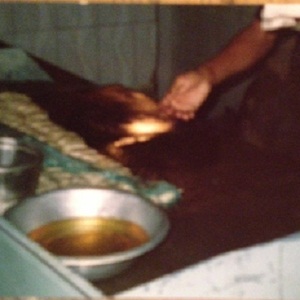 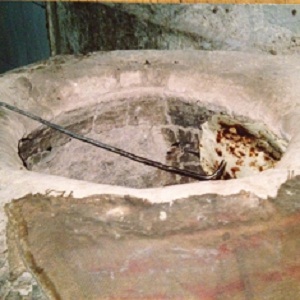 Unfortunately our Yemeni bread taboon oven here at The Spicery is on the blink, so I tried to recreate a simplified version of another type of Yemeni bread cooked in a frying pan. Lahohis similar to Ethiopian injera– a bit like a (fermented) cross between a pancake and a crumpet. Sponge-like, it's great for mopping up sauces and stews like saltah and dipping into zhugand hilbeh, but is also delicious for breakfast, rolled up and dunked in honey in much the same way as a Moroccan beghrir, alongside a cup of sweet tea.

On the subject of sweetness, Yemen claims to produce some of the most delicious honey in the world, including some with spicy notes of black pepper. Honey is one of the key ingredients of bint-as-sahn, which translates rather awkwardly as 'girl of the plate', or more poetically as 'daughter of the dish'. I've yet to discover how it got this name. Etymology aside, it's a delicious treat reserved for festive occasions and holidays, traditionally served fresh from the oven at the beginning of a meal, dripping with honey and clarified butter. It's made with an enriched dough that is painstakingly arranged in a special dish in sixteen wafer-thin, buttered layers, and topped with fragrant nigella seeds before baking.

Incidentally, nigella (or kalonji) seeds are mentioned in both the Koran and the Bible, and many Muslims today benefit from the healing properties of the spice's black oil. Attempts to recreate bint-as-sahn at The Spicery were somewhat thwarted by a teaspoon of over-enthusiastic yeast - compare the result with the picture below it of a more successful, previous home-effort. The third photo shows how it should really look - the centre-piece of a celebratory feast I enjoyed up in the mountains a couple of hours from Sana'a. It shouldn't resemble cheap, sliced white bread! Done properly, custom dictates that the layers should be thin enough to flick through, like a deck of (buttery, honey-drenched) cards. 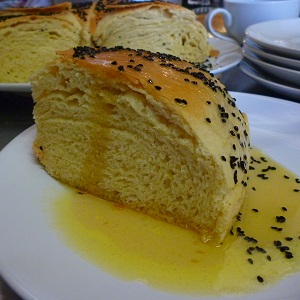 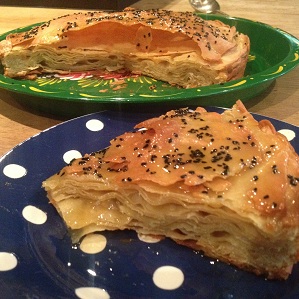 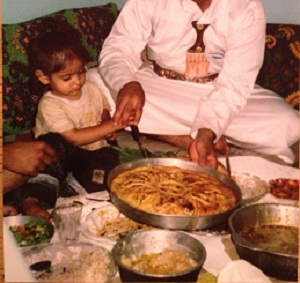 The Real Deal! Note the saltahin the bottom RH corner

And what to drink after a Yemeni feast? Despite coffee being a major export from the port of Mocha, the people of Yemen don't drink much of it. They do however make canny use of the much cheaper coffee-cherry husks or qishr, from the Arabic word for skin. These husks are boiled up with ginger, cinnamon or cardamon, (or any combination of the three spices), not forgetting tooth-meltingly large quantities of sugar. It's a refreshingly exotic brew, in an intriguing not-quite-tea, not-quite-coffee sort of way. The perfect accompaniment to breakfast, or as a digestive following a spicy meal of saltah and all the trimmings.