A journey of discovery in Addis Ababa 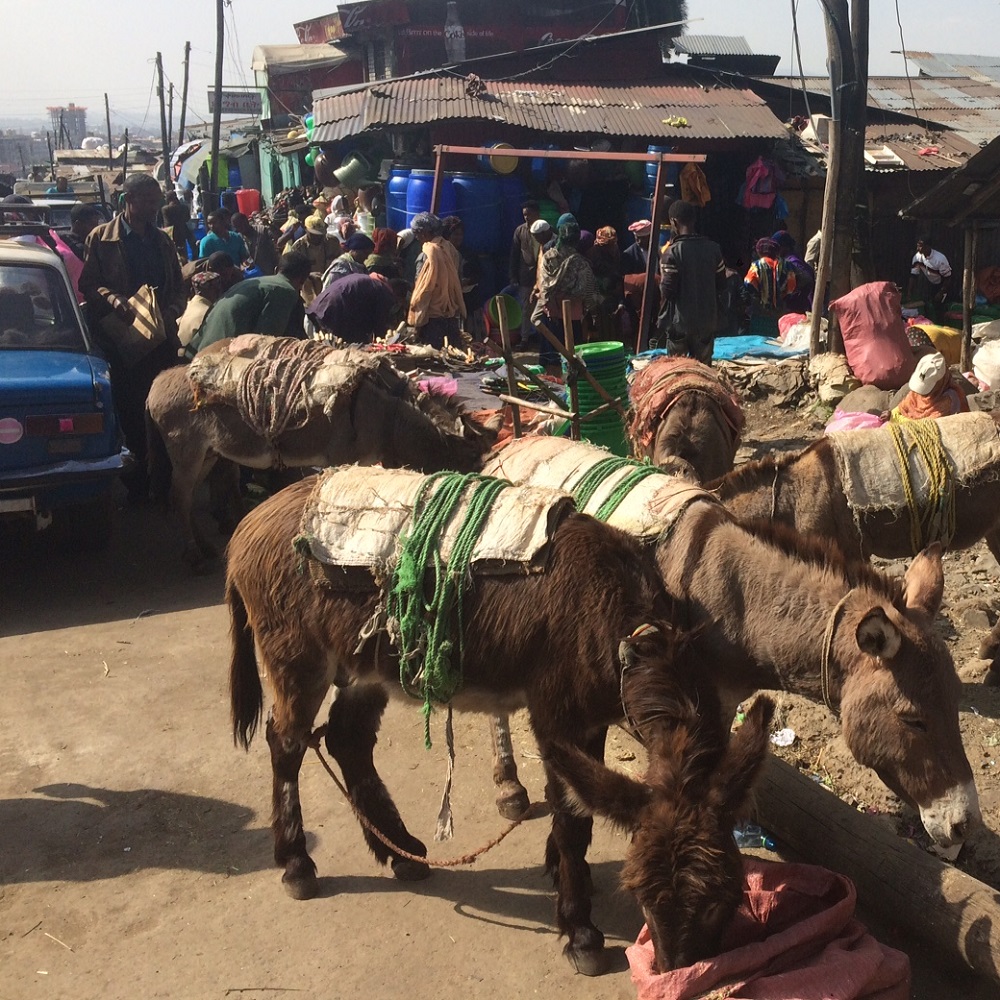 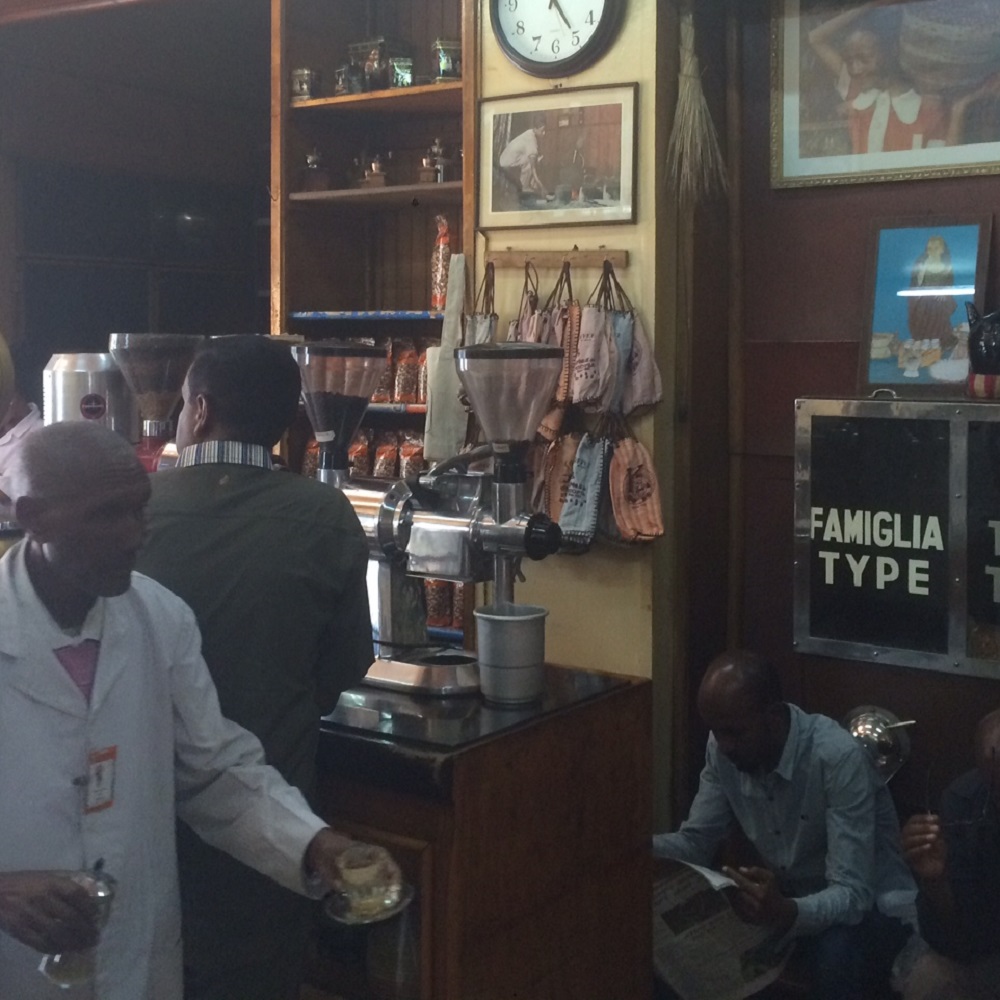 Like many children of the 1980's, Ethiopia was forever linked in my mind to images of famine, and well-meaning pop stars singing about the lack of snow in Africa. Having just visited, that idea is thankfully gone for good as the reality is the country is in the middle of a massive economic boom, and home to some of the most delicious food I'd ever eaten.

The capital, Addis Ababa, is green and low-rise with a beautiful highland setting and a fantastic climate. It's one of the few African countries never to have had a significant European colonial presence (apart from a brief intrusion by the Italians in the 1930's who left behind a few espresso bars and a local liking for slightly over-cooked spaghetti), so the food and culture are really unique and different from anything I'd seen before. 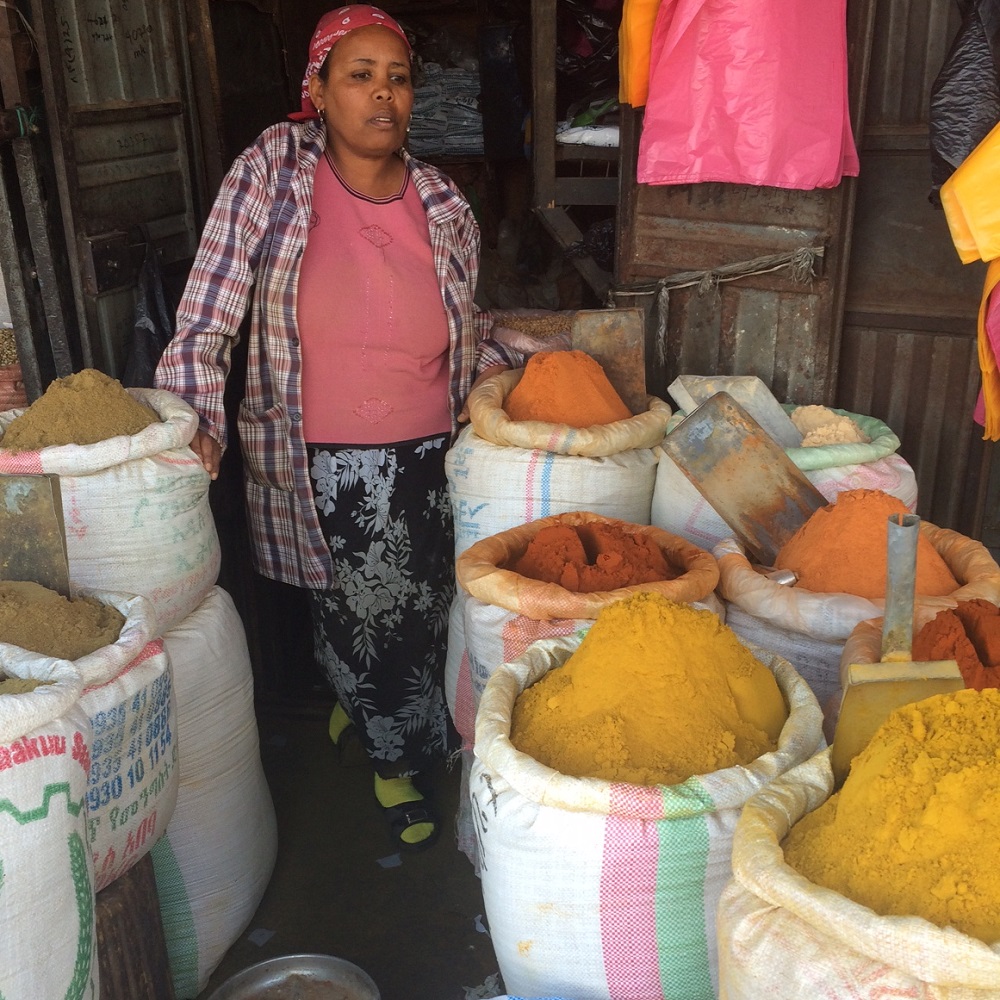 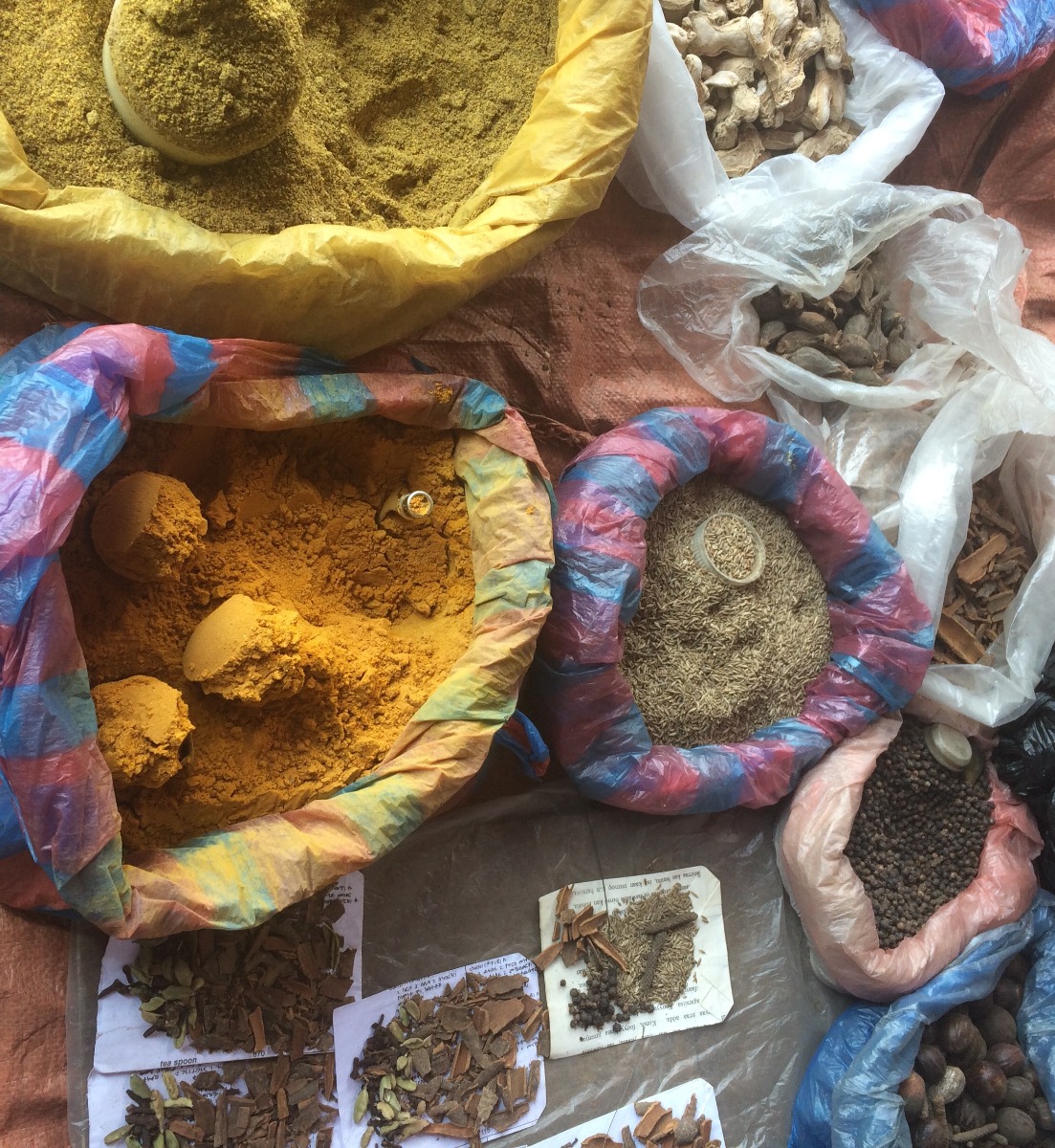 Ethiopian food is really interesting for us at the Spicery as it uses a lot of spices, but often in very unusual and unexpected ways. The closest equivalent I could think of was South Indian food where there are lots of different dishes served in a thali, with lentils and vegetables playing a key part. 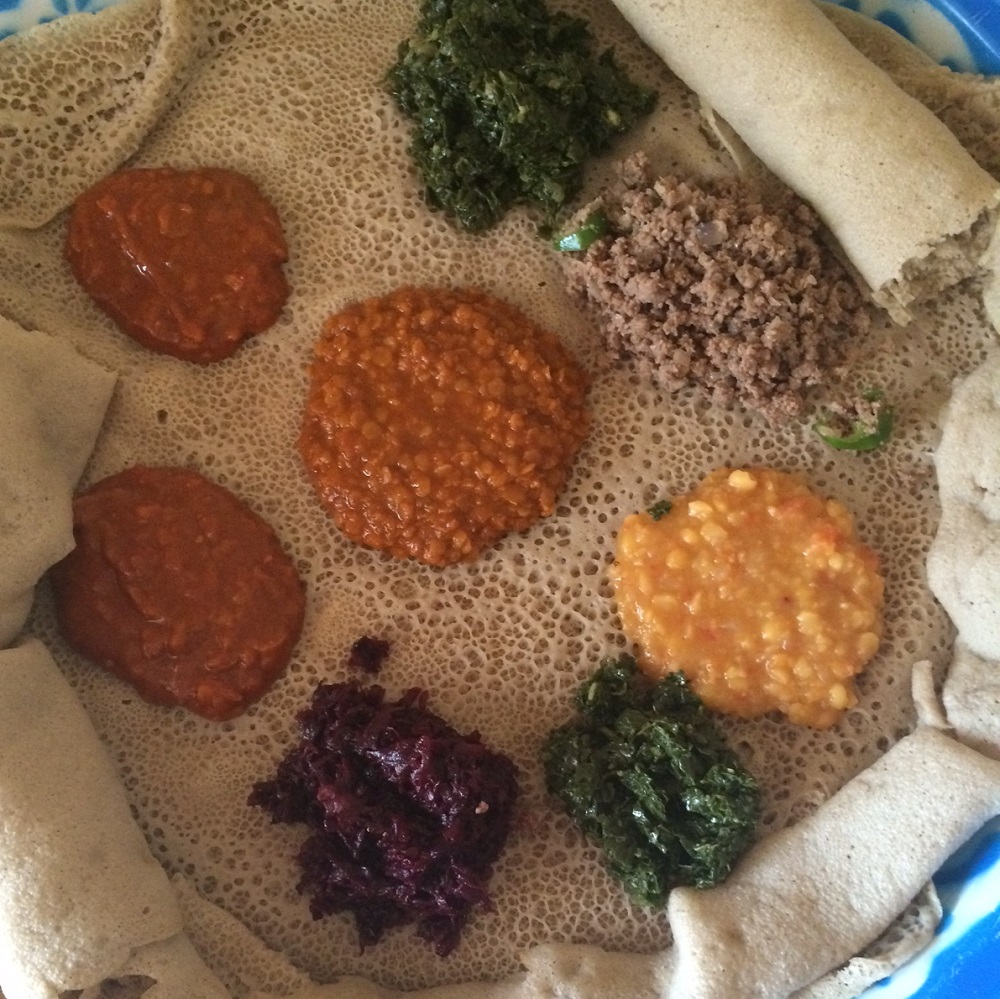 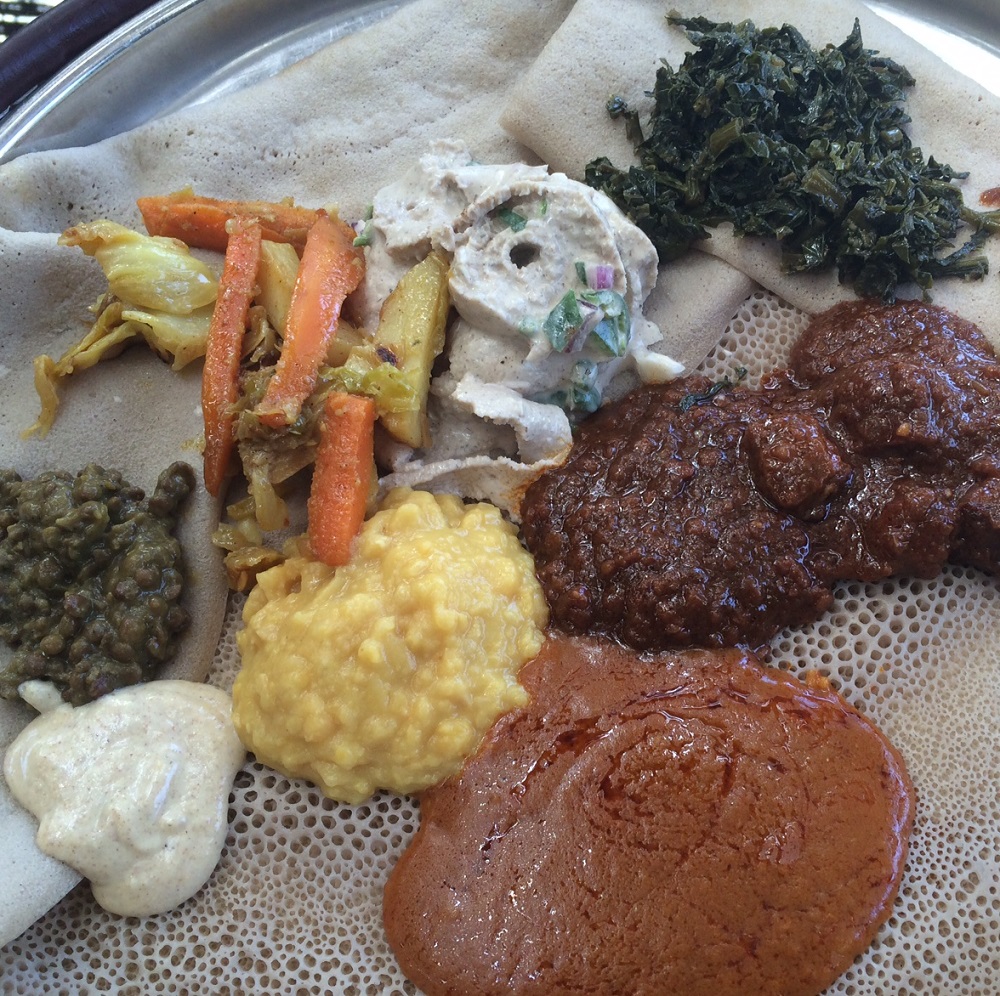 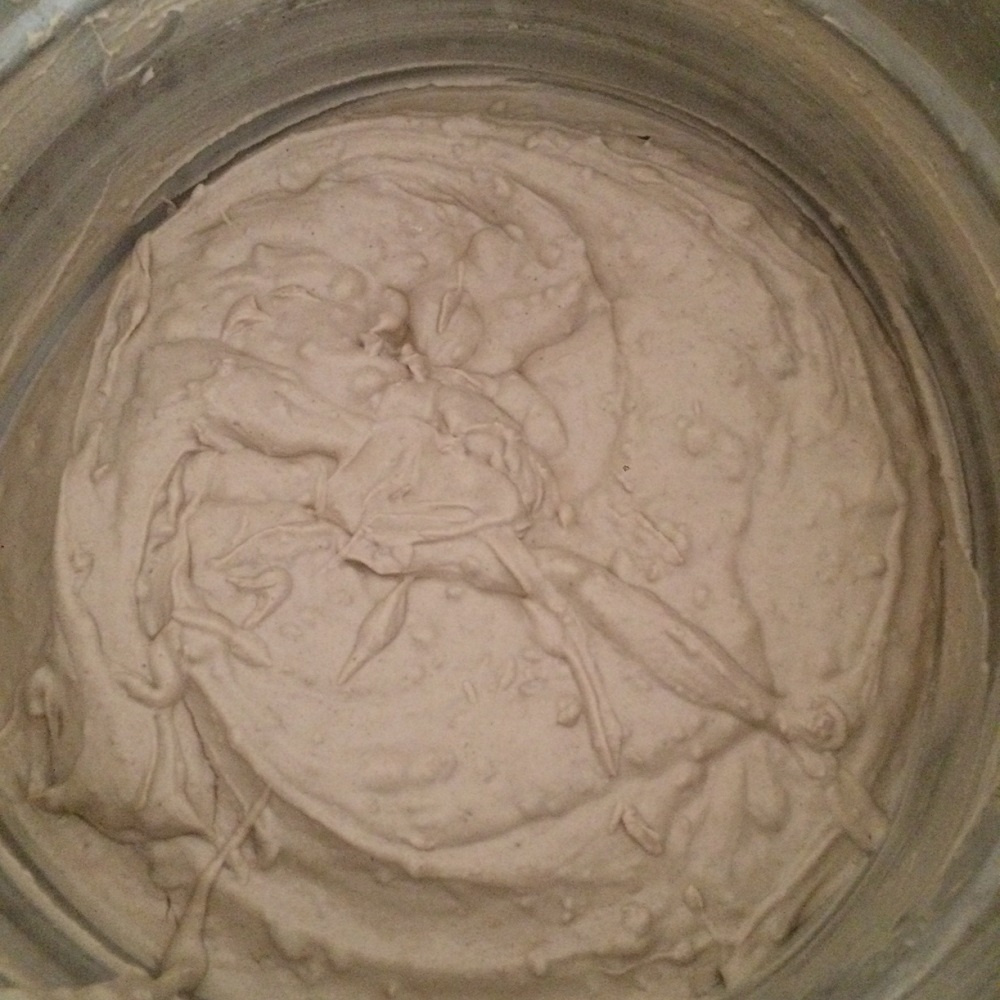 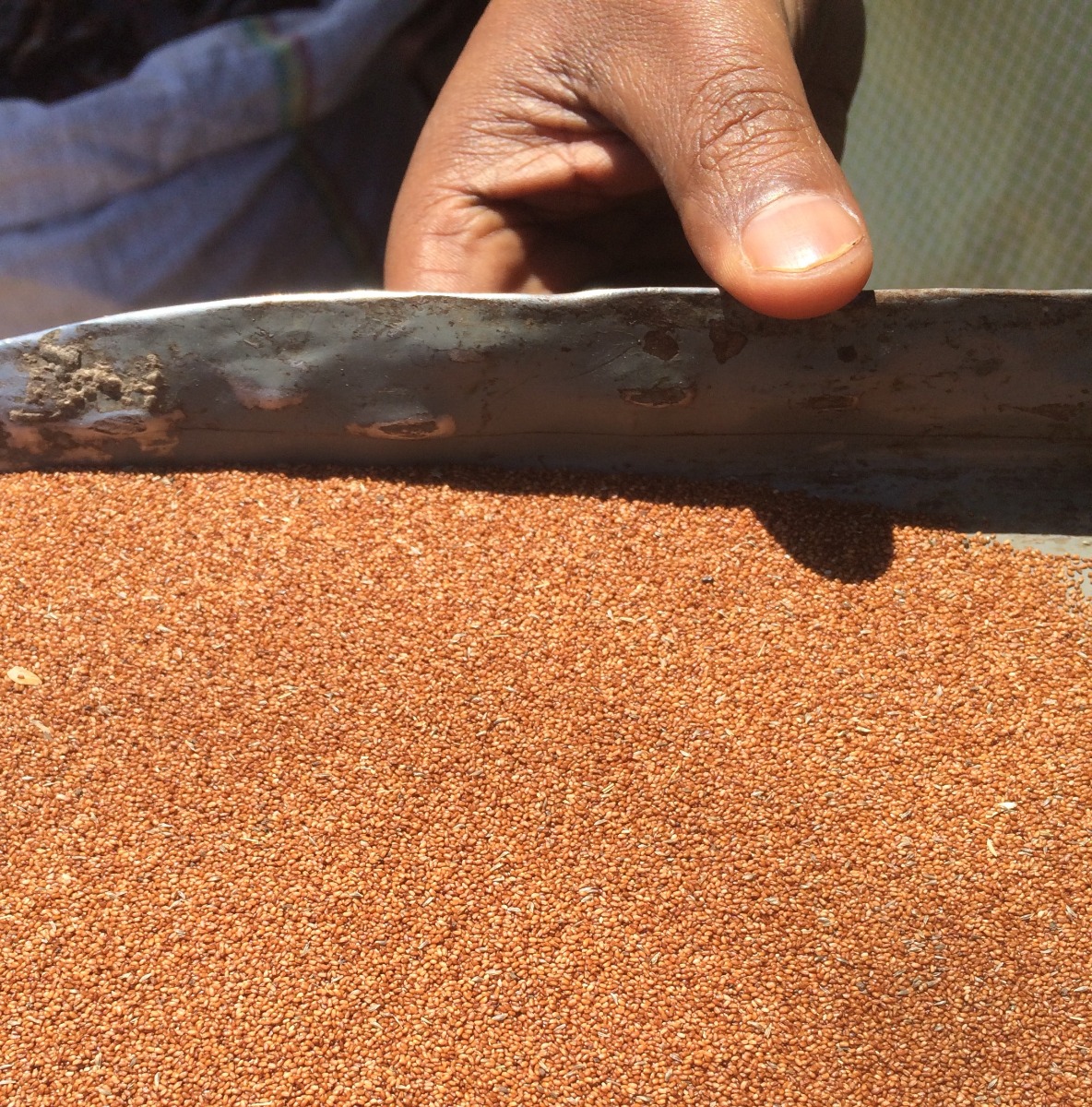 Injera batter / Teff grains for sale in the market

Every Ethiopian meal comes with several rolls of injera which is a sour fermented pancake made from a local grain called teff (it's not a million miles away from a dosa, the South Indian pancake made from fermented rice and lentils). Most homes seem to have a batch of injera batter fermenting slowly in the corner, and a special flat cooker used to make fresh injera for every meal. When cooked it's hard to avoid the fact they look a bit like a cross between a damp dishcloth, a crumpet and tripe, but the spongy texture works really well at absorbing all the flavours of the food and they're apparently very nutritious. They're also very useful as a kind of edible plate, as all the dishes are served on an injera then you just tear off a piece with your hands and dig in! 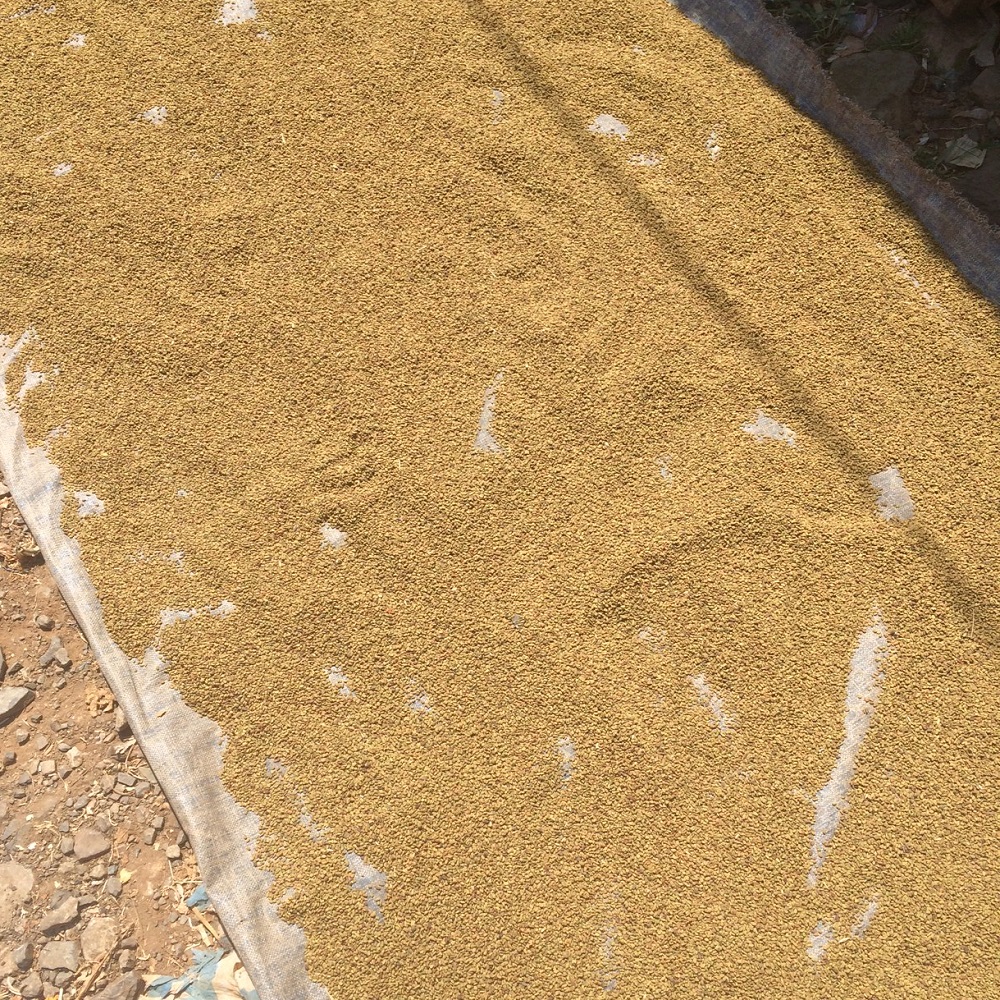 In terms of seasonings, the key ingredient is a blend called berbere (pronounced ber-ber-ray). It's kind of an all-purpose seasoning and forms the base for many Ethiopian dishes. It's available in the markets but many home cooks seem to make their own and the component ingredients tend to include ginger, cardamon, ajowan, cumin, coriander, fenugreek, nigella, long or black pepper, garlic, onion, salt and a very mild red chilli (also confusingly known as berbere) that's a bit like a Mexican guindilla chilli. 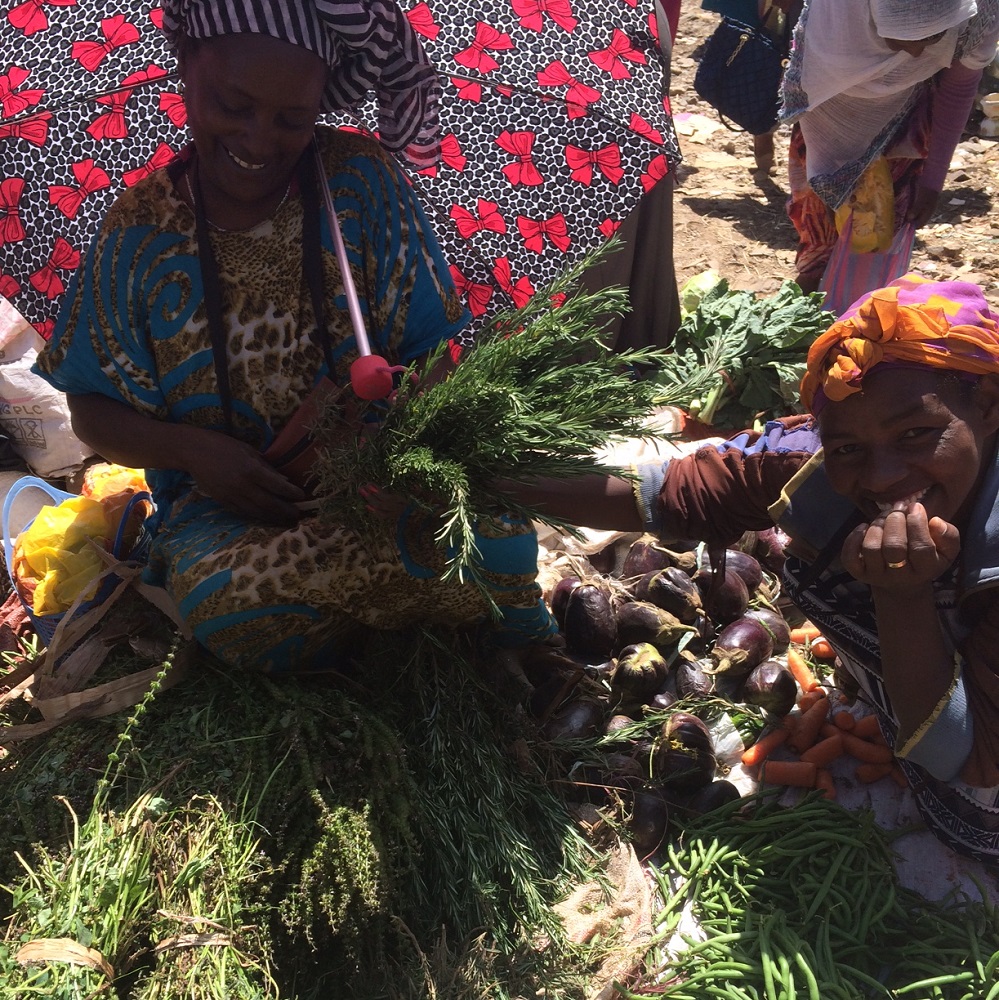 The other main ingredient are herbs which are often used to make a seasoned butter called niter kibbeh that's used as a cooking ingredient. Sacred basil, rosemary, garlic and cardamon are heated gently in the butter then strained out and the seasoned butter is added to your cooking for fragrance and richness.

I was surprised to see herbs like thyme and rosemary in the markets as I'd always assumed they were Mediterranean but apparently they're very popular in niter kibeh as well as in herbal teas!

One of the other big surprises for me was how carnivorous the average Ethiopian seems to be. Meat (usually beef or chicken) features heavily in the food, apart from Wednesdays and Fridays which are fasting days. A big favourite in Addis is kitfo - minced beef flavoured with spiced butter which can be served raw (just warmed slightly from the butter), or cooked. 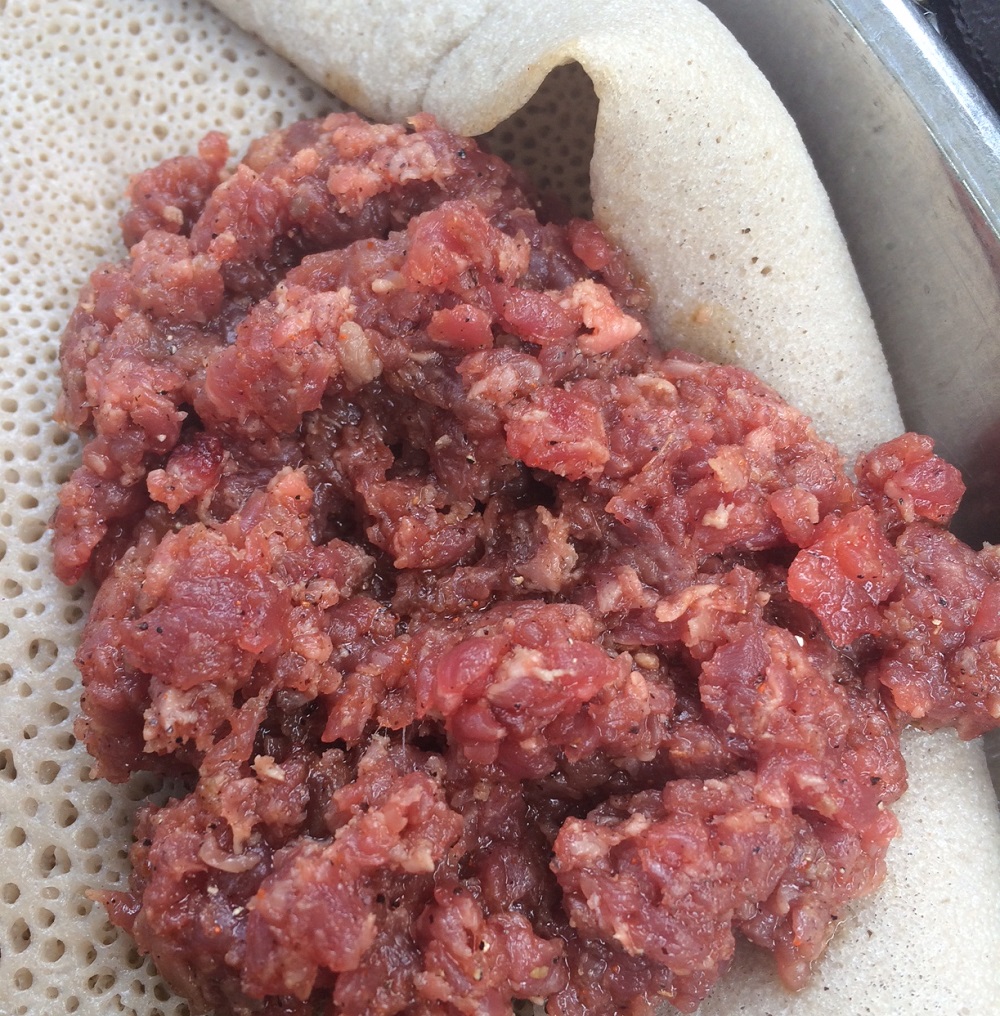 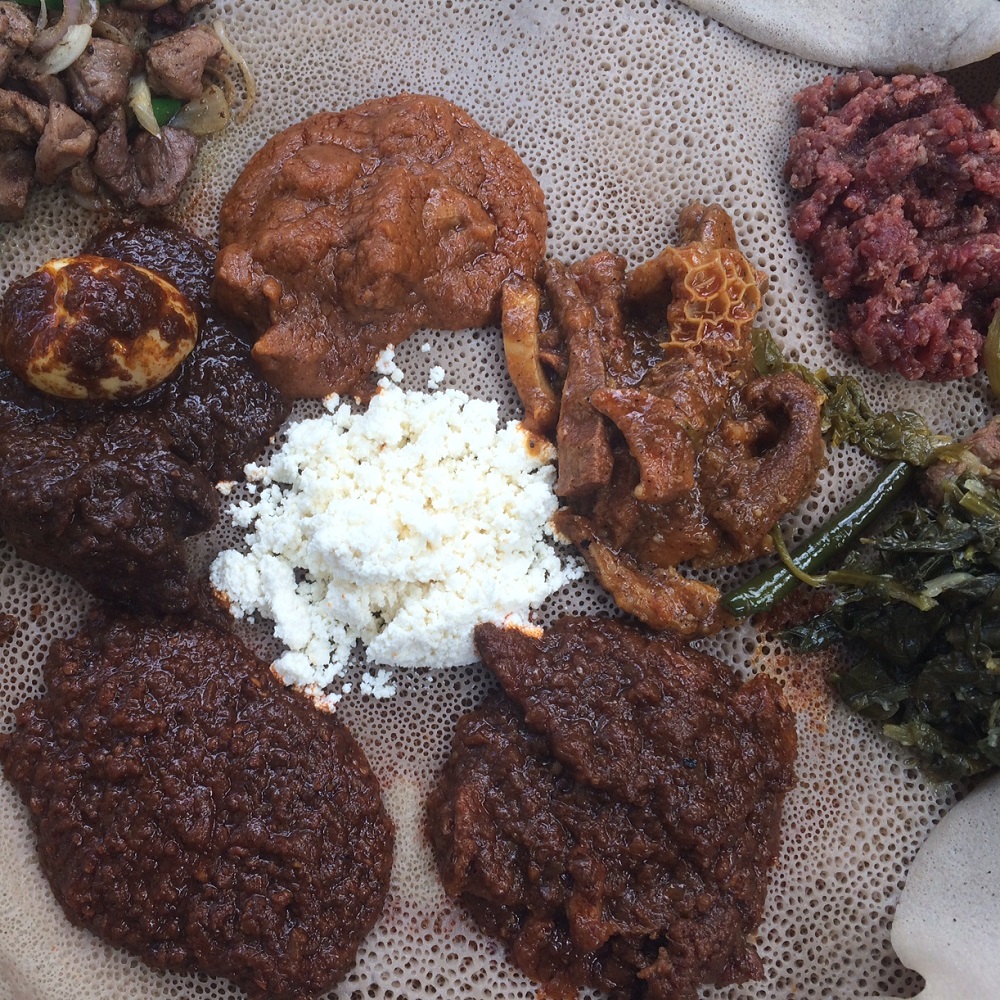 There are butchers on the street where you can literally pick a piece of meat you like the look of, and they'll chop it finely for you and serve it raw right there in the shop. Seasoned with a little bit of spiced butter it's really soft and luxurious to eat - a bit like a slightly spicy steak tartare.

Even the drinks are unusual and delicious in Ethiopia! A local favourite is honey wine (which is like drinking alcoholic nectar), but it's also the birthplace of the coffee bean (although Yemen claims they were the first to actually make a drink from it), and coffee now represents a core part of Ethiopian daily life. All around town there are stand-up coffee bars which are a legacy from the Italians in the 1930's where you can grab a machiatto or espresso, or there are the Ethiopian coffee stalls which are rather more relaxed affairs. Here you sit around on comfy low stools with the air scented by incense, as a lady (it always seemed to be women who make the coffee, while the men drink it), roasts fresh green beans over charcoal then grinds them up and boils the powder in a special pot with a tall spout to make the most delicious fresh coffee you've ever tasted. It's served black with plenty of sugar and a sprig of tena adam (a local herb that tastes a bit like tarragon crossed with thyme). 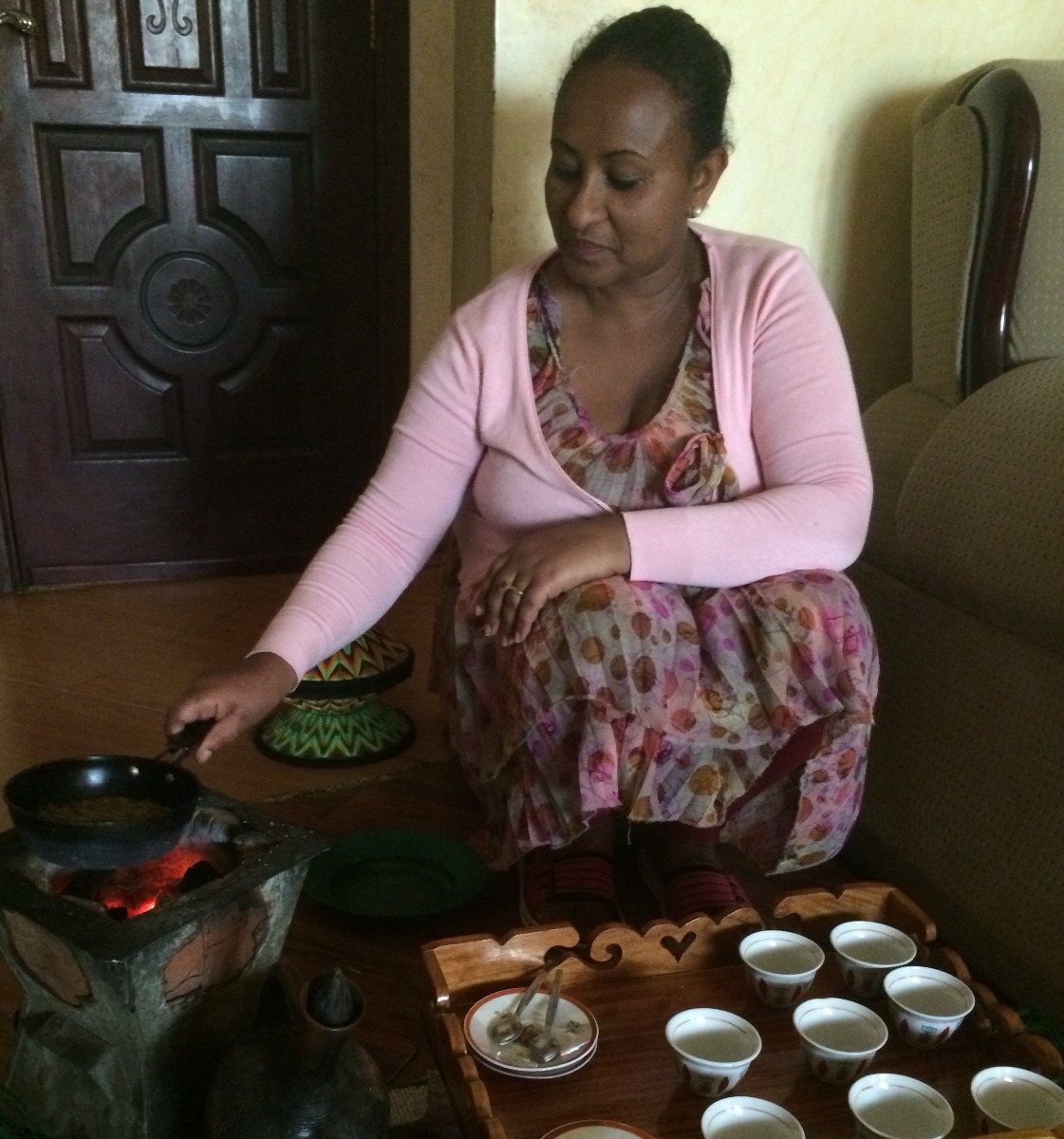 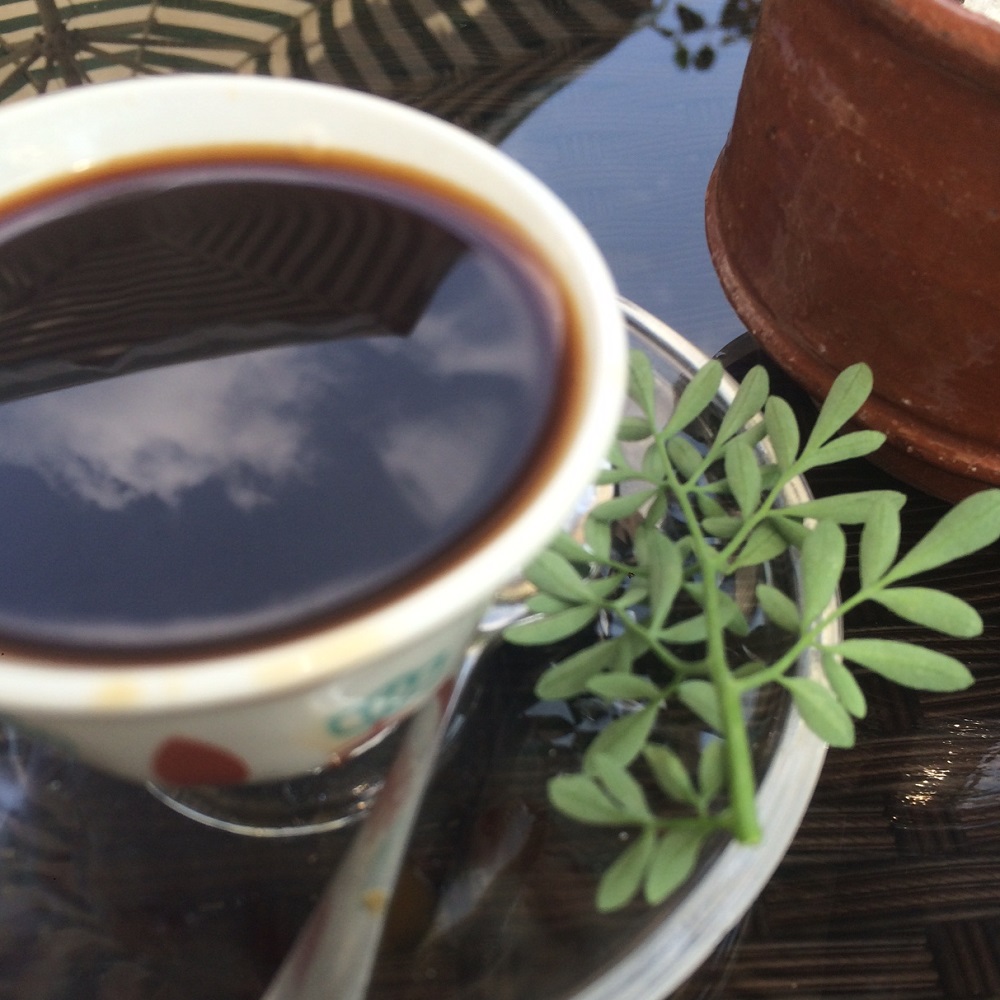 After learning how to make shiro in Addis, I tried my own back in the Spicery kitchen. Not bad (although the injera needed a bit of work...), so look out for a few Ethiopian dishes in your spiceboxes over the next few months as the delicious food of this amazing country should be more widely known. I hope you enjoy it as much as I did! 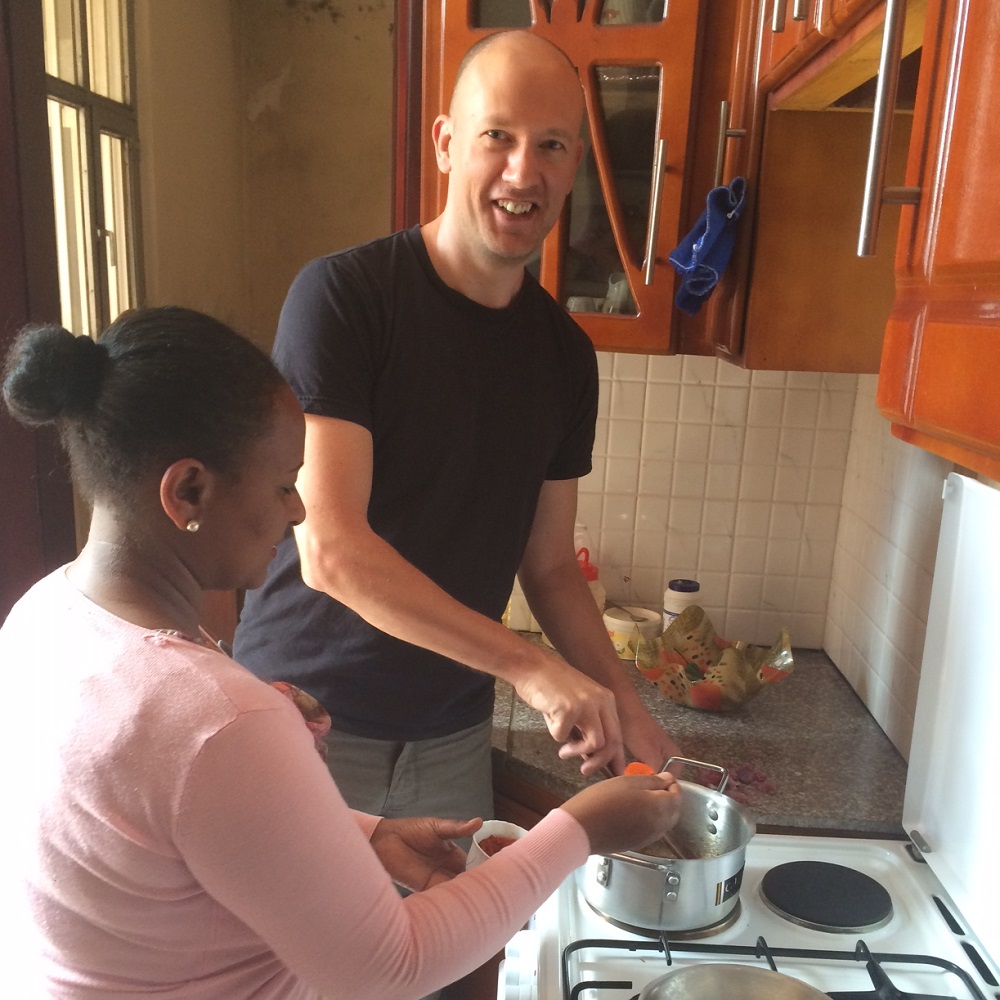 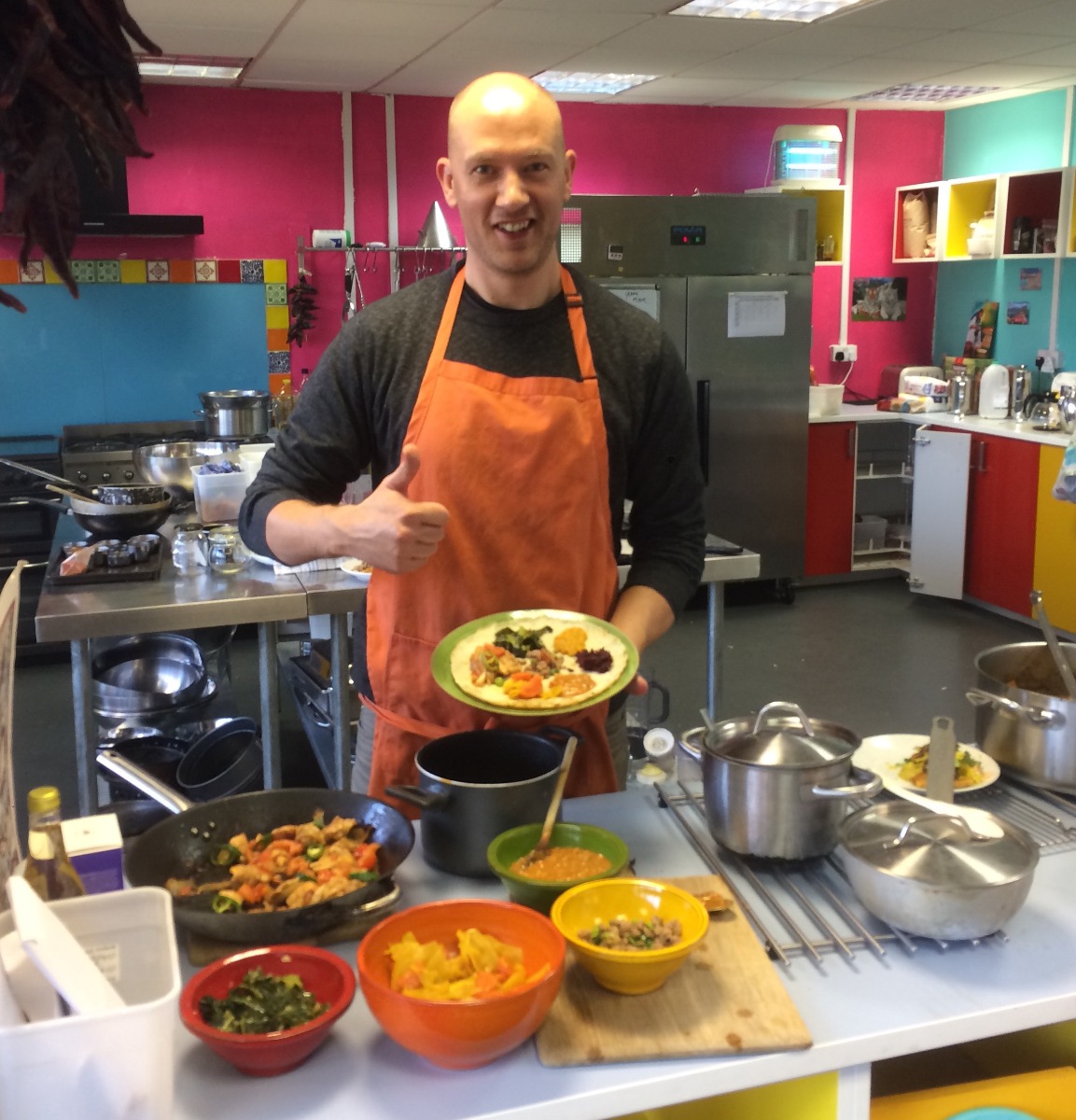