Every Georgian Dish is a Poem*

I'd started planning a trip to Ethiopia when a friend of mine emailed with rave reviews from colleagues who'd just been on a walking trip in Georgia and were blown away by the people, food and countryside. Ethiopian plans on the back-burner, we immediately booked flights to Tbilisi and started planning. My friend, where to go walking. Me, where and what to eat. 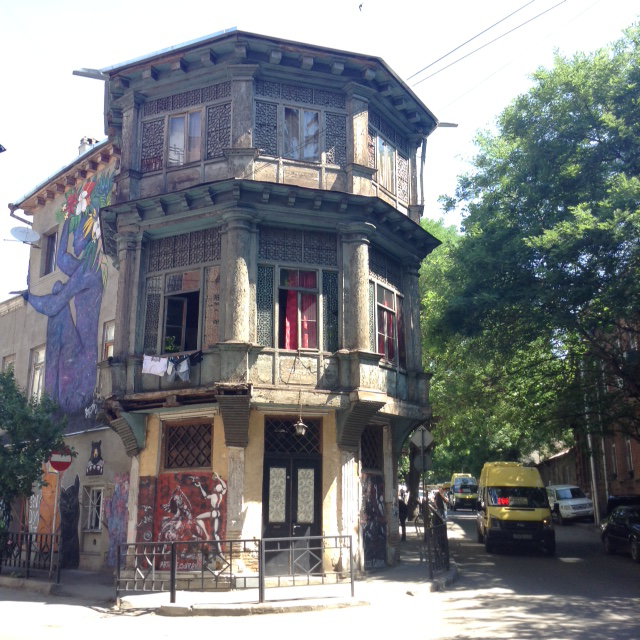 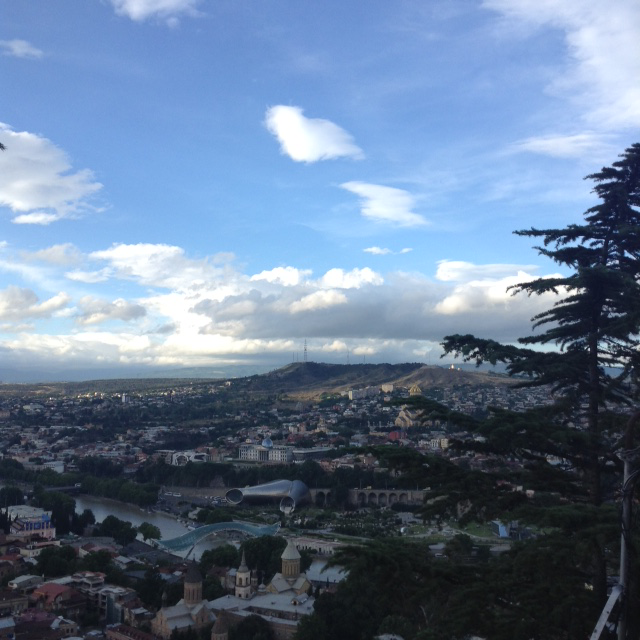 Knowing absolutely nothing about Georgia (apart from it being Stalin's birthplace), I was looking forward to trying the food and started doing a bit of research so we could track down the best things to eat - we had two weeks to explore. I was excited to read about spices I'd never heard of, so not long after we'd touched down in Tbilisi we hit the markets and found an impressive variety of herbs, spices and unusual spice blends.

Blue Fenugreek
Known as UTSKHO SUNELI, this is a really important spice in Georgian cuisine. It belongs to the same family as Indian fenugreek, but it lacks any bitterness, and is sweeter and milder. The name in Georgian literally means 'suddenly appeared spice' on account of the amazing aroma that's released when the dried seeds are ground. It had a savoury, umami type flavour and is very often used in meat dishes and in recipes containing walnuts. It's also a crucial part of a delicious Georgian salt blend called Svaneti salt.

Khmeli Suneli
KHMELI SUNELI literally means spice blend in Georgian, and the blend can vary widely depending on what the cook is using it for. It contains between 10 and 15 different spices and herbs, typically with a base of ground coriander seeds. Blue fenugreek, black pepper, Imeretian saffron, chilli and aromatic herbs such as dill, wild mint and summer savory are also often added. It's a versatile blend, used as a marinade for anything and also added to soups, stews, sauces and even salads. 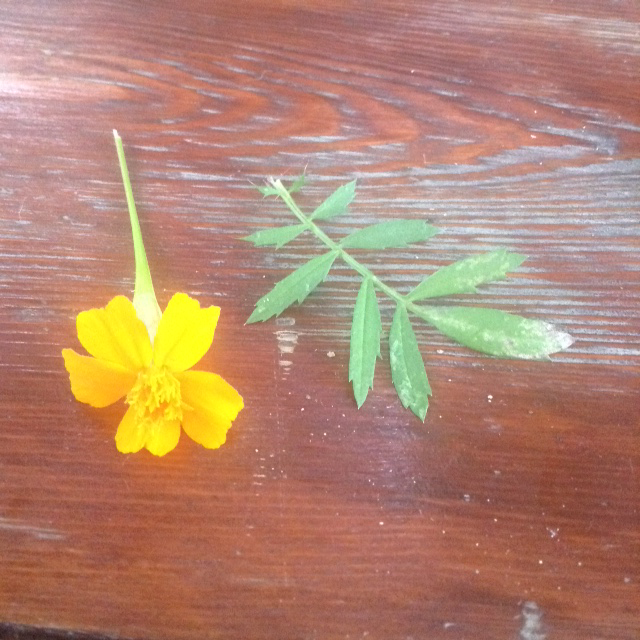 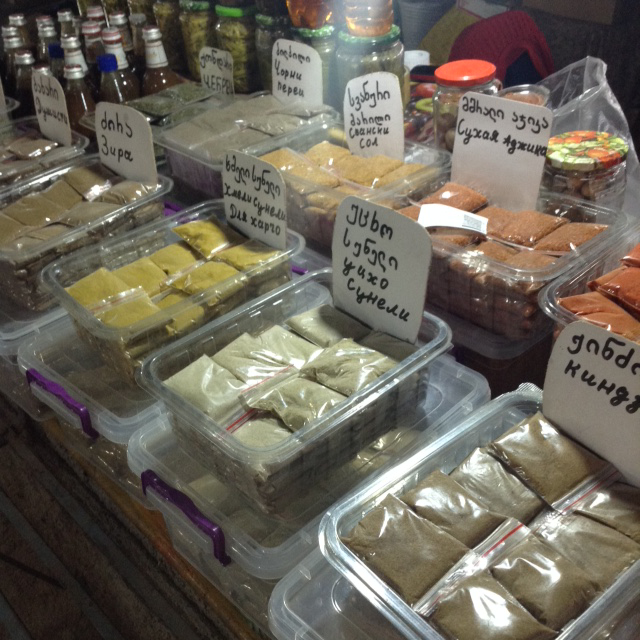 Imeretian Saffron
This is tagetes, known as French marigold, or KVITELI KVAVILI in Georgian. I've never seen this used as a spice before - the flower is dried and the petals are ground to a powder that looks a bit like very orange turmeric. It has a really nice earthy, mildly spicy sweet flavour that works well in soups and stews - fry it in a little butter and pour it onto soup just before serving, a bit like an Indian tarka. The leaves are used fresh in salads, too. 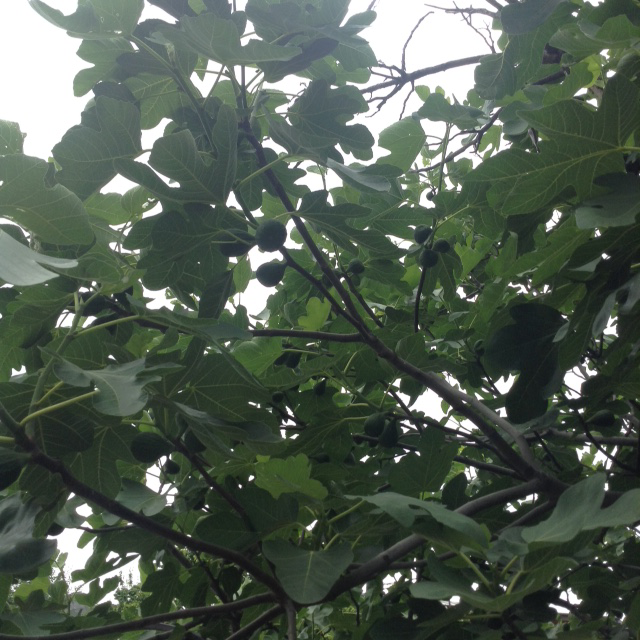 Tklapi
The Georgian people are very connected to their land, eating seasonally from an amazing variety of fresh and plentiful produce. Visiting in early summer the trees in the cities and countryside were dripping with fruit - mulberries and cherries everywhere ripe and falling, staining cars and streets. With so much fruit, the Georgians are masters at preserving - from pickles and jams to fruit leathers and ferments. Travelling to the east of the country all along the sides of the road huge fruit leathers or 'tklapi' hang from frames and stalls in all colours, yellow, pink, purple, black, red, green (plum, apple, apricot, cherry, strawberry, even kiwi). 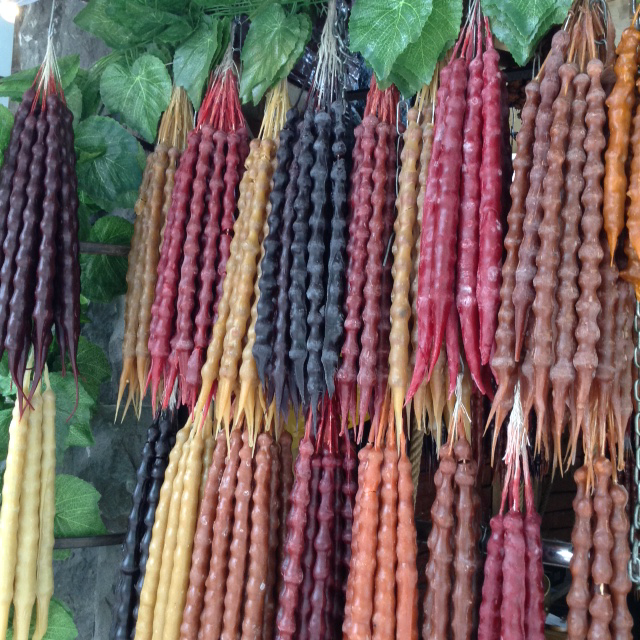 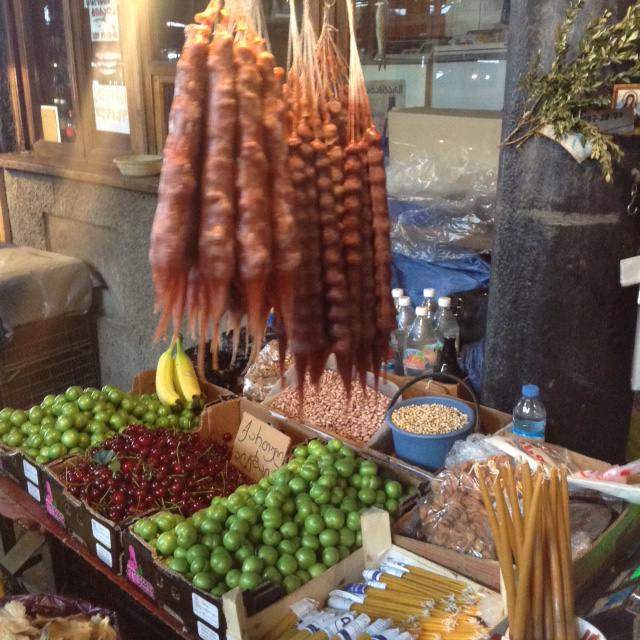 Churkhela
Continuing on the preserved fruit theme, beautifully arranged stalls all over the country display an unusual speciality, 'churkhela'. Resembling lumpy wax candles or huge salamis from a distance, they're actually strings of walnuts or hazelnuts that have been dipped over and over in a thick, sticky grape syrup during the grape harvest. A high energy snack, apparently they're carried by Georgian soldiers - one single stick supposedly contains enough calories for a whole day, but they're delicious as a civilian snack to tide you over until your next meal.

Feasting
Huge feasts are traditional in Georgia, and a meal is served with seemingly endless different dishes all laid out on the table at once, including meat dishes and vegetable ones. Georgian hospitality is incredible, and feasting and drinking can go long into the night, with lots of homemade wine to enjoy, and if the party gets going a grape alcohol called chacha is likely to make an appearance. At a traditional supra or feast there will be a ceremony of toasting led by the toast master or master of the house. Once the guests, family, friends, ancestors, winemaker and others have been toasted, all guests are welcome to toast whomever or whatever they choose. You shouldn't drink anything outside of the toasts (wine is never drunk without toasting!) but when you do drink, it's generally down in one! 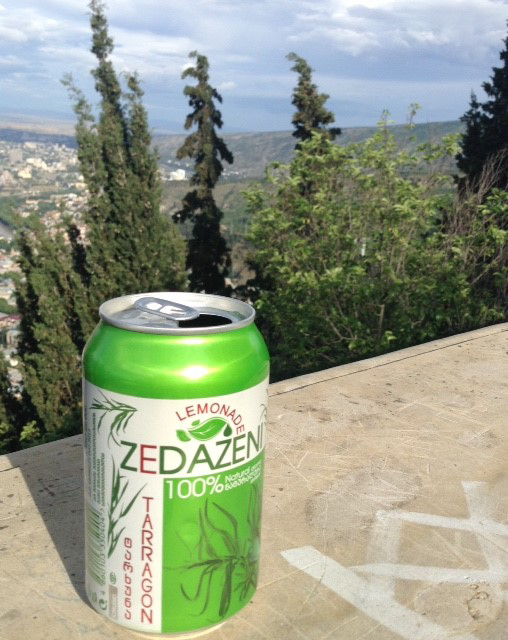 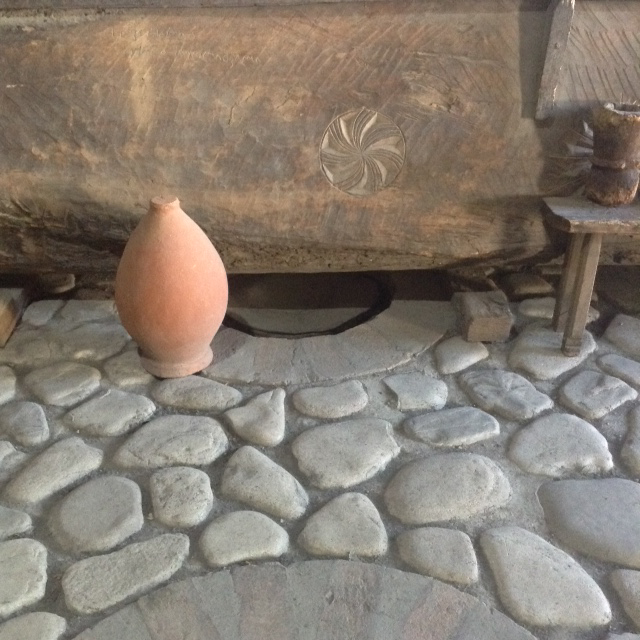 Drinks
Tarragon is a really popular herb in Georgia, and is the flavouring for a deliciously sweet, fluorescent green fizzy drink called 'tarkhun' (Georgian for tarragon). Everywhere you find bottles and cans of Coca Cola you'll find tarkhun glowing green alongside. You can also find a Georgian soft drink made of soda and syrup called Lagidze nectars or waters, mixed from beautiful old fashioned glass dispensers, in lots of different fruit flavours. And then there's Georgian qvevi wine, fermented in huge amphora underground to produce a wonderful, orange wine with apricot flavours. 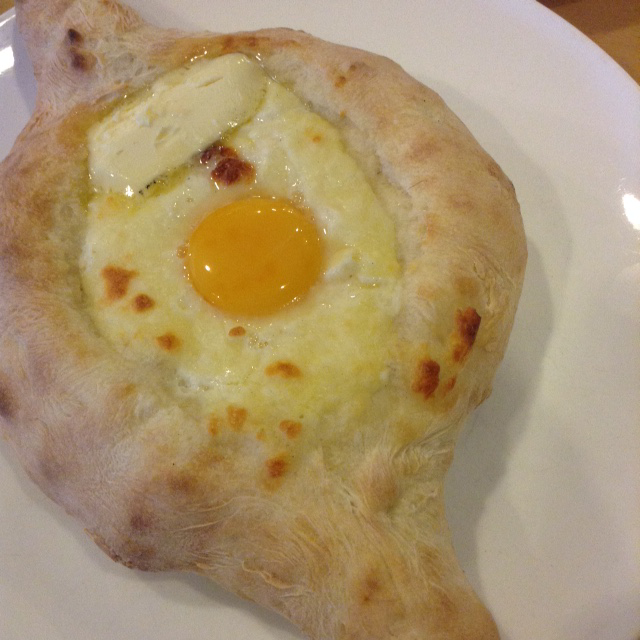 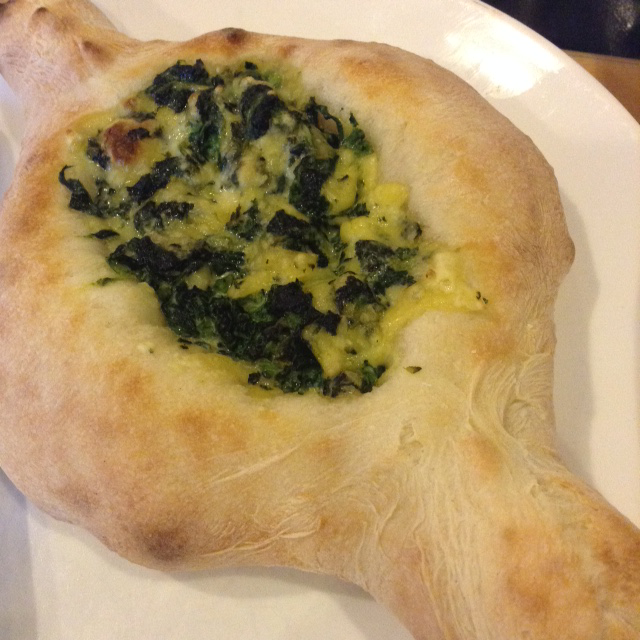 Kachapuri
It's hard to miss 'kachapuri' in a trip to Georgia - everywhere you go you'll see pictures of this national dish. Similar to a pizza or a Turkish pide, it's a boat shaped bread filled with cheese (or meat), topped with butter and sometimes a fried egg. You tear off the edges to dip into the cheese fondu in the middle. Goes very nicely with a bottle of Georgian Argo beer!

It so happened that the walking part of our trip went out the window when we discovered that heavy rains had washed away all the bridges at the base of the Caucasus mountains in the east of the country. Happily we could still enjoy eating our way around the country, walking between restaurants and markets!