A Spice Tour Of The Isle Of Spice...

Grenada! A small country in the south of the Caribbean with a population of about 100,000 in around 350 square kilometres of land. To put that into perspective, the small city of Bath (first home of The Spicery) has a population of just under 100,000 people, in an area about a 10th of the size. 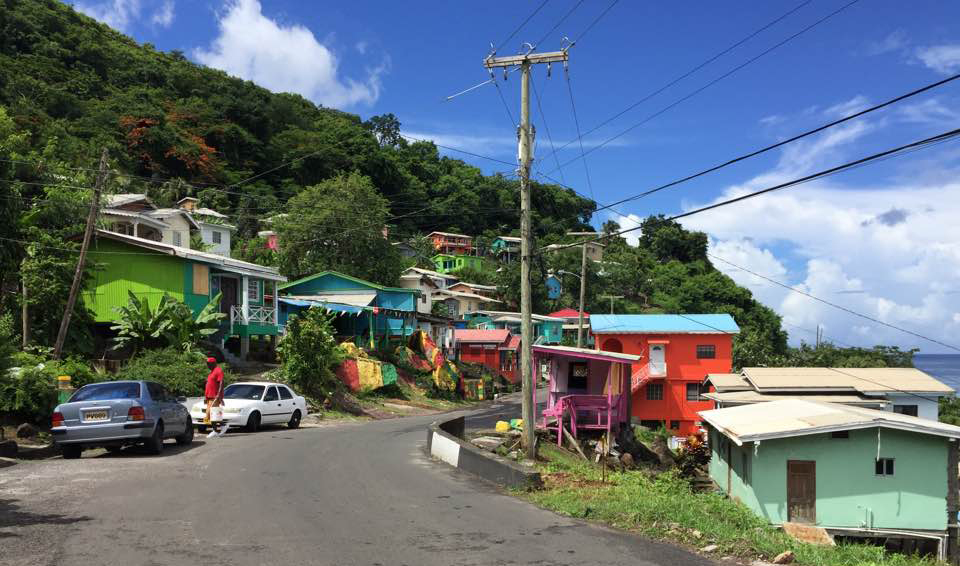 My dad and I took a trip out to Grenada in July, the height of rainy season.
There are no direct flights to the Island from England so after Island hopping to Antigua, Dominica and Barbados we finally touch down in the ISLE OF SPICE

In Grenada everyone seems to know everyone- As my father's side is from the island he seemed to be connected in some way or another to everyone we met. My aunt also joined us later on in the trip and it would test my patience as we'd stop or be stopped (very often!) to catch up with old friends- If we were just vaguely connected, they'd know of the family house or of a distant relative or perhaps indulge us in some gossip of an old neighbour... 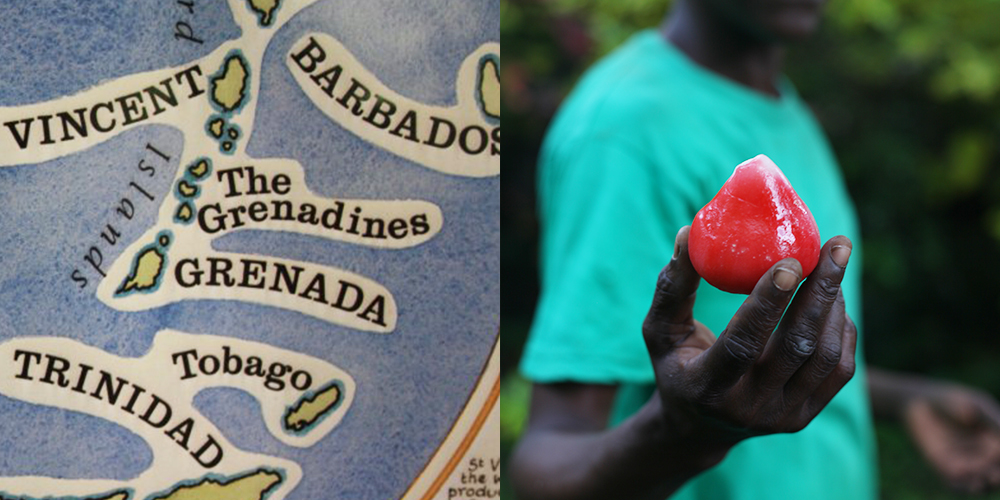 The few times I've been to the Island I've noticed the huge quantities of dried spices and unfamiliar fruits (wax apple pictured!) sold at the morning markets. Men and women will call from little stalls on the side of the road- shielding themselves from the sun (and sudden rain showers) with bright umbrellas.

The atmosphere of the market is bustling but with this sleepy and relaxed quality. No-one moves too fast here, and I think it might simply be too hot to!
I learnt quickly to not put time constraints on the day's activities, it all just works better if you relax into the Island's slow rhythm of life. 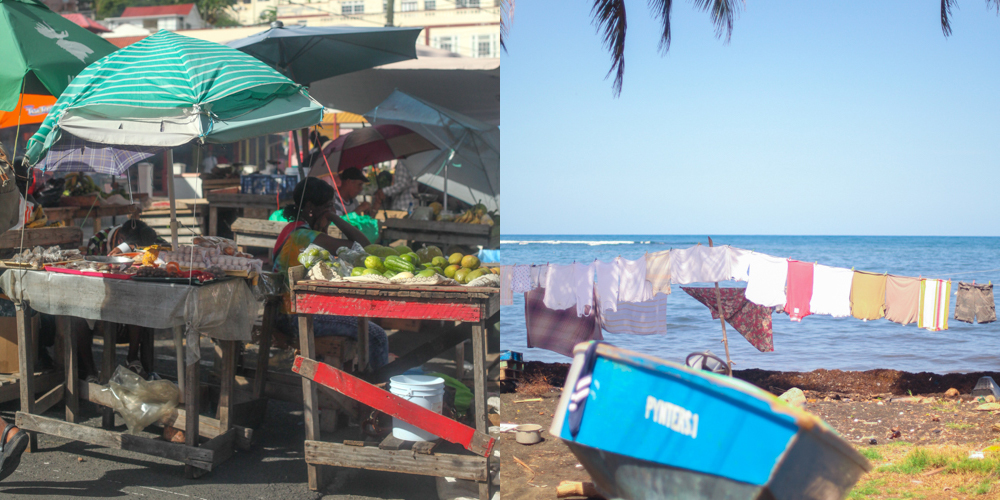 Though I had always seen nutmeg as the defining spice of Grenada (it features on the national flag), I had never really ventured to find out exactly which other spices were being sold or how any are grown or harvested.
Three spices in particular are often used together in cooking on the island. One popular use is in the famous ‘Cocoa Tea’, which is like a sweet spiced hot chocolate drink commonly served at breakfast. Handmade balls of cocoa infused with the spices were sold at every market and supermarket. In the mornings they're dissolved in water over the stove and sweetened with plenty of condensed milk. 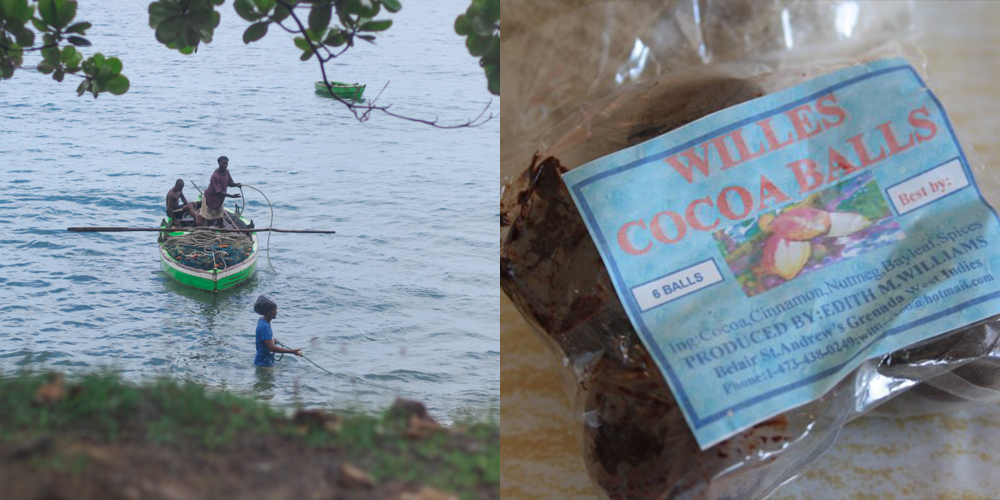 The Gouyave nutmeg processing station is the largest on the Island, in a small fishing village on the west coast. 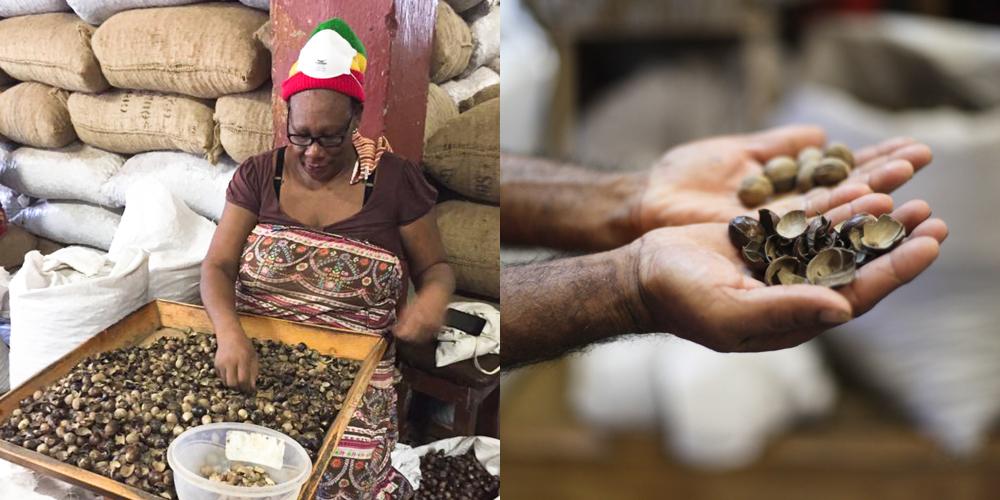 I had a look at the different processes going on in the huge factory- from the mace grading to sorting through the nutmeg.
A group of women sit in a ring inspecting each nutmeg seed for discoloured, mouldy or empty kernels. They are then graded by density by dropping full baskets of them into tanks of water (the higher grade nutmeg will sink, and the unfit kernels will float)

Mace is bought dried, either as No.1, No.2 or No.3 in quality. No.1 is the better quality, dark red, unbroken, dried and unblemished. 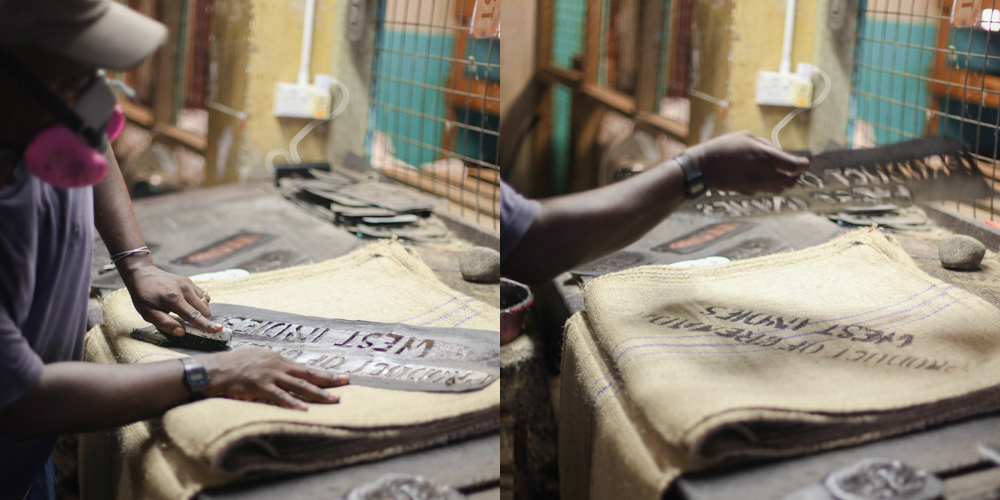 The nutmeg is sent all over the world in large sacks, all hand stencilled for their destination.
(This one was sent out to Rotterdam) 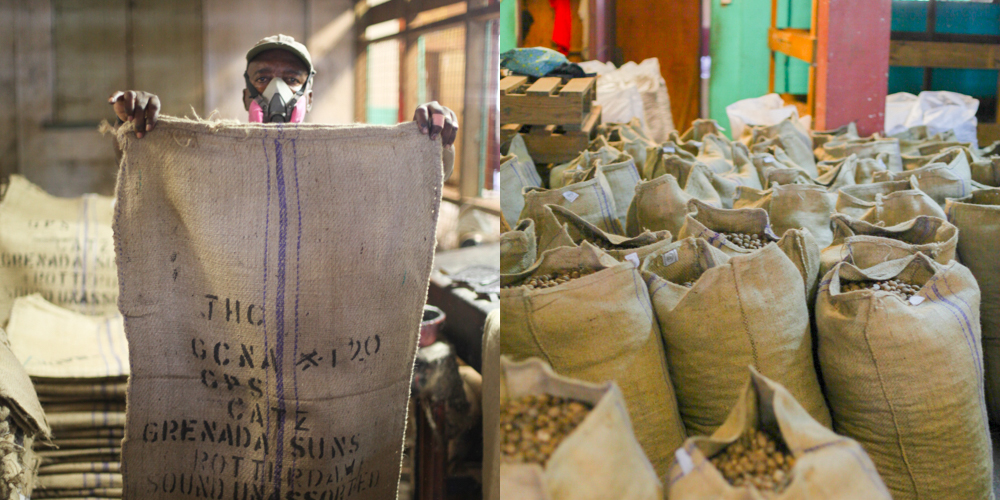 After seeing the more industrial side of the process, I wanted to see how the nutmeg was grown. Conveniently, a distant second cousin owns a small organic farm predominantly growing spices on the Island...

'The Tower', an old plantation house on the hill visible from my grandmother's house, with one and a half acres of land filled to the brim with every spice the island has to offer (Vanilla, Ginger, Turmeric, Pimento, White Pepper are just a few!). Farmer Augustine took me on a little tour of their three most used spices- Cassia cinnamon (locally referred to as 'spice'), Bay leaf and Nutmeg...