The pepper gardens are hidden deep in the hills of South West India, in an area that straddles Kerala and neighbouring Tamil Nadu. Everything is incredibly lush with deep green wild forest and it feels like one of those places that's so fertile you can almost see the plants growing around you. 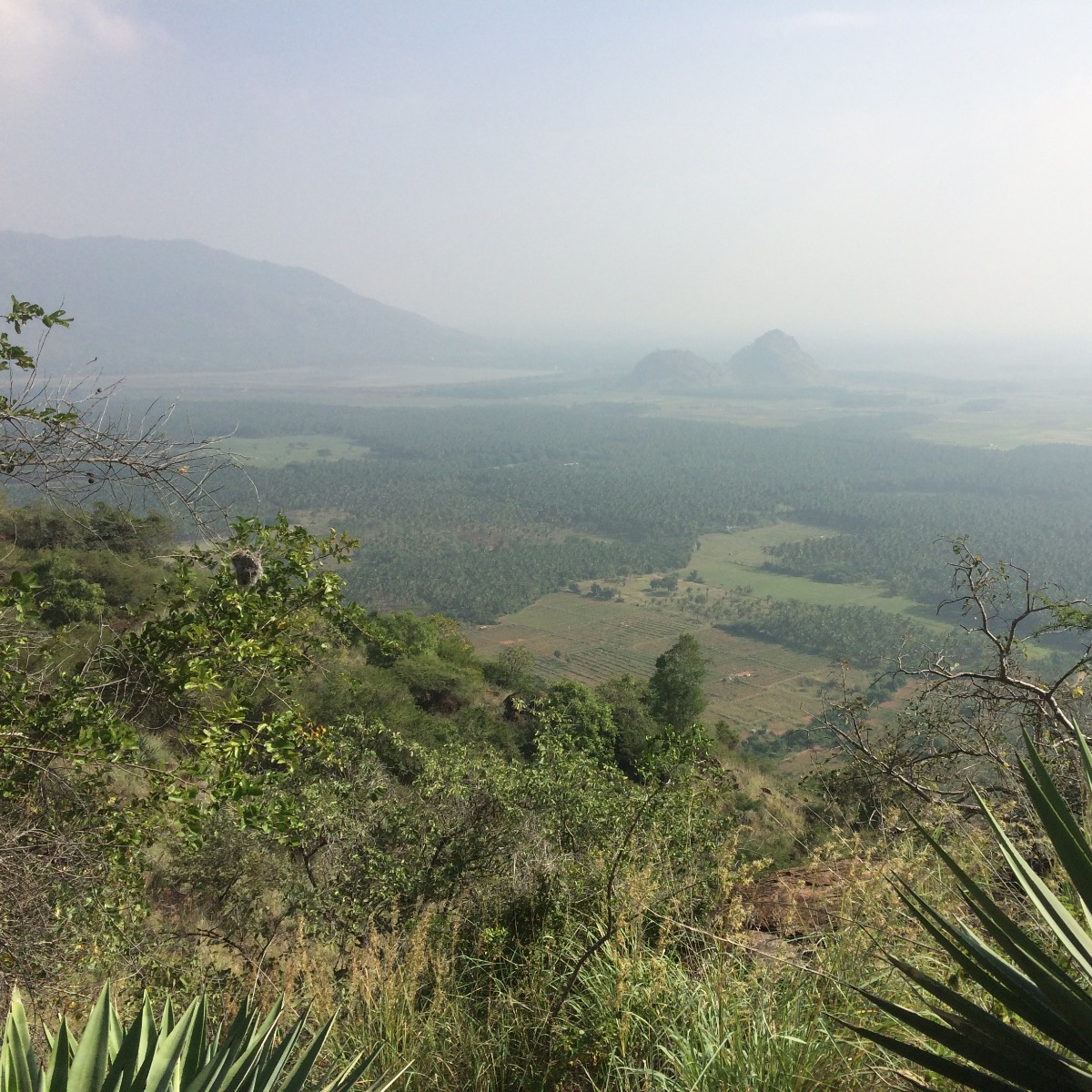 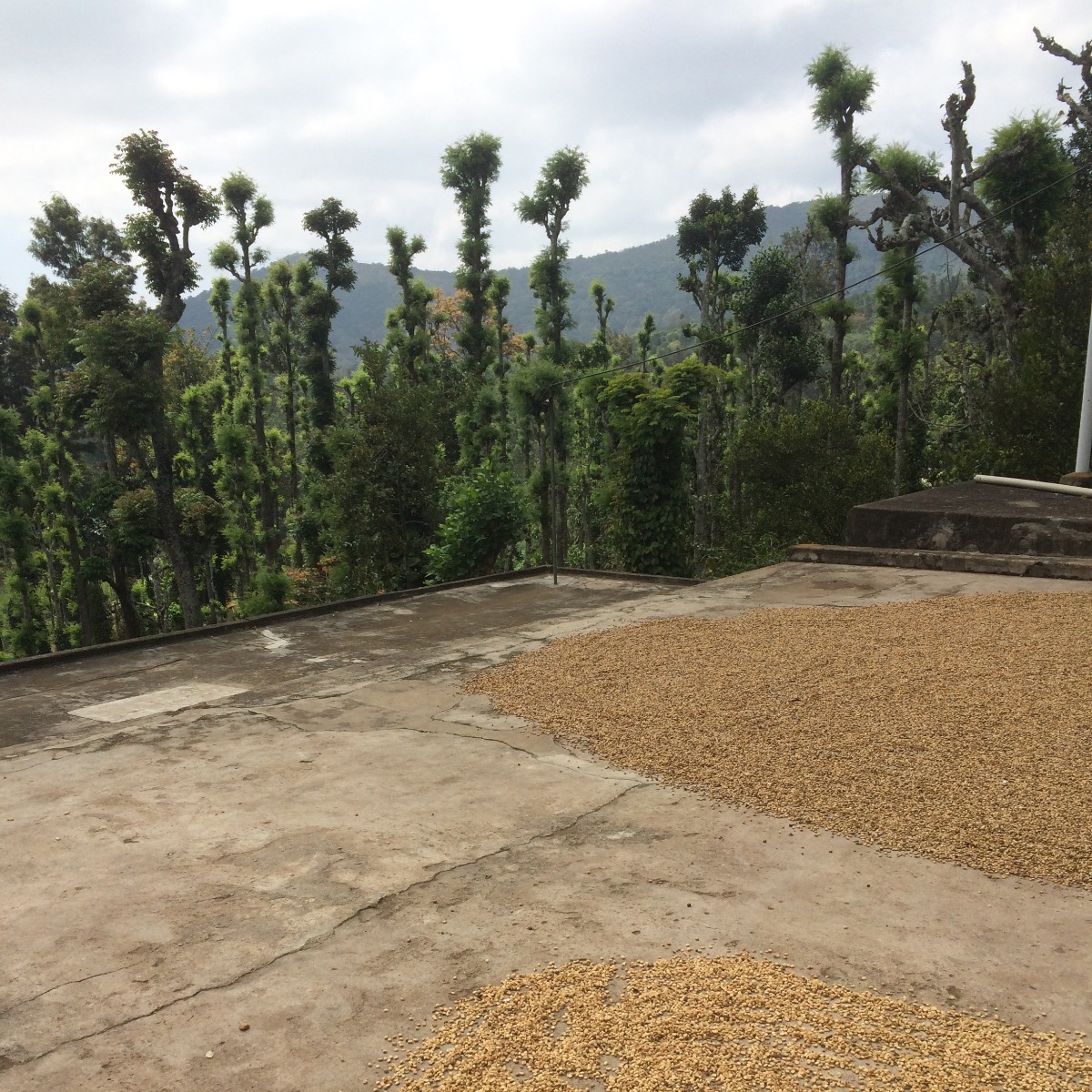 From a distance the hills looks full of impenetrable thick jungle but many areas are pretty intensively cultivated with  a monoculture of either tea plantations, coffee, cardamon or pepper which all depend on the exact nature of the soil, aspect and gradient. The plantations are tightly packed in side by side and they stretch for miles around the hills with the best growing areas jealously guarded and handed down through families over the generations. 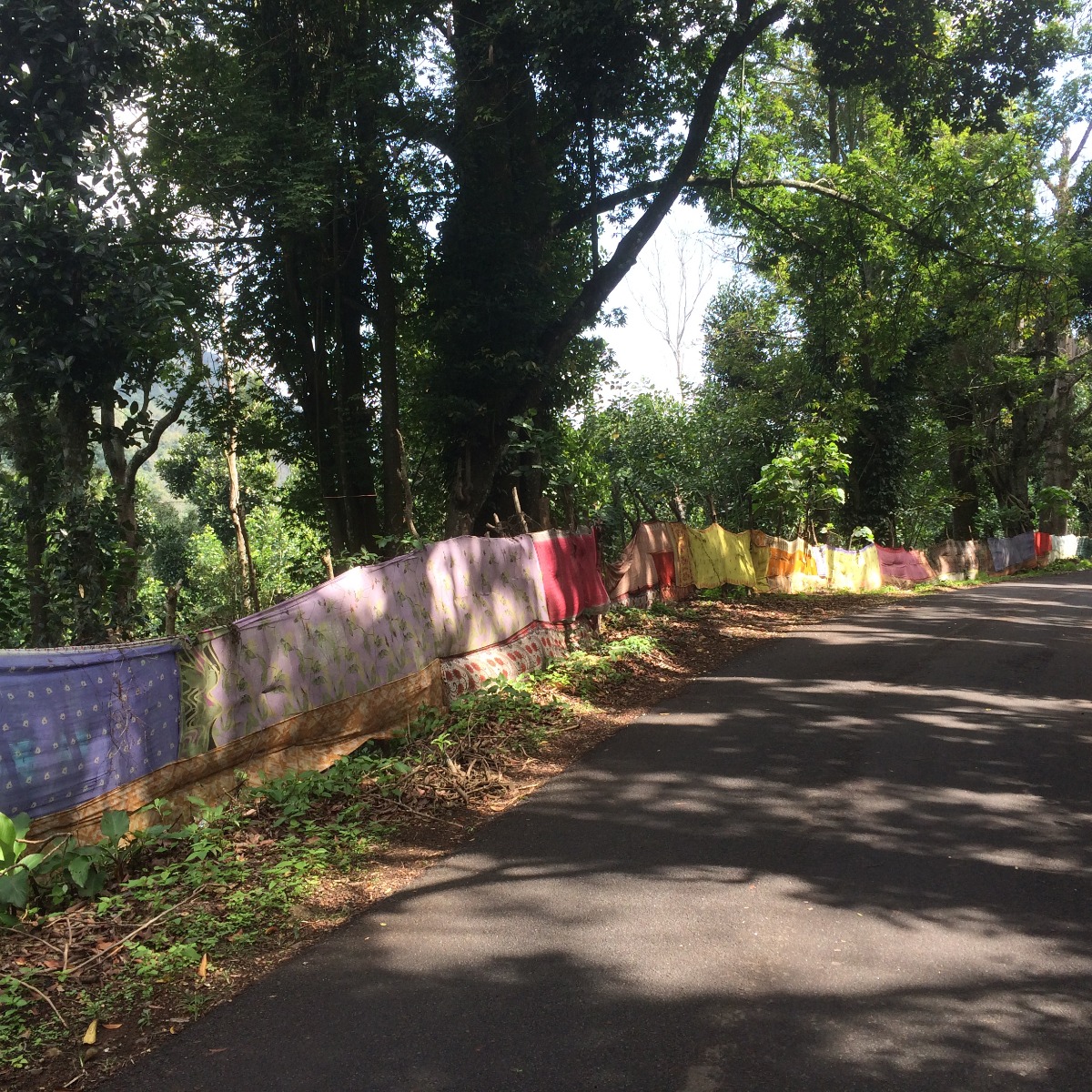 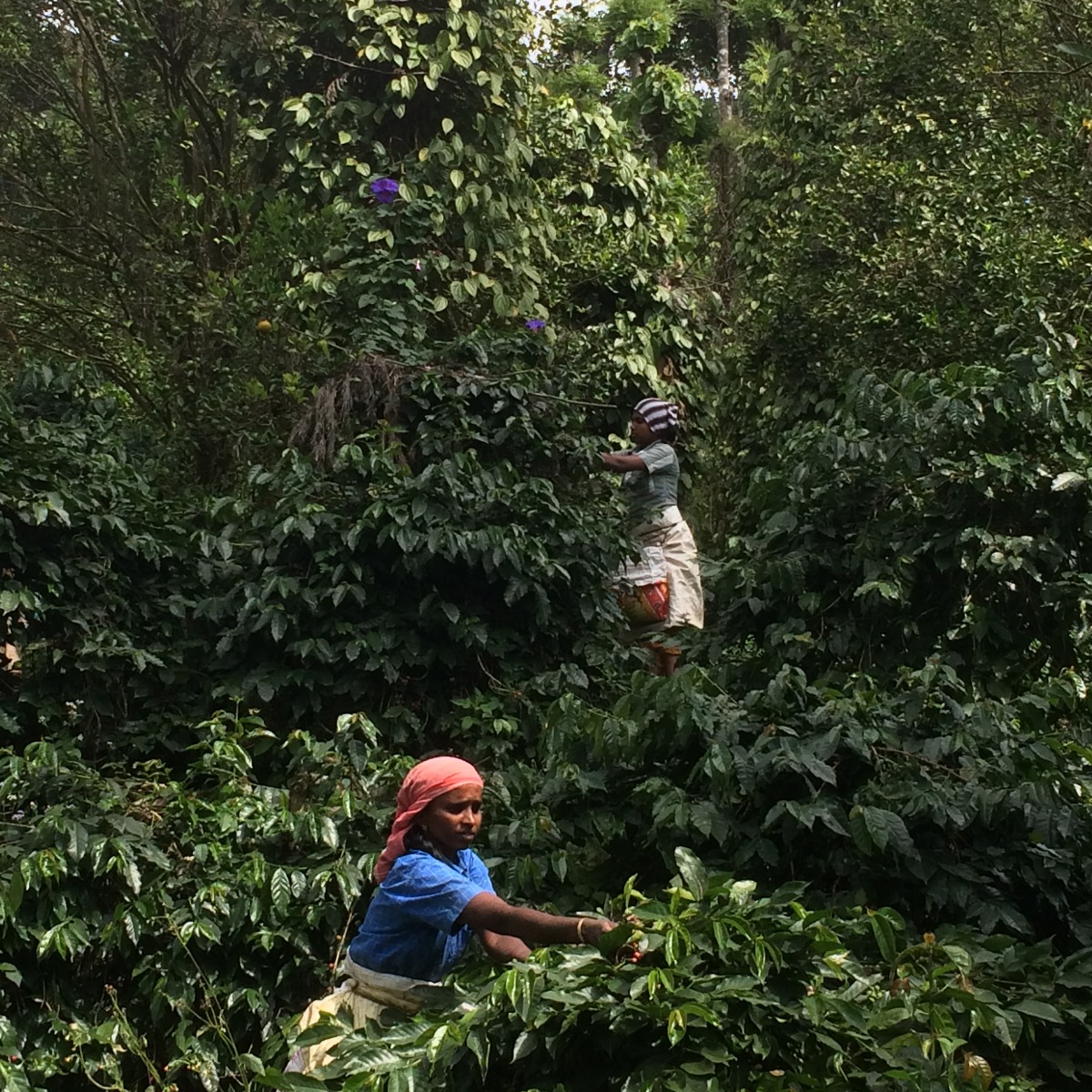 Colourful fabrics strung around the boundaries of a pepper plantation - I was told they were really effective at warding off wild boars!

Peppercorns are the berries of a vine that grows wild in Southern India (although India is no longer the biggest producer, it is the original home of pepper) and is the worlds most traded spice. There are stories of peppercorns being found in the tombs of Egyptian Pharaohs, and of course the history of peppercorn rent being charged in Britain and the Roman centurions being paid in pepper as it was more valuable than gold at one point.

These mysterious dried berries that first drew Europeans to India grow in long threads (a bit like a mini bunch of grapes), and the the vine itself grows up any supporting tree or post - in India they use Australian silver oak trees as supports because they grow very straight and thin. 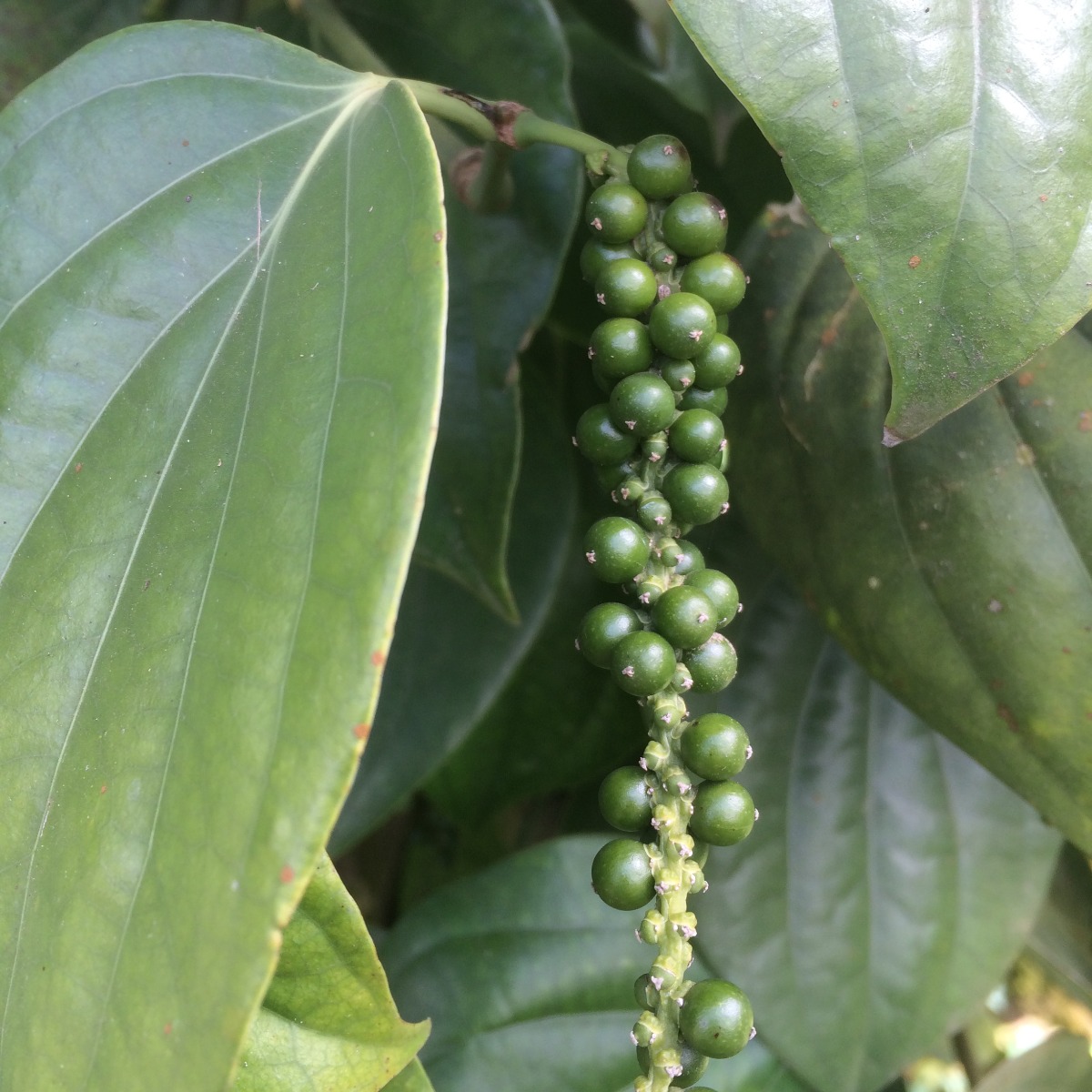 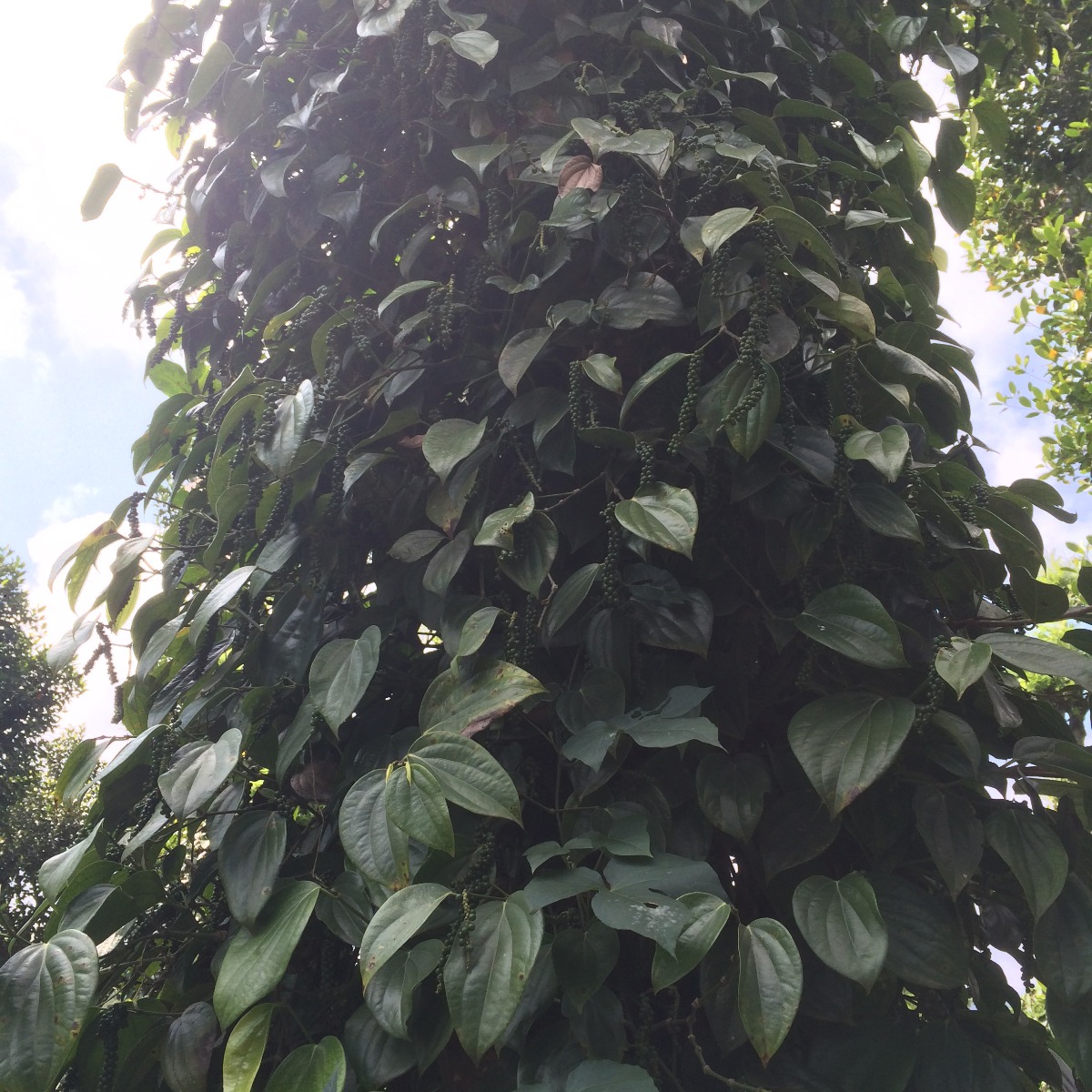 Pepper can be picked green (slightly underipe) or red (fully ripe), and only turns black when dried in the sun. White, red and green pepper are all the same original berry - green pepper can be used fresh but doesn't last very long, so is dried by either brining the fresh green berries or freeze-drying them. White pepper is made by soaking the ripe red berries for several days until the skins can be rubbed off, leaving the whole white seed inside that can then be dried. Red pepper is much rarer as the berries have to be left on the vine for longer (which is financially unattractive for the growers), and is picked as a larger riper berry that dries to a dark brown colour with a red hue. It's worth getting if you have the chance (we stocked some from Vietnam recently) but it's expensive and difficult to find. 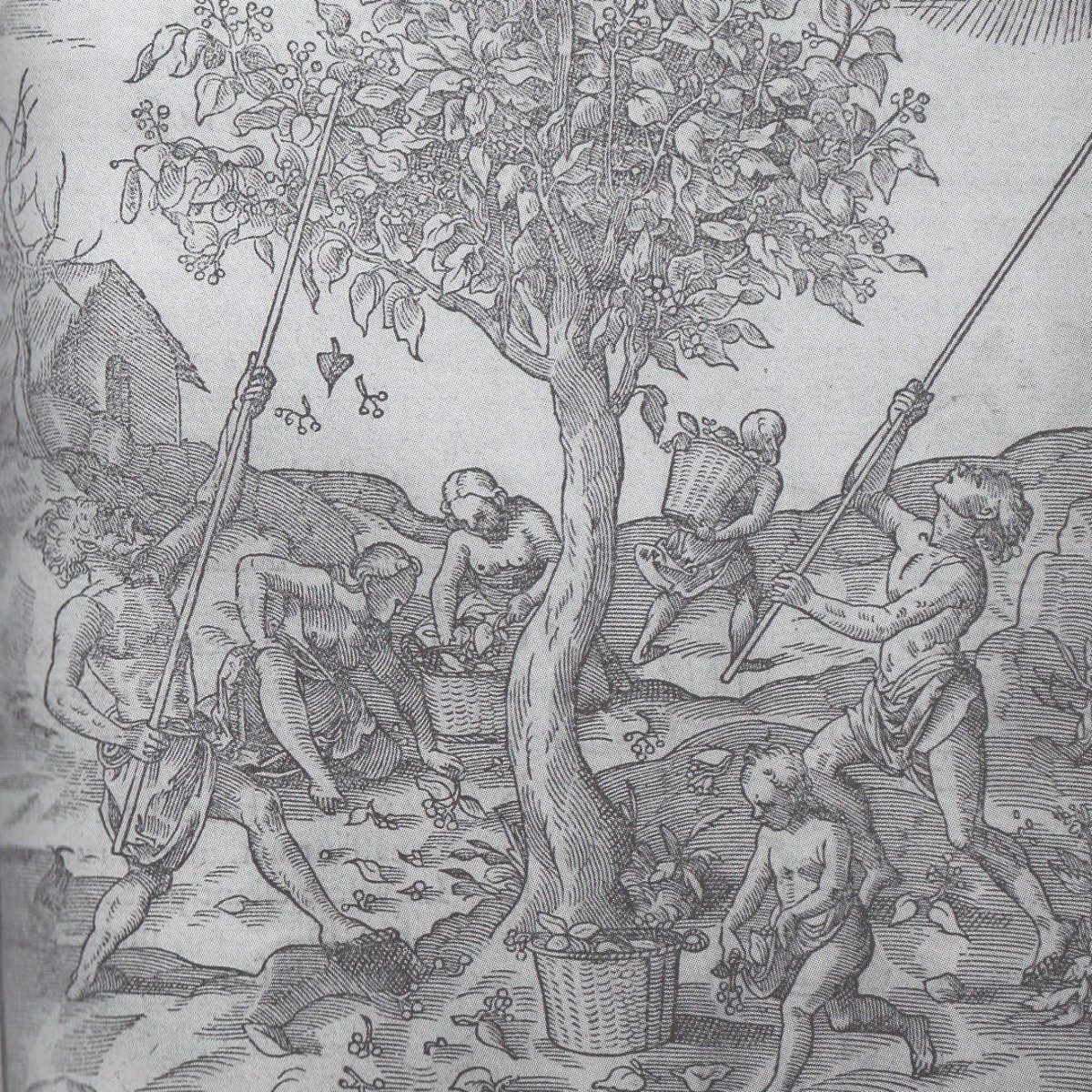 The Indian Pepper harvest as imagined by a French painter (who’d clearly never seen it in real life!) in the 16th Century; a European King being given pepper in a painting from the 15th Century

The desire for pepper from Europe has been an incredible driver for exploration and trade over the centuries. It  seems bizarre now that something so small and perceived as such a mundane commodity in our modern kitchens was so significant, but the desire for the heat and fragrance of these little berries led to the discovery of America (Columbus was searching for a new shortcut western route to the spiceries), was responsible for wars, the building of empires and the creation of incredible cities such as Venice and Genoa, and turbocharged the European influence on global trade and culture by opening up the world to the exchange of people and ideas - quite a legacy for a little green berry! 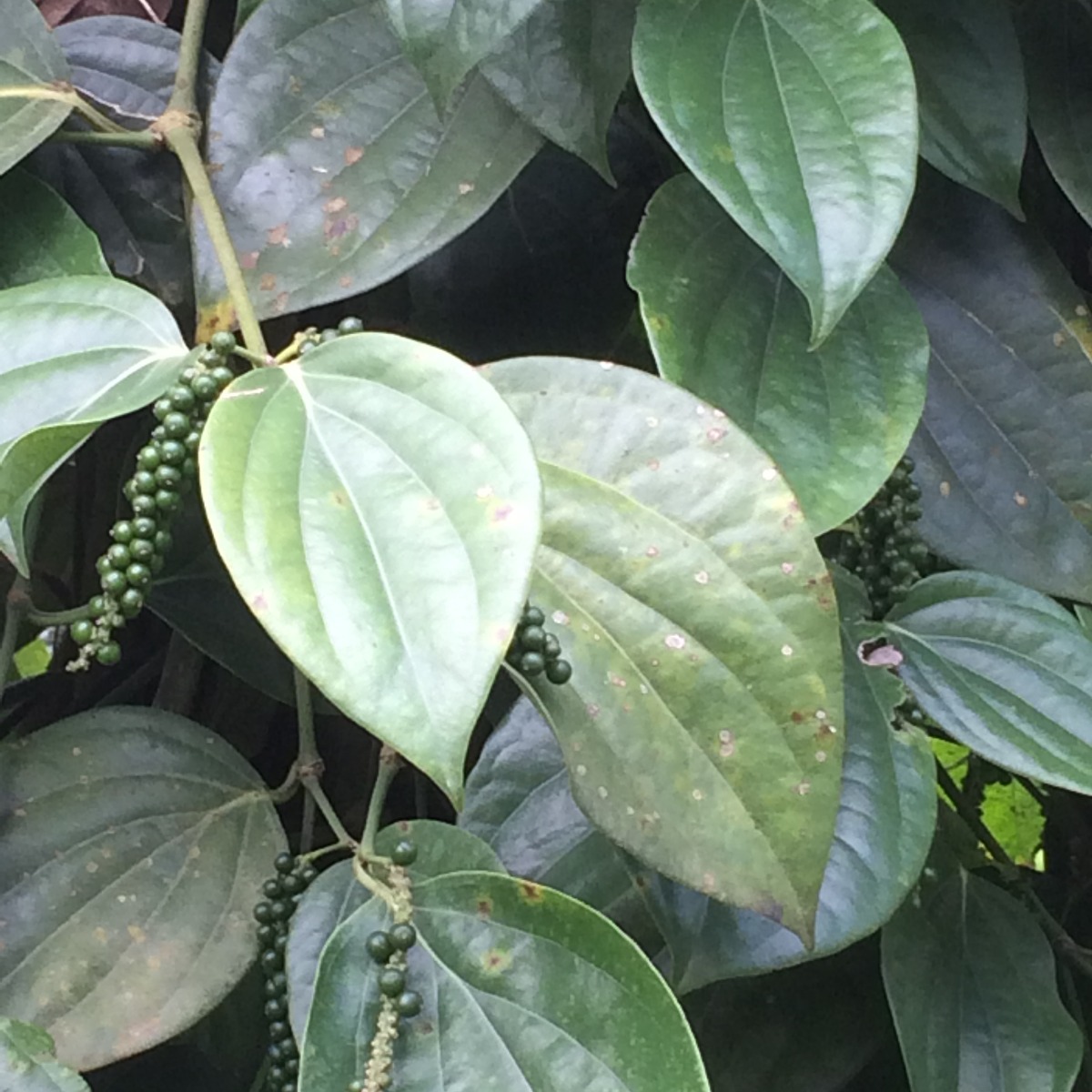 Most villagers in the region grow a few kg of their own pepper at home and will keep the dried peppercorns as a source of income to be cashed in whenever the market is high. So many do this and their vines are so productive that their actions can really swing the market as such a huge amount of pepper can be held in stock. It's a bit of a boom and bust market as pepper can now be grown in so many sub-tropical regions such as Brazil and Vietnam that the Indian growers have lost the dominance they enjoyed in previous generations. 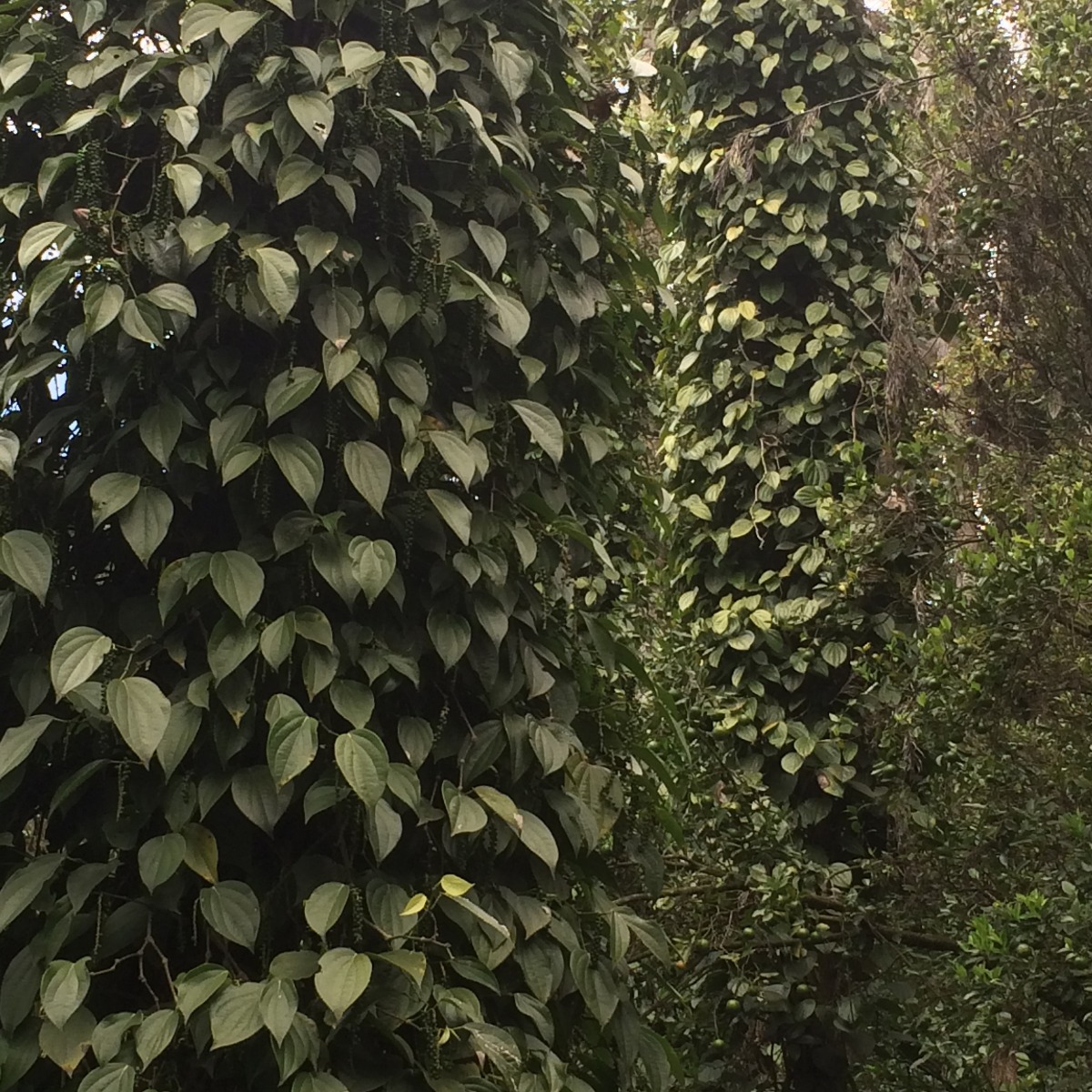 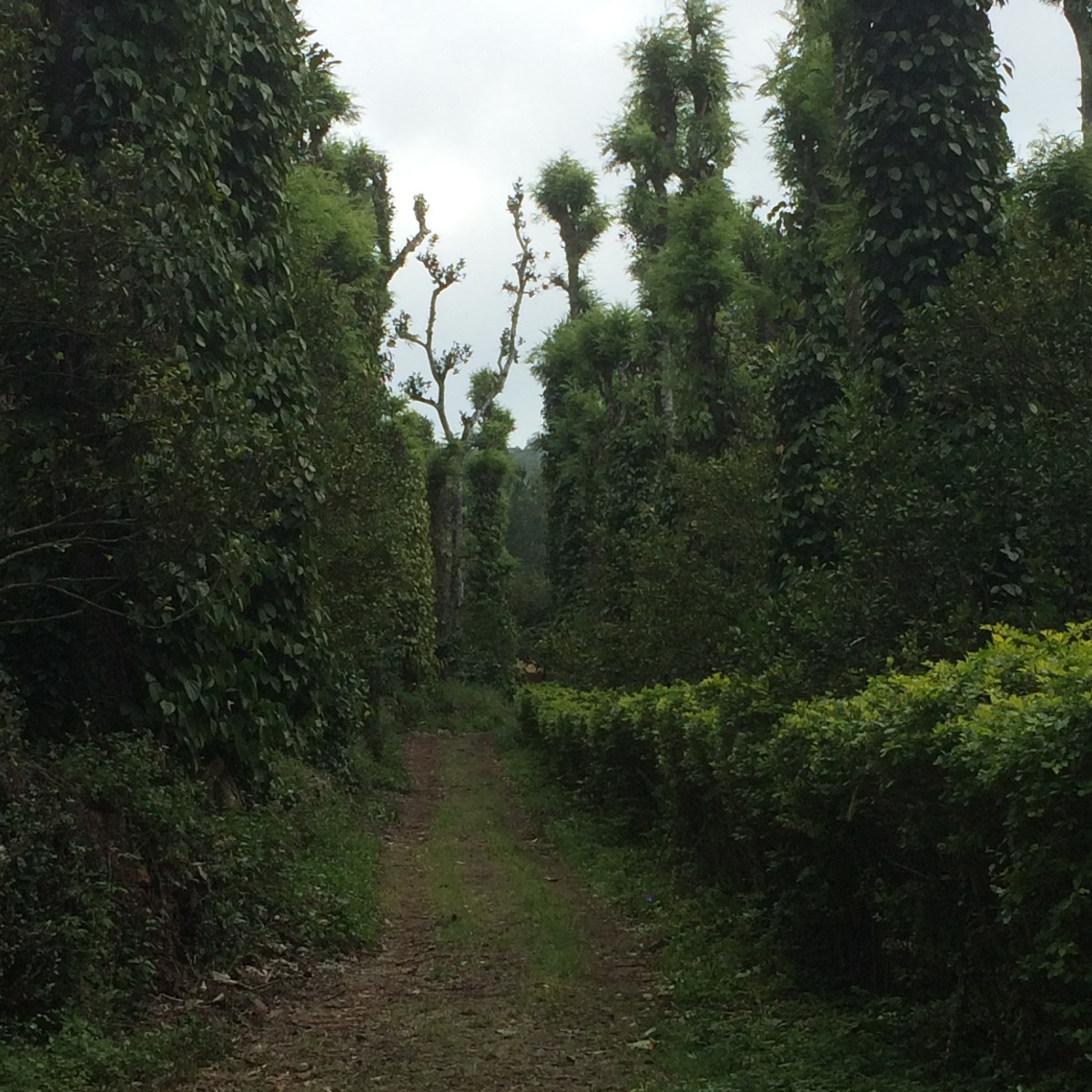 While the best family owned plantations in the Western Ghats can still command premium prices for their pepper which is considered the highest quality , for many pepper farmers in India times are much tougher and competition is increasing as low-cost countries produce higher yields and their previously dominant position is eroded.

For Europeans, the pepper gardens of Southern India represented an Earthly paradise - if they weren't literally the Garden of Eden then at least what they produced must have meant they were something pretty close. Even now it's still incredibly exciting to see these pungent green berries growing in the lush hills of Southern India, it has an extraordinary history and we hope that the pepper farmers continue their work for many centuries to come!