Kimchi-nius - The Rise of Korean Street Food In LA

Los Angeles is now home to the largest population of ethnic Koreans outside of Korea. It was only a matter of time before Korean food asserted itself as a major player in the street food scene here. Whilst in LA for a couple of days after travelling around California for 2 weeks, I decided I would experience this new culinary wave that’s taken LA by storm, and see what this new food concept had to offer, and boy was I glad I did – even if I did come home a few pounds heavier. 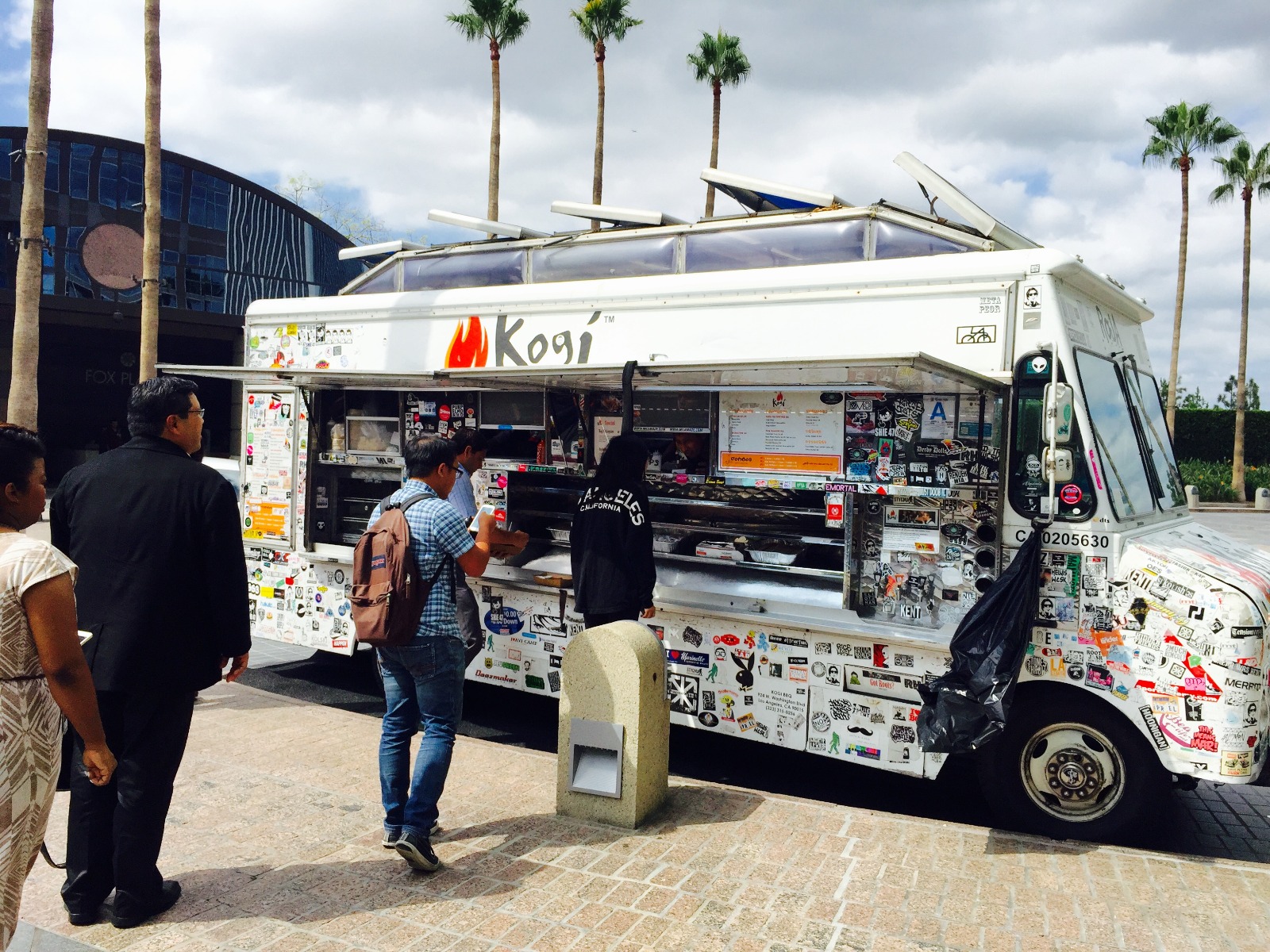 Our first Uber taxi of the day was taking us in the direction of Fox Tower where twitter had informed us that the pioneers of Korean Fusion food,  ‘Kogi BBQ’ had one of their trucks parked. Born from late-night hunger by founders Mark Manguera, Caroline Shin-Manguera and Chef Roy Choi, the Kogi truck is a traveling Los Angeles landmark that serves up Korean Mexican tacos, day and night. By sending out twitter alerts so followers are able to find the trucks at any given time it allows Kogi to hold an air of mystery and be at the forefront of social media hype. We hopped out the taxi and the scent of barbecued meats hit our noses, we turned around and there she was in all her beauty...Kogi BBQ ROJA truck. 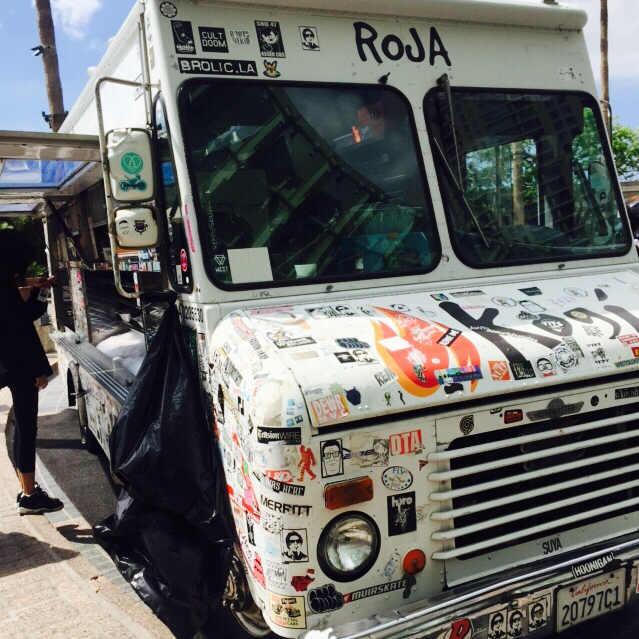 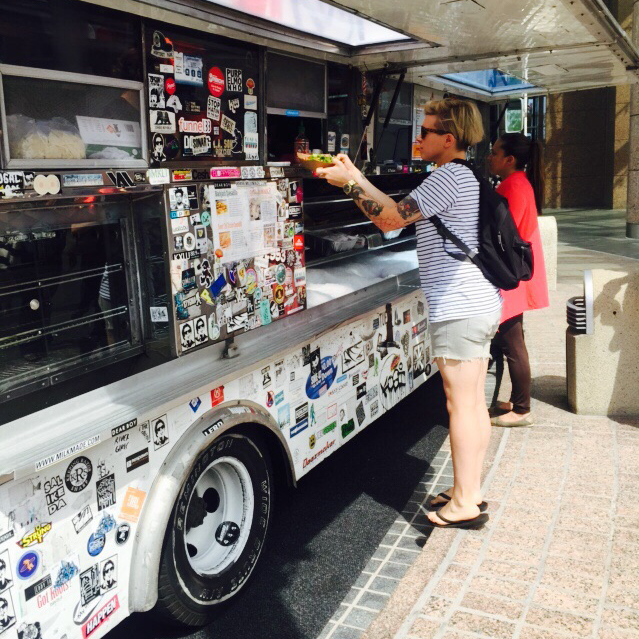 Our first look at a LA food truck, and she didn’t disappoint.  Now we had to decide what to order, seeing as though we were going to be eating a lot of food today we decided to start small, but when confronted with the menu we couldn’t resist. The menu consisted of tacos, burritos, sliders, and even a kimchi quesadilla. We opted for the combo deal (Americans love a combo deal!) of short rib tacos, a Kogi dog and a peanut chocolate sriracha bar. I had already begun to salivate when reciting my order.  A few minutes passed until my name was yelled out via the ‘collection’ window, and the queue of hungry people had almost quadrupled. 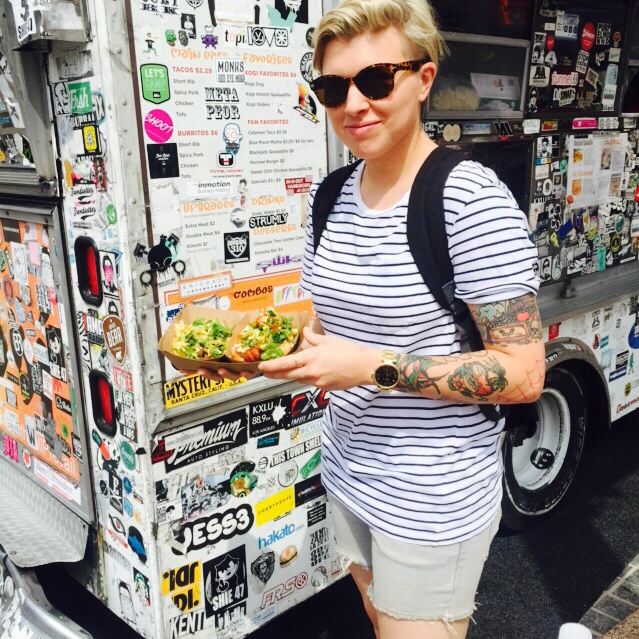 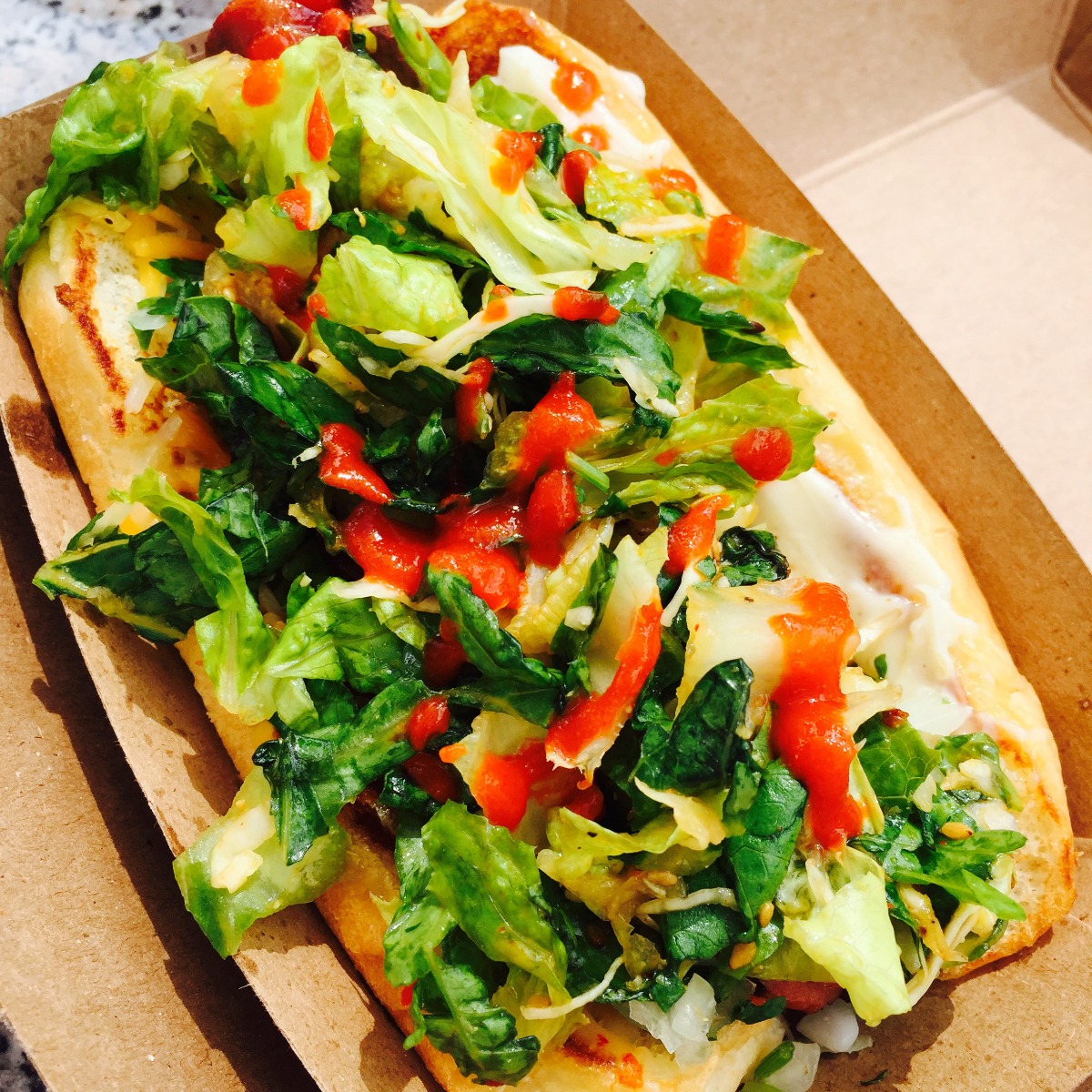 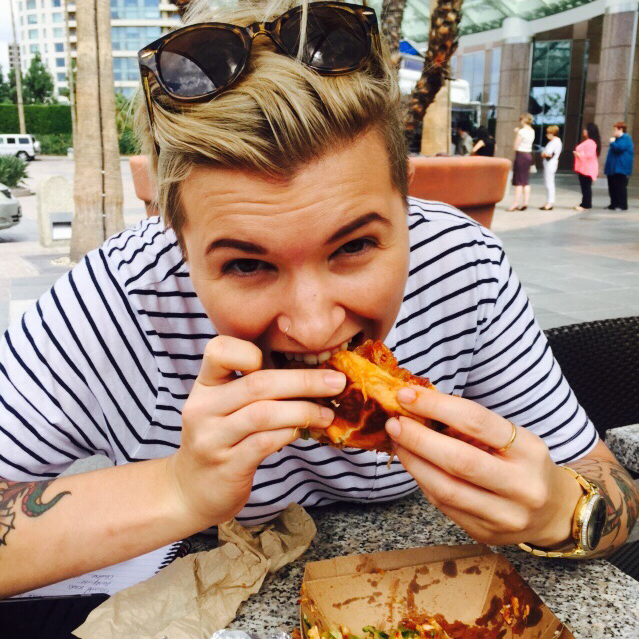 The Kogi dog was a regular beef American sausage in a toasted bun, topped with Kogi slaw, coriander, onion and lime relish, a little bit of cheese, and a touch of sesame mayo. I felt compelled to finish it with a squirt of sriracha sauce (the new condiment of choice is as much beloved as ketchup is over here!) 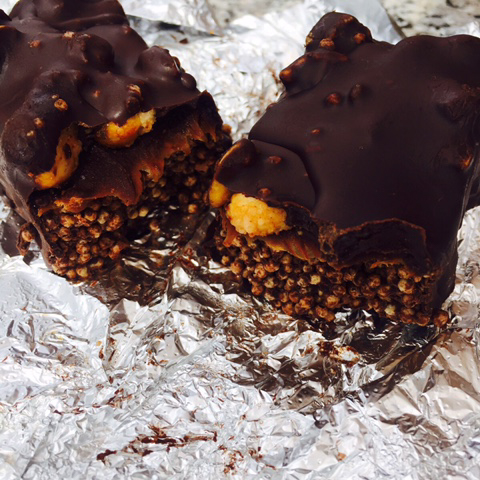 To finish off what was ultimately our breakfast of the day, we had the Sriracha bar. A layer of crisped rice in dark chocolate, smooth sriracha ganache, liquid caramel and candied nuts spiced in cinnamon and cayenne before being coated in dark chocolate again. It was like a sexed up nutty spiced rice crispy cake with the hint of heat from the chocolate sriracha ganache. I resisted eating the whole thing, mainly as we were getting funny looks from the office workers, probably because we were sitting on the tables and chairs reserved for them. It was a great moment the next day when I remembered I still had the half-eaten bar in my backpack!

Kogi BBQ also had this little pot of dessert heaven on their menu, aptly named  ‘Chocolate Tres Leches Cake’ - In essence it’s a Devil's food chocolate cake, filled with a pool of tres leches infused with cinnamon, cayenne and vanilla. The centre of this gooey cake is then filled with a thick blob of tapioca milk pudding, another layer of tres leches  is added and then it is finished with spiced peanut brittle, pieces of toffee, cinnamon toast crunch and cocoa pebbles.  I’m glad I opted for the sriracha bar over this rich heavenly delight, I fear that this blog would have been rather short if I did, I’m not sure I could have eaten another thing! #foodcoma.

Proud as punch at our first truck find of the day we were ready for more. Another trailblazer in this new approach to Korean food is ‘Seoul Sausage’. Originally starting out as a catering business by 3 Korean American guys who love sausages and Korean BBQ, they wanted to introduce people to Korean food in a way that was easy for people to understand. I mean who even knows that they are tasting kimchi when you hide it in a deep fried rice ball? With their new concept of Korean/American food and their unique Korean style sausages they went on to win Food Networks ‘The Great Food Truck Race’ in 2012. Winning a food truck and $50,000 they had put their sausage and Korean fusion food on the map. 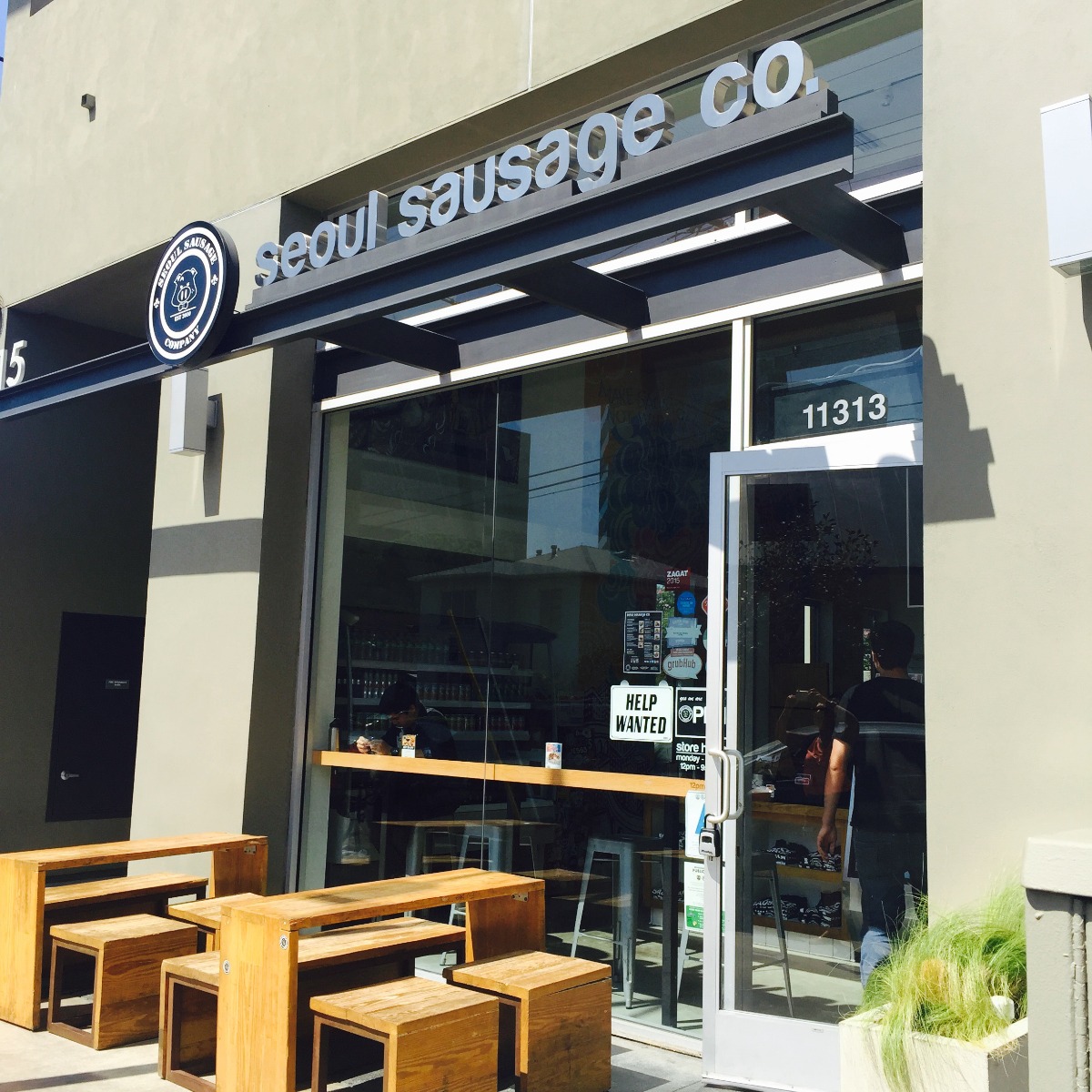 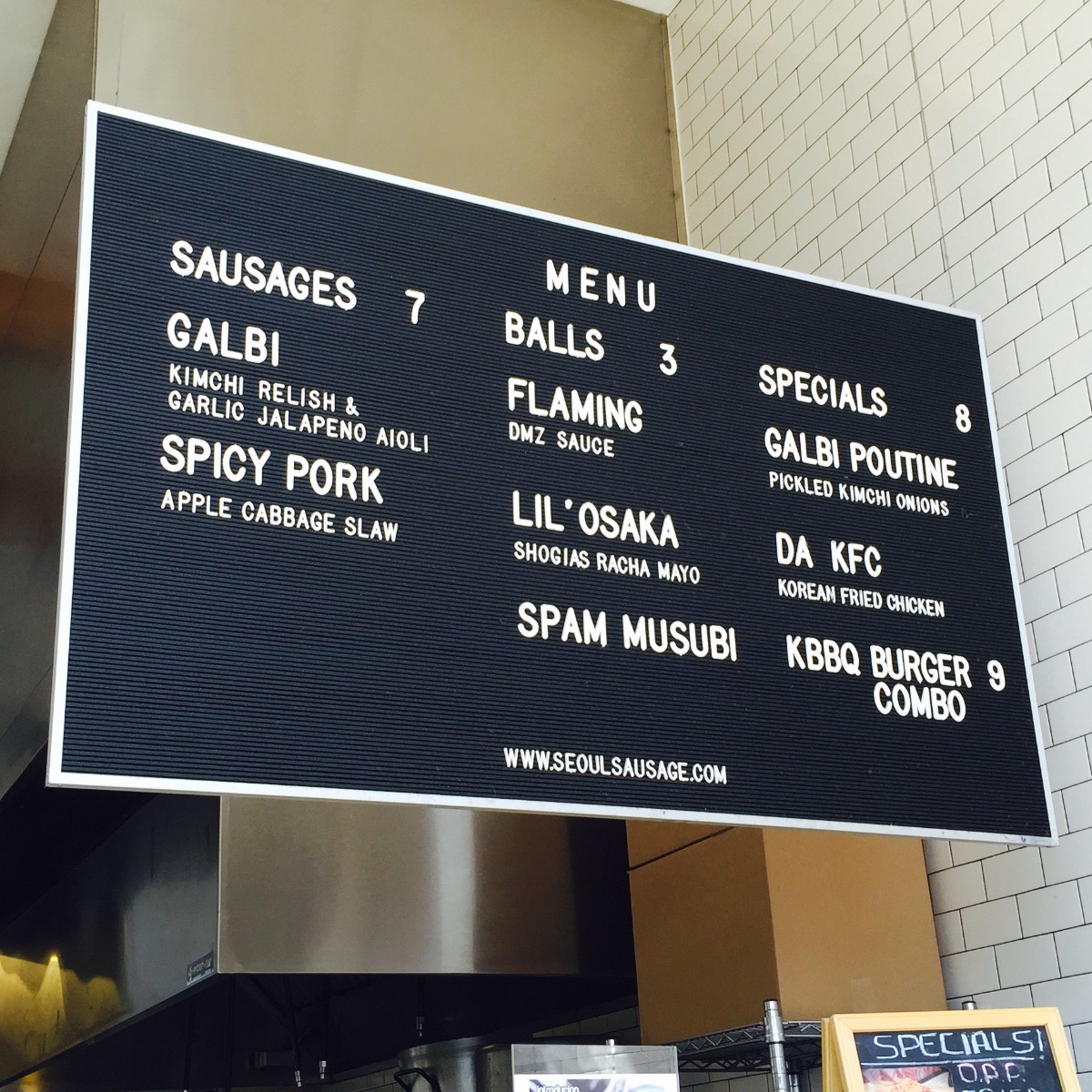 I checked the twitter feed for the location of their food truck, but alas it was all the way on the other side of the city, Google maps calculated over an hour (LA’s traffic is just plain ridiculous).  Luck was on our side as I found out they had a bricks & mortar venture in Little Osaka (a trendy hot spot for the newer Japanese American communities) which wasn’t too far from us.  To Little Osaka we must go…. 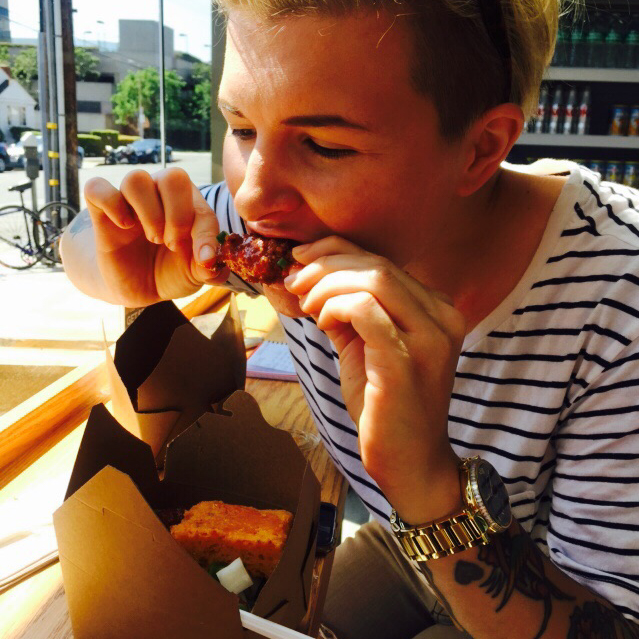 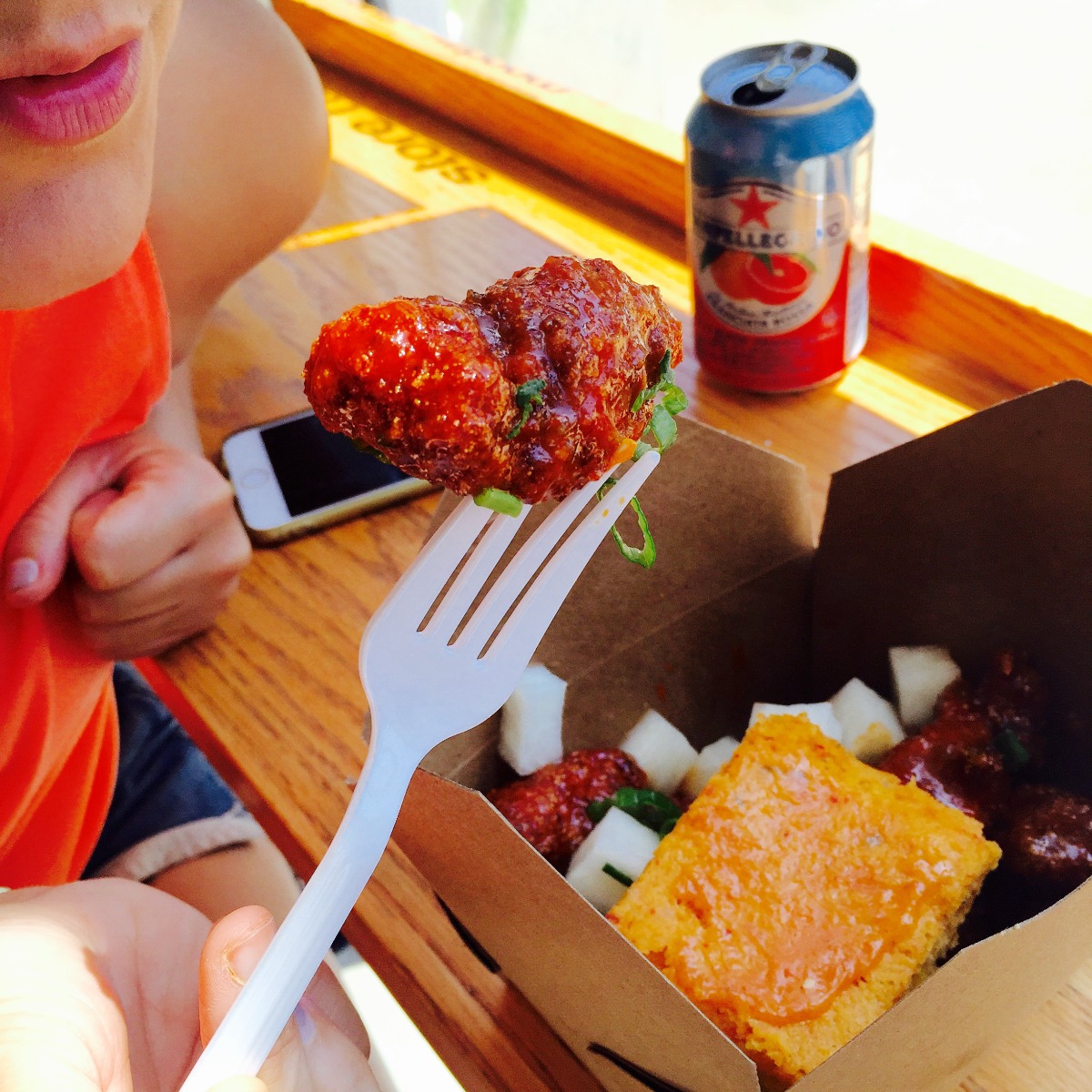 The American Korean girl behind the counter told us her favourites from the menu “You just have to try Da KFC, it’s the best!”.. So of course we did, and gosh am I glad that we did. The chicken pieces were a mixture of dark and white meat (no bones here) coated in a mixture of cornmeal and panko breadcrumbs to give it the crispiest of textures. Its double fried till perfectly golden and then tossed in a gochujang (a fermented savoury, spicy Korean condiment made from red chilli, glutinous rice, fermented soybeans, and salt) & honey glaze. Served alongside were pickled daikon radishes, a refreshing counterbalance to the spicy kick of the chicken, and Kimchi cheddar cornbread. A hybrid of Korean influence and American comfort food, familiar but simultaneously different! Seoul sausages’ take on Korean fried chicken is possibly the best fried chicken I have ever had! 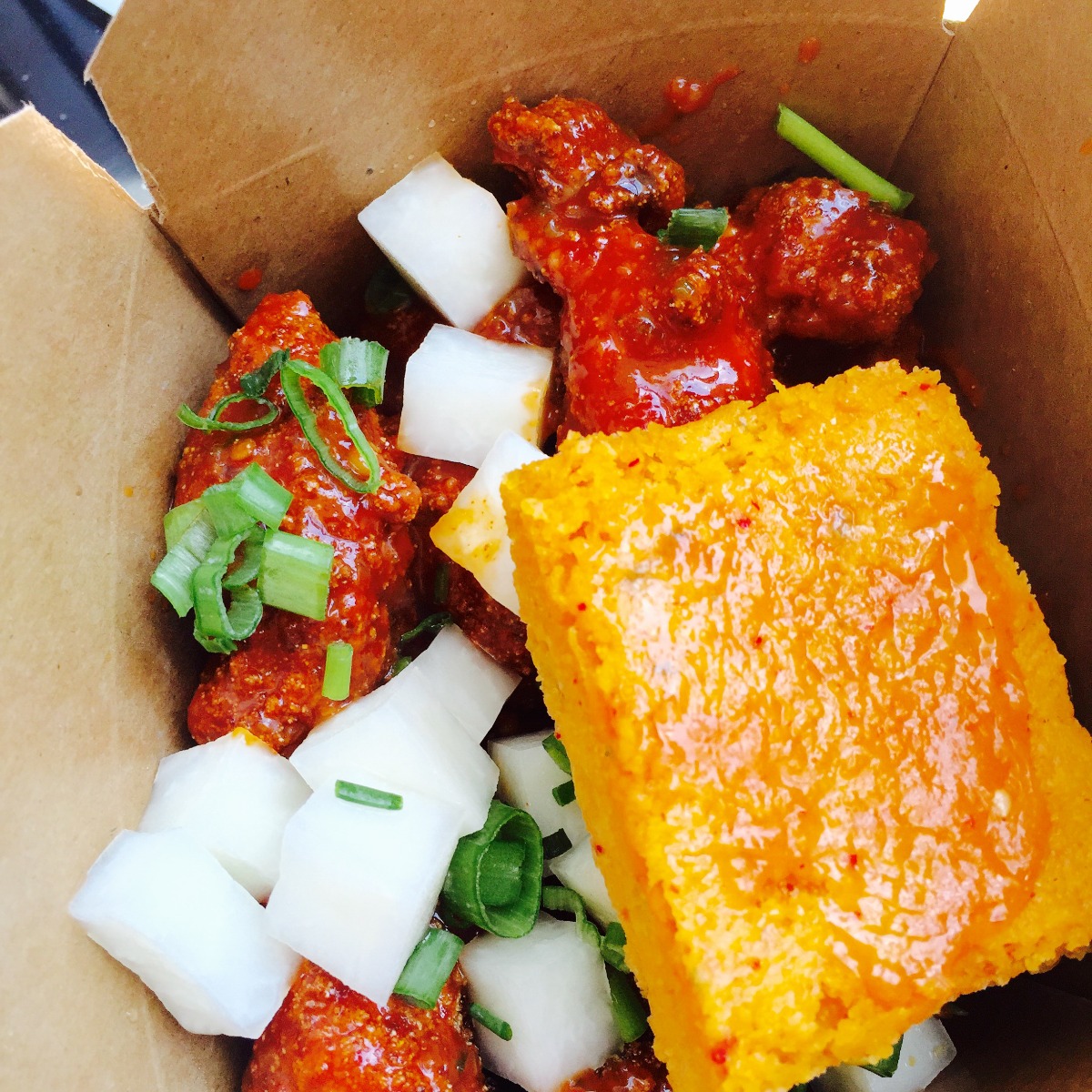 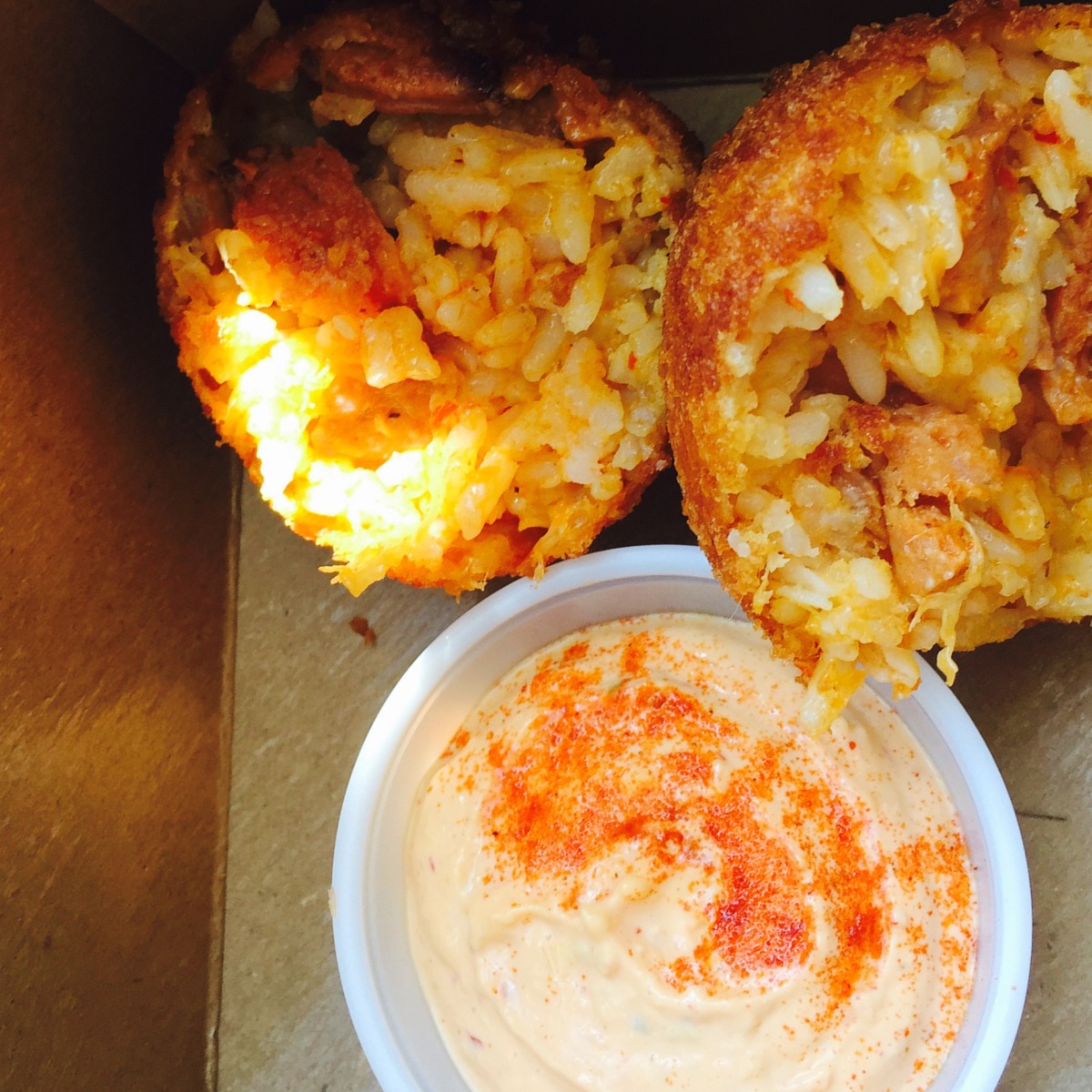 Instead of yet another hot dog we opted for the ‘Flaming Ball’- Think of a spiced up Italian arancini risotto ball, but instead of risotto this was made with kimchi fried rice with the addition of spicy Korean BBQ pork and cheese, rolled into a ball, dipped in breadcrumbs and deep fried, served with DMZ (a homemade garlic, jalapeno, kimchi, sriracha aioli.) The creamy spiciness of the DMZ worked well with the cheesy fermented rice balls. I could have easily eaten another couple of these. Luckily it was a little too spicy for the other half, all the more for me!

2014 was the year for frozen yoghurt, this year is the year for snow cream. An American adaptation of Taiwanese & Korean shaved ice cream.  We had been tipped off about ‘Blockheads Shavery’ and being next door to Seoul Sausage, we just had to give it a whirl. Making each snow cream block in small batches onsite, they shave each block only when it reaches the optimal temperature, to make sure the snow cream is at its best. 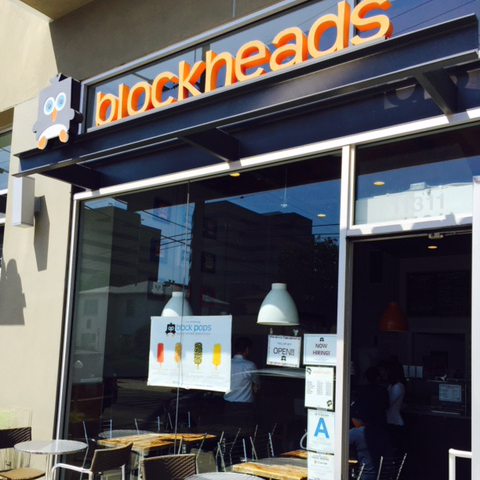 The idea is pretty simple, choose your flavour of snow cream, add as many toppings that tickle your fancy and finish with your choice of drizzle – a sort of pimp your ice-cream. With a menu full of interesting flavours and toppings we didn’t have a clue where to start, typical brits abroad. After many an indecisive minute we opted for the combo of Black Sesame Seed flavoured snow cream, topping it with crushed oreo cookies, rice cakes (nothing like the cracker-y cardboard type you eat when you’re on a diet) and a coconut condensed milk drizzle.

A few minutes later we were presented with a HUGE bowl of grey fluffy ice ribbons, our first thought being ‘how are we ever going to finish this?!’ How could these thin ribbons of ice cream be light, rich and creamy all at the same time? It was a texture like nothing else I’ve had before. 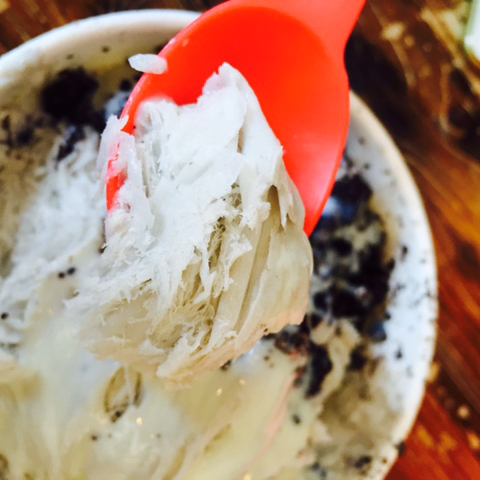 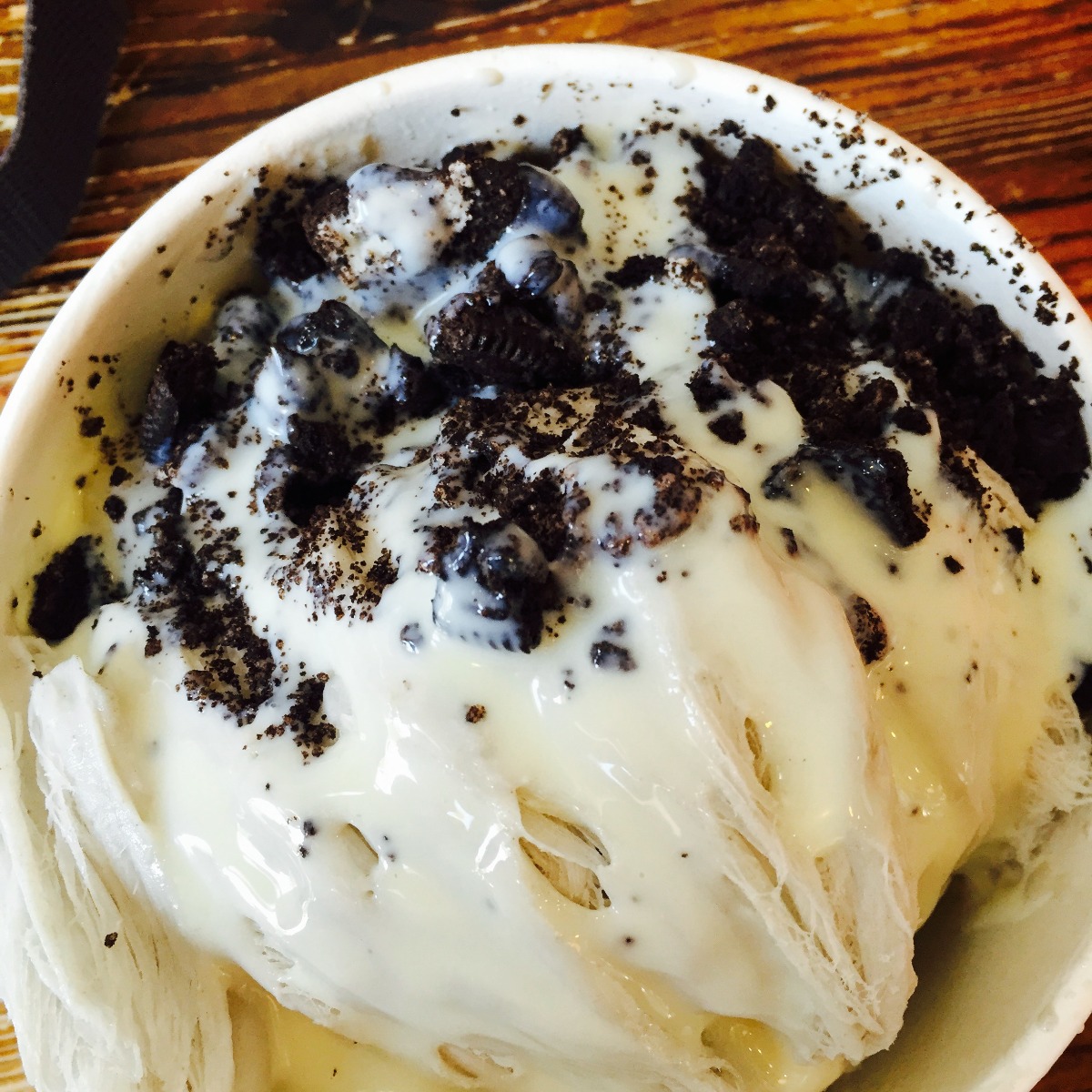 The black sesame ice cream had a nutty flavour and the coconut puree helped to sweeten it up.  At first appearance we thought the lady put lychees in accidentally, but these were in fact the rice cakes.  These little balls were smooth, chewy and glutinous, with a taste not too dissimilar to rice (of all things!). I later researched these and found out they are Korean Tteok,  a type of rice cake made with glutinous rice that is soaked in water for a while and then ground down. This rice flour is then mixed with water and steamed. 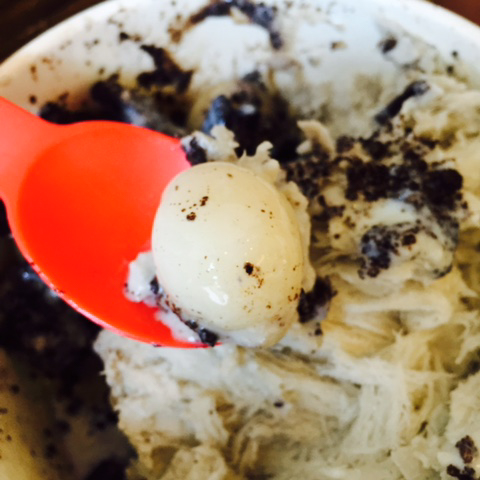 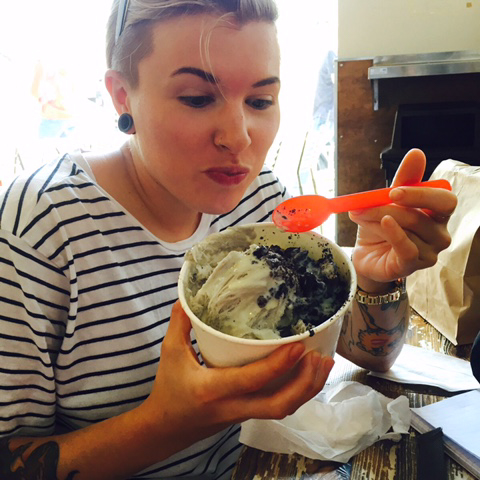 Within minutes we had done the unimaginable and somehow finish the pot. Stuffed to the brim there was only one thing for it… more food! We had found out by the powers of social media that a great location for a whole host of food trucks was outside the Los Angeles contemporary art museum between 12-2pm. We were in luck it was only 1pm! We ordered our Uber and headed back east. We were pleased for the 30 minute taxi ride (did I mention the LA traffic!) this allowed us some time for our filled tummies to digest all the food we had inhaled over the past couple of hours. 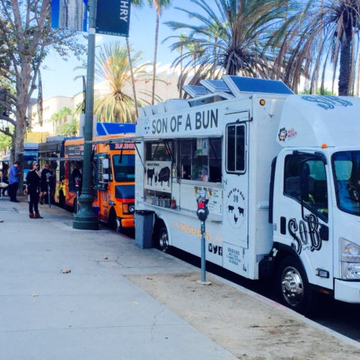 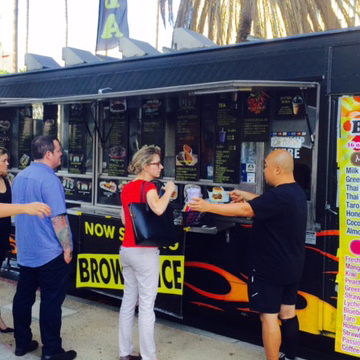 We pulled up and instantly saw a line of trucks parked up, each with a different food theme; ‘Bahn in the USA’ -  a Vietnamese sandwich truck, ‘Son of a Bun’ –  a burger truck, ‘Flew Da Coop’ – all things Chicken truck, and the one with the largest queue, ‘Rice Balls of Fire’. A food truck merging Japanese, Korean and Hawaiian food, this was surely going to be interesting! 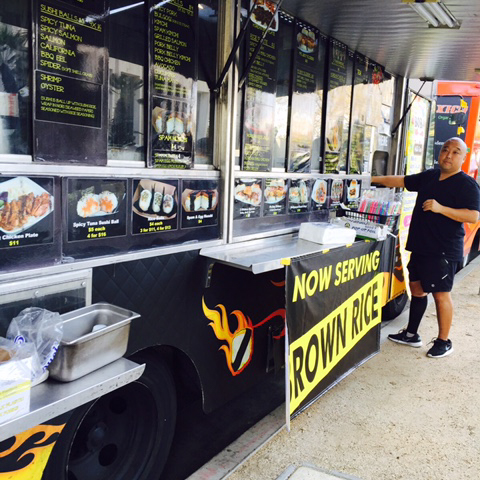 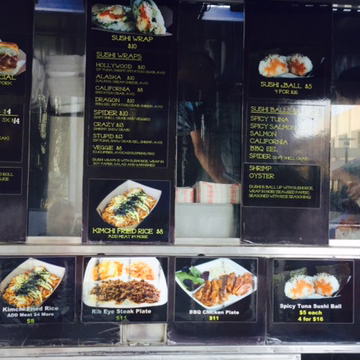 Run by Korean Chef James Park, a trained sushi chef who has worked across the globe. Like so many chefs here in LA the opportunity to open one’s own food truck with all the knowledge gained from many years of travel was too much to resist.  With a menu ranging from Japanese sushi, Korean kimchi fried rice and even Spam rice balls I was sold. I opted to try the Korean BBQ Chicken Burrito, a tortilla filled with kimchi fried chilli rice and packed full of the most delicious barbecued chicken, a sprinkling of cheese some green leaves and a special sauce. The kimchi fried rice really hit the spot that fermented savoury taste along with the chilli ‘special sauce’  was that level of hot where you know your mouth is numb but you just can’t stop! 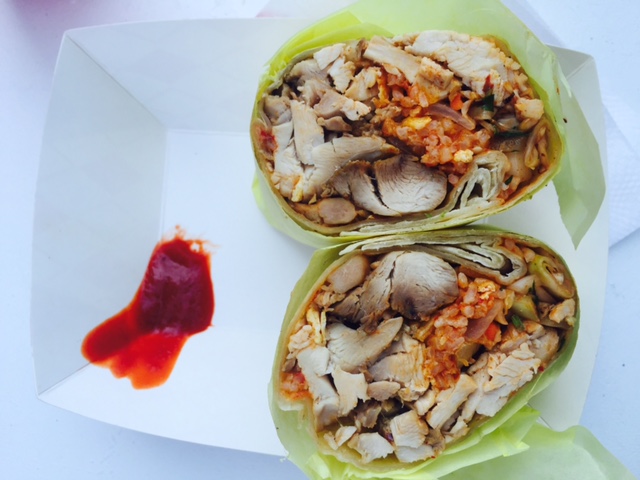 With the ability to move from place to place, food trucks have profited from the ever growing use of social media. Creating a buzz by sending out tweets of the truck location only minutes before it arrives.  It’s like being part of a cool secret club, it already conjures up an excitement before you’ve even tasted any food! It seems that the immigration of Asian people to American shores has meant that Americans are accustomed to new flavours more than they ever have been before. By sharing the best flavours and elements of Korean cuisine together with more familiar ingredients and calling it something more recognisable it makes it far less daunting for people to try something new. Who knows in 5 years time K-Mex may in fact be bigger than Tex-Mex! Now back home in Bristol I eagerly await the arrival of a Korean fusion food truck, I fear I could be waiting a while, but at least I know I’ll be its first follower on twitter!