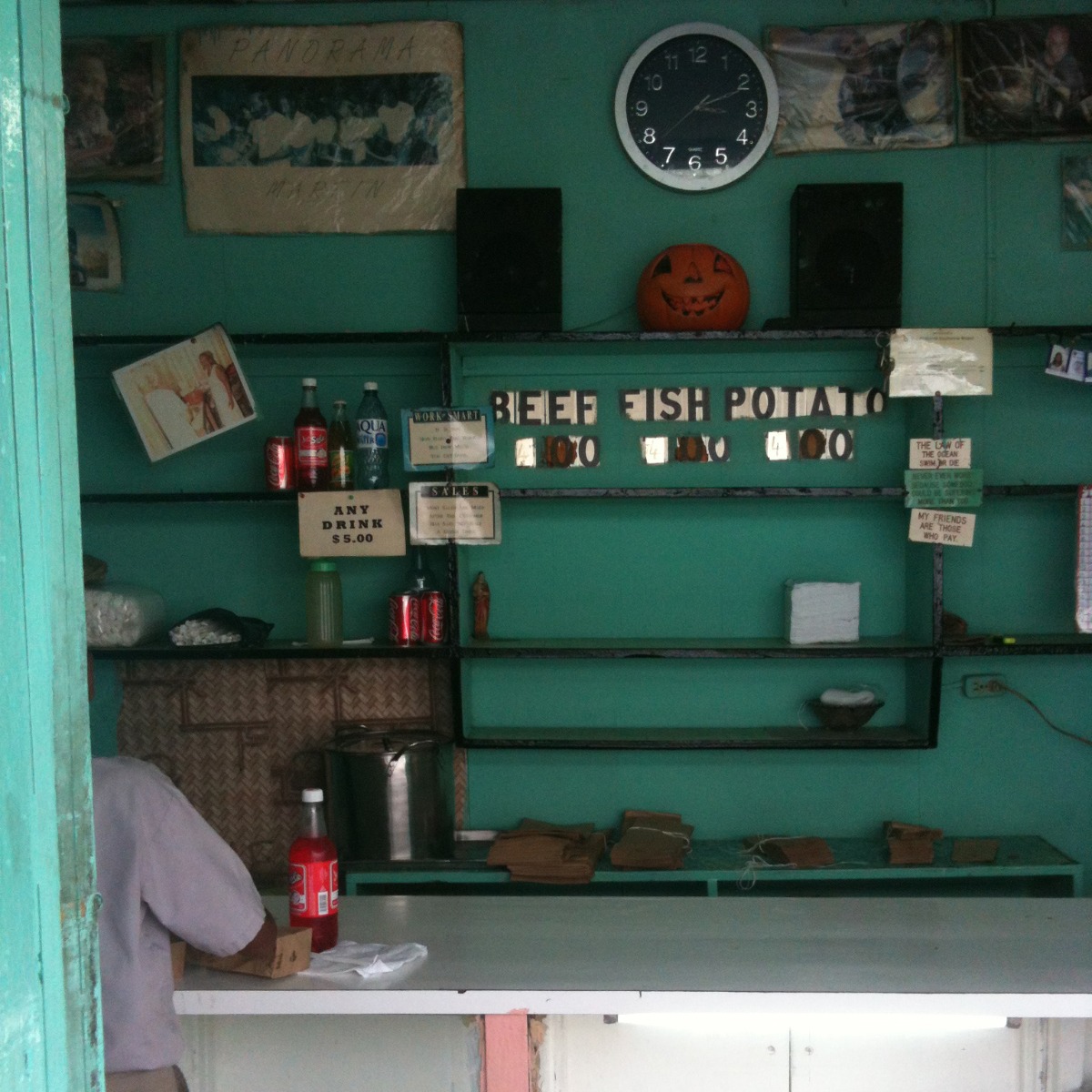 Trinidad's capital, Port of Spain, isn't going to win any awards for civic beauty but it's full of colour, energy and it's really interesting from our point of view because there's some fantastic food here.

Caribbean cooking tends to use lots of European vegetables and herbs mixed with Caribbean fruits and hot peppers, together with West African cooking styles which reflects the population mix in many of the islands. The interesting thing in Trinidad is that the population and consequently the food is even more diverse - there are Syrians and Lebanese people, a big Chinese population, people from Latin America (Trinidad is just off the coast of Venezuela) but it's the fact that something like 40% of the population is originally Indian that's led to something really special. 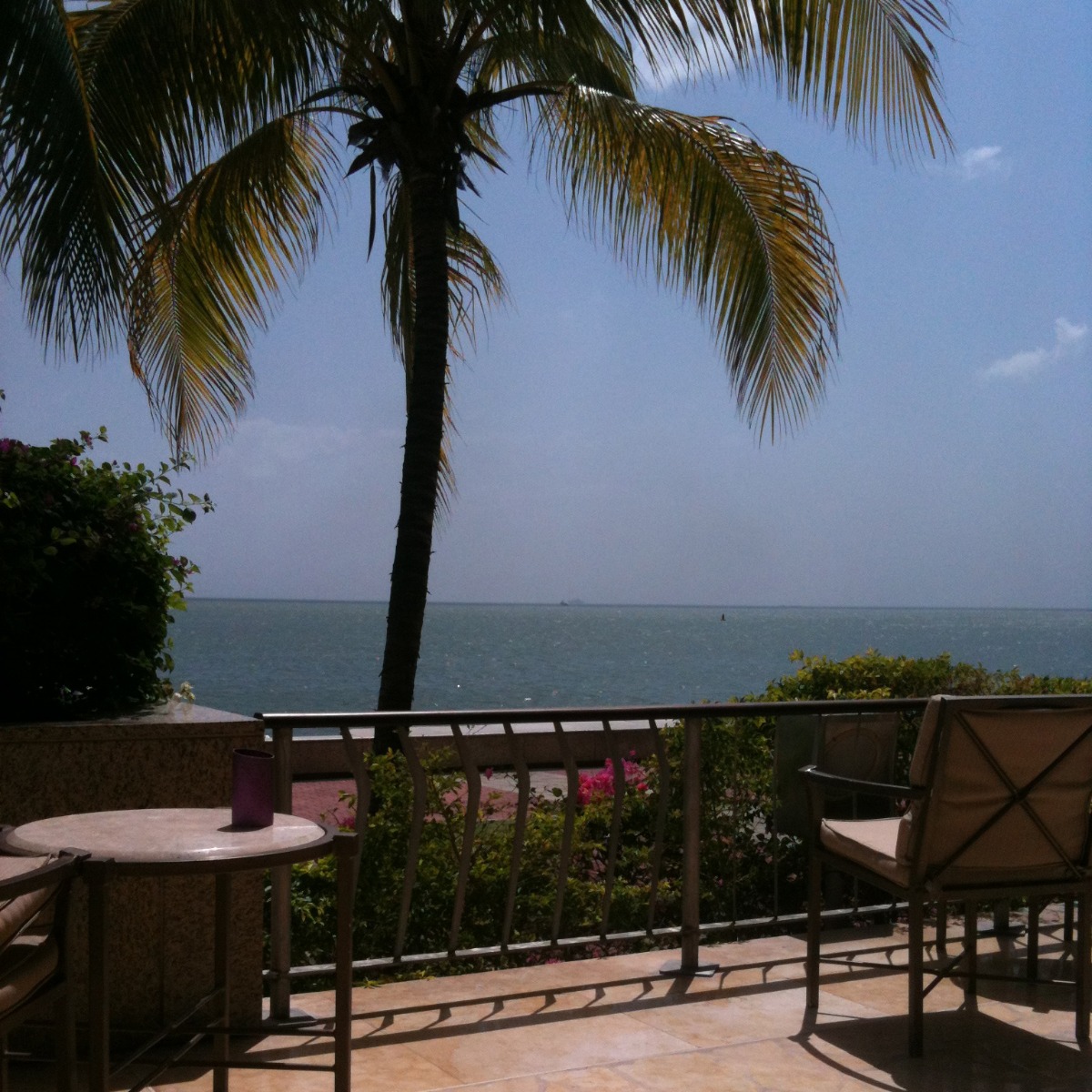 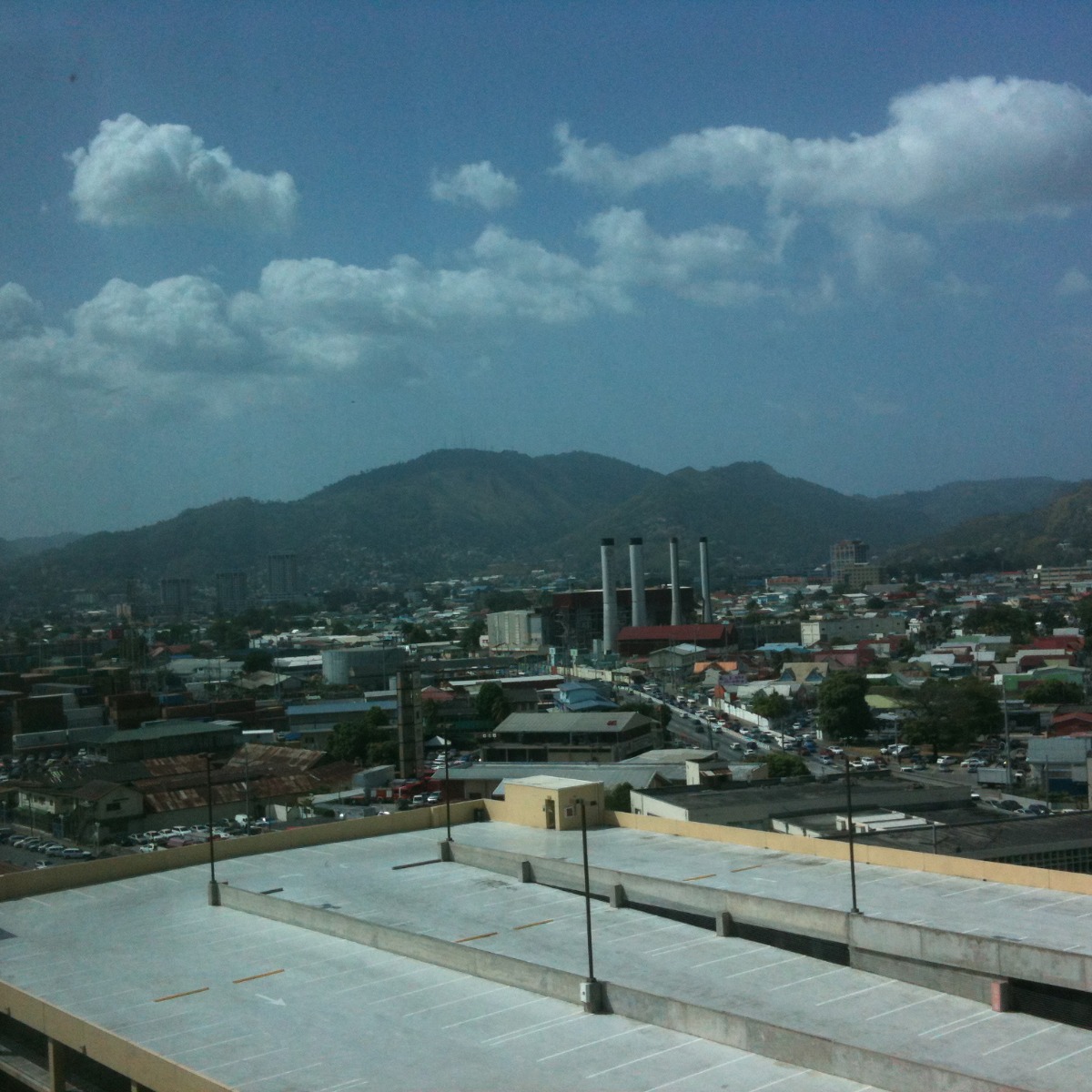 One view of ... aaand from the other side (yes, that really is a power station in the middle of the city)

The national dish is probably Doubles which are 2 fried breads covered in curried chickpeas with lots of different sauces and relishes on top. It's related to the curried chana masala dishes and fried puri breads of India but with all kinds of local seasonings and they make a fantastic breakfast (it's a particularly good cure for a hangover - filling, spicy and very moreish!) 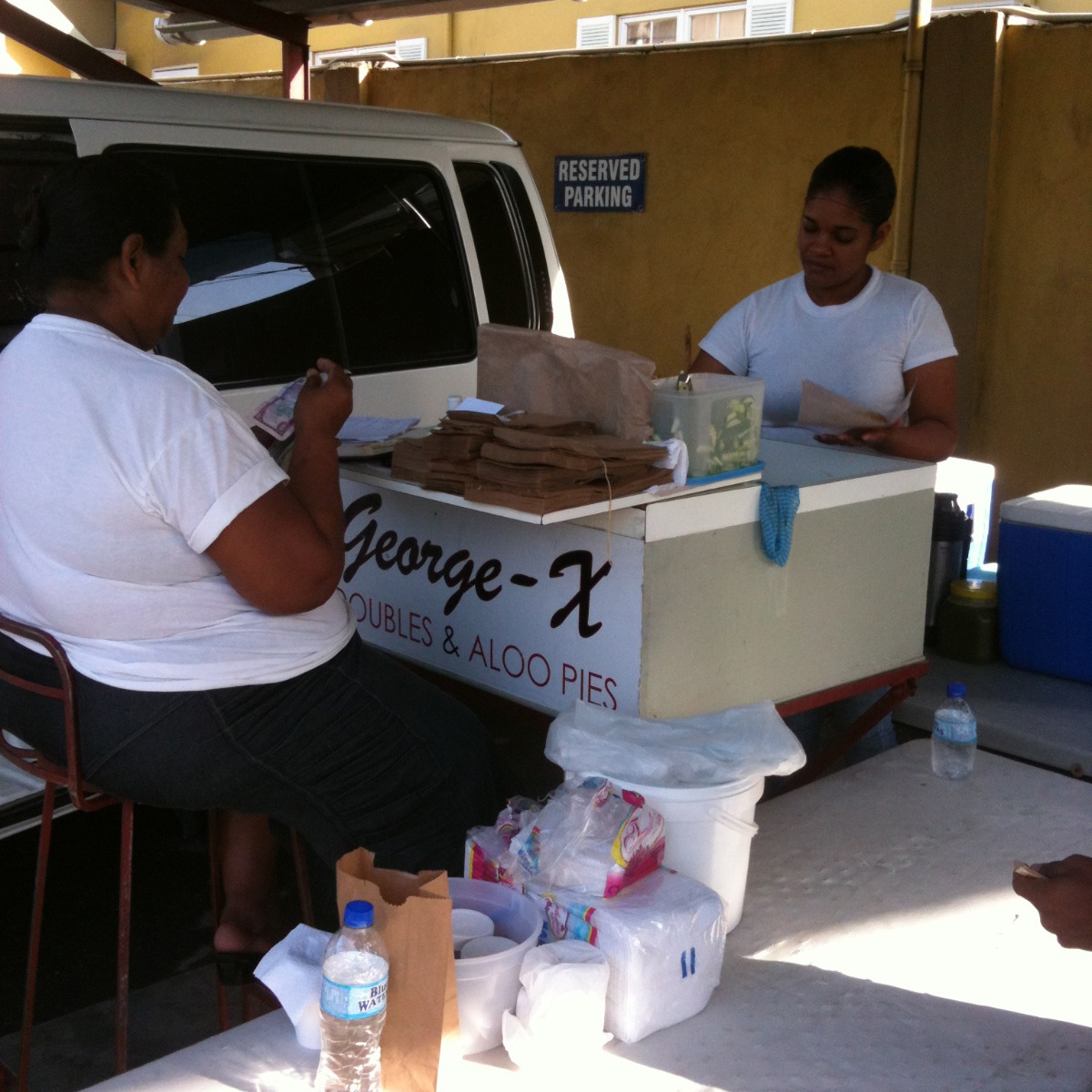 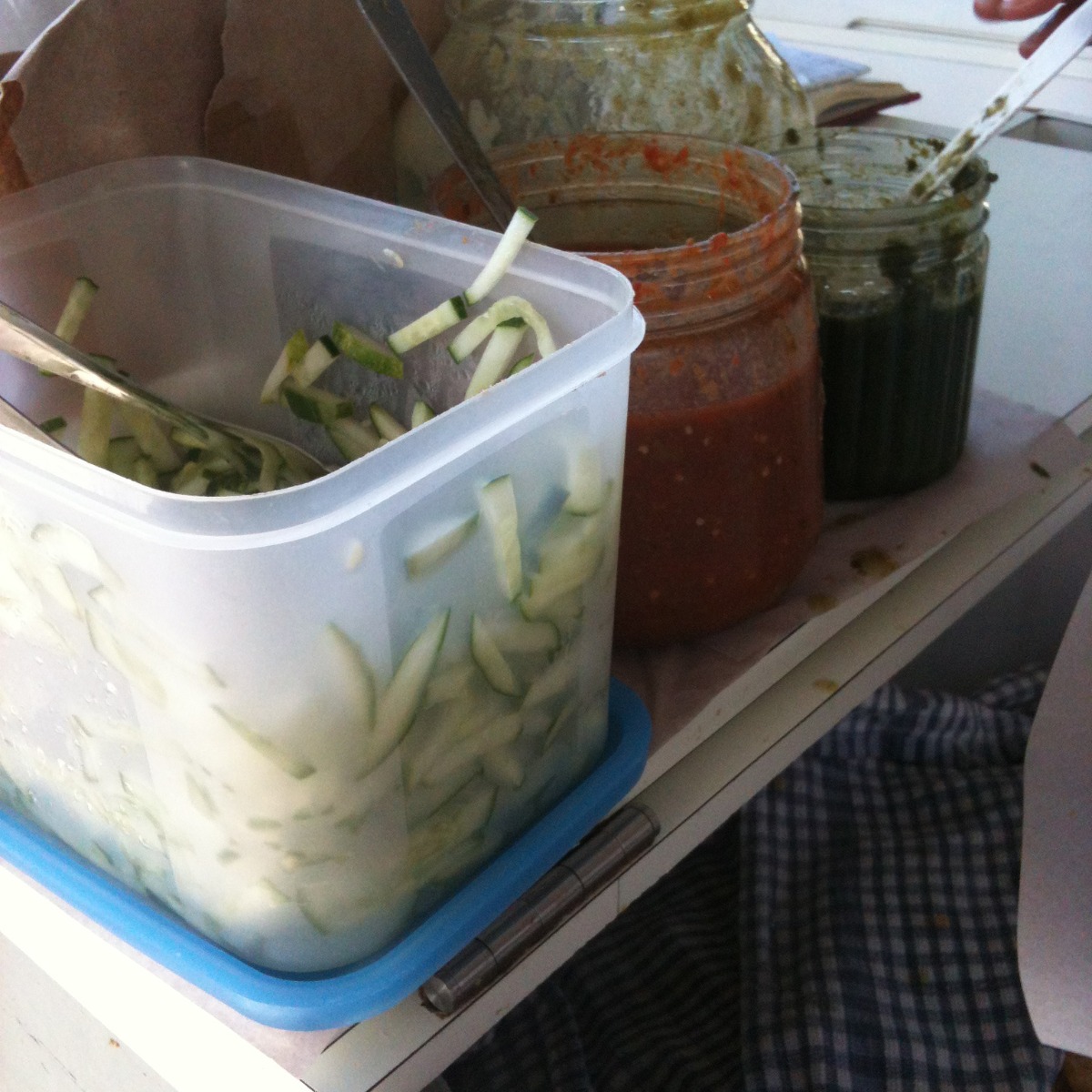 A doubles stand in the city centre - they tend to appear on street corners for just a couple of hours in the morning and sell out pretty quickly. The name George X, is because the owner is the ex-wife of a famous doubles seller called George, who runs a stand just down the road. Nothing like some post-divorce bad feeling to keep competition high! 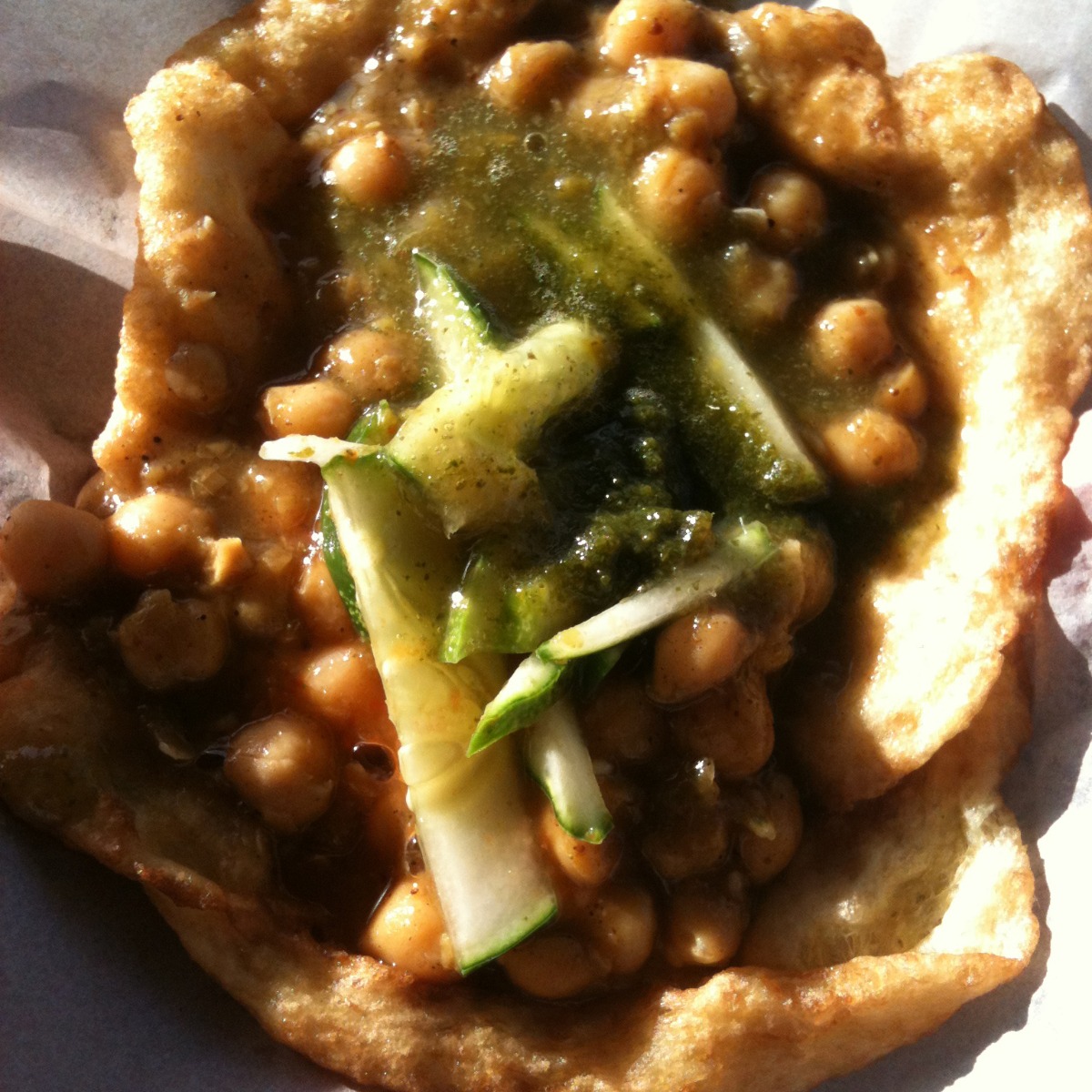 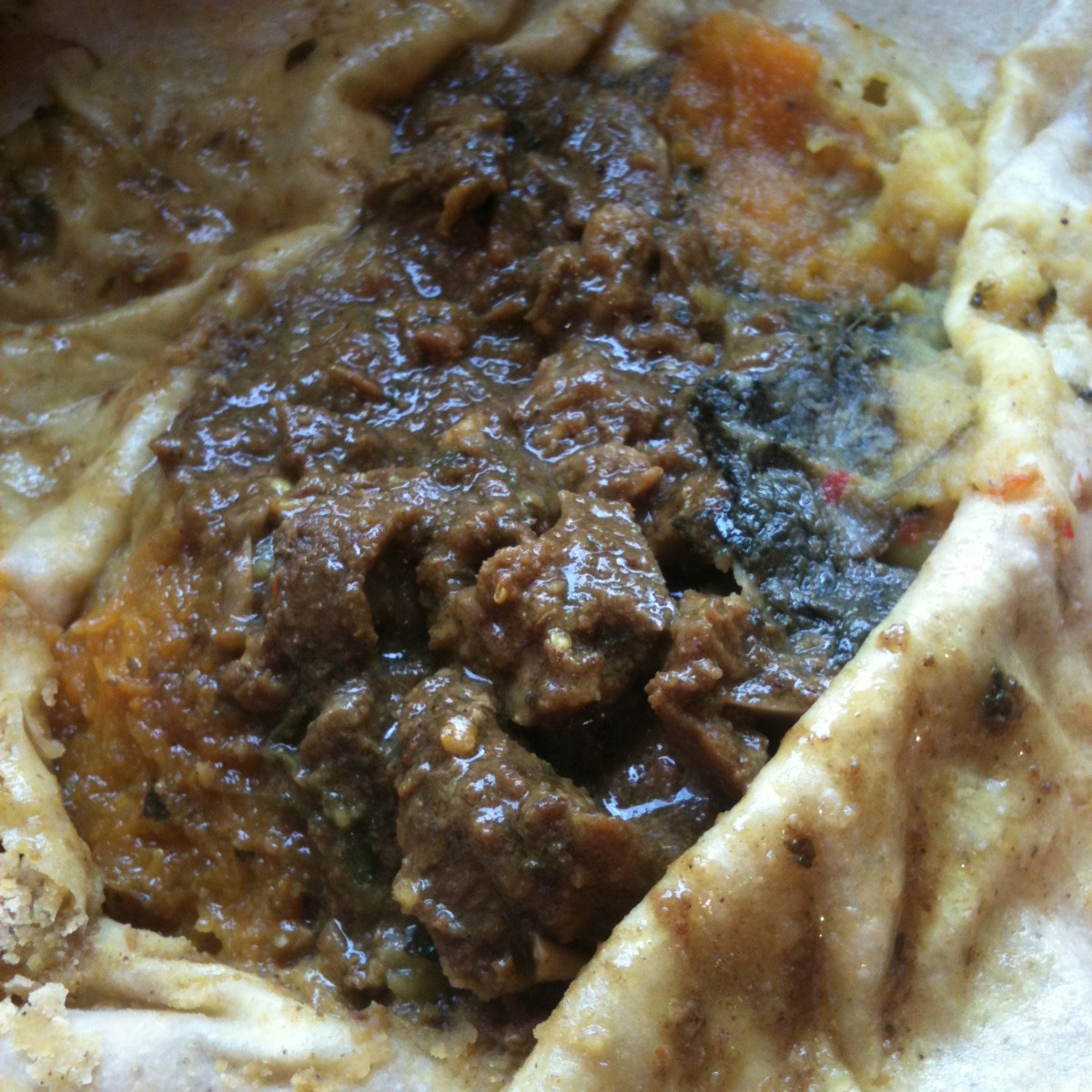 Doubles for breakfast ; Goat curry roti (apologies for the quality of the photo!)

Roti is a thin flat bread stuffed with ground dried split peas, then filled with all kinds of different curries (goat, chicken, beef etc) plus a dollop of potato curry, chickpeas, maybe some mashed pumpkin or sweet potato, pepper sauce, herbs and more. You can see some of the Indian origin in the paper thin breads and the vegetable curries, but from that starting point it's uniquely Trinidadian all the way..... 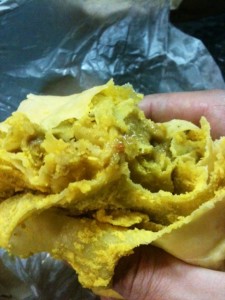 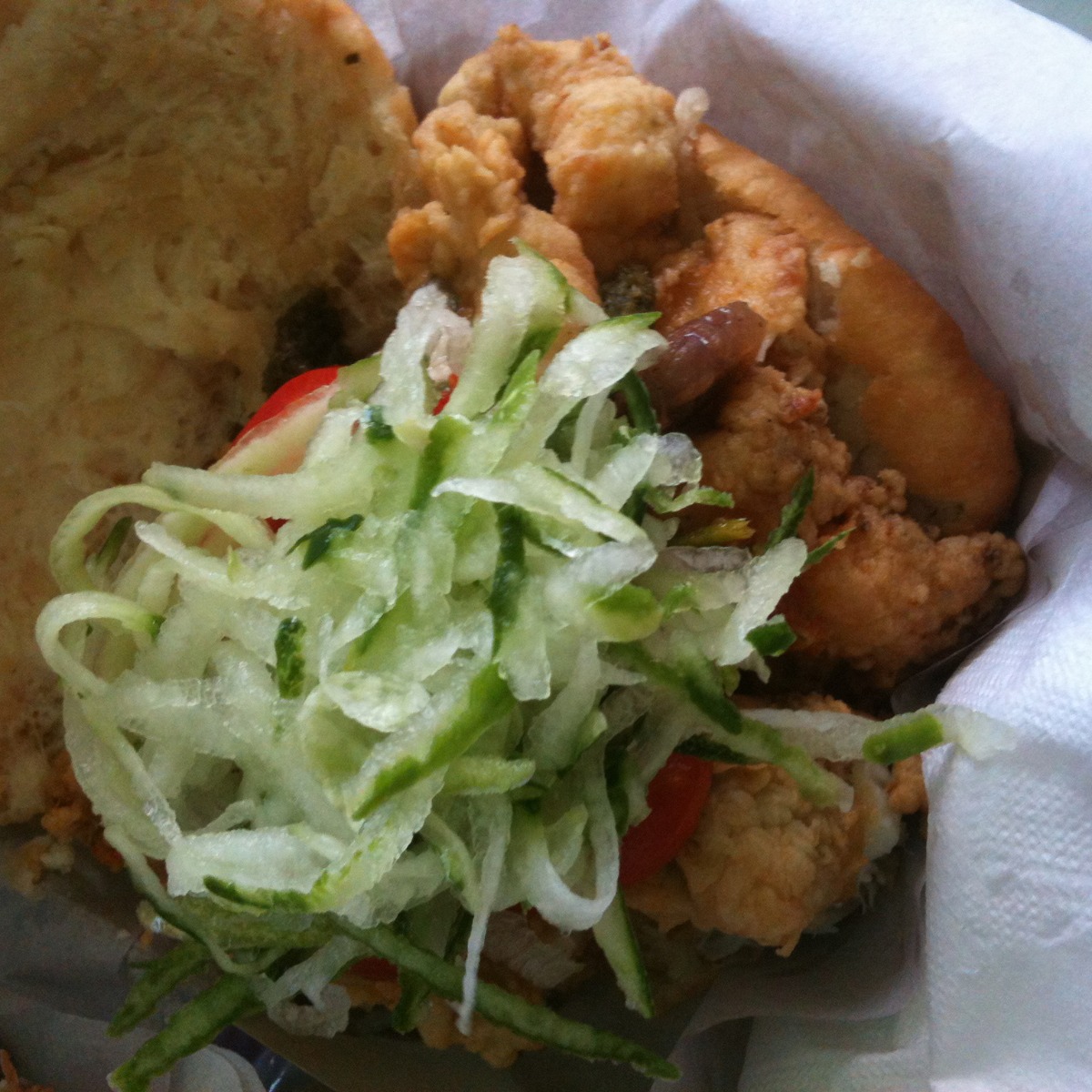 Shark & bake is fried shark or kingfish inside a piece of fried bread, then filled with salad, fresh pineapple, tomato and crucially lots of different sauces to your taste (tamarind, pepper, garlic, herb, mango and many more). 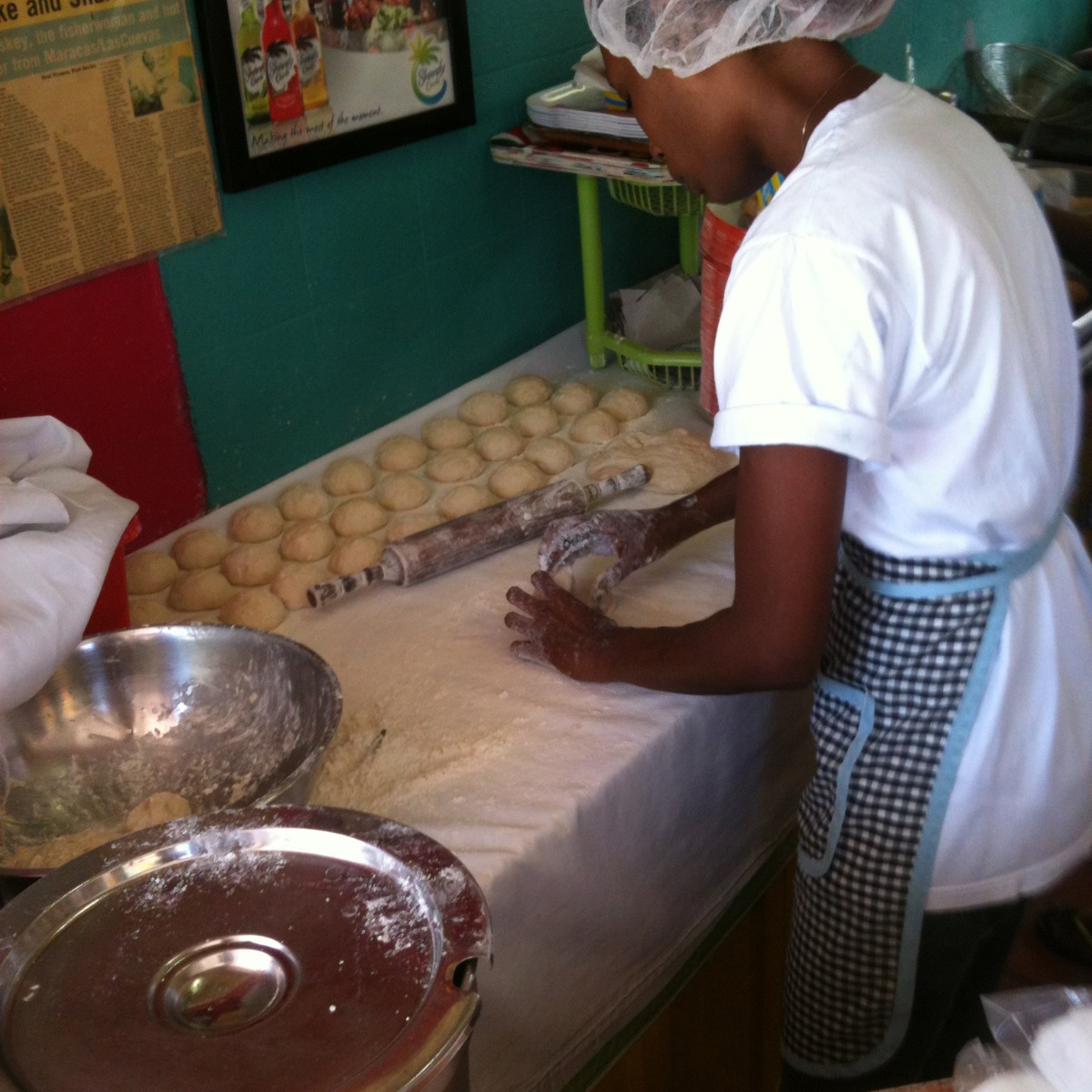 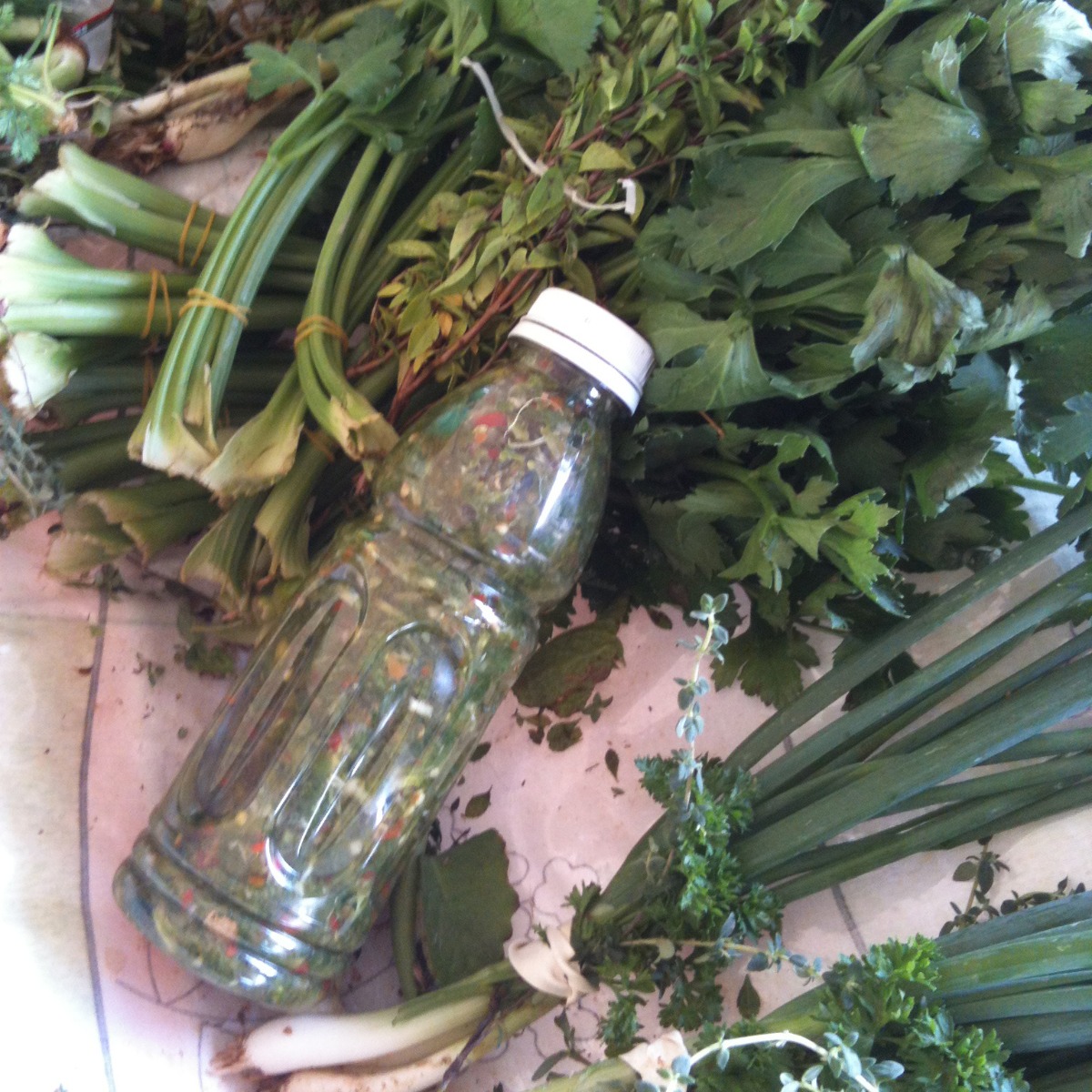 Making Aloo pies at Maracas beach ; The ingredients for green seasoning with a bottle of pre-made sauce in a local market

Probably THE key ingredient in Trinidad cooking is chadon beni sauce, also known as Green Seasoning. It's a thick green sauce a bit like a Trinidadian version of salsa or pesto.

The sauce can be made from any combination of chadon beni (also known as saw tooth coriander - it tastes a bit like normal coriander turned up to 11), Mediterranean coriander leaf, spring onion, parsley, thyme, chives, celery, garlic, sometimes a bit of hot pepper..... You can buy bunches of herbs to make fresh green seasoning in the markets or even from sellers on the roadside. 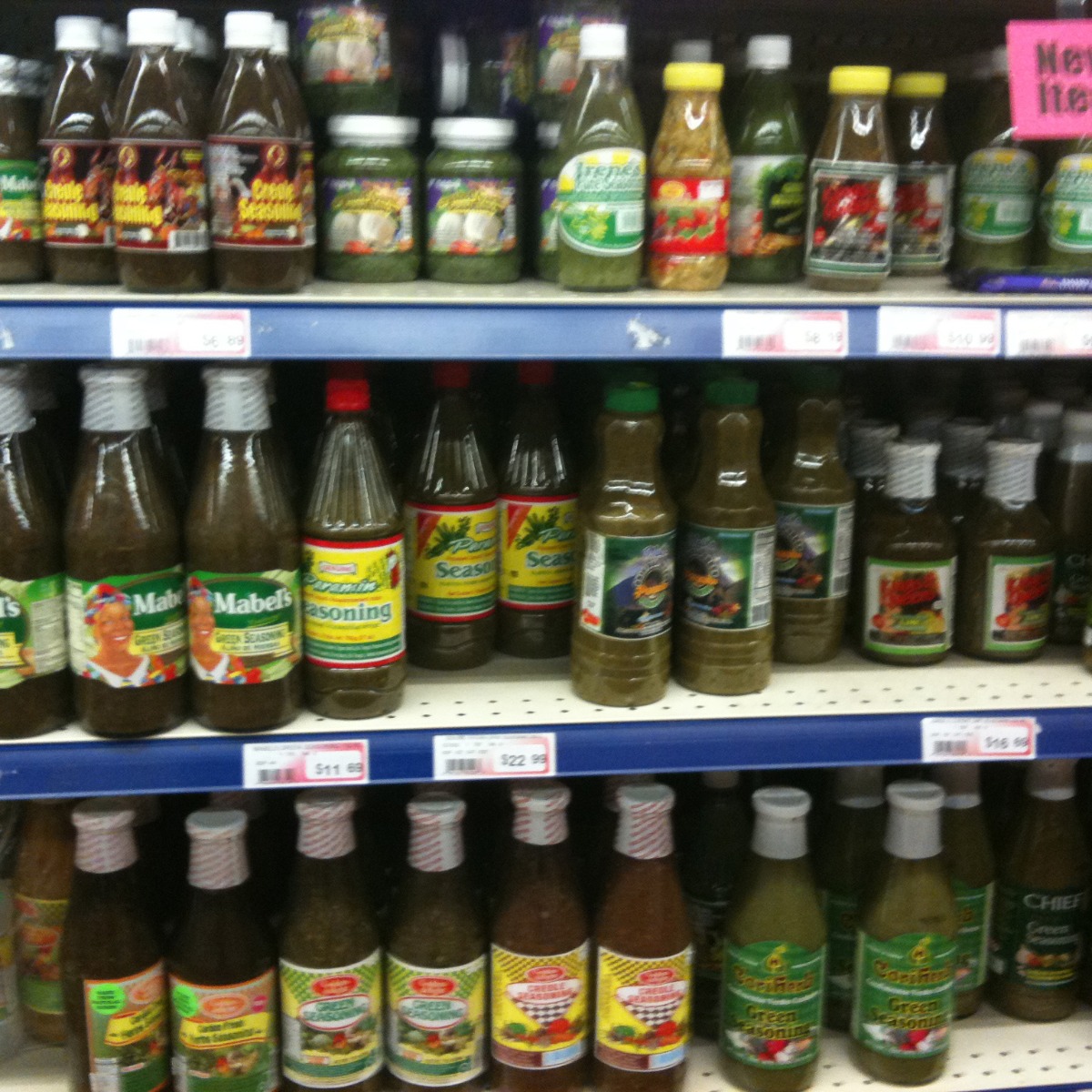 Green seasoning is used as a cooking ingredient as well as a table sauce. It seems like pretty much every bit of meat or fish cooked in Trinidad is marinaded in green seasoning before cooking, while all the street food tends to feature a generous portion of green seasoning spooned over the top before serving. 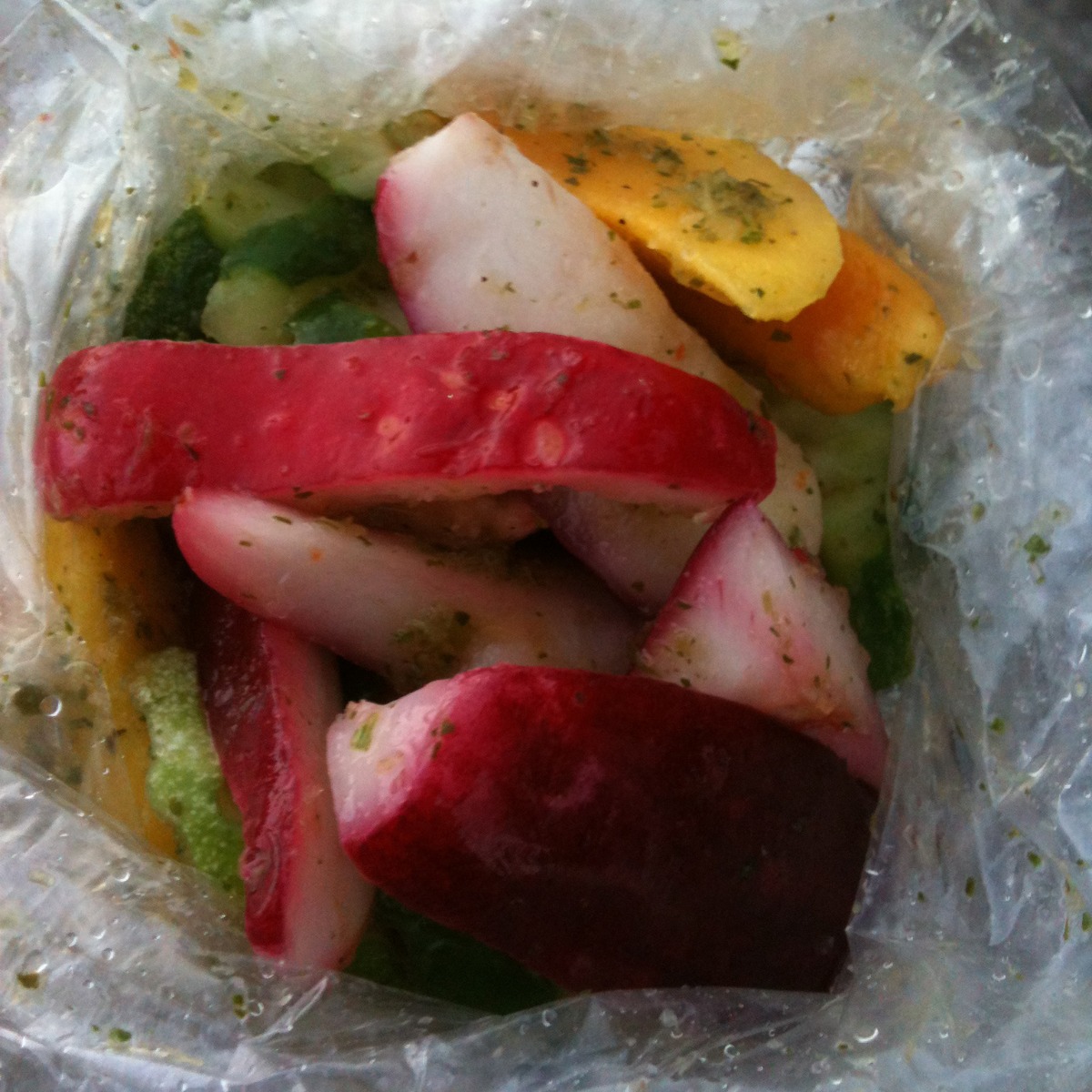 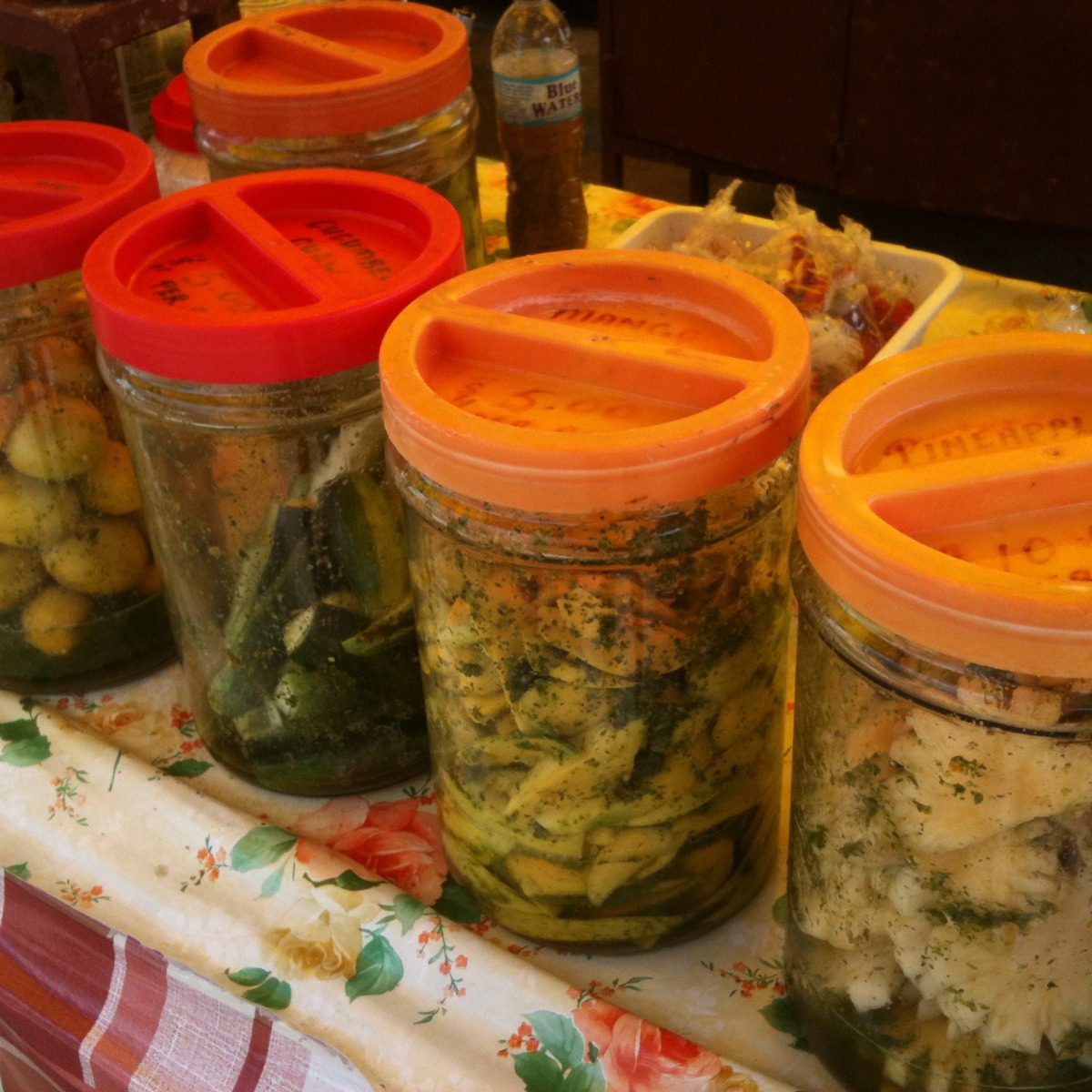 Mixed fruit chow to be eaten as a snack ; Fruit and vegetable chows at the beach in Maracas

Green seasoning is also used to dress chows which are tangy, spicy, salty mixes of raw fruits and vegetables seasoned with lots of salt, green seasoning, lime and a splash of hot pepper sauce.

The other key seasonings in Trini cooking are hot peppers and dark roasted spices. Pepper sauce is the condiment that brings all this food together and it seems like no Trini dish would be quite right without it - there are various versions ranging from explosive to thermonuclear and the peppers are always used fresh with a bit of onion, garlic, vinegar and salt to make a tangy spicy yellow sauce. 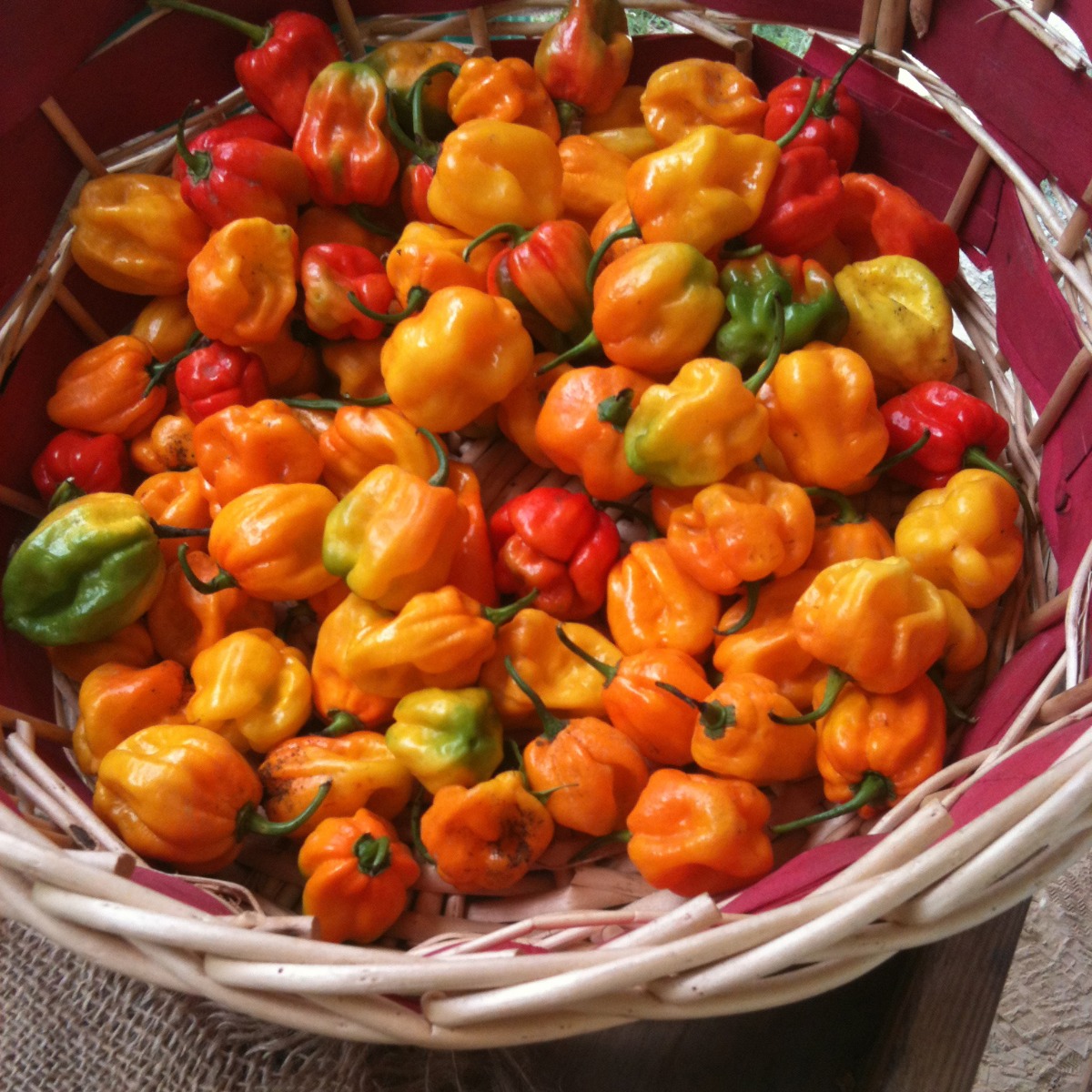 Hot peppers for sale at the market

The ground spices are roasted very dark (much darker than we'd normally roast them at the spicery) which gives a characteristically deep dark colour and a savoury toasted flavour. Even fresh garlic cloves are often fried until nearly black to give a deep colour and intense flavour - a typical French chef would have a heart attack seeing that because he'd think the taste would be unbearably bitter, but it's actually really effective and gives incredible depth of flavour to the cooking, particularly when combined with caramelised sugar and fresh herbs as many of the meat stews are. 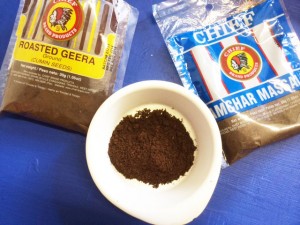 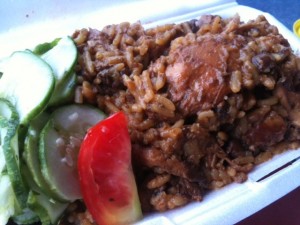 The other dish that sees West Africa meet India in a uniquely Trini way is pelau. The average Indian might recognise chicken cooked together with rice as a biryani or pilau, but they probably wouldn't expect to see pigeon peas, coconut, pepper sauce and herbs the way the Creoles make it. Like the rest of Trinidad's cooking you've got to say it's unexpected but it's genuinely delicious and perhaps the food of this little island won't stay such a secret for long! 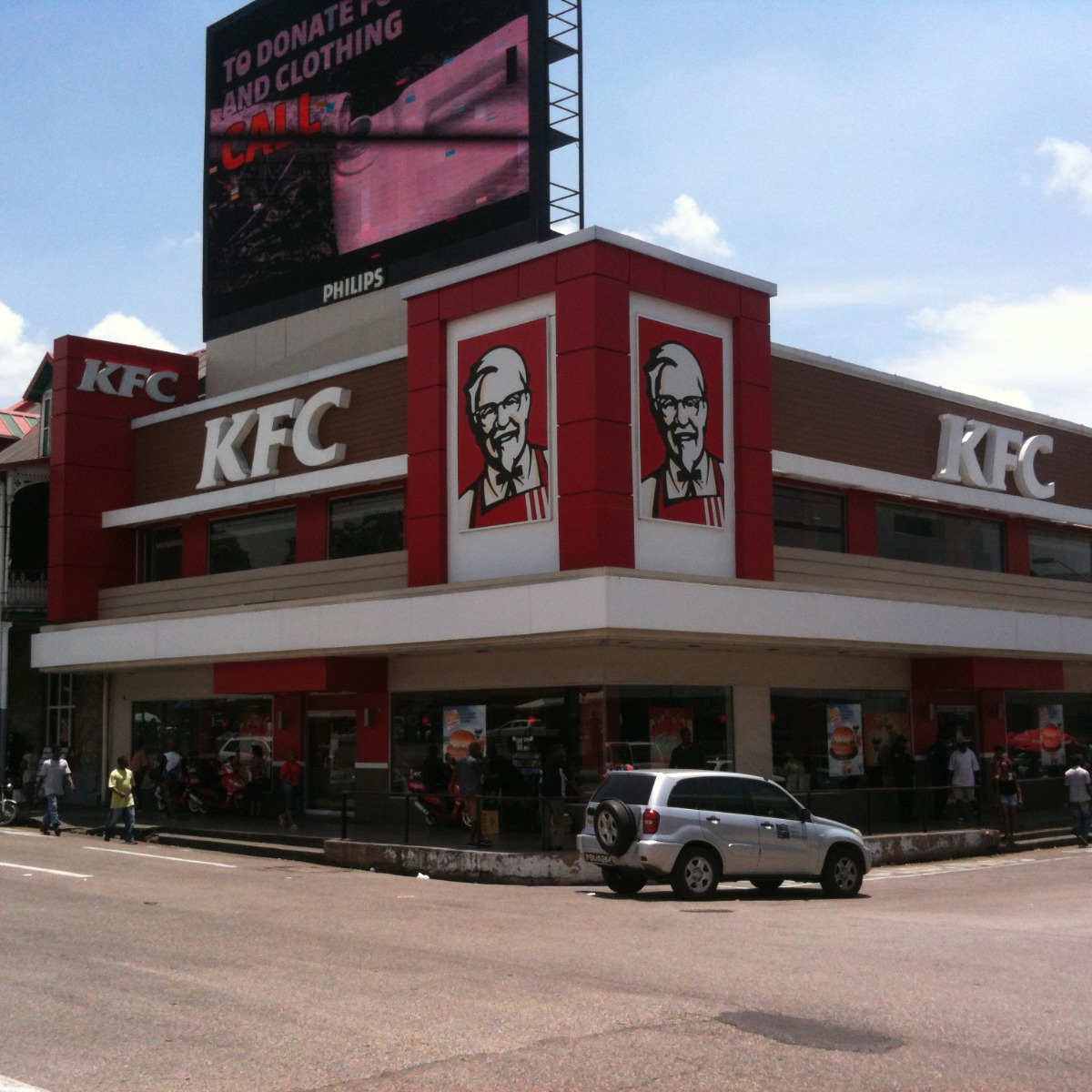 After raving about the food, locals proudly point out that this 24hr outlet is apparently the highest grossing KFC..... IN THE WORLD! Maybe that's progress, but at least the doubles stands and the aloo pie shops are still doing good business so I hope they all hang on because the food they make is way out of KFC's league.

And here's the real sound of Trinidad - a soca playlist courtesy of my friend Sarina....