I have taken a trip back home to Kaş, a small town along the Mediterranean coast of Turkey and from here I will explore some typical food eaten in the local villages in this area. Exotic spices are not a dominant feature of Turkish food and this region is no exception, they do however use a lot of red pepper which they often prepare themselves, drying and then milling both sweet and spicy red peppers. They sometimes mash the dried spicy peppers which produces the famous spicy pepper flakes (Pul Biber). Other staples of the local cuisine are dried herbs which are mostly prepared by the villagers themselves or bought from the villagers in the local weekly bazaar. Mint, bay leaves and various different types of thyme can be found — wild oregano is abundant in spring and used for salads and cooking but there are some other types of thyme which are more commonly used with meat dishes.

A very common food to have for breakfast is the local double roast tahini (more about this futher down!) together with pekmez — a sweet molasses made from grape juice. These are either mixed together, creating a sweet, ultra nutritious gloop (to rival the best chocolate spread!), or separately, by dunking homemade flat bread in the sweet molasses and then the rich roasted tahini. Pekmez can be made of many different fruits, most commonly grapes, carob and mulberries. I was lucky enough to help my neighbours making grape pekmez which I found out to
be a very long process!

First we picked a lot of grapes —and
this is only some of them! 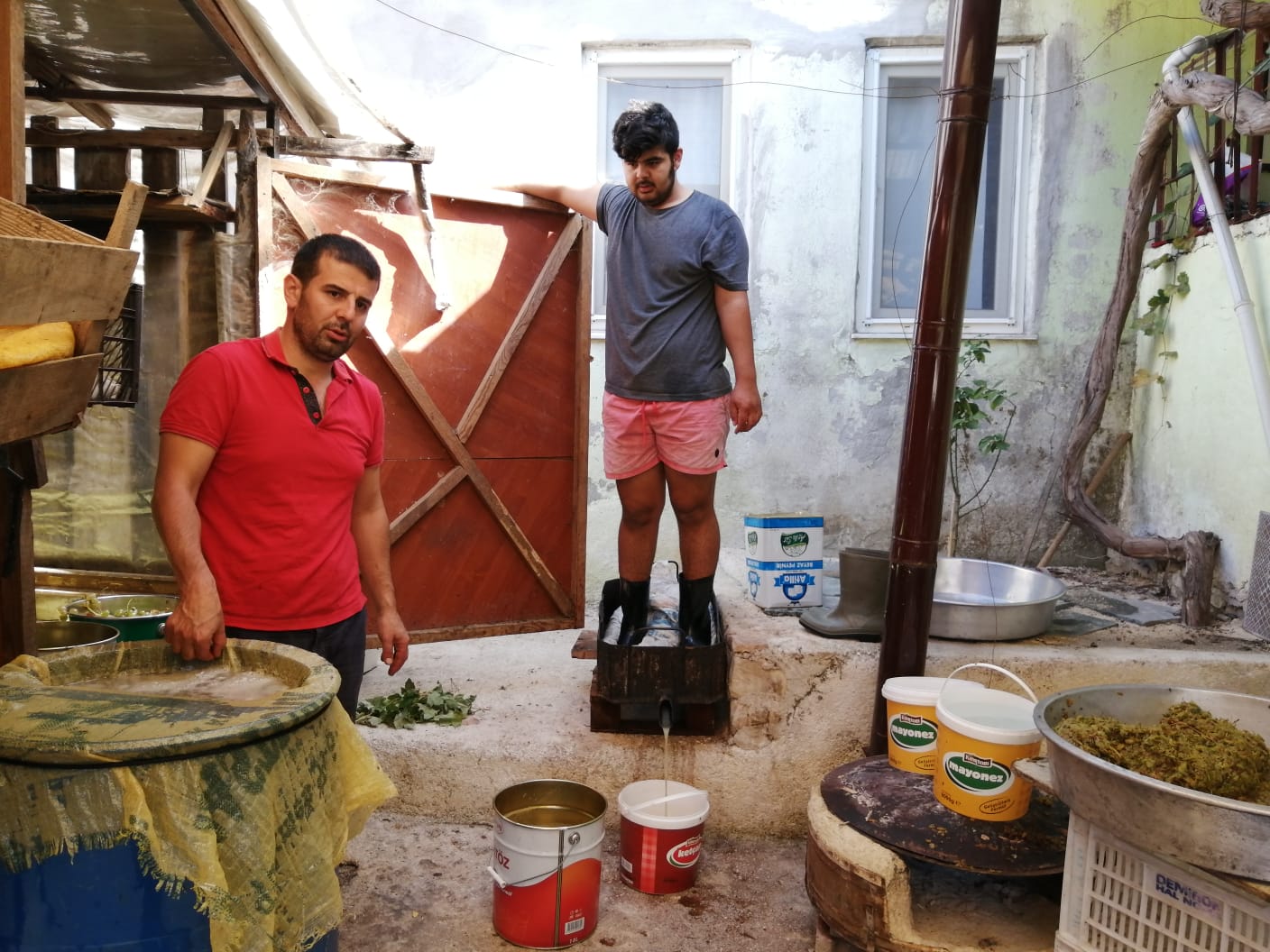 The grapes were then put in sacks and stamped on to get the juice out. Boiling water was also poured over the remaining grape pulp to get all the possible nutrients out. 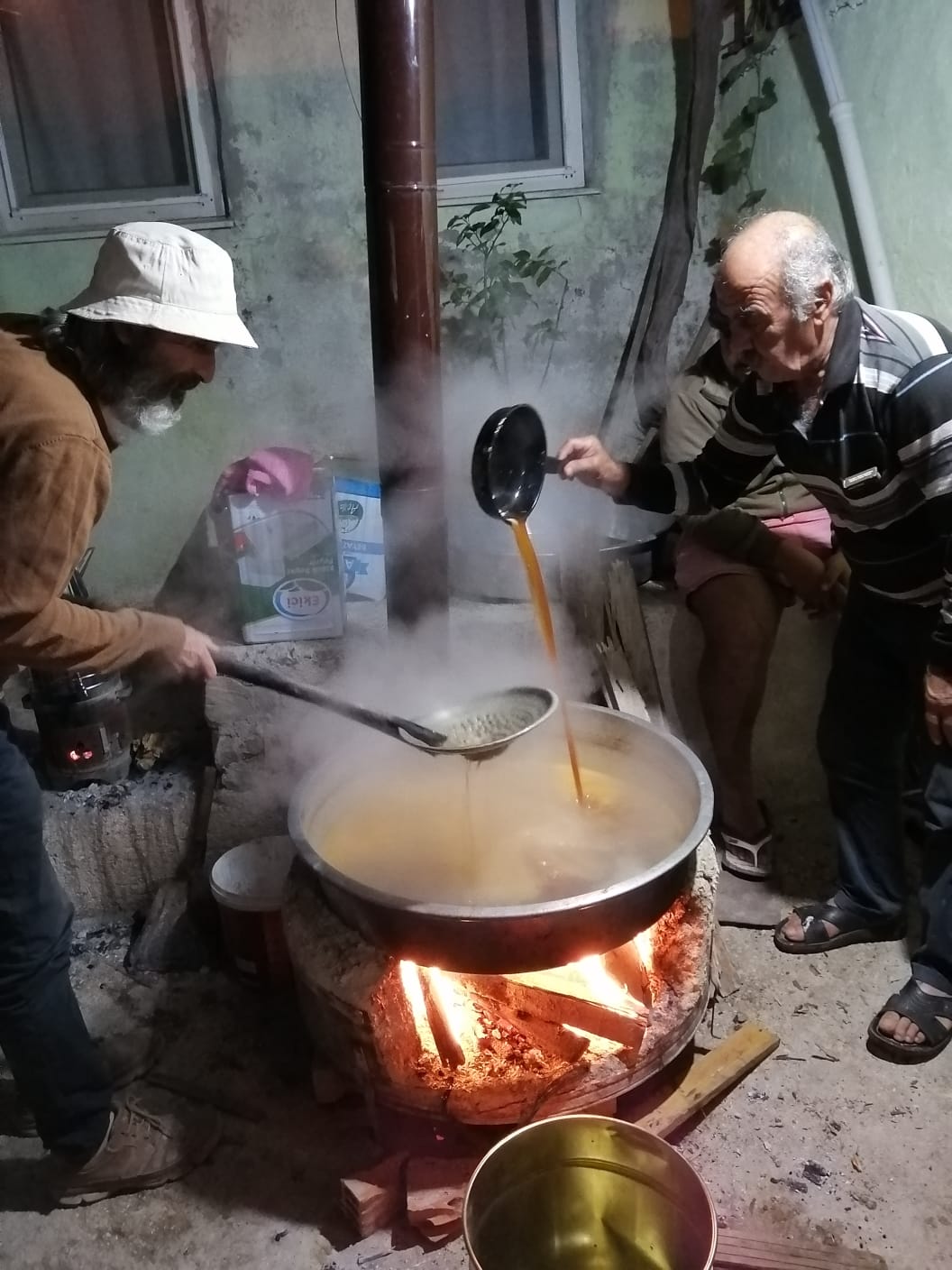 The grape juice is first boiled briefly with a specific white soil that is found in the area added. This is then left to settle, the special soil is said to draw all impurities and unwanted sediment to the bottom with it —it’s a key ingredient! After it has settled properly the remaining juice at the top is syphoned off in batches and boiled in a shallow pan over a wood fire for around four hours until it gets a consistency slightly thicker than maple syrup. 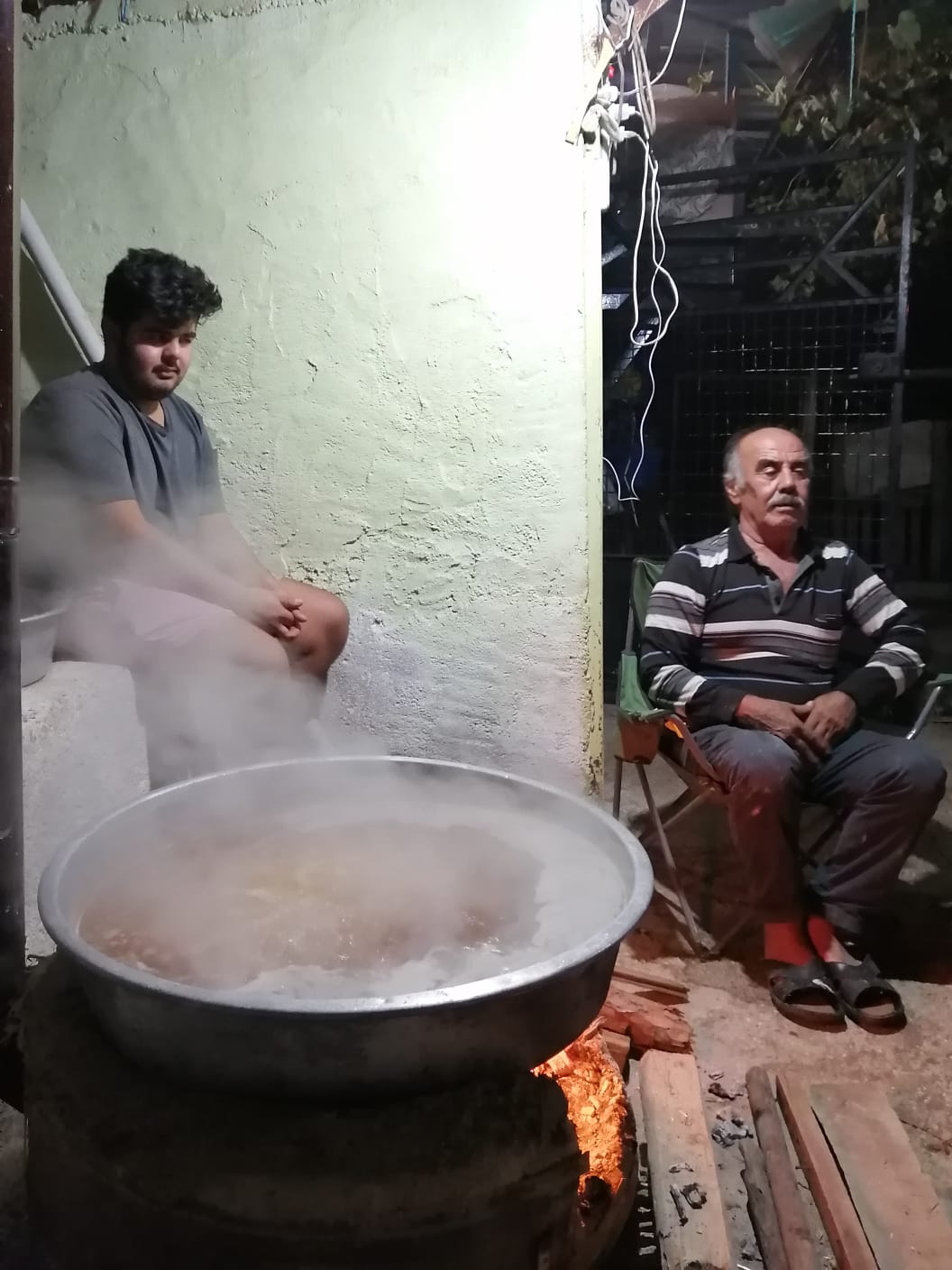 The fire burnt all night, with various members of the family taking turns to keep it going each batch being collected in big tins and jars ready to be stored. The whole process took over 24 hours and became quite sociable with friends and neighbours popping round to taste the pekmez, have some tea, and keep the pekmez makers company.

In the Antalya region tahini is roasted to get a much darker looking, richer and nuttier tasting tahini. It is often called ‘double’ roast tahini but that seems to mean that it’s well roasted as opposed to being roasted twice. I found out that there is a small family owned tahini mill only 40 minutes from our village so I went over to see how it is made. The owner of the mill told me that his great great grandfather had set up the business and that they have been producing tahini there for over a hundred years. He said that the secret of good tahini was that the sesame must be homegrown (not imported) and that it must be roasted carefully and only on wood fires.

The sesame seeds are first soaked in water and then
put through a machine which gets rid of the outer
husk.

They are then roasted in a wood fire oven
rather like a pizza oven. They are constantly
moved around with a long closed rake so that
they roast, not burn. This process takes about
an hour per batch.

Because it’s so hot during the summer months in Turkey they only produce tahini one day a week between May and September as the roasting is a very hot job! Winter and spring are when full production happens and the mill is open five days a week sending its  ‘double’ roast tahini all over the country.

The roasted seeds then go through another machine which separates off any excess husks.

The golden roasted seeds are now poured into a
stone mill.

And out pours this super nutritious, golden tahini, still
warm from the milling! Absolutely delicious! 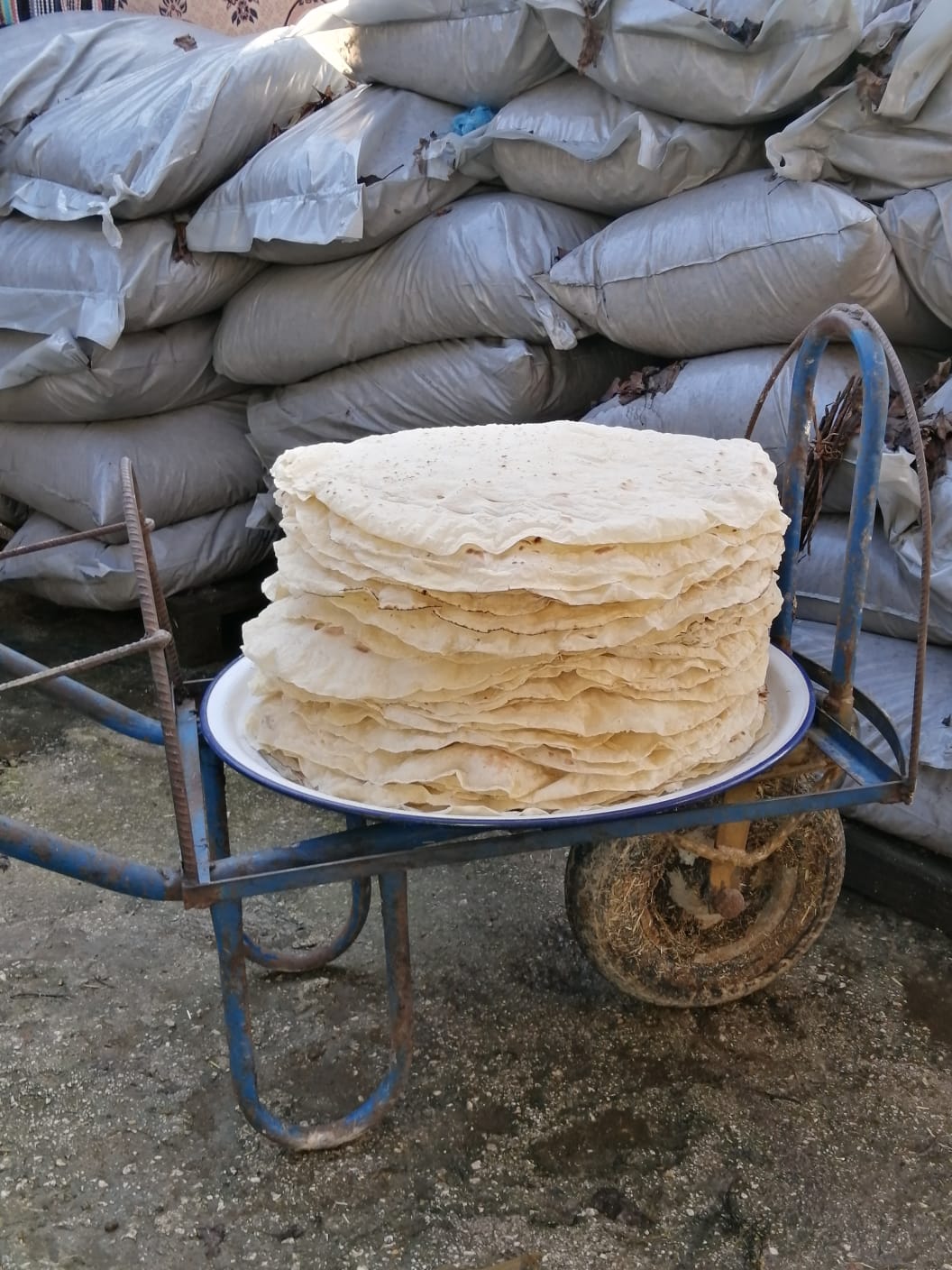 The perfect way to eat tahini and pekmez is with the local flatbread called ‘Yufka’. This incredibly practical form of bread is made in large quantities because it is completely dry and can be kept for months. It stays like a crisp bread until it is sprayed with a little water — it then becomes a malleable floppy disk  that can be torn, rolled, folded and dipped as required. 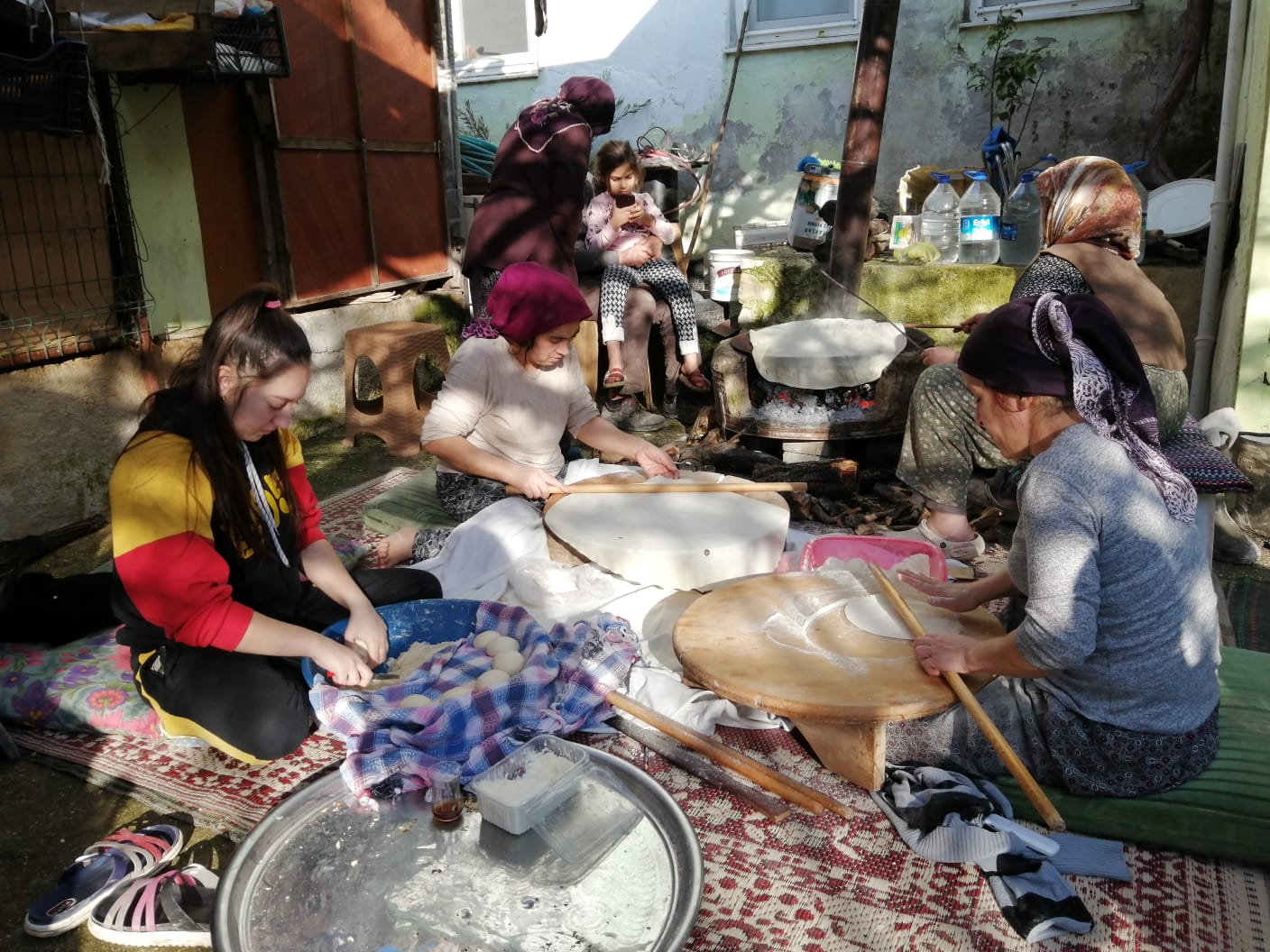 Making this much Yufka bread is a lengthy
process and is therefore a bit of a
community event. A few households often
come together to make enough bread for
all of them for a month or so. 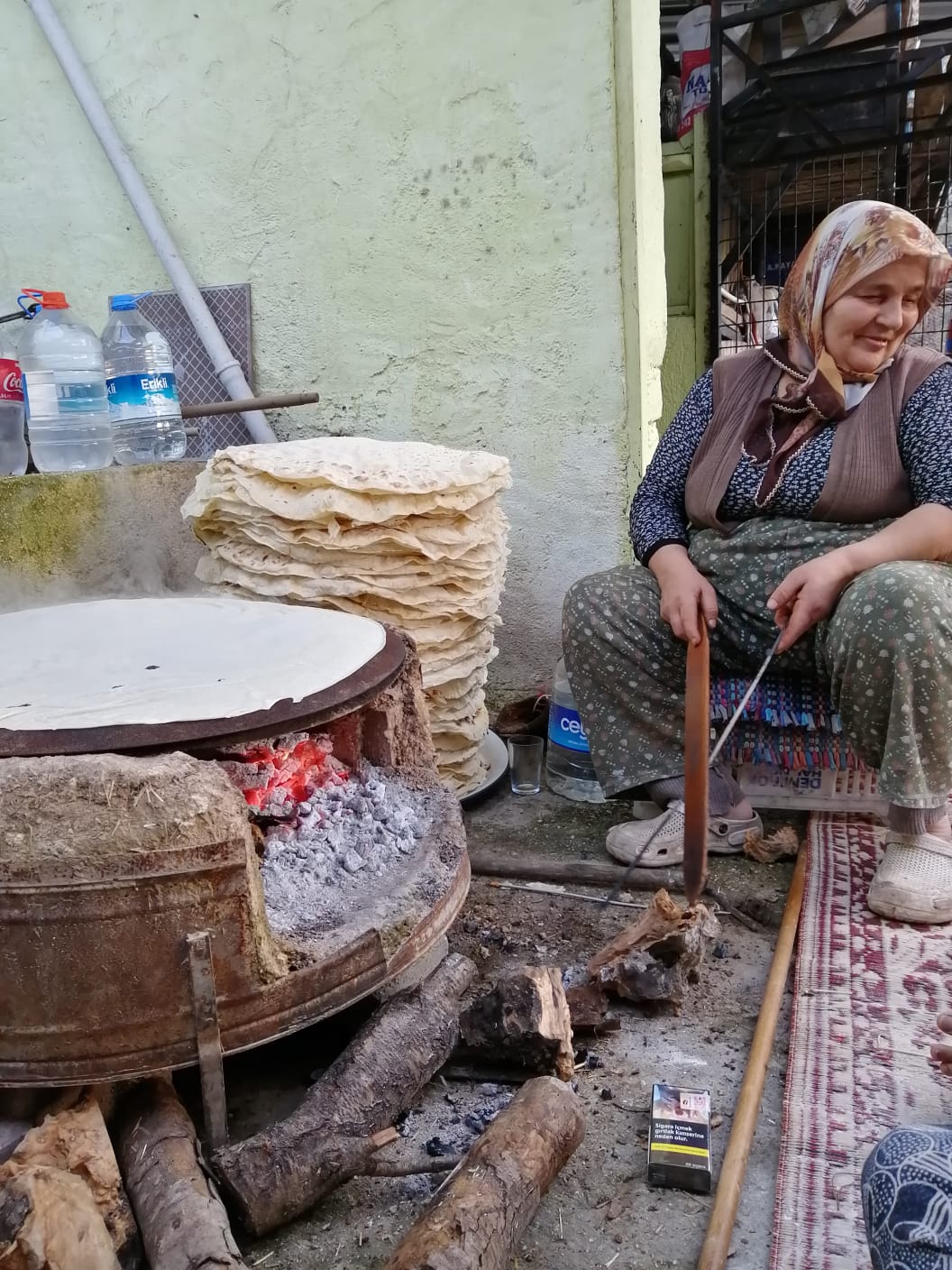 The bread is made of a simple dough, just flour water
and salt, and is cooked over a wood fire on a large
metal plate called a ‘Saç’.

For lunch one day we had stuffed vine leaves which we made together with our neighbour Ganimet Teyze. Other than the rice, she sourced all the ingredients from her garden or from her pantry where she keeps a multitude of homemade ingredients including dried vegetables and fruits (such as figs), cured olives, olive oil, honey, pekmez, dried herbs and her own, incredibly tasty, homemade sweet red pepper (paprika). This is Ganimet Teyze’s cute house.

The vine leaves are picked in May. People use fresh leaves at this time of the year for their stuffed vine leaves but they also pickle some in a briney solution for use throughout the year. Here Ganimet Teyze is using her discerning eye to choose the best leaves — making sure to choose the fresher, shinier leaves that won’t be chewy or veiny when cooked.

The leaves are blanched in boiling water and then put to one side.

Then the rolling begins, which is quite a lengthy process for something which is eaten so quickly! We were encouraged to make them quite thin and tight — too much filling is seen as unprofessional!

Once all the leaves are stuffed they are fit tightly into a saucepan with a good lid. Water is added (but not too much) and a few slices of lemon, and then after being brought to the boil they are cooked on a low heat until the
rice is tender. They were absolutely delicious!

Piyaz (a kind of bean salad) is a well known dish in Turkey, but people are often surprised in the Antalya region as this dish is traditionally served with a tahini dressing. The mixture of beans and tahini might sound a little heavy, but the dressing is made with white tahini (un-roasted) which has a light flavour and the addition of wine vinegar, olive oil and chopped fresh vegetables makes for a really unusual, fresh and nutritious treat. The Piyaz is served with a chopped up hard boiled egg and often given a sprinkling of hot chilly flakes (pul biber) and some ground cumin.

In the town of Elmali which is up in the Taurus Mountains, there is a little restaurant which makes the best piyaz I’ve ever tasted. Kofte - Piyaz is their speciality, the sish kofte mix is made by squishing the kofte mix onto long skewers which is grilled and then served on fresh pide bread with grilled peppers and onions.

This same restaurant also serves a complementary sweet dish of Flour Helva (helva being a general term for many sweet dishes).

This creamy desert is incredibly simple, being made only with butter, flour, milk and sugar —which explains why it tastes so good! The key to the flavour is the long process of frying the flour in the butter at a low heat before the sugary milky solution is added. This frying process gives it a lovely caramel flavour. This sweet is often given out to friends and neighbours (or anyone passing for that matter) on special days such as the festival of Eid where prayers are said during the long process of frying the flour.

Luckily it can also be found in some restaurants and is often eaten with a sprinkling of cinnamon on top.

The Antalya region and its villages aren’t known for their fancy dishes but they have an abundance of good nourishing produce which they use simply and generously.