Puebla is an incredibly attractive city in central Mexico full of beautiful churches, stunning Spanish colonial buildings decorated with old tiles and colourful painted walls, and it's also home to some of the best food in the country. 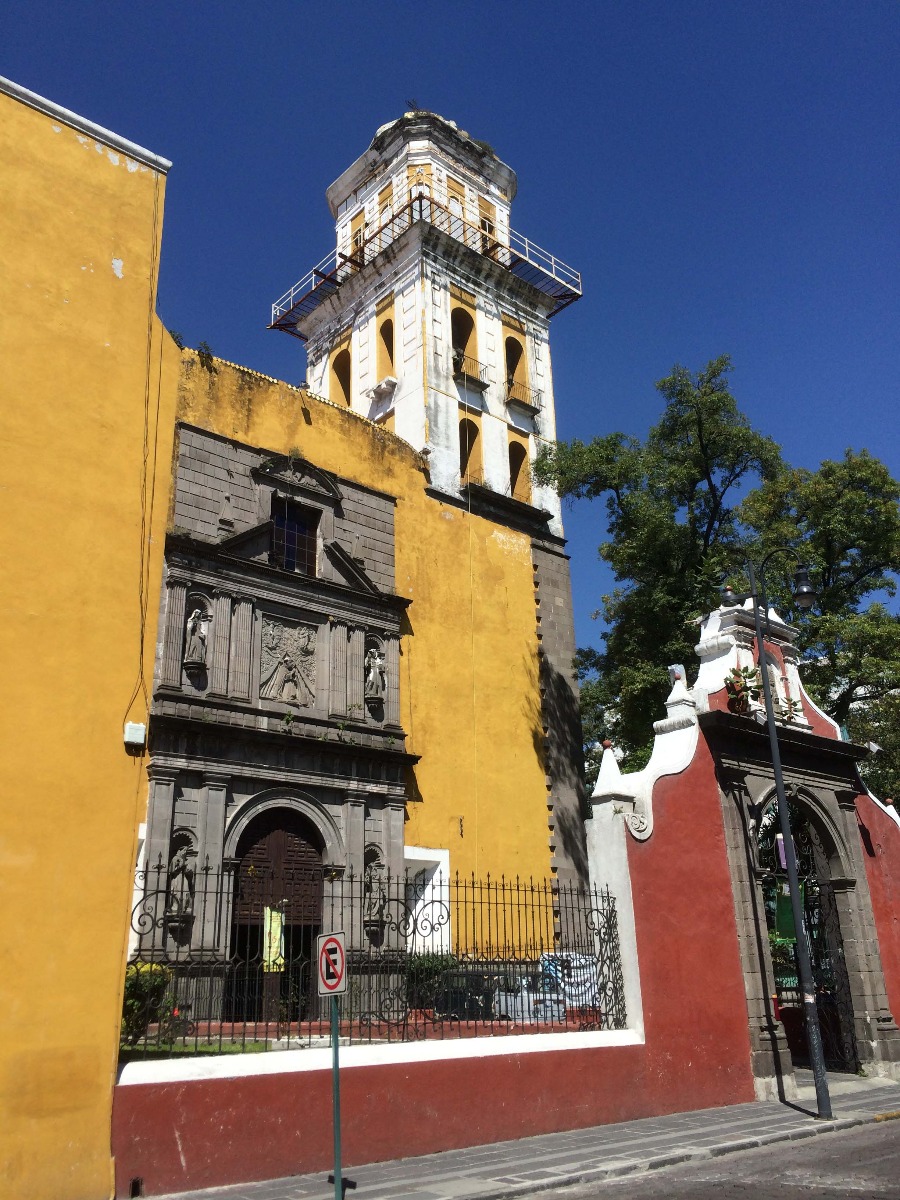 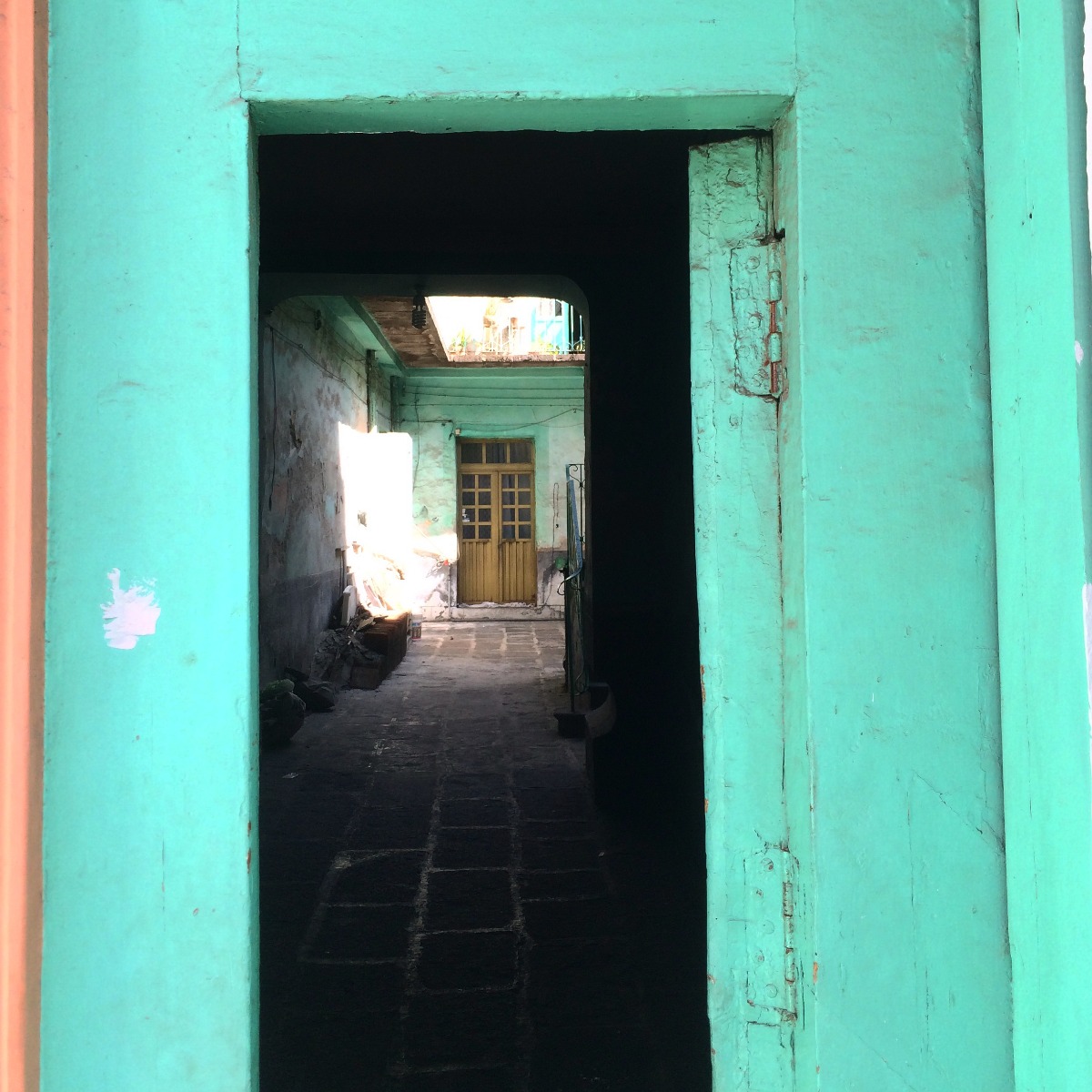 The most famous dish here is Mole Poblano (pronounced Mo-lay, not like the animal that lives in your lawn). Mole is an amazingly complex mix of dried chillies, nuts, seeds, spices, herbs, garlic and chocolate blended together to make a thick dark sauce. It's sweet, rich and spicy all at once and a good one shouldn't have any of the ingredients being so prominent that you can identify them individually. To be honest it's a fairly delicate balancing act and I had one or two that were a bit sweet or chocolatey and you can imagine that baked chicken coated in thick chocolate sauce tastes a bit......hmmm 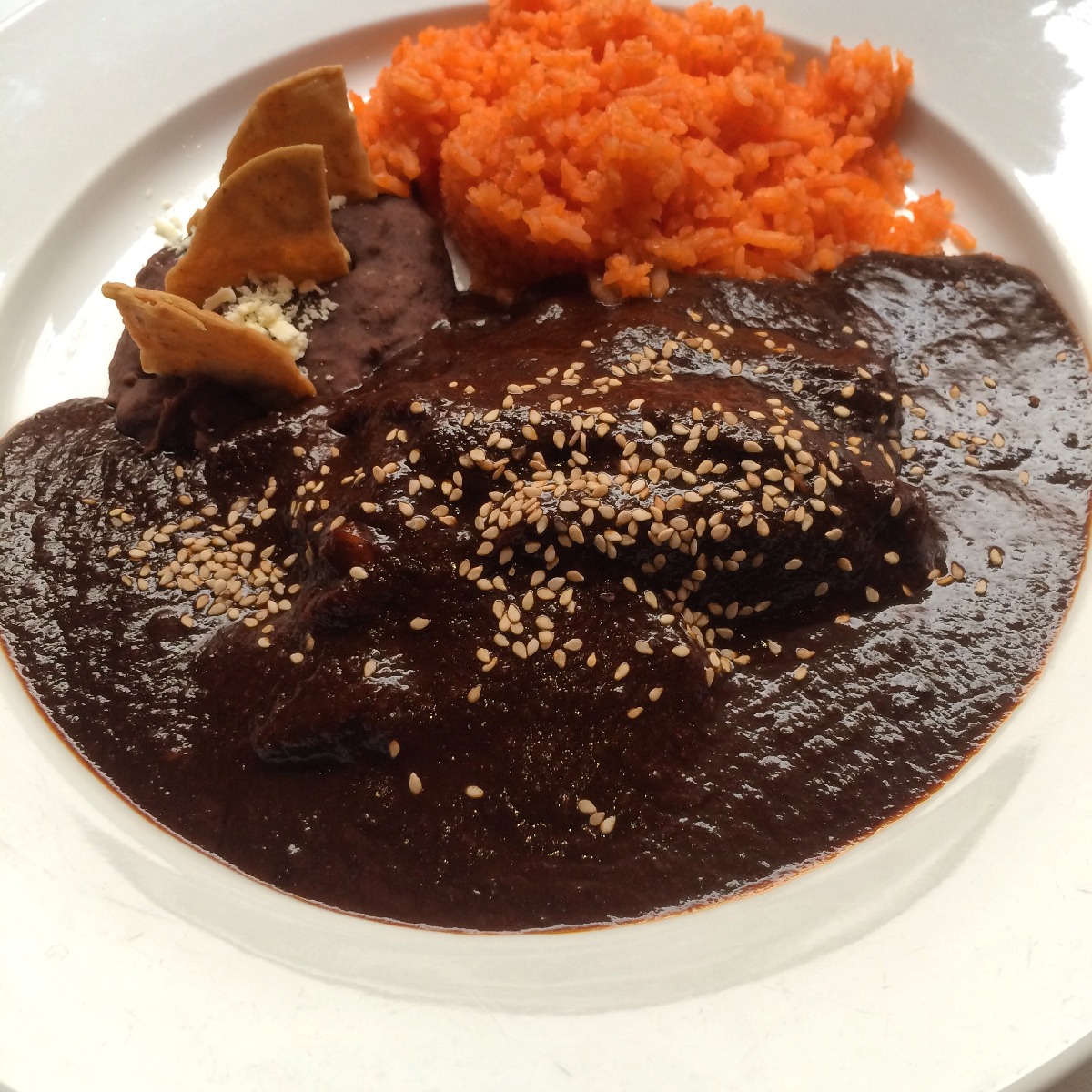 A good Mole Poblano (a light hand with the chocolate needed)

The story goes that the nuns in a convent in central Puebla had an unexpected visit from the archbishop and had nothing ready to serve him. In a panic they mixed together what they had - a few dried chillies, spices, nuts and some stale bread then served it as a sauce over some turkey. The archbishop loved it, asked what it was and was told mole meaning a mix. The dish became popular and is now probably THE classic dish of Mexico. 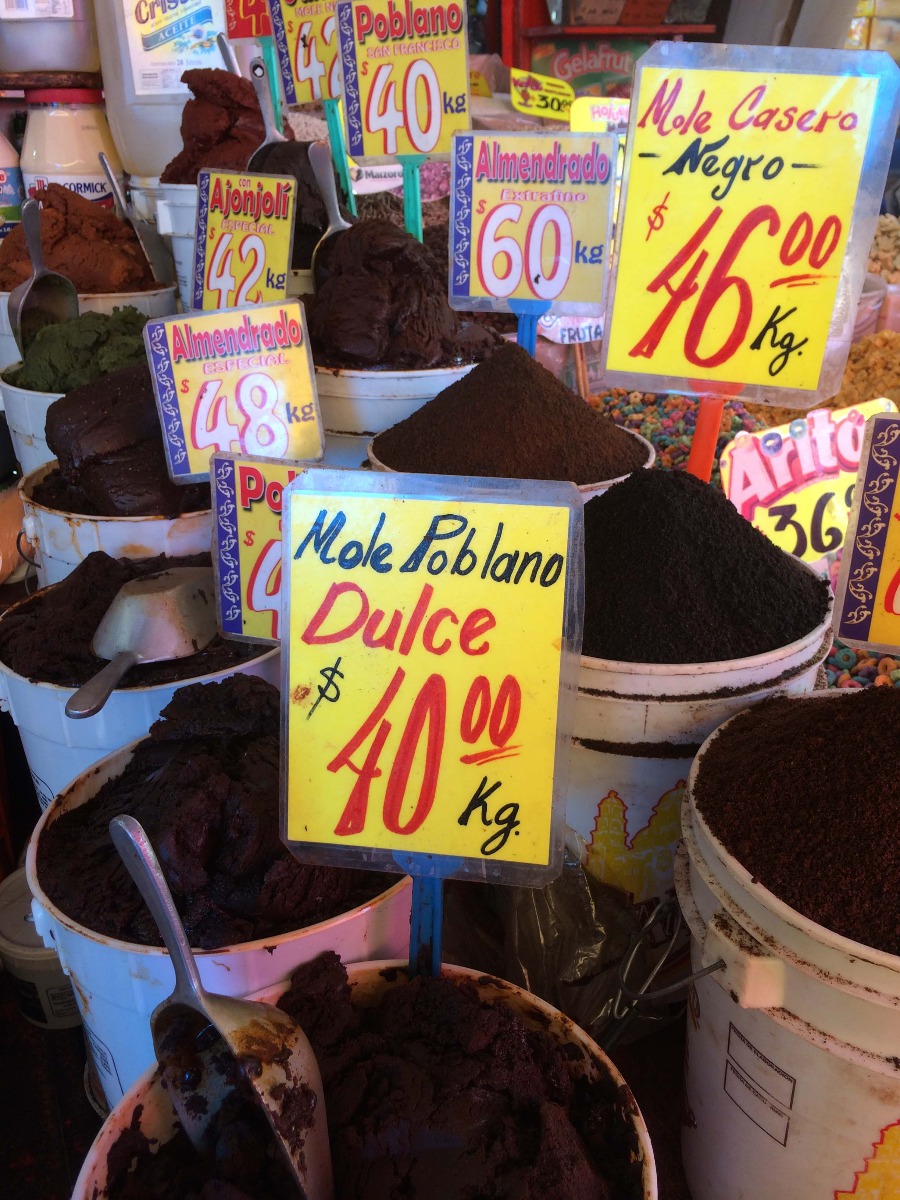 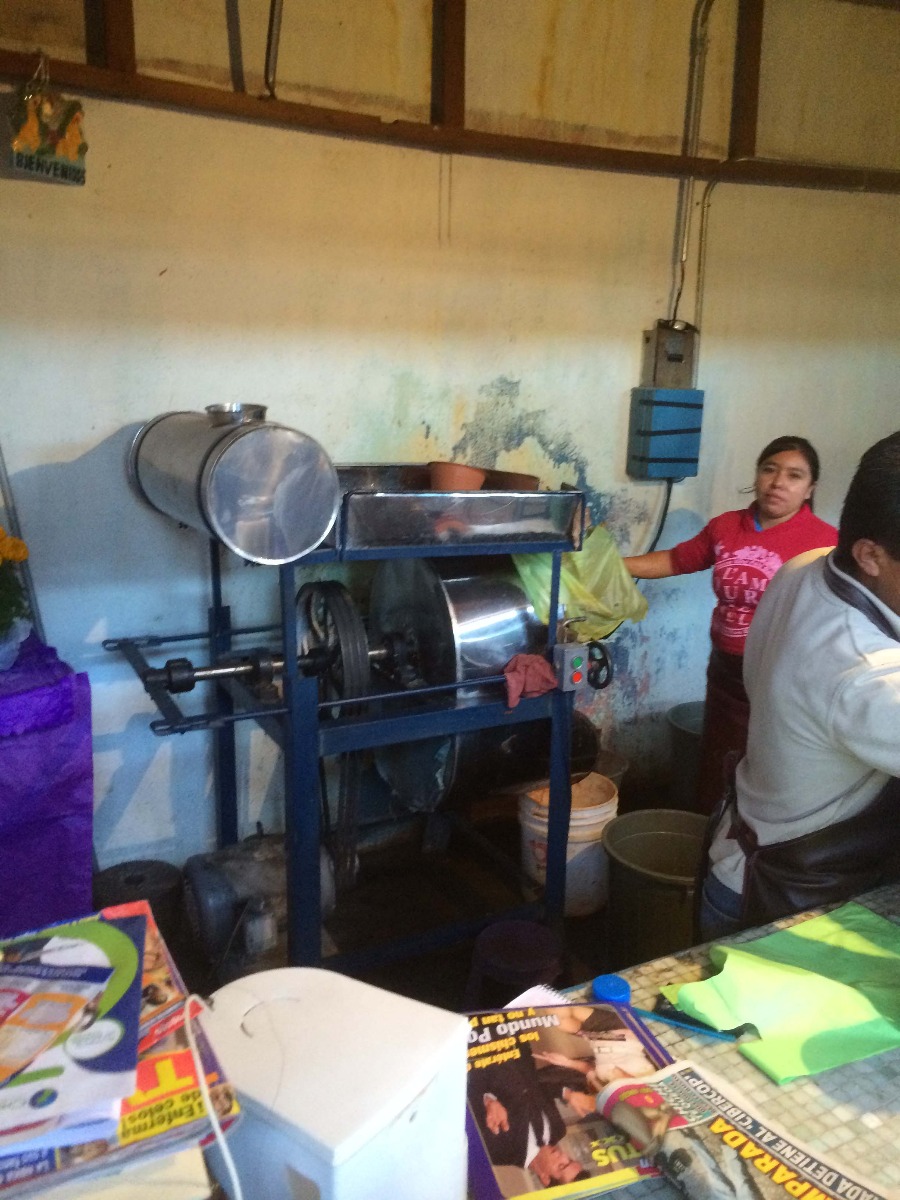 the locals all seem to have their own favourite stall selling mole with just the right blend of sweetness and heat ; grinding chillies for mole in the market

To make mole, dried chillies (ancho, guajillo, perhaps a few pasilla...) are toasted then soaked and ground to a smooth paste which forms the bulk of the sauce. This paste is then mixed together with ground nuts, seeds, herbs and spices to make the mole base, then heated with water or stock to make the sauce. Mole sauce is served over turkey, pork or chicken but the meat itself seems like a bit of an afterthought -  any old bit of stringy chicken seems to be used, it's all about the sauce! 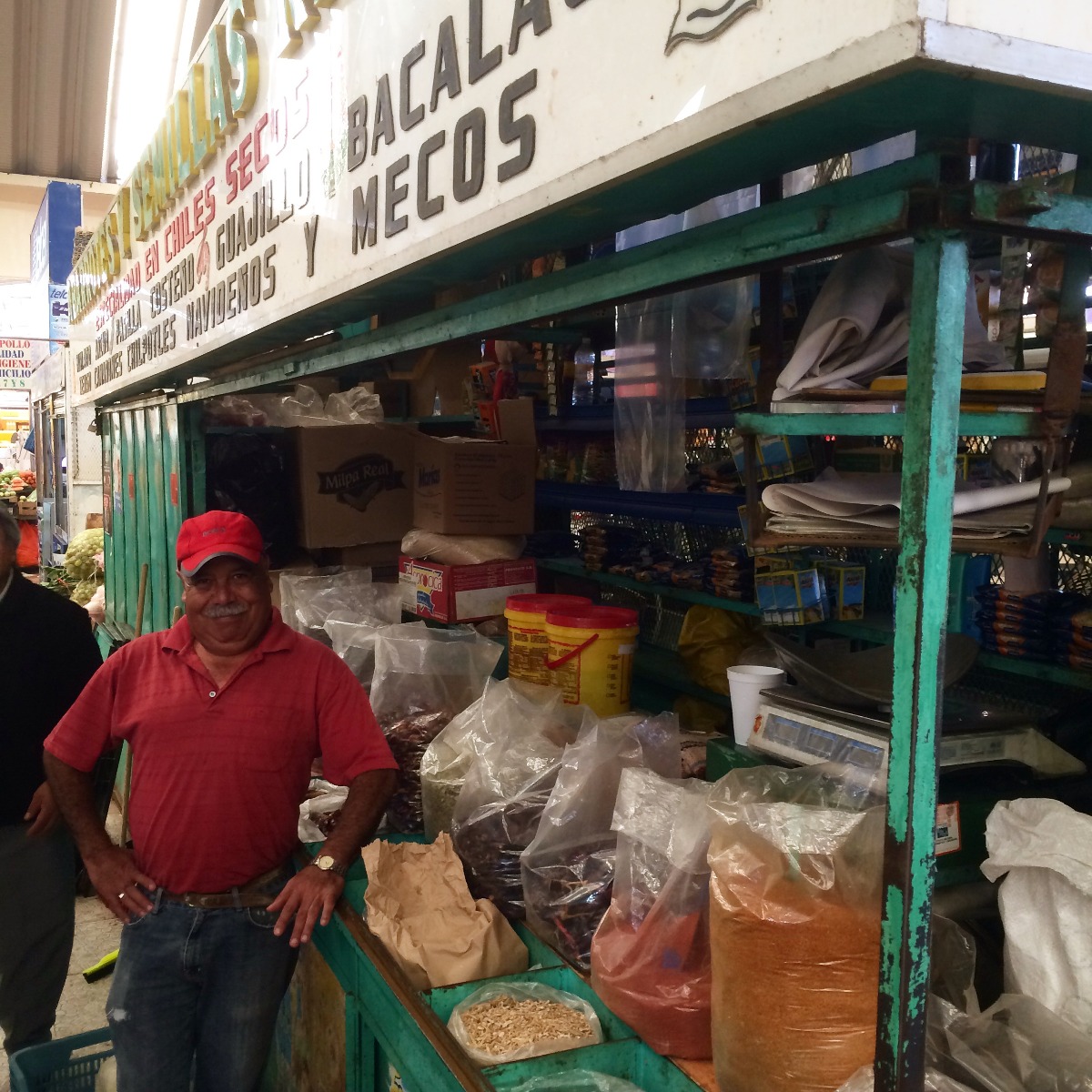 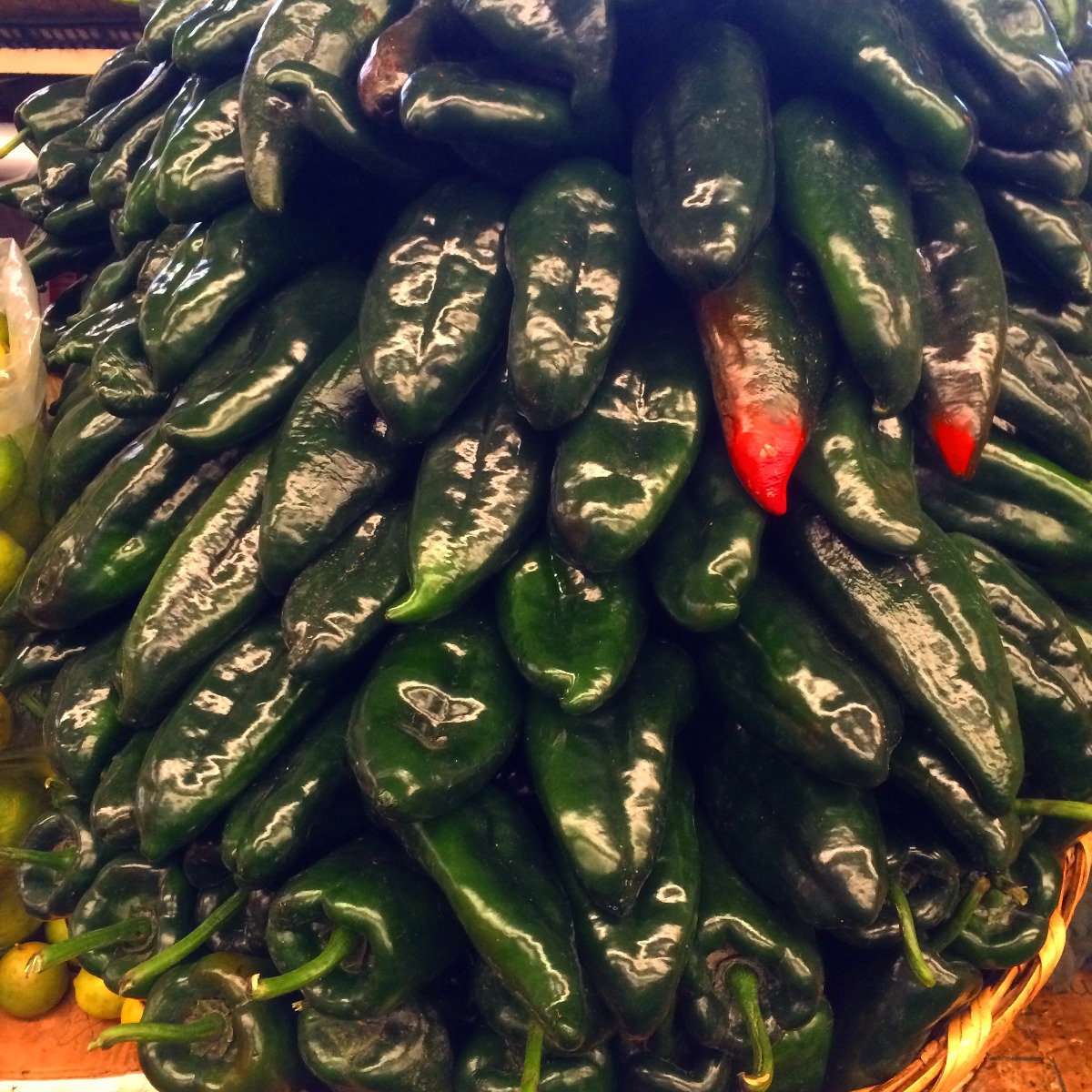 Fresh poblano chillies are often stuffed then baked or fried, but when dried they develop fantastic sweet fruity flavours, are known as ancho and are one of the main ingredients in mole. 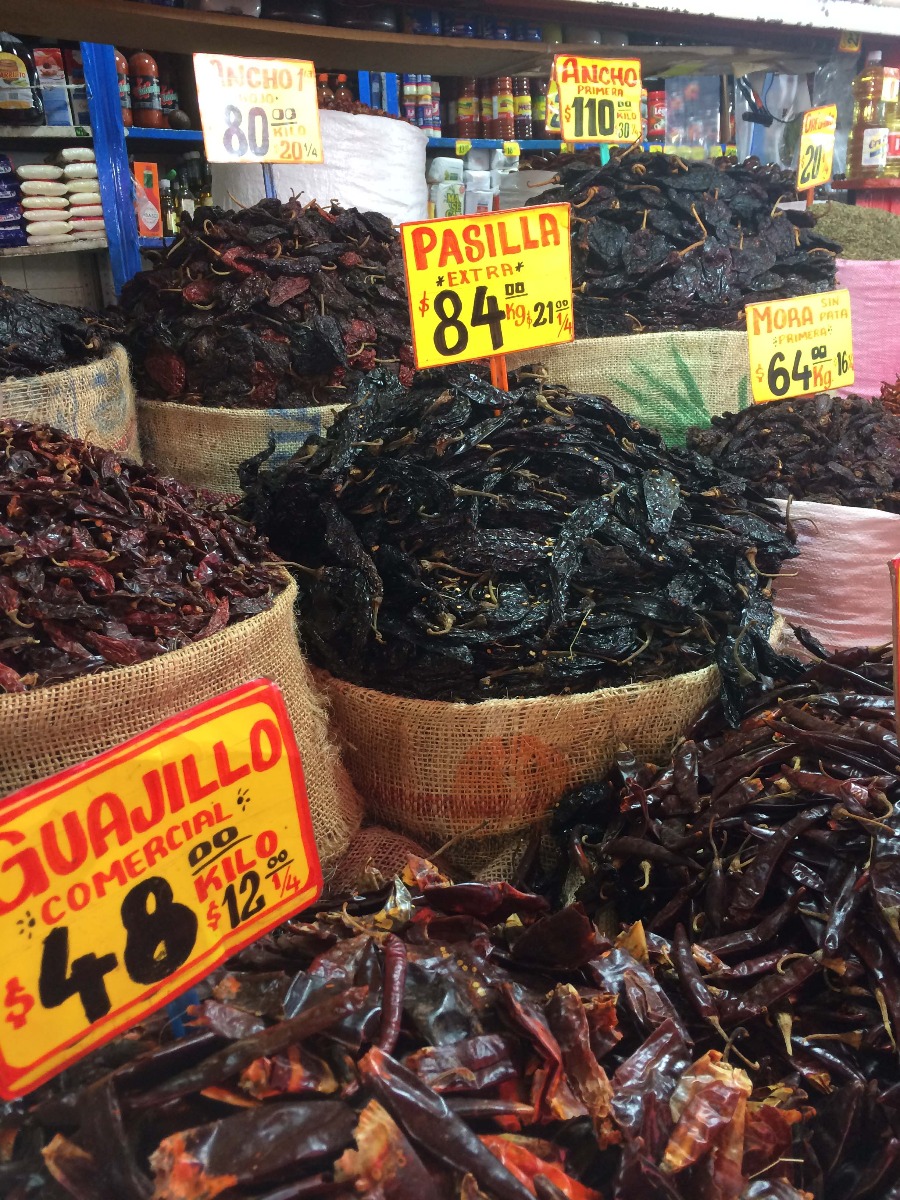 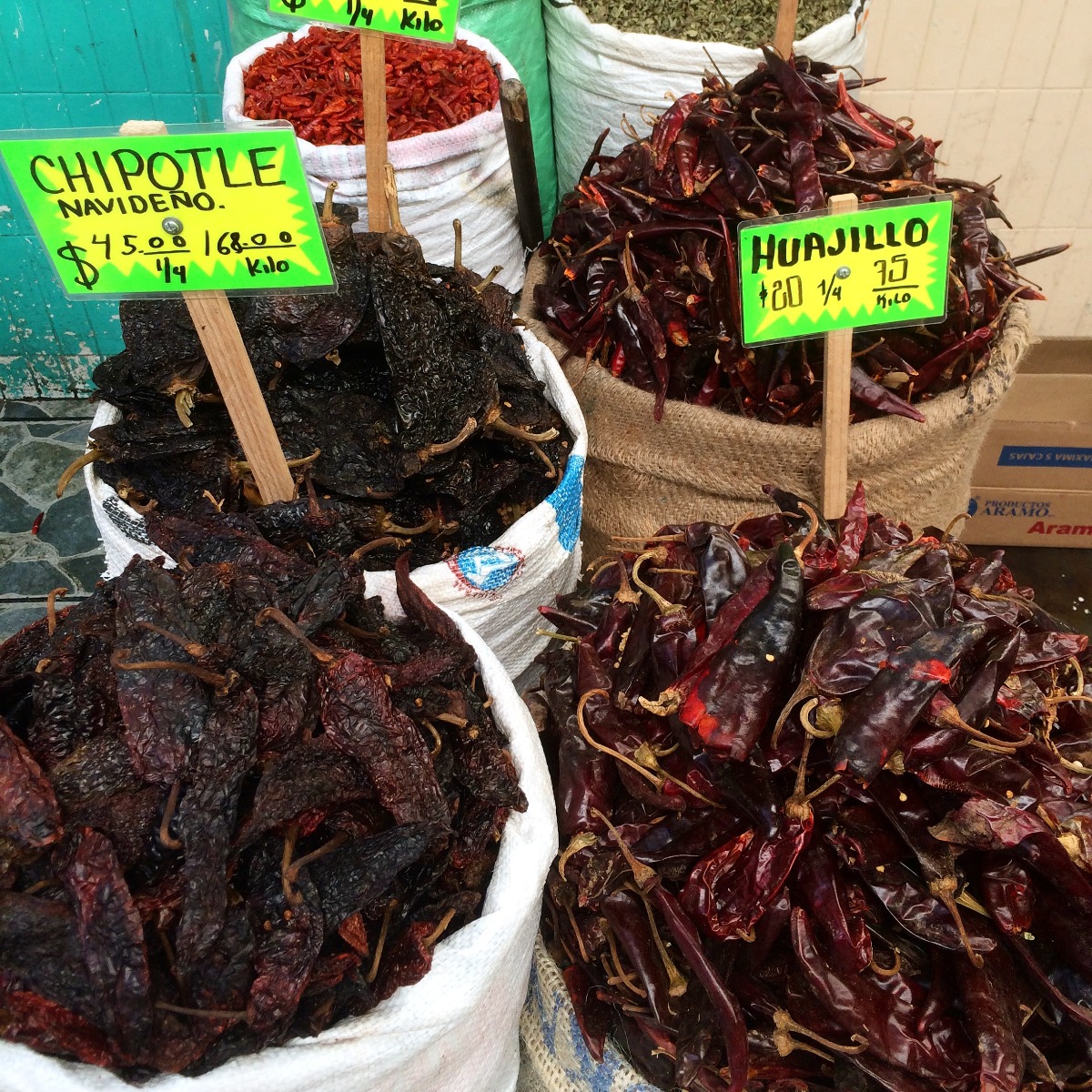 Some of the dried chillies used in mole poblano

Chillies aren't just used as a seasoning here, they're thought of as an ingredient to cook with the same you might with tomatoes or potatoes. They all have interesting and distinct flavours of their own and add body and flavour to sauces and stews but very rarely are they used to add significant heat and many of them are surprisingly mild even to British tastes. As well as all the indigenous ingredients used in mole like chocolate and chillies, cumin and cinnamon are also important flavours and both arrived with the Spanish in the 16th century. It's a bit weird to think of the Spanish introducing spices as they don't tend to use much in their cooking nowadays, but the Moors were in Spain until the end of the 15th Century and it was they who brought cumin, coriander and cinnamon to Spain from the trade routes of Arabia and North Africa. 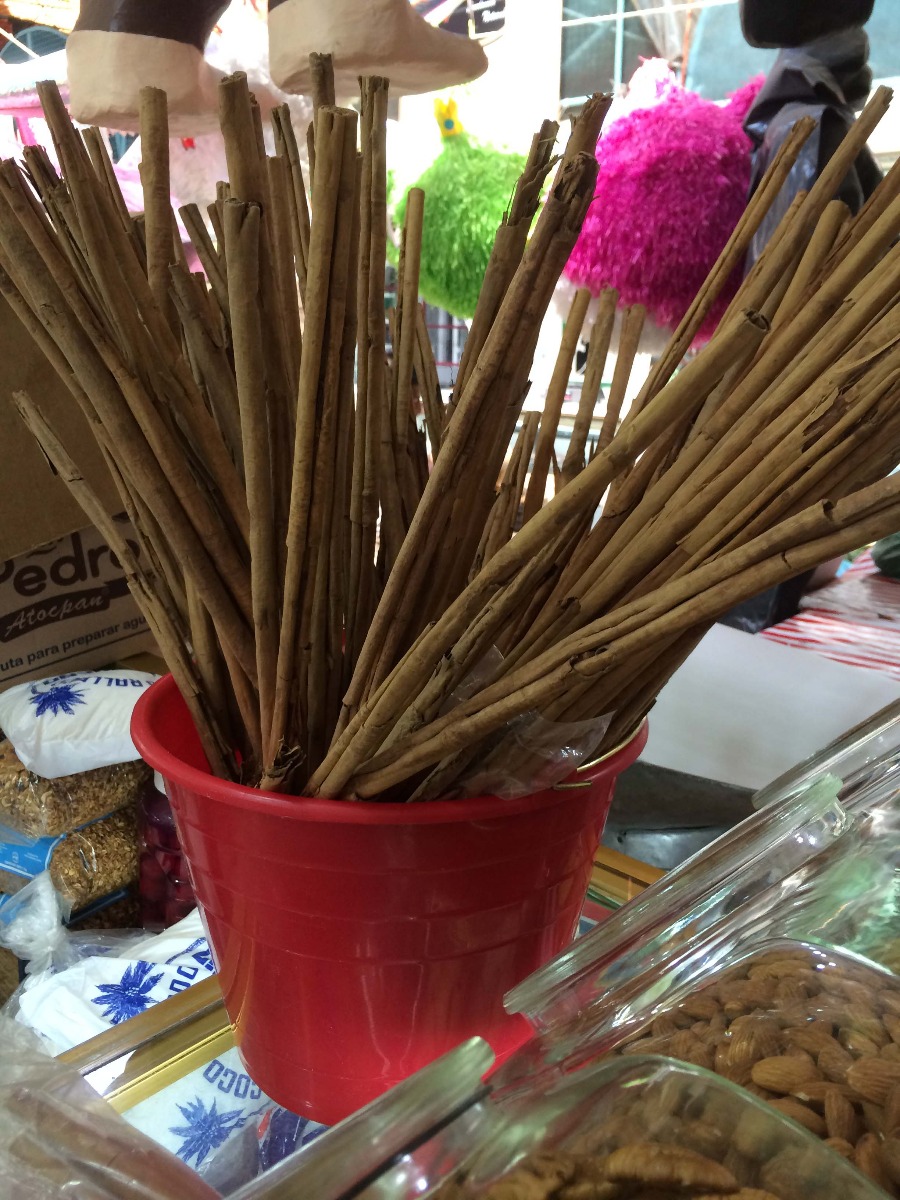 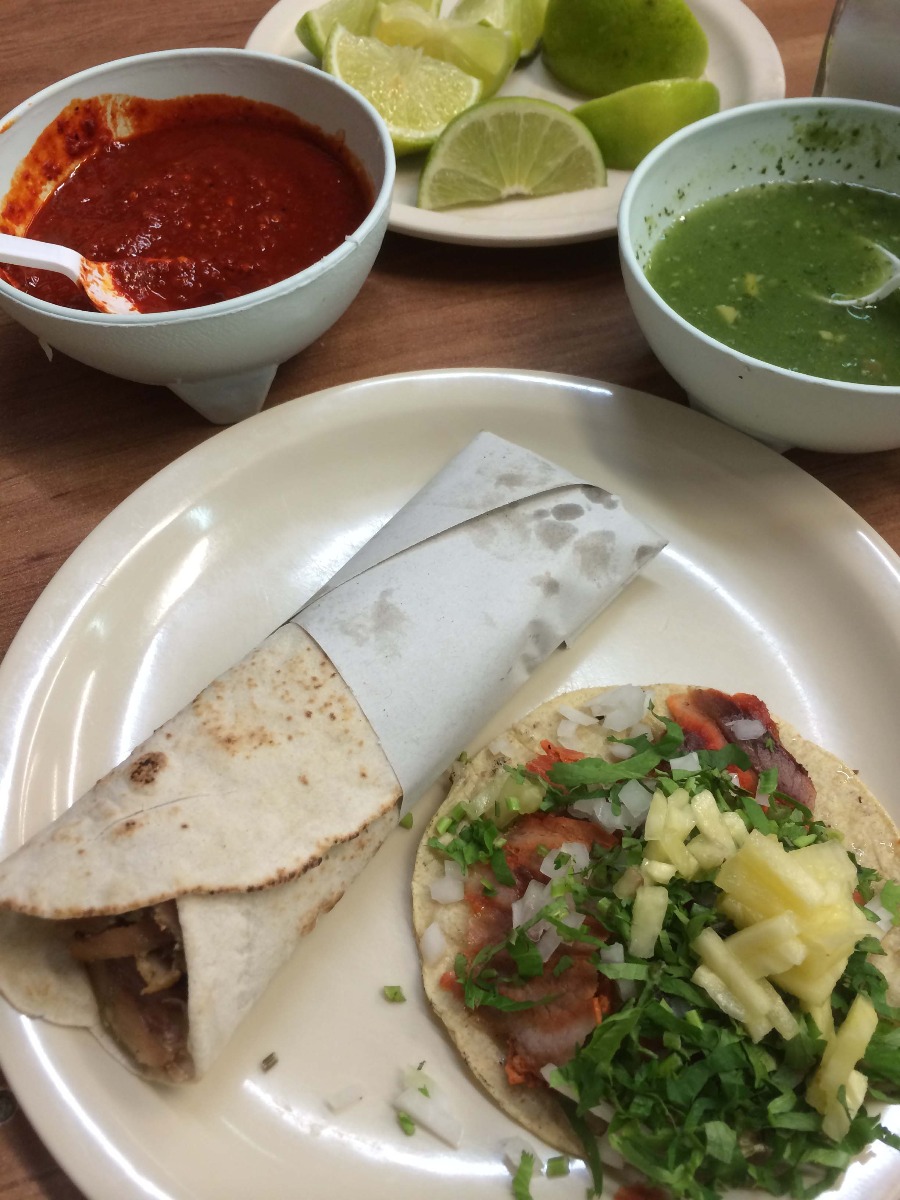 Mexico is now the worlds biggest buyer of Sri Lankan cinnamon, they even have special grades just for the Mexican market (although there's also a lot of what are called 'quillings' which are basically all the broken bits that are swept up off the floor after the cinnamon quills have been made).

There may be a legacy of Moorish Spain in another uniquely Pueblan dish - the Taco Arabe (perhaps the coolest name ever for what's basically a simple kebab). The classic Mexican Taco al Pastor on the right is made with a corn tortilla, the Taco Arabe on the left is made of grilled sliced meat seasoned with cumin all wrapped in a pita bread or Pan Arabe. Just goes to show, the food we often take for granted and assume has always been there can have influences that stretch back centuries and perhaps is still changing and evolving into something even better!