It's hard to think of Indian food without chilli powder but until the Portuguese introduced it in the 16th century the food was seasoned only with the spices that grew locally - pepper, ginger and pipali or long pepper. Long pepper is still used in Ayurvedic medicine and it's a big favourite of ours with its beautiful sweet scent as well as a biting peppery heat, but the arrival of the chilli quickly killed off its use in food because chilli was so much easier to grow and much higher yielding. 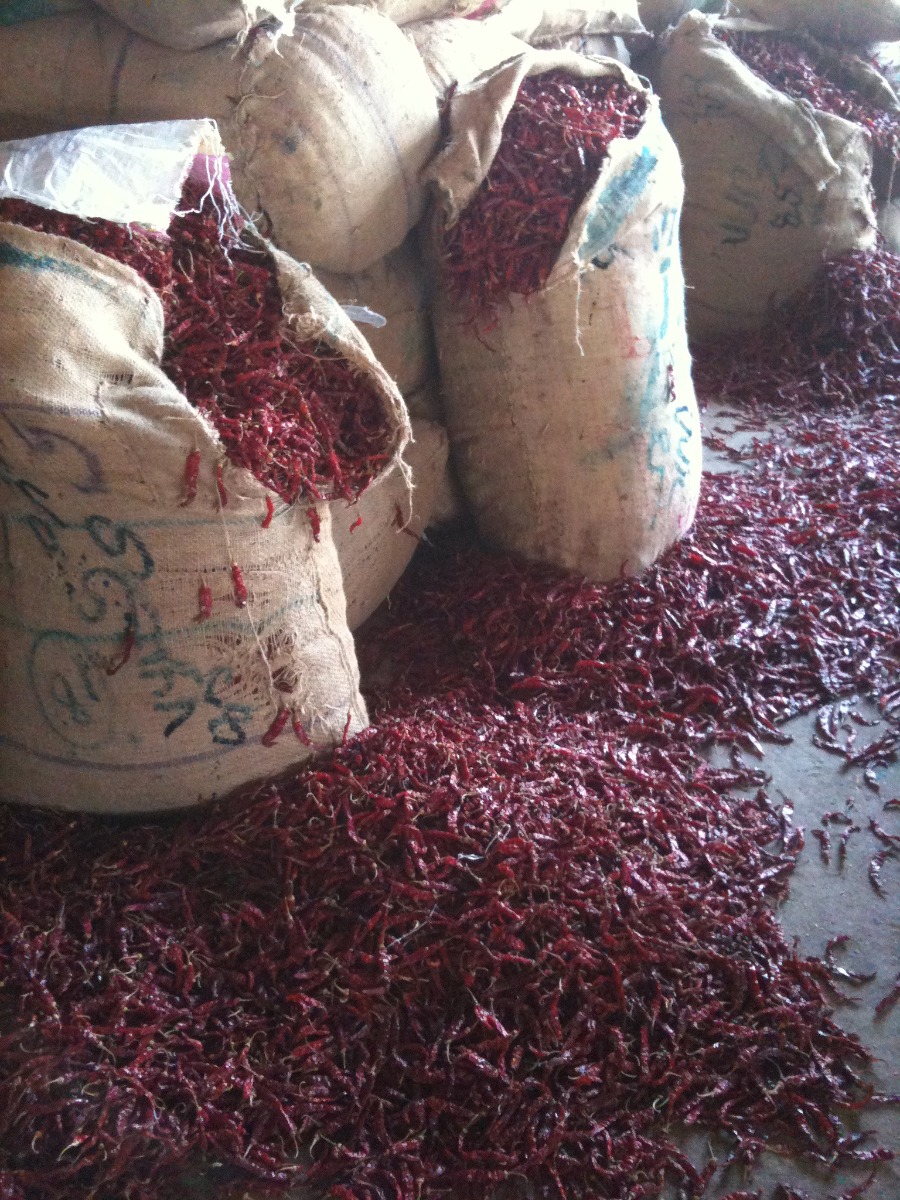 At the peak of the season over 5 million kgs of dried chilli are traded in this market EVERY DAY!!!!!!

I suppose that 400 years is more than enough time for any ingredient to be widely adopted and India now grows and eats more chilli than anywhere else in the world. The centre of all that production is the hot dusty town of Guntur in Andhra Pradesh which is home to the biggest chilli market in Asia (and by some measures, the world!).

It's not much to look at from the outside, just a set of gates off the main Chennai highway but the unbelievably pungent smell in the air gives an obvious clue. Once into the market area it's absolutely jaw-dropping in scale - there must be 30 or 40 huge warehouses with open sides filling a 15 acre plot, all subdivided into smaller sections for individual dealers and within each section are literally thousands of sacks of dried red chillies.

Each morning the traders walk through the market and haggle over the price of each small batch with the dealers who represent the farmers. There's a bit of a pied piper effect as a little band of hopeful farmers, fast talking middlemen and various curious hangers-on follow the big boss - the trader as he walks round and decides what to buy and how much he's prepared to pay. 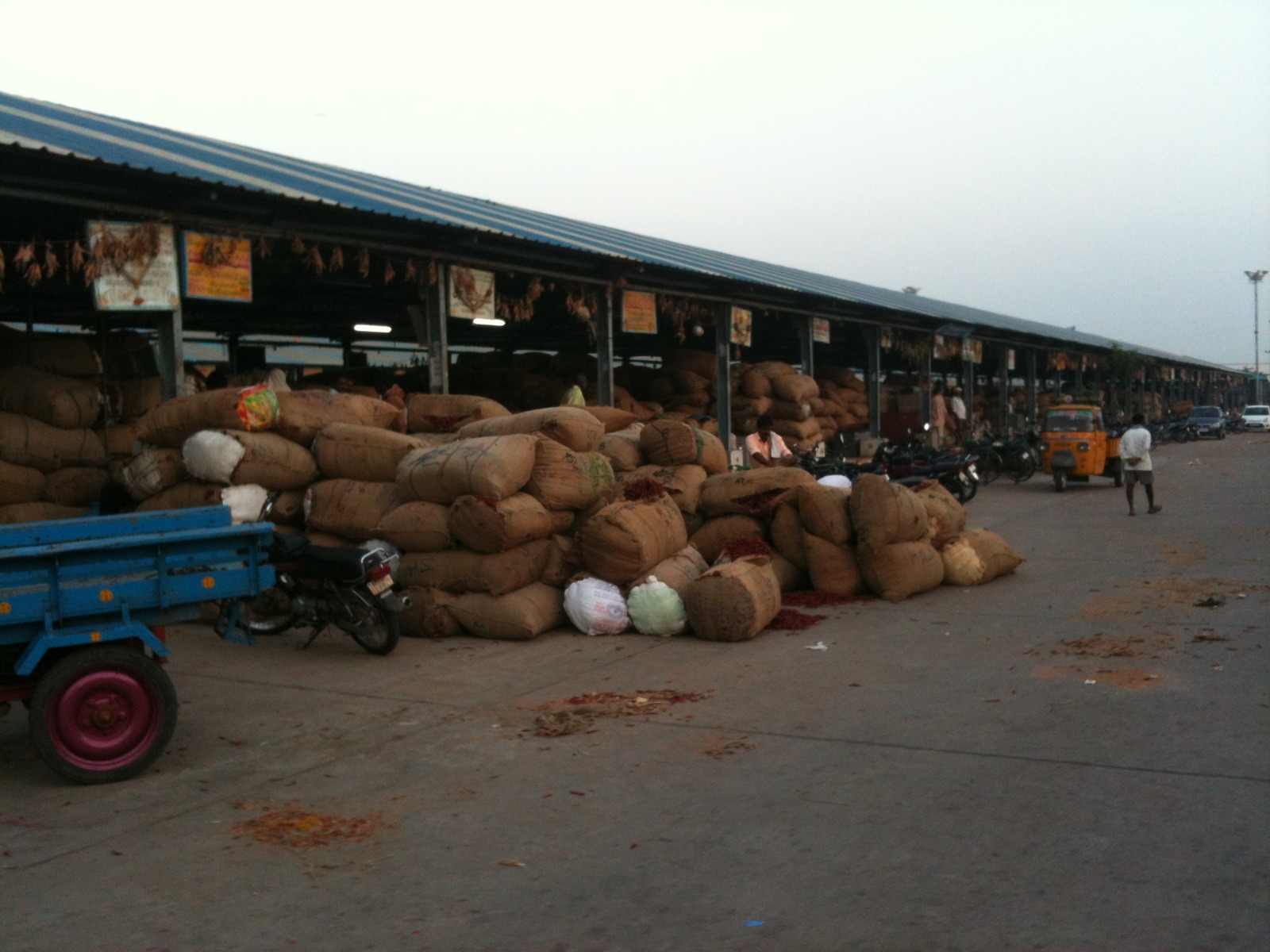 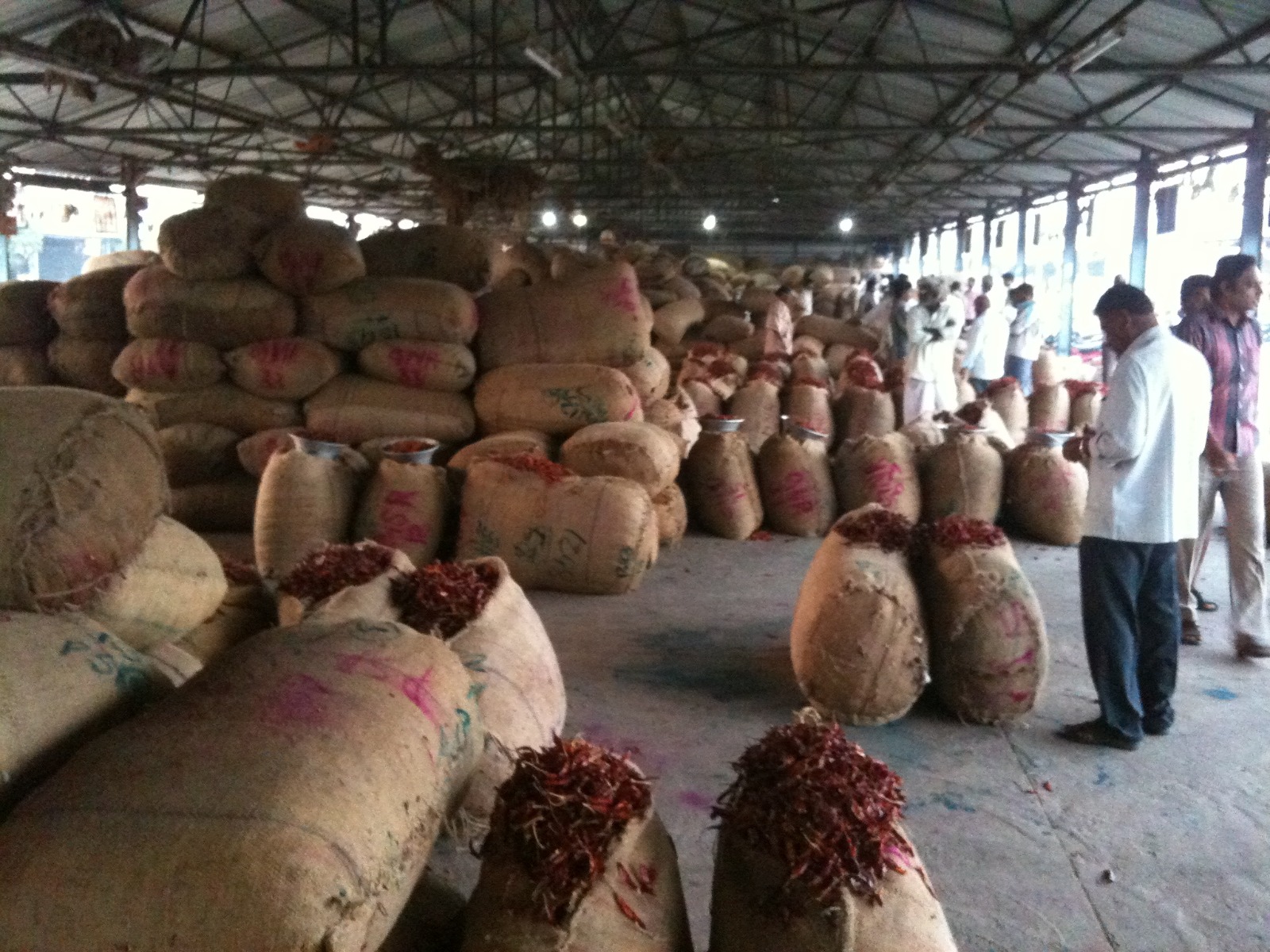 What seems really odd about the whole thing is that there's no auction process, the deals are all made individually and nothing is standardised - all the sacks contain completely different amounts of chillies so I couldn't quite work out how anybody knew how much of anything they were buying but in typically chaotic Indian style it all seems to work out in the end. 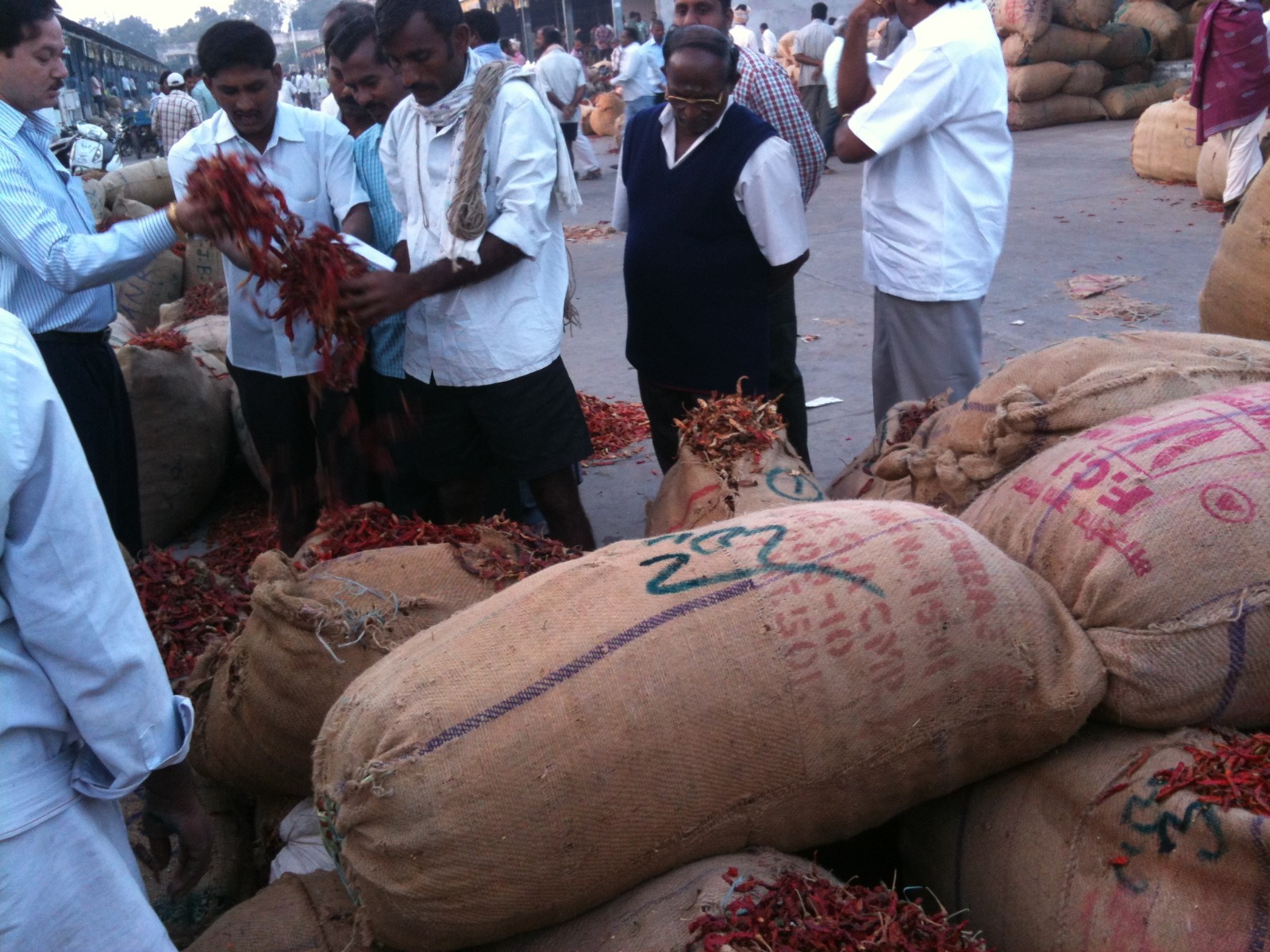 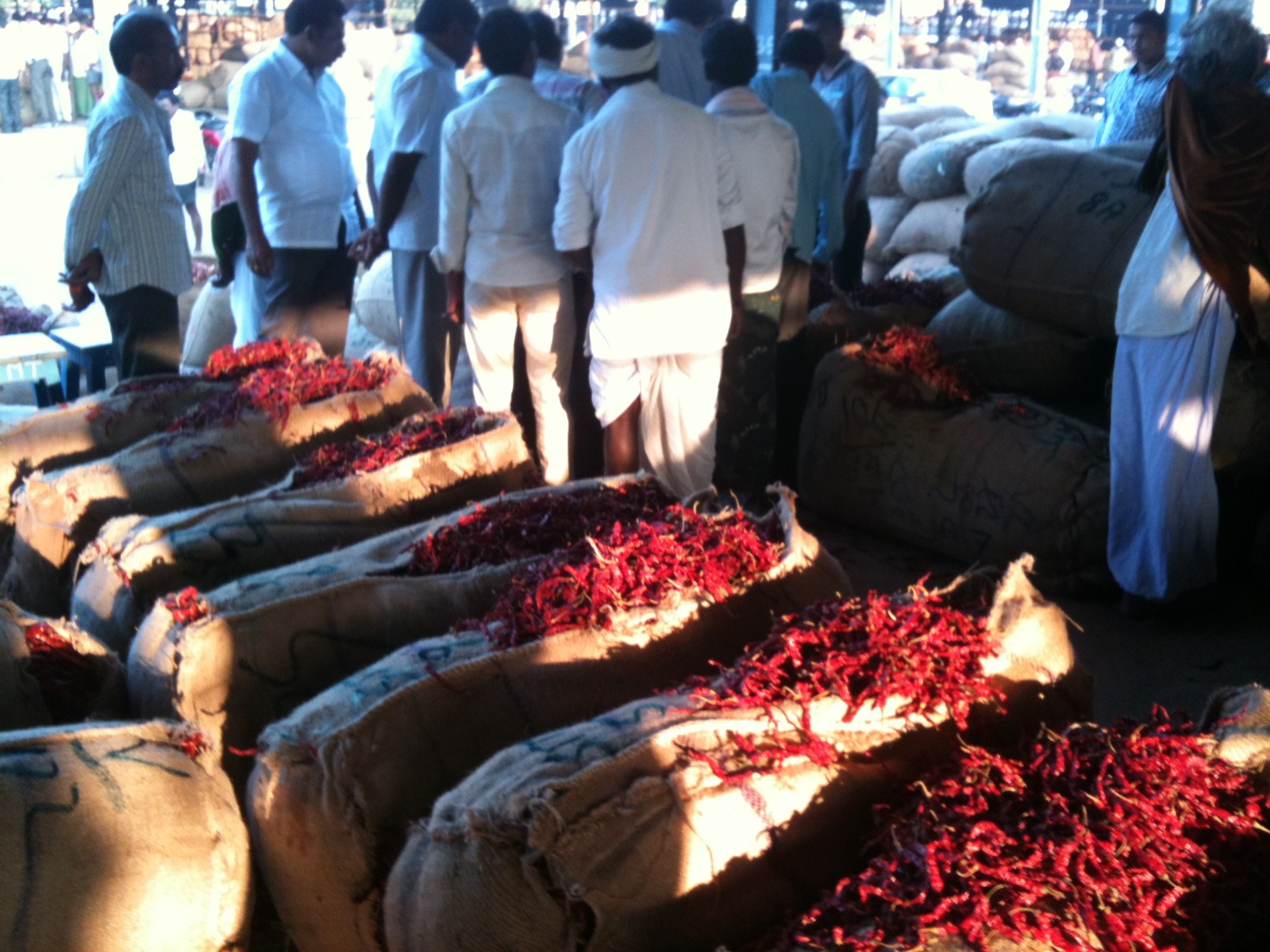 At every stop the sacks are cut open then everyone immediately starts coughing and sneezing due to the fumes. Handfuls of chillies are passed round for inspection, most of which are thrown back on the floor rejected for being too moist, too dry, too light, too dark etc etc Once the trader finally decides to buy a batch, his man paints his initials on the sack and the batch is his. Each small scale farmer grows between 50-200kg in his little plot of land so each days trade can involve batches from hundreds of different farmers who will have travelled long distances to bring their produce to market. 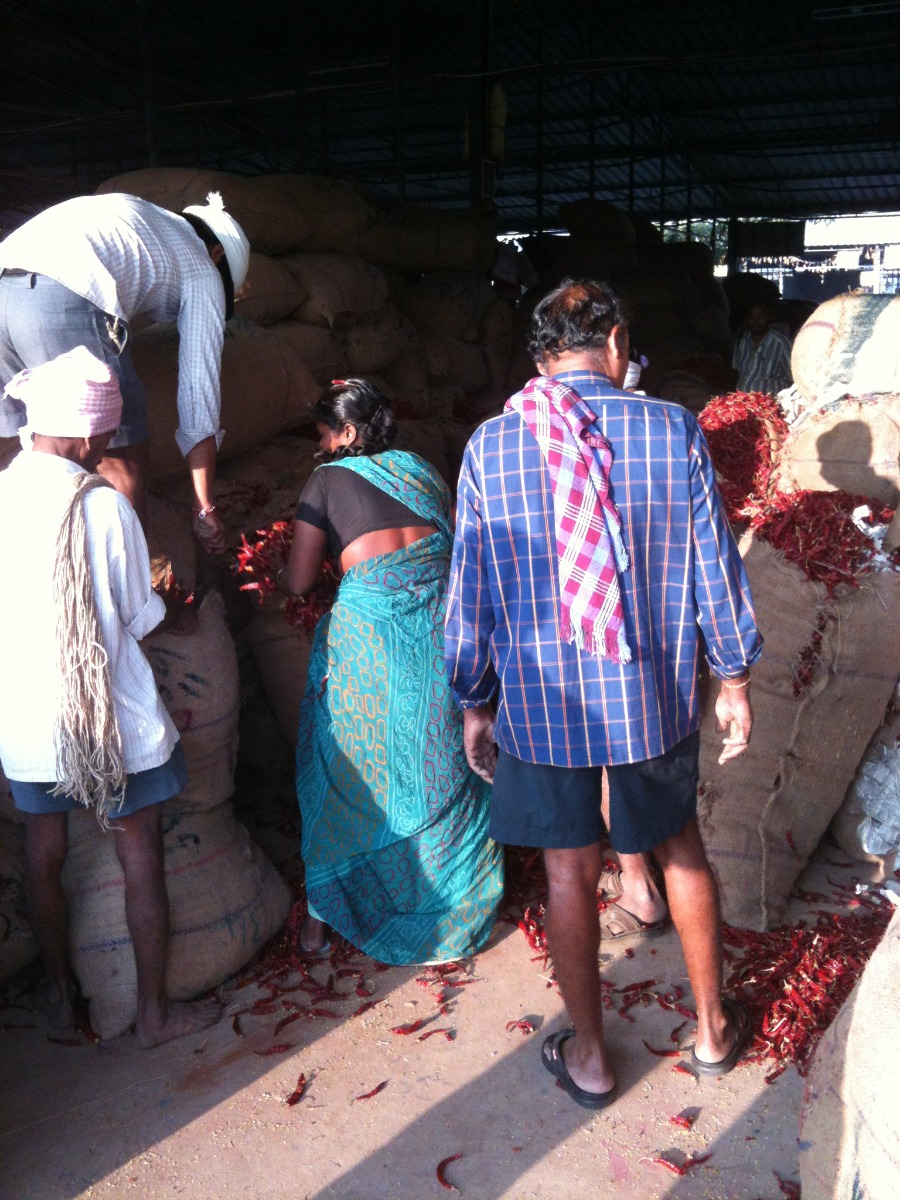 How do you get the sample chillies back in the sack? You stand on them of course until you can sew the sack closed again. In fact not a single seed is wasted, every single flake of chilli is carefully picked up and put back in the sacks to be used

Surrounding the market are huge warehouses where the traders grind the chillies to powder or store the whole chillies until they're needed. As temperatures there can reach 48C in summer, the chillies are kept in cold storage to avoid any deterioration in colour and to protect from mould (which can be a serious problem with all dried chillies).

Drying chillies in the sun outside the warehouse before grinding - it's always a battle between the traders and the farmers as the chillies are sold by weight so any extra moisture in the chillies means more money for the farmer, but potential waste for the traders. 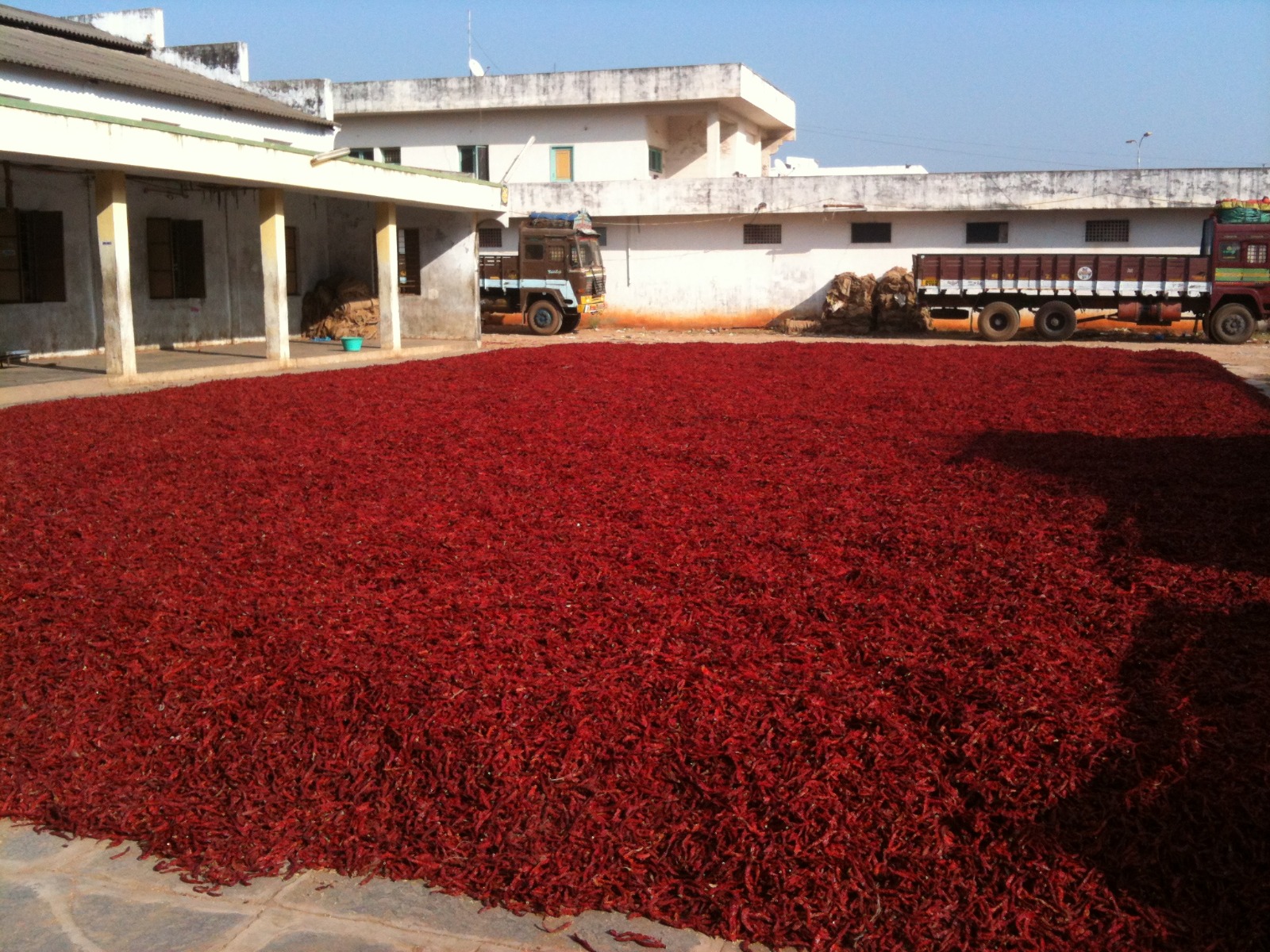 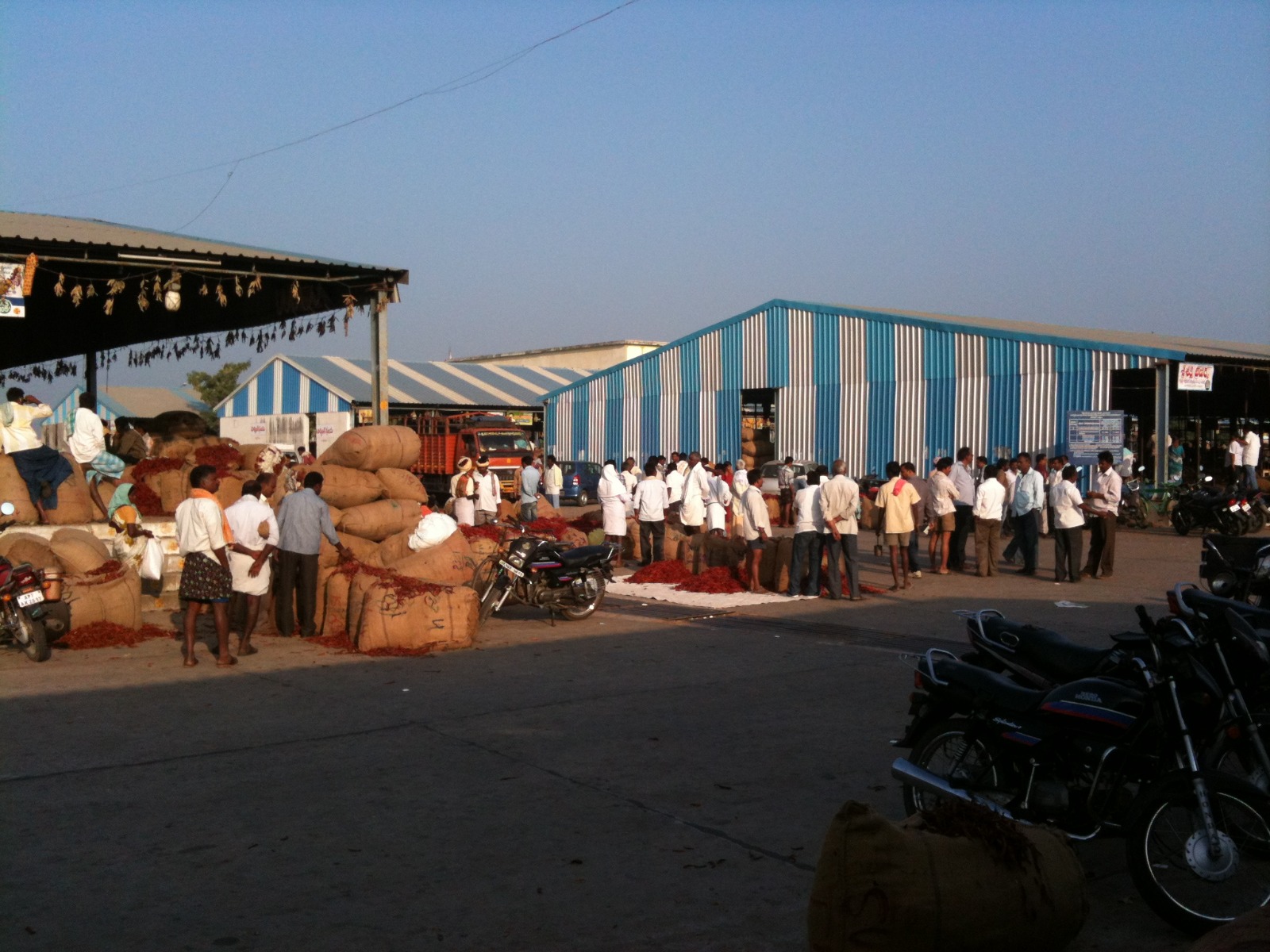 95% of the chillies traded here are ground to powder which is how most Indian cooks use chilli. The cheapest grades which are all used locally contain lots of what's politely called 'white chilli' (basically all the brown and white bits that have lost their colour, any chillies that have been damaged by mould, all the stalks, stems, feathers, stones and mud left in the sacks plus seemingly whatever else gets swept up off the floor). As the scandal over Sudan 1 (an illegal artificial colouring found in chilli powders a few years ago) suggested, its definitely the case that with chilli powder as with most spices, it's worth paying a bit more for better quality. We don't currently buy from this market due to hygiene concerns but having said that, the higher grades made here are extremely good - the care taken to inspect and destem each individual chilli by hand could only be done in India with its low labour costs, and traders take great pride in blending the various chillies to make a consistent and extremely high quality product.

The market is amazing in terms of its scale but to be totally honest, what's actually traded is fairly mundane - the traders obsess over the various types available - byadgi, guntur, 341's, 274's, teja, super 10's, number 5's, nandari's, 334's, Devanoor deluxe etc etc but the truth is that the differences between them are really very small. It always seemed strange to me that Indians are so keen on spices and complex flavours in their cooking, but when it comes to chillies it's enough for them to just be red and hot (and usually both!). There's no grading of the chillies in terms of flavour - heat level and colour are the only criteria anybody is interested in which is a shame as any Mexican will tell you, chillies can have incredible flavours of dried fruit, citrus and much more as well as just heat. 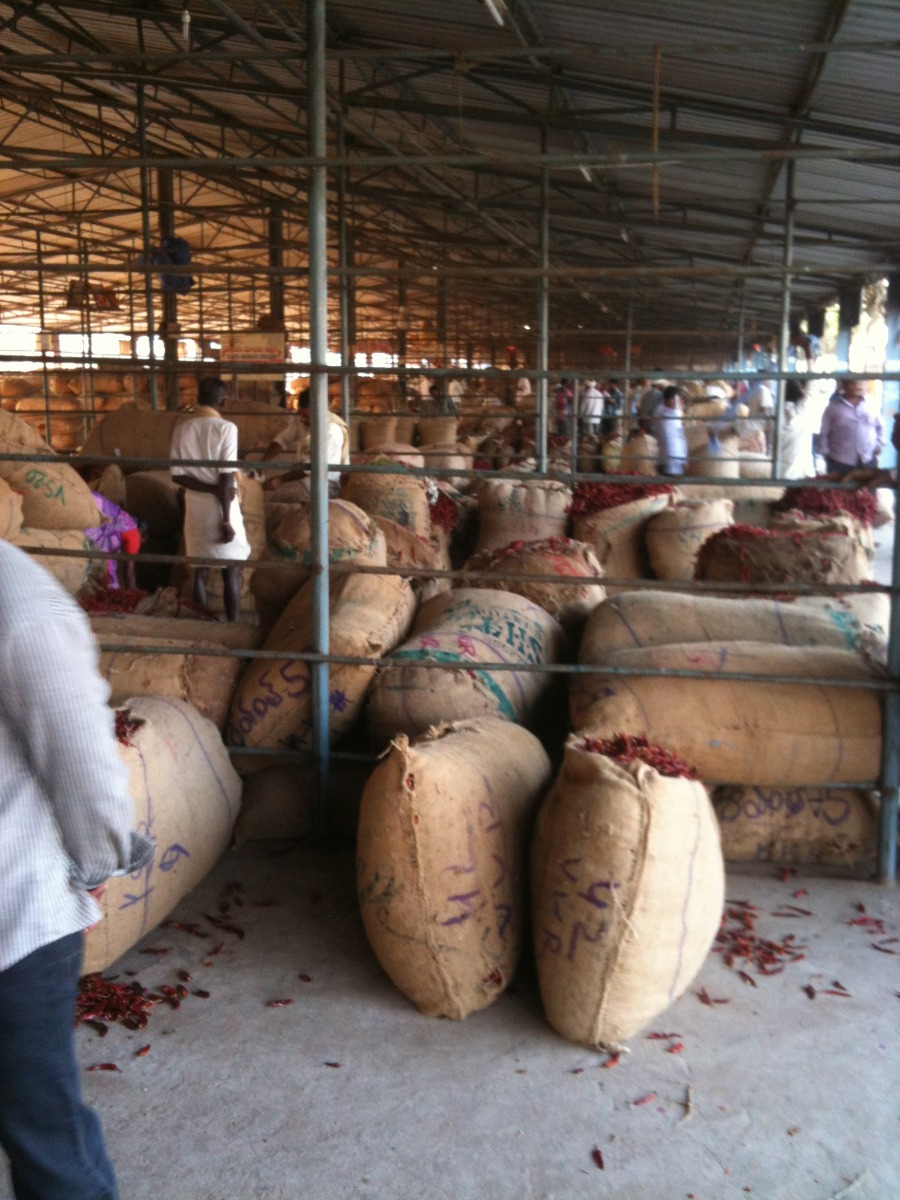 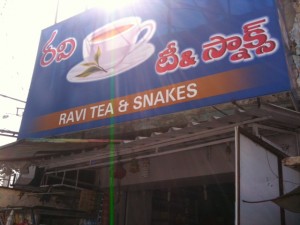 Maybe one day the Spicery will be the ones to introduce India to the full range of flavours the chilli can offer? Either way, it was amazing to get a sense of the scale of the business in India, and to see how these chillies were used in the local food - more on that to follow soon!